The average adult Florida cottonmouth is 30-48 inches (76-122 cm) in total length. This snake is heavy bodied with a pattern of light brown and dark brown crossbands containing many dark spots and speckles. The pattern darkens with age so adults may become uniformly black. The eye is camouflaged by a broad, dark, facial stripe. The color pattern of juvenile cottonmouths is much lighter than in adults, and newborns have a sulfur-yellow tail tip. 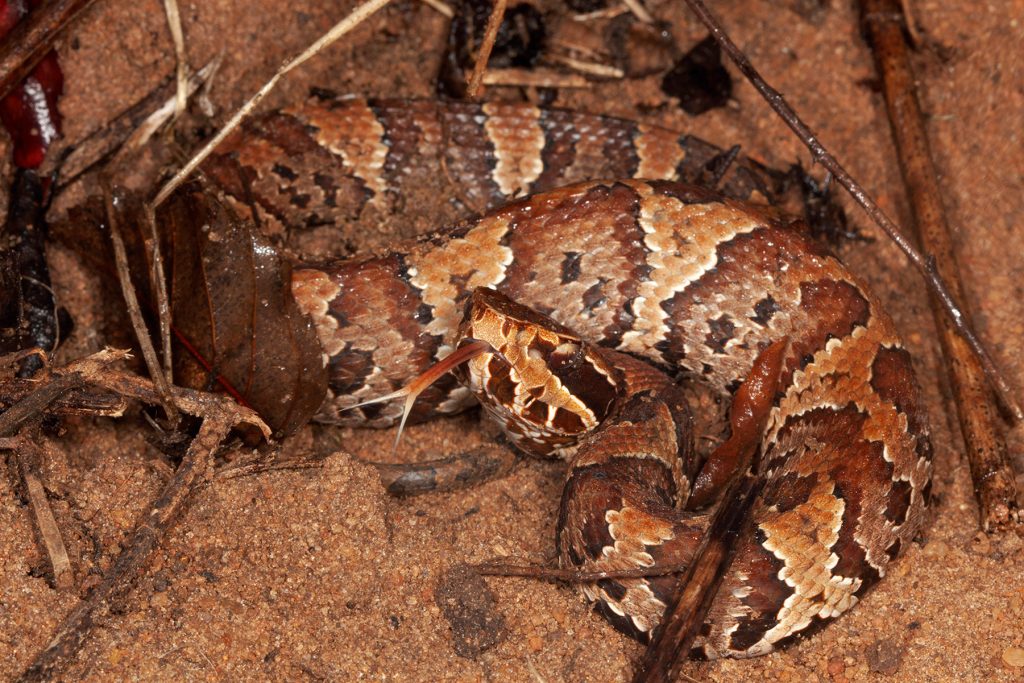 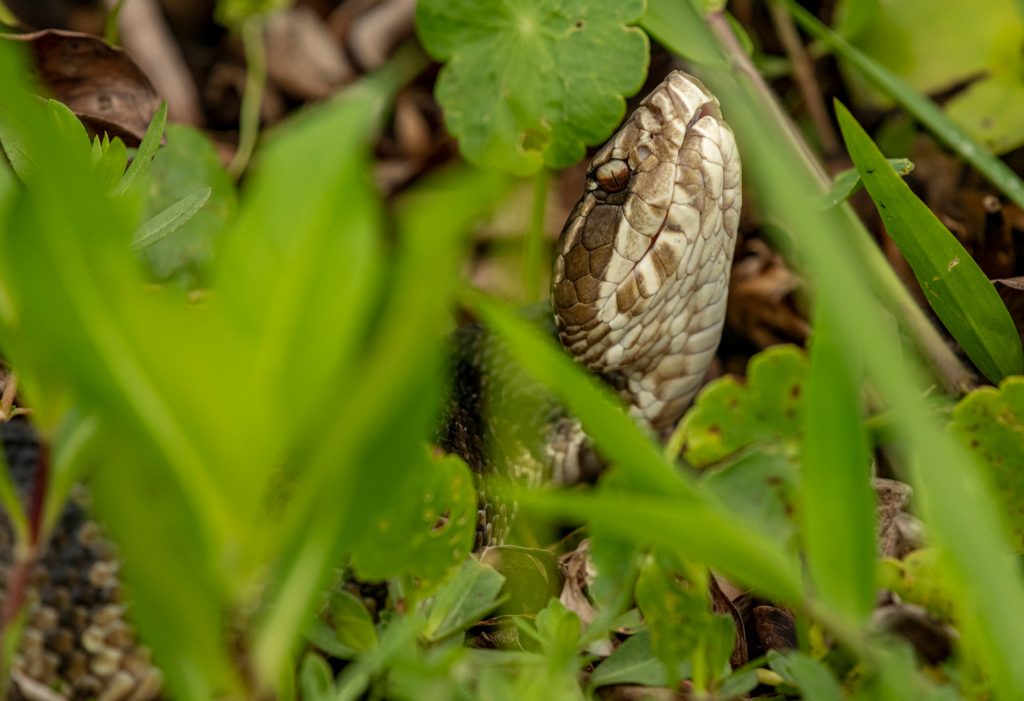 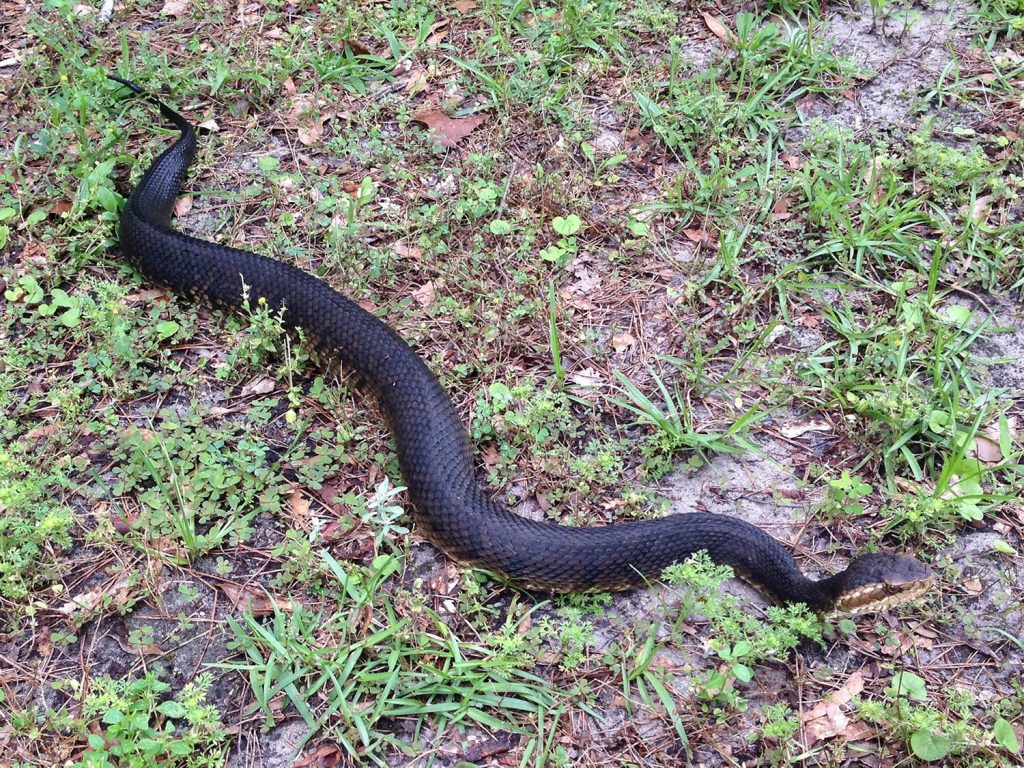 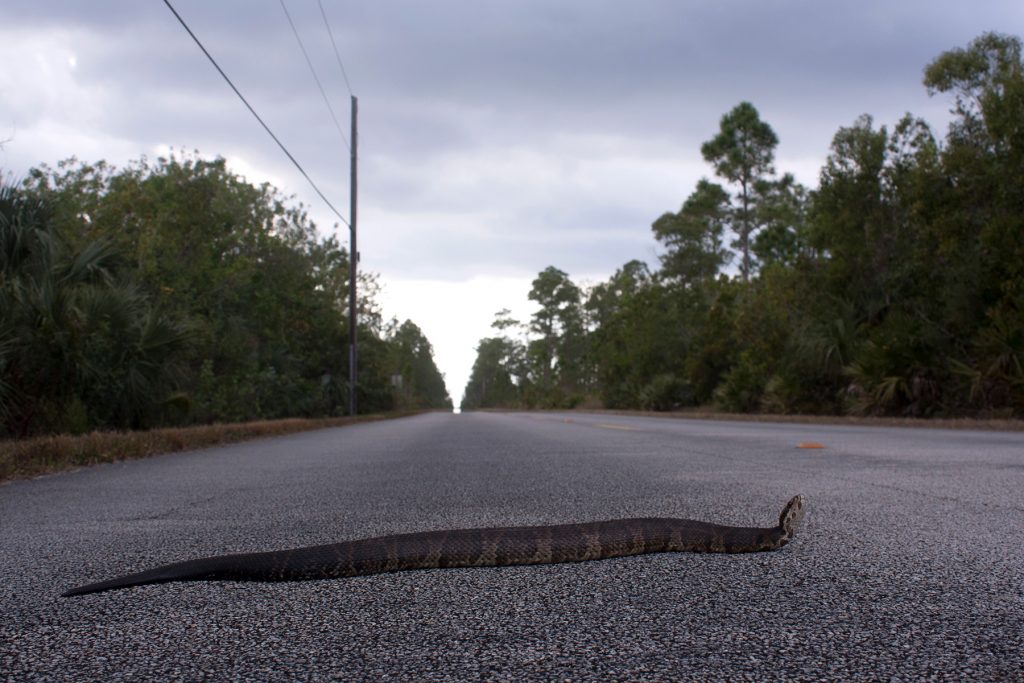 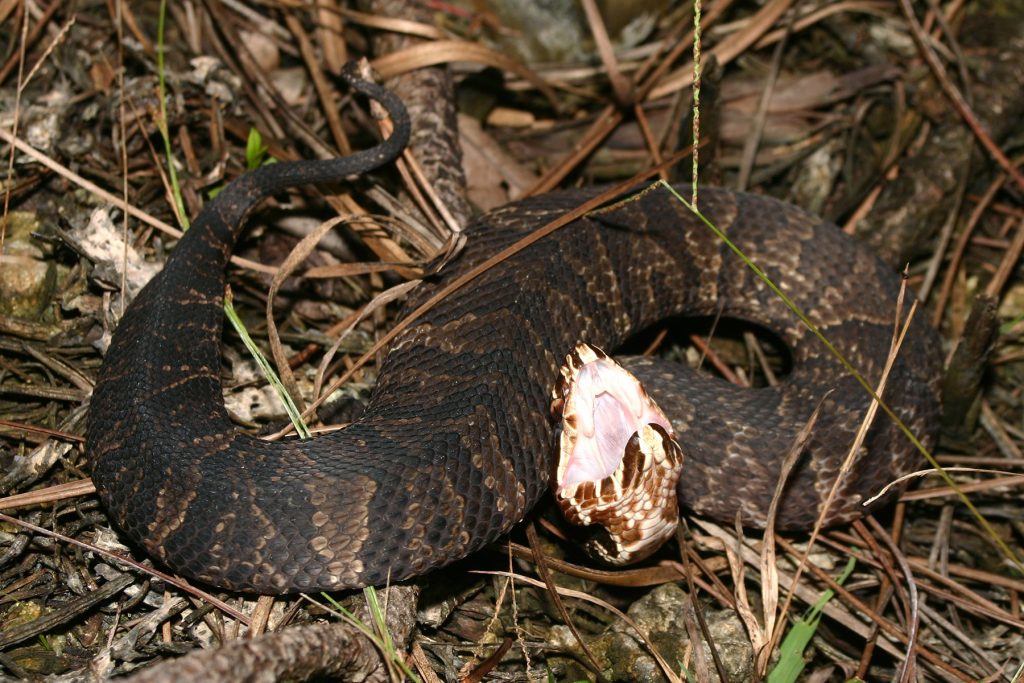 Cottonmouths are found throughout Florida and in every county. They also occur on many nearshore islands including the Upper Florida Keys and several islands in the Gulf of Mexico in Levy (e.g., Cedar Keys) and Franklin (e.g., Dog, St. George, and St. Vincent islands) counties.

VENOMOUS Cottonmouth bites can be very dangerous to people and pets. The victim should seek immediate medical care from a physician or hospital experienced in treating snakebites. Cottonmouths are not aggressive and avoid direct contact with people and pets. Most bites occur when the snakes are intentionally molested or accidentally stepped on.

There are eight species of non-venomous watersnakes (species in the genus Nerodia) in Florida that overlap with cottonmouths in distribution and habitat, and all of them resemble cottonmouths. However, there are some differences you can look for in general to help distinguish cottonmouths from watersnakes:

Eastern Copperhead (Agkistrodon contortrix) Venomous Brightly-colored juvenile Florida Cottonmouths are sometimes mistaken for the Eastern Copperhead (Agkistrodon contortrix), which occurs in Florida only in the Panhandle. The dark crossbands on the body of juvenile cottonmouths have numerous dark spots and speckles, whereas the dark crossbands on copperheads have no dark spots or at most only one. Adult copperheads maintain their juvenile color pattern, whereas adult cottonmouths are typically uniformly dark with very little discernable pattern. Each eye of the copperhead is not obscured by the dark facial band typical of the cottonmouth.

Here is a list of the species of watersnakes in Florida:

The average adult Florida Cottonmouth is 30-48 inches (76-122 cm) in total length, with a record length of 74.5 inches (189 cm). This snake is heavy bodied with a pattern of light brown and dark brown crossbands containing many dark spots and speckles. The pattern darkens with age, so adults may become uniformly black with only a faint pattern. The dorsal scales of the body are keeled (each scale has a prominent raised ridge). The eye is camouflaged by a broad, dark, facial stripe. The top of the head between the eyes is covered with large plate-like scales. The pupil is vertically elliptical (cat-like). There is a deep facial pit organ located between the nostril and the eye. The eyes cannot be seen when viewed from above. The tip of the snout has two dark vertical lines. Juvenile cottonmouths have prominent reddish-brown crossbands on a brown ground color, with dark spots in the dark bands. The color pattern of juvenile cottonmouths is much lighter than in adults, and newborns have a sulfur-yellow tail tip.

Florida Cottonmouths can potentially be found in or near any wetlands or waterway in the state, including springs, rivers, lakes, ponds, saltmarshes, swamps, sloughs, reservoirs, retention pools, canals, and roadside ditches. These snakes often wander far from water and have occasionally been found in bushes and trees. Several of the islands they inhabit contain hydric hammock and lack permanent sources of freshwater.

When threatened, a cottonmouth will usually attempt to retreat. If further agitated, it may respond by coiling its body and opening its mouth to exposed white interior. This behavior is what gave rise to the common name “cottonmouth”. This is not a strike, however, but rather a display intended to scare away a potential threat. If further provoked, these snakes may release foul-smelling musk from glands within the base of the tail and quickly vibrate the tip of the tail to produce a buzzing sound. However, they are not rattlesnakes. Striking is only used in defense as a last resort. Contrary to common folklore, these snakes are not aggressive and do not chase people away.

Cottonmouths are opportunistic generalists that feed on a wide range of prey including insects, fish, frogs, salamanders, small turtles, snakes (including other cottonmouths), lizards, baby alligators, birds, small mammals, and carrion. Populations of cottonmouths living on islands in the Cedar Keys feed primarily by scavenging marine fish carrion dropped by colonial nesting waterbirds. Juvenile cottonmouths have a bright sulfur-yellow tail tip, which they raise and wiggle like a caterpillar to lure prey within striking range. This yellow color fades and the caudal luring behavior typically ceases after about a year.

In Florida, females typically give birth to around 1-20 live young between August and October. Competing males engage in combat dances when trailing females during the breeding season.

Cottonmouths are typically nocturnal, becoming active shortly before dark.  However, they can occasionally be seen active during the day.

Head shape is not a reliable way to identify cottonmouths. Cottonmouths do typically have a large head that is triangular and distinct from the neck, whereas most non-venomous snakes in Florida have smaller and narrower heads. However, many non-venomous snakes will commonly flatten and expand their heads to appear wider and triangular as a defensive behavior. Whether this behavior is due to mimicry is not clear, but it does make head shape unreliable for identification purposes.

Although cottonmouths occur throughout Florida, they are not nearly as abundant as the eight species of harmless watersnakes (species in the genus Nerodia) that occur in much the same habitats. Unfortunately, many watersnakes are killed every year by Florida residents who mistake them for cottonmouths.

The open mouth threat display of cottonmouths has led to the widespread belief that they are aggressive snakes. However, this behavior is entirely defensive. These snakes only want to be left alone and allowed to escape.

According to folklore, cottonmouths lie waiting on tree limbs overhanging water so they can drop into boats. However, this is not true. Furthermore, these incidents are usually cases of mistaken identity. Harmless Brown Watersnakes (Nerodia taxispilota) often bask on tree limbs overhanging the water. When frightened by a perceived threat, such as an approaching boat, they typically escape by dropping off the limb and into the water where they can hide. Occasionally the watersnake’s attempt to flee is too slow and it accidentally falls into the boat instead of the water.