Most adult Brown Watersnakes are about 30-60 inches (76-152 cm) in total length. These stout-bodied snakes are light tan with squarish darker brown blotches down the middle of the back. Dark squarish markings also extend upwards from the belly onto the sides of the body between the blotches on the back. The head is large and distinct from the neck. Juvenile coloration is similar to that described for adults. 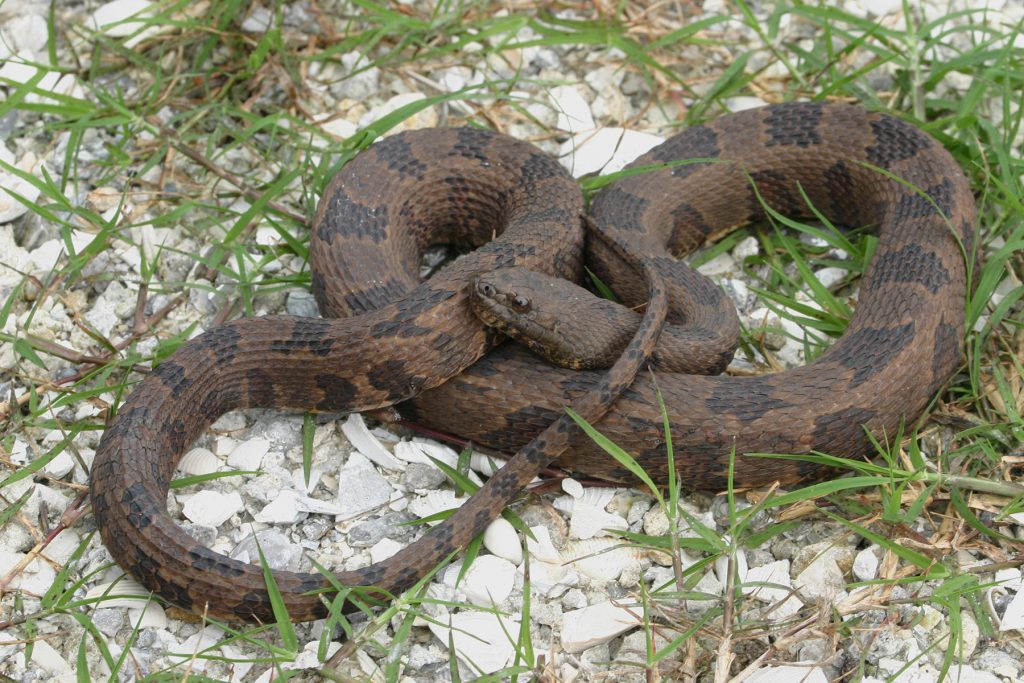 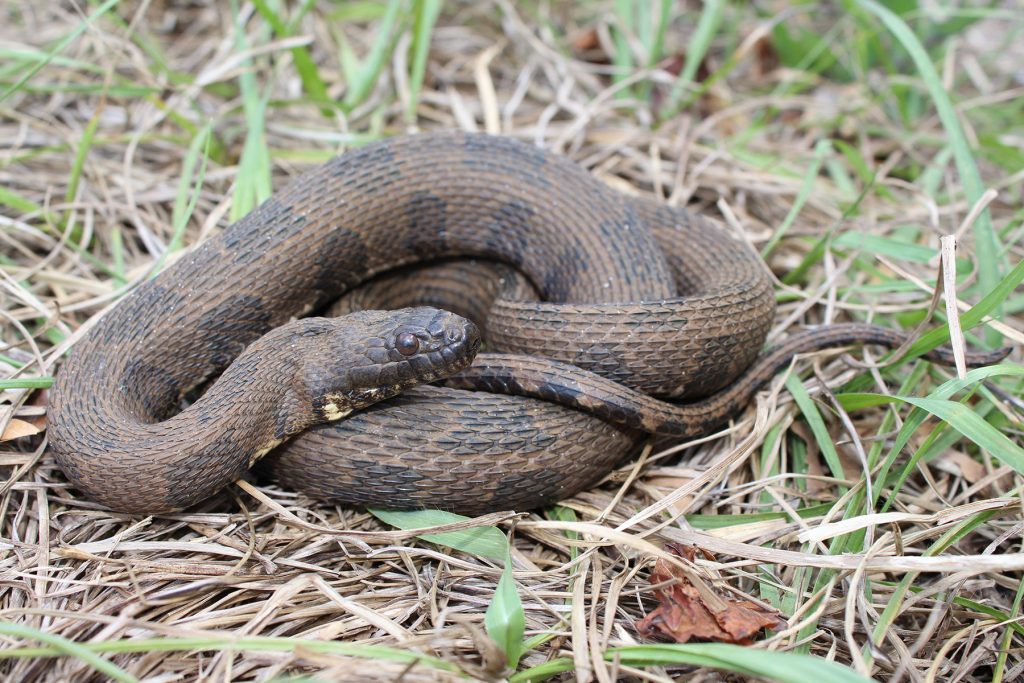 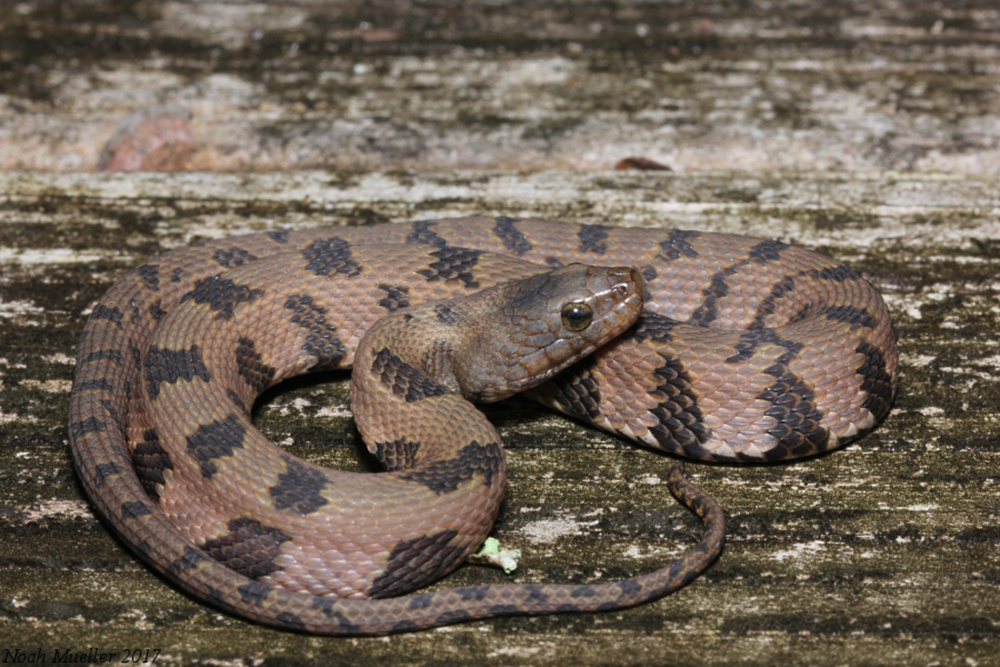 Brown Watersnakes are found throughout mainland Florida in every county. However, they are absent from the Florida Keys.

Non-venomous. Brown Watersnakes are not dangerous to people or pets, but they will readily bite to defend themselves. These snakes are not aggressive and avoid direct contact with people and pets. Virtually all bites occur when the snakes are intentionally molested.

Saltmarsh Watersnake (Nerodia clarkii) Non-venomous Saltmarsh Watersnakes often have several dark stripes running down the entire or partial length of the body, and they are usually only found along the coast in saltwater and brackish habitats.

Midland Watersnake (Nerodia sipedon pleuralis) Non-venomous Midland Watersnakes have fewer than 30 darker brown crossbands near the neck, which break up into alternating blotches further down the body, and the belly is yellowish marked with two rows of half-moons.

Southern Watersnake (Nerodia fasciata) Non-venomous Southern Waternsnakes have broad black, brown, or red crossbands (often bordered with black) down the back and a dark stripe that extends from the eye to the angle of the jaw.

Most adult Brown Watersnakes are about 30-60 inches (76-152 cm) in total length, with a record length of 69.5 inches (176.6 cm). These stout-bodied snakes are light tan with darker squarish brown blotches down the middle of the back. Dark squarish markings also extend upwards from the belly onto the sides of the body between the blotches on the back. The belly is light-colored with darker blotches and half moons. The scales are strongly keeled (each scale has a prominent raised ridge), and there are 25-33 dorsal scale rows at midbody. The head is large and distinct from the neck, and the pupil is round. Juvenile coloration is similar to that described for adults.

In Florida, Brown Watersnakes are commonly found in rivers, cypress strands, sawgrass prairies, swamps, lakes, ponds, canals, and flooded stands of melaleuca. Adults and juveniles of this species are occasionally found in suburban neighborhoods where development encroaches into favorable habitats.

When approached, Brown Watersnakes will typically flee into the water and dive below the surface. If grabbed or pinned, they will typically bite the attacker and release a foul-smelling musk from a pair of glands in the base of the tail. Nonetheless, these snakes are not aggressive, and striking is only used in defense as a last resort.

Brown Watersnakes feed almost exclusively on freshwater fishes, especially catfishes. These snakes are not constrictors and overpower their prey by grabbing it in their jaws, hauling it to shore, and swallowing it after it has been subdued. Brown Watersnakes are typically diurnal (active during the day) during the spring and fall, but they become more active at night during the hot summer months.

In Florida, females typically give live birth to 4-61 young in late summer or early fall.

Brown Watersnakes are excellent climbers and can be found 20 feet up in trees, though they are most frequently seen basking on tree limbs that extend over the water. When frightened by a rapidly approaching boat, these snakes will escape by jumping off the limb into the water. Occasionally their attempts to flee come too late and they fall not into the water but into the boat.

Unfortunately, many watersnakes are killed every year by Florida residents who mistake them for cottonmouths. Although cottonmouths occur throughout Florida, they are not nearly as abundant as the eight species of harmless watersnakes (species in the genus Nerodia) that occur in much the same habitats. If you see a snake in or near the water, most likely it is a harmless watersnake, and it is best for everyone involved to simply leave it alone.