Most adult Saltmarsh Snakes are about 15-30 inches (38-76 cm) in total length. Color patterns of these snakes are extremely variable. Adults can be gray, grayish-olive, brown, tan, or rusty orange, with variable patterns of dark stripes or bands down the body. However, some individuals may lack stripes entirely, and some individuals may be almost entirely black. Juvenile coloration is similar to that described for adults. 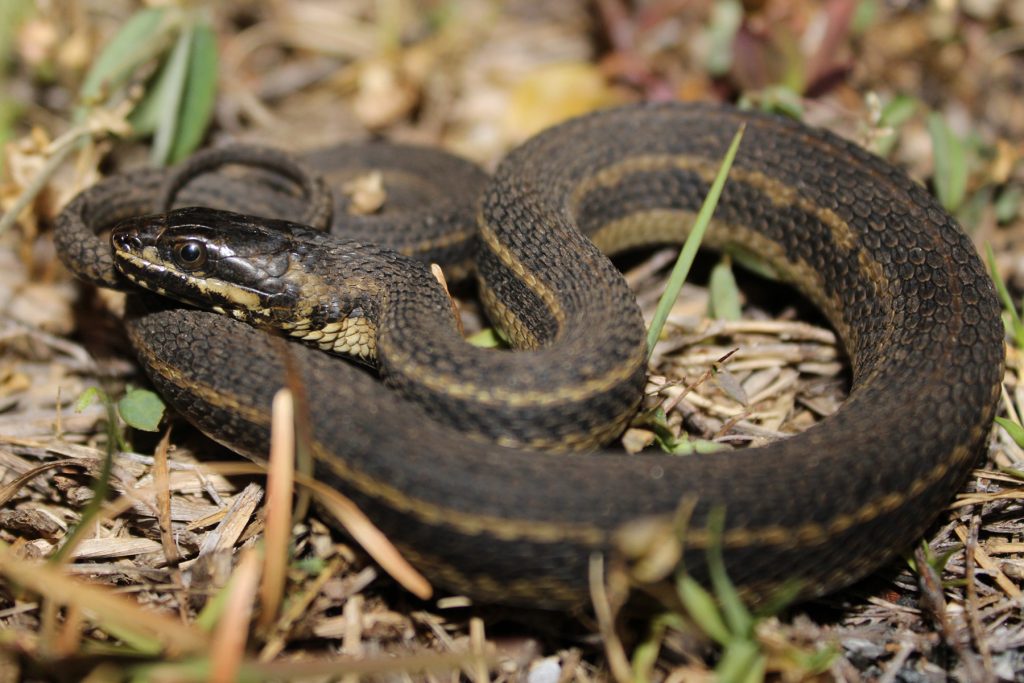 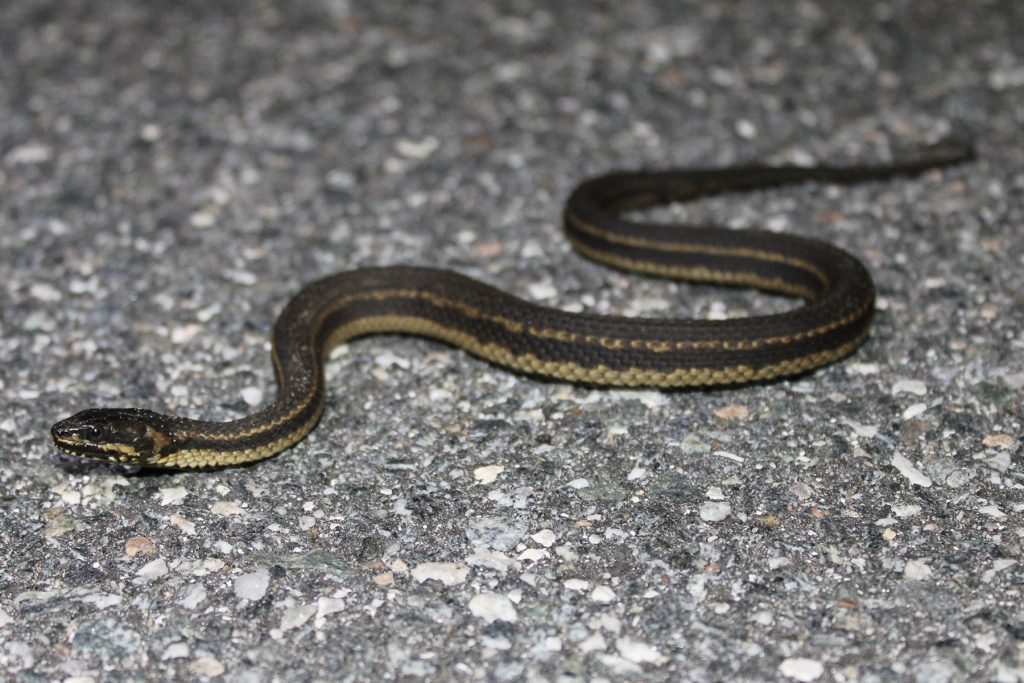 In Florida, these snakes occur along most of the coastal perimeter of the state from Volusia to Martin Counties, from Broward County west to Gulf County, and in Santa Rosa and Escambia counties. They are also found throughout the Florida Keys and on most barrier islands around the state. Among the coastal counties, the Florida Museum does not contain vouchered records of saltmarsh snakes from Nassau, Duval, Saint Johns, Flagler, Palm Beach, Bay, or Walton counties.

Non-venomous. Saltmarsh Snakes are not dangerous to people or pets, but they may bite to defend themselves. These secretive and generally docile snakes are not aggressive and avoid direct contact with people and pets. Virtually all bites occur when the snakes are intentionally molested.

Southern Watersnake (Nerodia fasciata) Non-venomous Southern Watersnakes have broad black, brown, or red crossbands (often bordered with black) down the back and a dark stripe that extends from the eye to the angle of the jaw. Furthermore, they almost exclusively live in freshwater habitats.

Most adult Saltmarsh Snakes are about 15-30 inches (38-76 cm) in total length, with a record length of 36.7 inches (93.3 cm). Color patterns among and within several regions in Florida are highly variable. Adults can be gray, grayish-olive, brown, or rusty orange with faint darker bands. These snakes often have four dark stripes down the body, two on each side. However, some individuals may have dark stripes on part of the body that fade to bands or blotches, and some individuals may lack stripes entirely. Some individuals may be almost entirely black. The belly can be reddish-brown on rusty orange individuals, gray on olive-gray individuals, tan on brownish individuals, or mostly black with a central row of light spots on black-colored individuals. The belly may have 1 or 3 rows of light spots, and there may be dark stripes on the neck. The scales are keeled (each scale has a prominent raised ridge), and there are 21-23 dorsal scale rows at midbody. The pupil is round. Juvenile coloration is similar to that described for adults.

Saltmarsh Snakes are primarily found in coastal habitats such as tidal marshes, mangroves, and mud flats in both saltwater and estuarine areas. These snakes can frequently be found hiding in tidal wrack along the shoreline and they often inhabit crab burrows in the sand or mud.

When approached, Saltmarsh Snakes may either flee for shelter or, more commonly, remain motionless to avoid detection. If grabbed or pinned, they may bite the attacker and release a foul-smelling musk from a pair of glands in the base of the tail. However, these snakes are generally more docile than many other species of watersnake, and it is common for them to not bite or musk at all in defense when captured.

Saltmarsh Snakes are typically nocturnal (active at night) and feed almost exclusively on small fishes, which they catch in shallow water. However, they occasionally feed on small frogs and fiddler crabs. Saltmarsh Snakes are not constrictors and overpower their prey by simply grabbing it in their jaws and quickly swallowing it alive.

In Florida, female Saltmarsh Snakes typically give live birth to 3-9 young between July and October.

Three subspecies of Saltmarsh Snakes are currently recognized in Florida.

Atlantic Saltmarsh Watersnakes have become increasingly rare as waterfront development has destroyed much of their habitat. They are listed as a “Threatened Species” by both the U.S. Fish and Wildlife Service and the Florida Fish and Wildlife Conservation Commission.

Saltmarsh Snakes do not have salt glands to help remove the incidental salt ingested with their food. Therefore, these snakes must obtain freshwater from rain, shifting tides, and potentially body fluids of their prey to help flush out the excess salt.

Saltmarsh Snakes and Southern Watersnakes (Nerodia fasciata) are known to interbreed in areas around the state. However, the resulting hybridization zones are not fully understood and are currently under investigation.

Unfortunately, many watersnakes are killed every year by Florida residents who mistake them for cottonmouths. Although cottonmouths occur throughout Florida, they are not nearly as abundant as the eight species of harmless watersnakes (species in the genus Nerodia) that occur in much the same habitats. If you see a snake in or near the water, most likely it is a harmless watersnake, and it is best for everyone involved to simply leave it alone.