Early palmetto dolls have complex and detailed faces, which could include embroidered eyes, eyebrows, noses, mouths, and even teeth. Most palmetto dolls have embroidered facial features of eyes and a mouth. Later dolls’ features became simple and generic, and include large eyes and a mouth. Other dolls, such as Rag and Skookum dolls, are made with eyes that look to the left or more commonly to the right. It has been written that when a doll looks to the right, it means good health, while those that gaze to the left represent misfortune.

Hairstyles of the Seminole and Miccosukee women have varied throughout the 20th and 21st centuries, and these changes are reflected in the dolls they create. While it makes sense that the hairstyles could be use to date the dolls, it is not a reliable measure, because the doll maker chooses the style she likes for her dolls.  More information:

Early 19th century male (Figure 3) and female (Figure 4) wooden dolls had carved and painted hair. These dolls showcase the bowl cut (male) and the twisted hair bun (female) of the hairstyle used in the early 1900s. Early dolls lacked detail, but later dolls began to have more shape and detail added to their hair. The female doll in Figure 5 exhibits the hair board shape. The wooden male doll in Figure 6 has a carved and painted turban on top of his head. These turbans, which have traditionally been worn by males since the 1800s, were made of woolen cloth. A man would wrap the woolen cloth around his knee to form the turban for his head. It is noted that in different areas turbans were either worn everyday (southernmost Miccosukee camps) and in others only on special occasions. 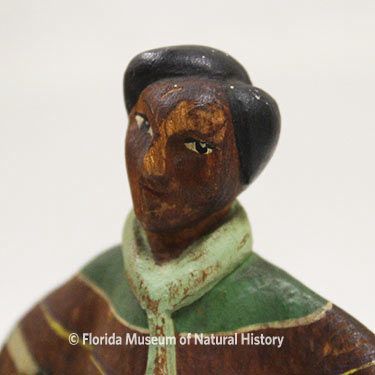 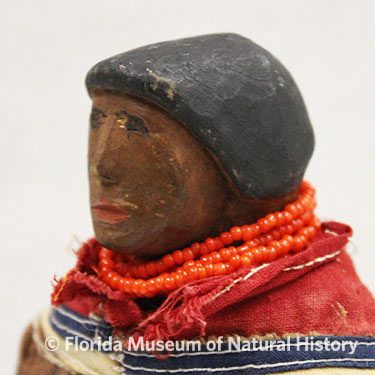 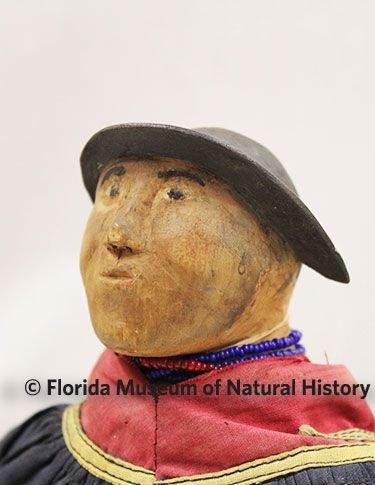 Figure 5: Female doll with hair board. 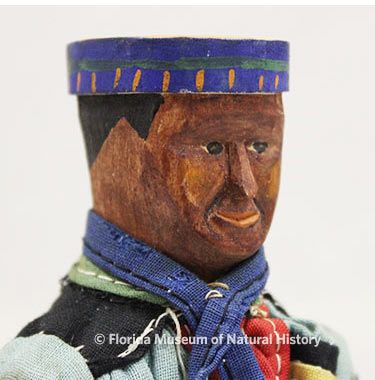 When palmetto dolls began to be produced (1918), their hair was made of black yarn. This yarn rolled hairstyle (Figure 8) was designed to represent women’s hairstyles during the 1920s (Figure 7). Women would push all their hair towards their foreheads then place a small rolled cloth behind their hair, they would then flip their hair back over, and secured the hair with a net or hairpins.  Some women in the late 1920s started to decorate their hairnets with beads, which can be seen in Figure 9. Another variation of the rolled hairstyle for dolls is with cloth (Figure 10). Male dolls have a basic bowl-cut hairstyle when it comes to yarn and cloth as can be seen in Figures 11 and 12. 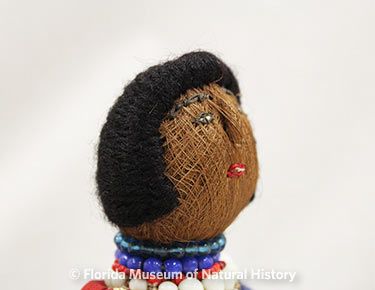 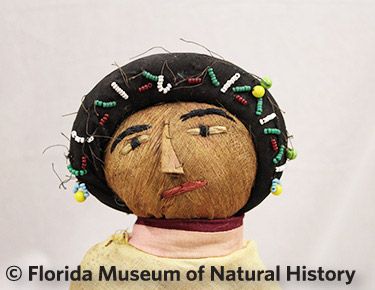 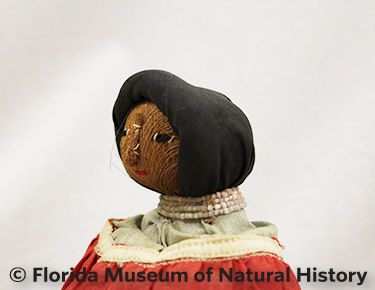 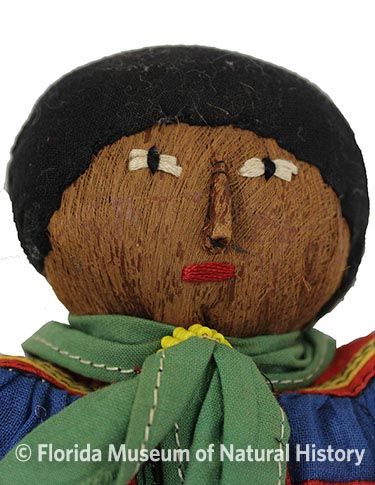 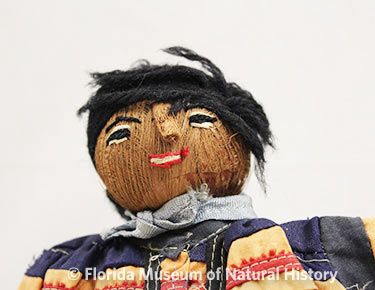 The hair-board hairstyle was introduced to the Seminole and Miccosukee culture around the 1940s (Figure 13), and replaced the rolled cloth style from the 1920s. The difference between the two styles in the dolls is very slight. Instead of a cloth being placed in the hair, a crescent shaped piece of cardboard was positioned onto the head, and the hair was flipped over the cardboard. Figures 14-17 show the hair-board style in dolls and the slight changes that have occurred throughout the years. 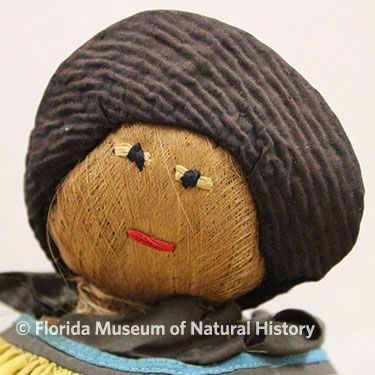 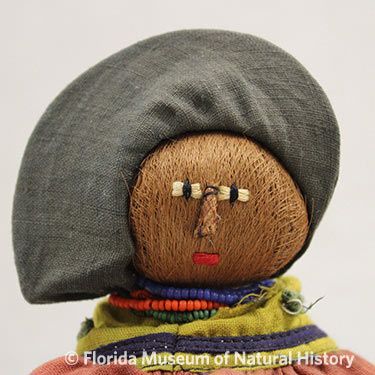 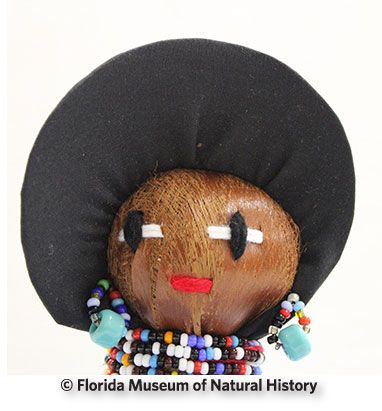 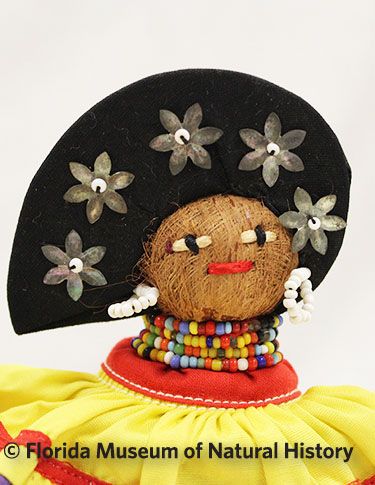 Around the 1940-1950s Seminole dolls were created with braids, pigtails, and ponytails made out of either yarn or nylon (Figures 19 and 20). This was due to the changing hairstyles of the younger Seminole and Miccosukee, who were breaking away from the traditional hairstyles. Male dolls too saw a change during this period; their turbans began to be embellished with silver bands and patchwork (Figures 21 and 22). Doll makers also started using real hair, either horse or human, instead of yarn and cloth.  Figures 23 and 24 exhibit this feature, which is very rare. Use of real hair on dolls most likely started around or after the 1950s. 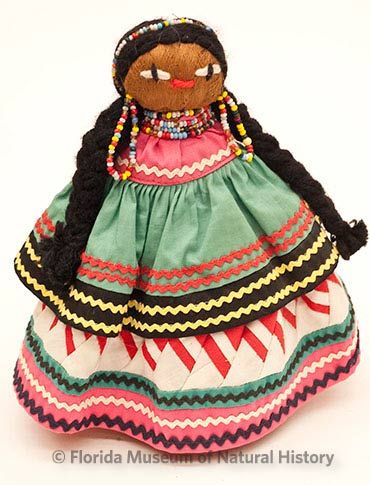 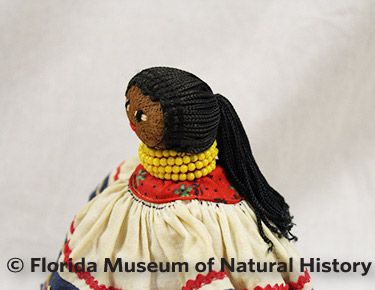 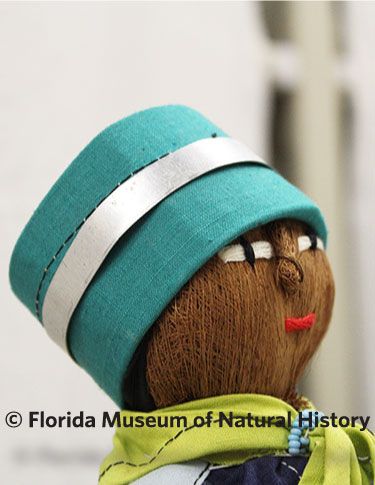 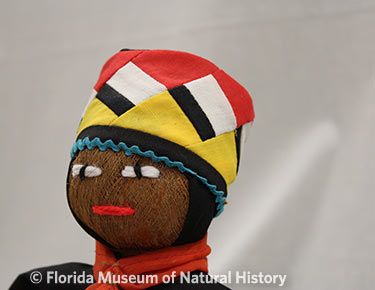 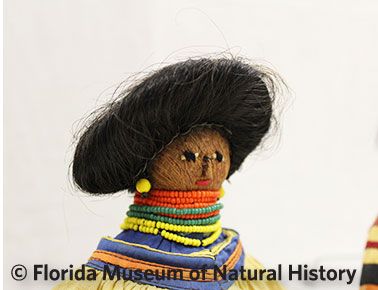 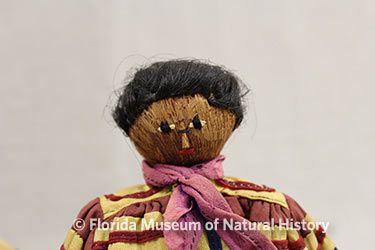 Traditionally, Seminole and Miccosukee women wore jewelry consisting of multiple layers of glass beads around their necks (Figure 25). It is unknown when Seminole and Miccosukee women started to wear such strands of beads around their necks, but prior to European contact, they used natural materials for adornment. Figure 26 shows an example of a doll with multiple layers of beads. Strands of beads were mostly uniform in color before the 1950s, but after that dolls were seen with mixed-color beads (Figure 27).

In the 1930s, dolls began to have earrings. Most of the dolls from this time period have straight drop earrings (Figure 28), a string of beads in a row with a larger bead at the end. Around the 1950s, loop type earrings (Figure 29) were added as another option for the dolls.

Figure 30 shows a doll with metal bangles sewn to her cape. Silverwork is well known to the Seminole and Miccosukee, whose women especially like to adorn themselves with silver bodice pieces or brooches.

Many of the male dolls have “woggles” or “slides,” which fasten the neckerchief to the doll. Seminole and Miccosukee males didn’t customarily wear woggles, but just tied their neckerchief around their necks. Here are three examples from the museum’s collection of dolls having woggles. 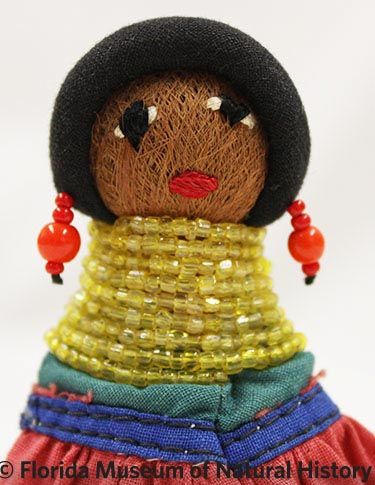 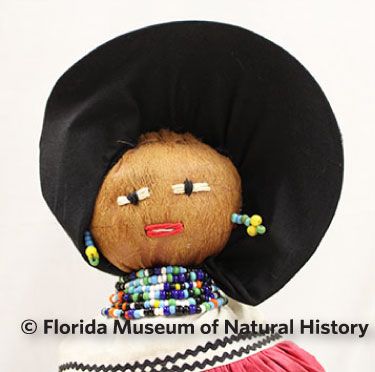 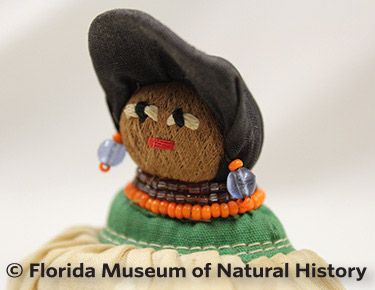 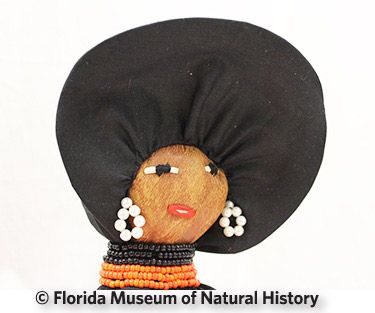 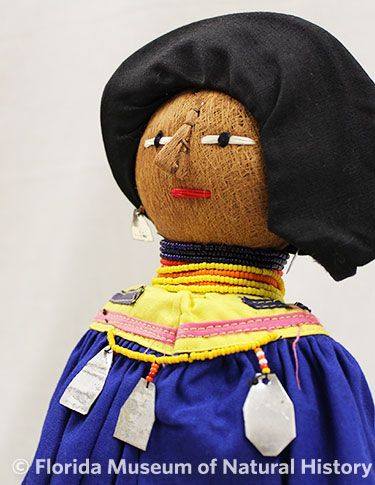 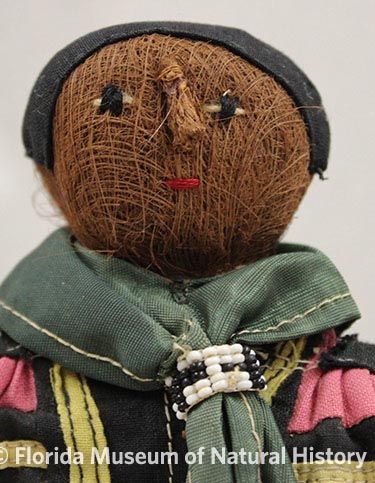 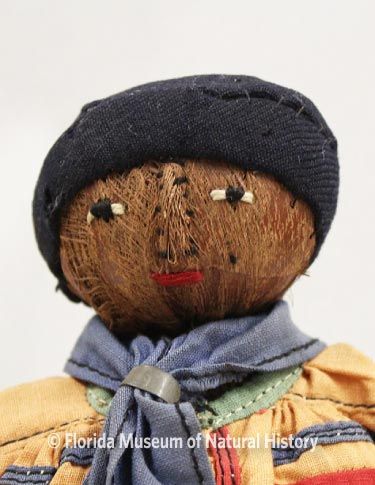 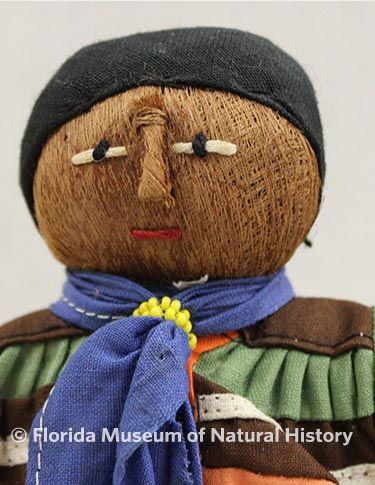