Imagine that Labradors and golden retrievers died out a million years ago, leaving only fossilized skeletons behind. Without the help of DNA, how could we determine that a fossil Labrador, a fossil retriever and a modern Chihuahua all belong to the same species, Canis lupus familiaris? And could we look at the wide variety of dogs today to gain clues about lost diversity in the past?

A new study by Florida Museum of Natural History researcher Natasha Vitek shows how scientists can use animals’ physical features – also known as morphology – to make connections between a modern species and its fossilized relatives, even if they look strikingly different.

“We can’t magically create more fossils,” said Vitek, a doctoral candidate in vertebrate paleontology. “A lot of it is trying to figure out what we can do with what we have at hand to find diversity within a species – diversity we no longer have.”

Scientists often use color, sexual differences, soft tissues, signs of age and DNA to analyze variation within modern species. But these can be missing in fossil specimens.

Vitek relied on a technique known as geometric morphometrics, a way of quantifying an object’s shape, to test whether shape is a reliable way to tease out the subtle relationships between species, subspecies and individuals of the same species that just look different from each other.

She used eastern box turtles, Terrapene carolina – a species that comes in all kinds of shapes, sizes and colors – to make links between the rich variation in modern specimens and their fossil relatives from as far back as the Pleistocene, from about 2.6 million to about 11,700 years ago. 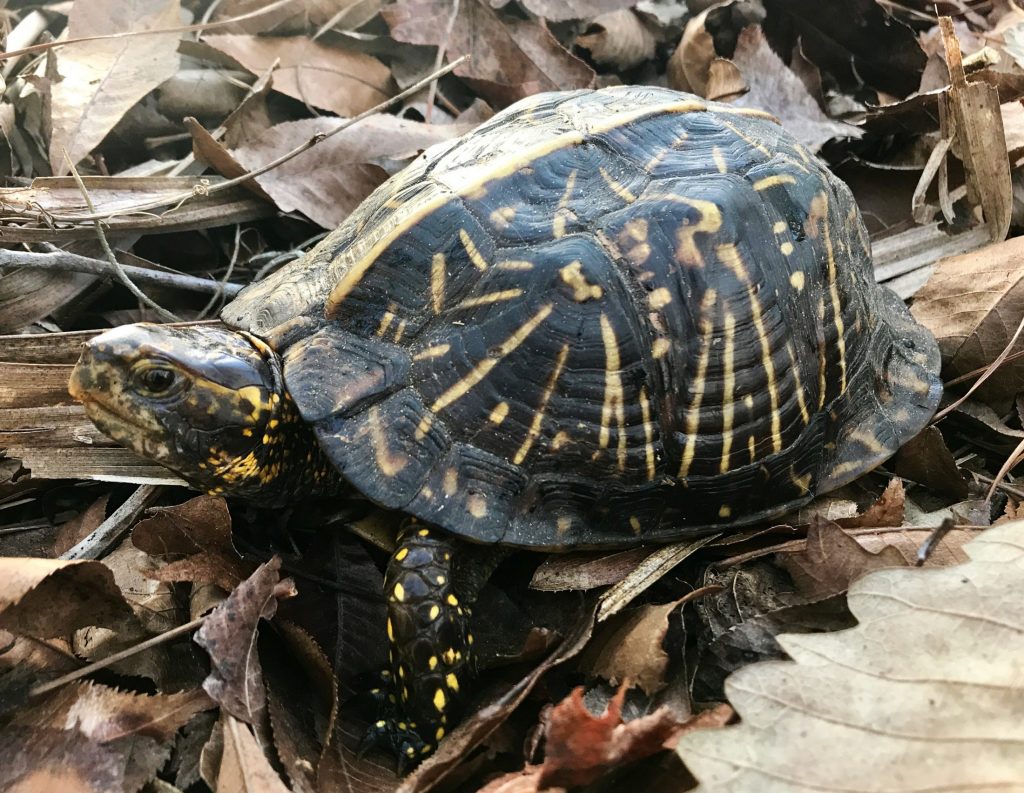 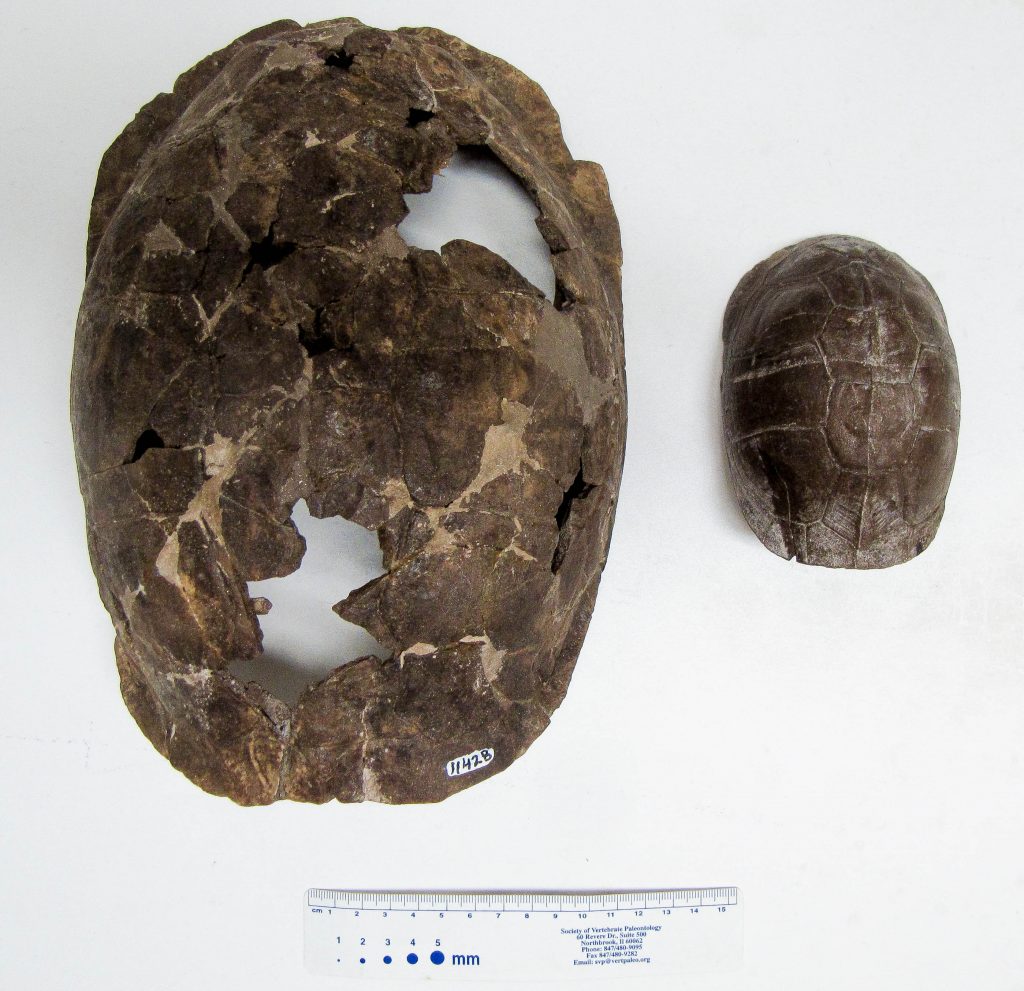 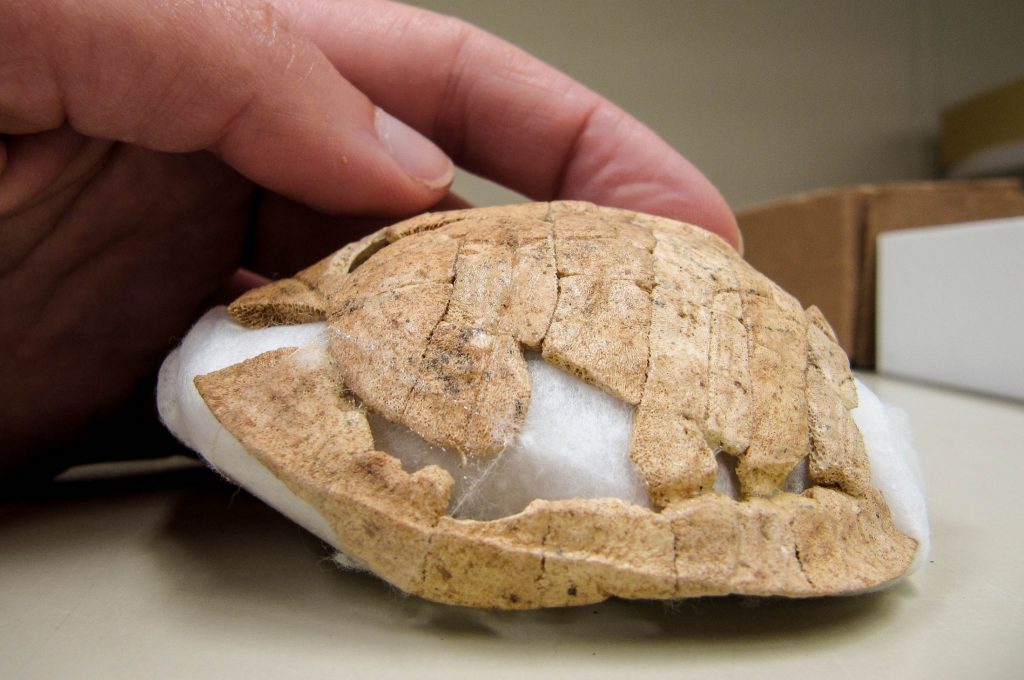 Vitek found that juvenile turtles could be reliably distinguished form adults by the presence of gaps between the bones of the shell. 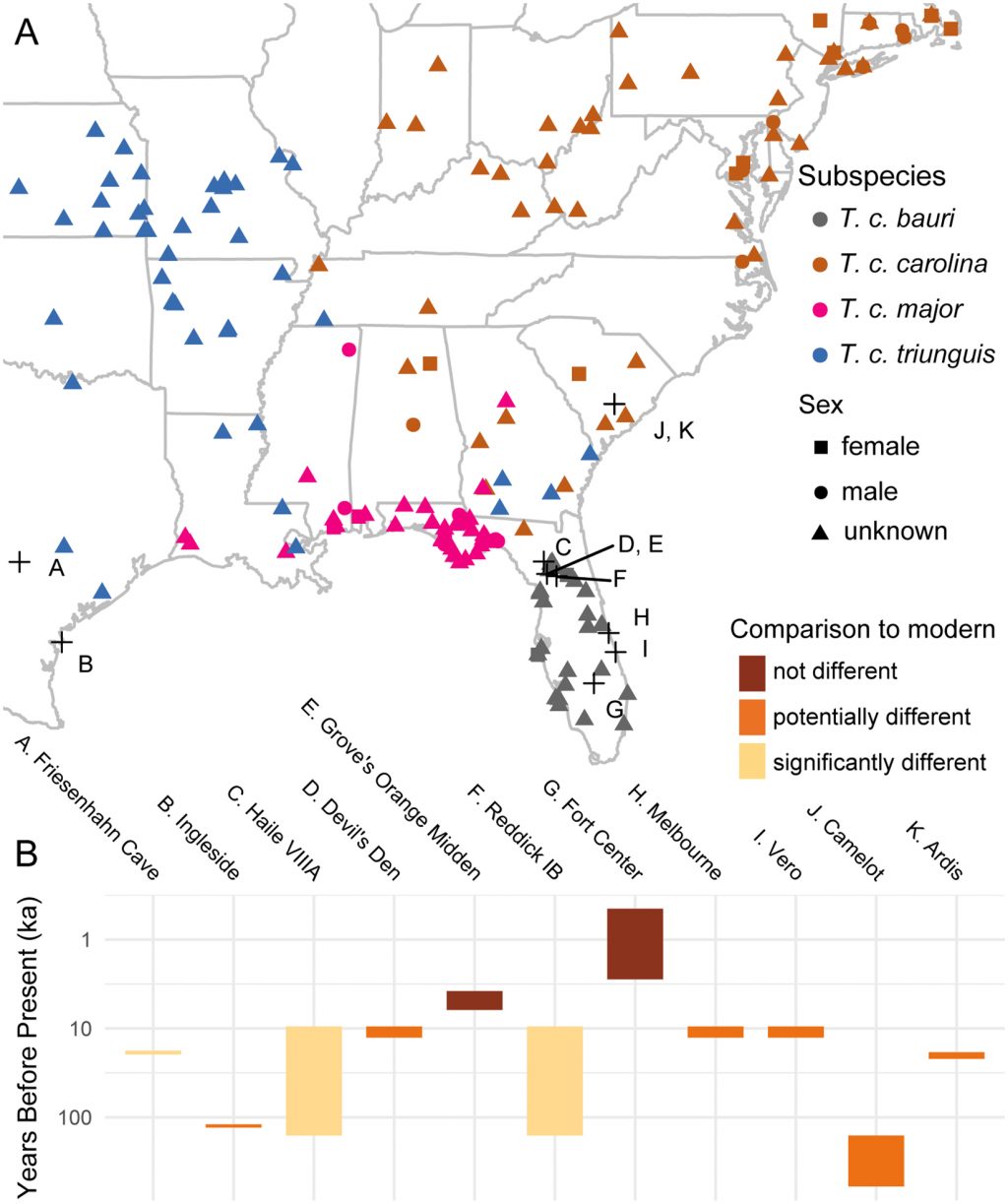 Vitek’s results showed that fossils from two Florida sites had essentially modern shell shapes while fossils from older sites in Florida, South Carolina and Texas differed from their modern relatives.

Modern eastern box turtles display a dizzying amount of variation. A box turtle in Oklahoma can be straw-colored while the same species in Florida is dark with yellow sunburst patterns. Adult box turtles also come in a wide array of sizes with no direct link between size and age. A small turtle in one location could be the same age as or older than a large turtle of the same species in another location, even within a short distance.

Similar levels of variation also crop up in fossil eastern box turtles. How different must two turtles be to indicate that they belong to different species or subspecies?

To make sure she was “comparing apples to apples,” Vitek only analyzed the shape of eastern box turtle shells, which preserve well and are common in the fossil record.

In doing so, she was wading into a debate about eastern box turtle variation that has lasted more than 80 years, with some scientists suggesting that fossil and modern box turtles are all the same species, while others – pointing to a distinction in size or shape – hypothesizing that some fossils represented a separate, extinct species. Some researchers have also argued that certain subtle differences between fossils are evidence of various subspecies.

Vitek, who began the study as a master’s student at the University of Texas at Austin, compared 435 shells of modern eastern box turtles and 57 shells of fossil specimens, analyzing changes in location, shape, size and sex.

“It’s almost ‘more money, more problems,’” Vitek said. “You’d think that with so many fossils, it would be great, but it just means that you can’t hide from all the natural complexity.” 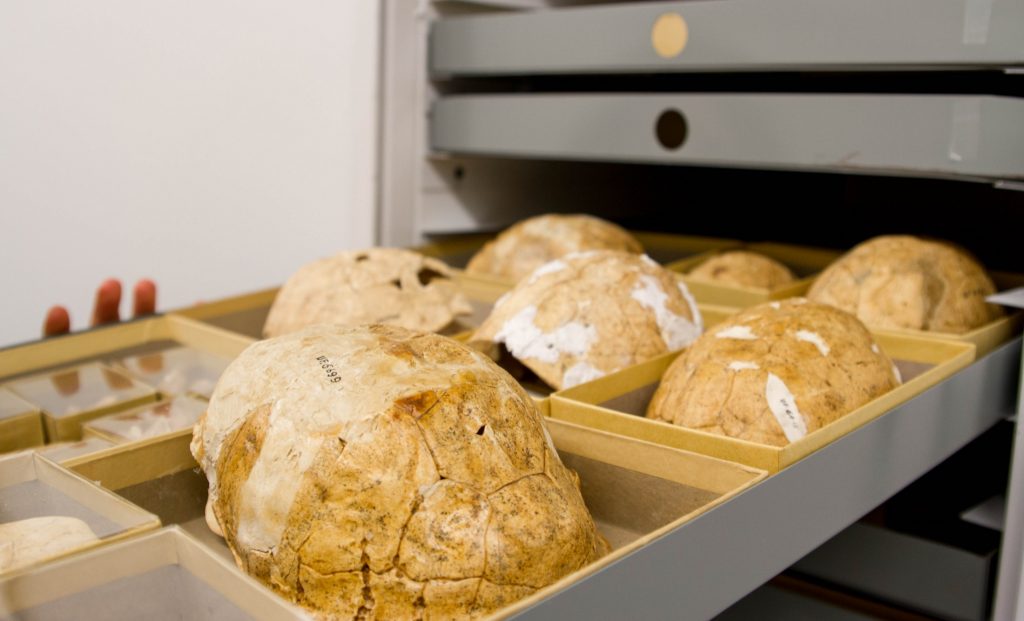 Eastern box turtles are well represented in the fossil record, but this drawer contains a rarity — many complete shells from the same site. 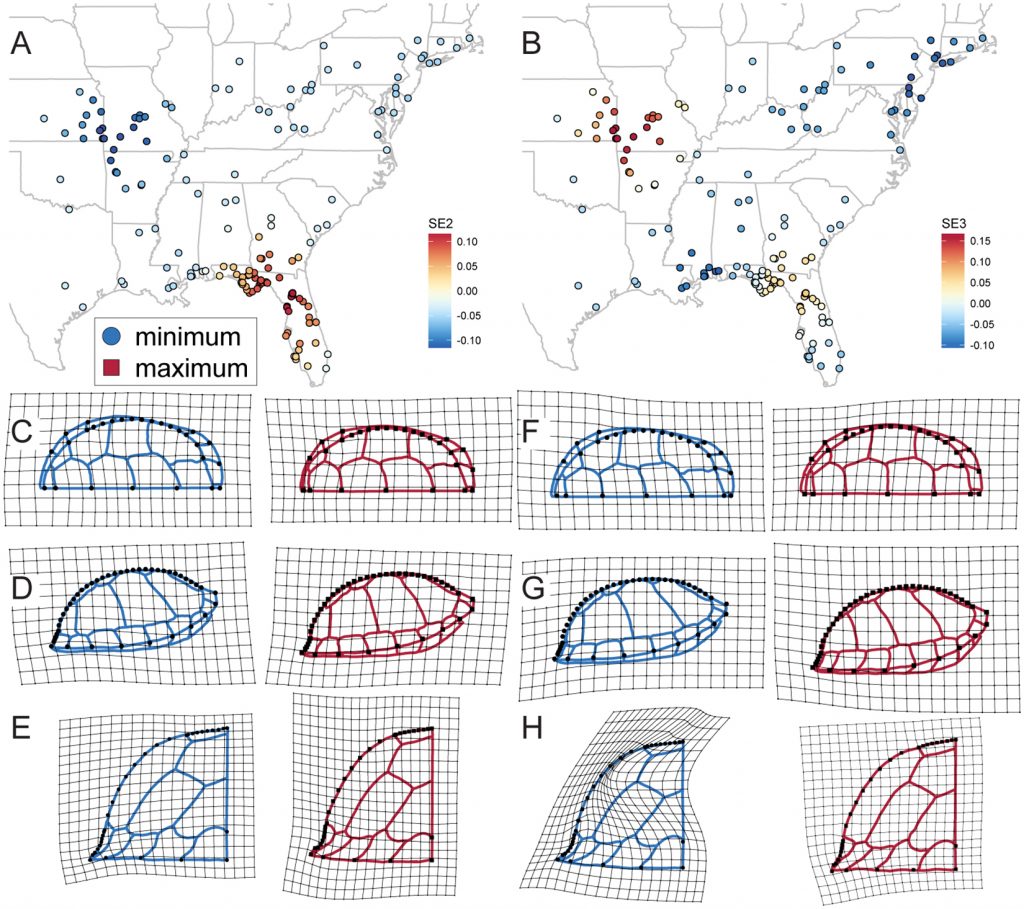 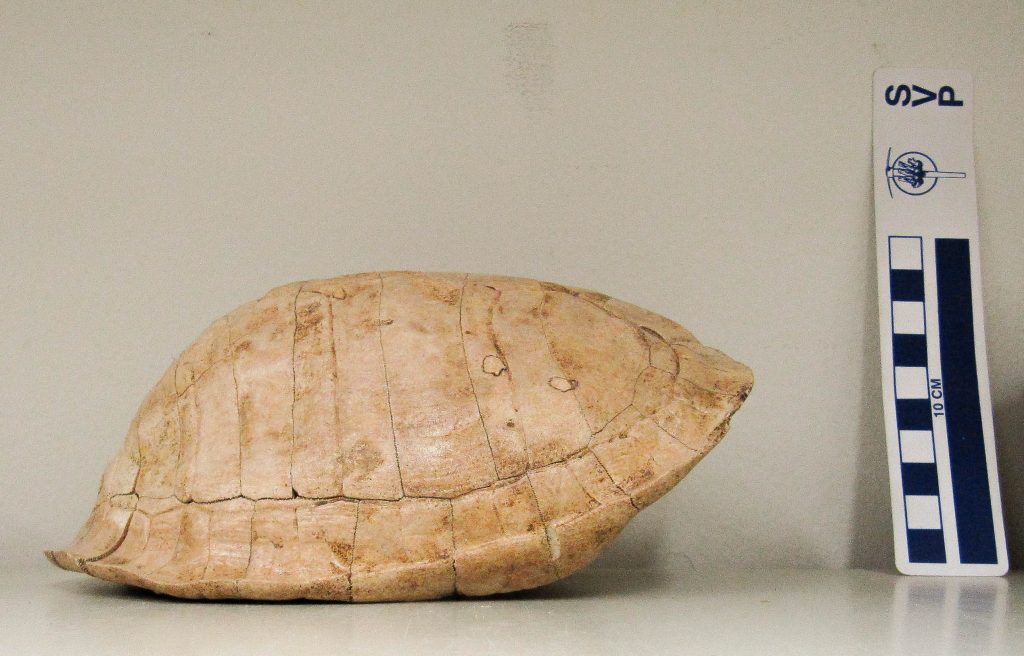 Geometric morphometrics can capture shell curvature and the flare of its edges, measurements important for analyzing variation. 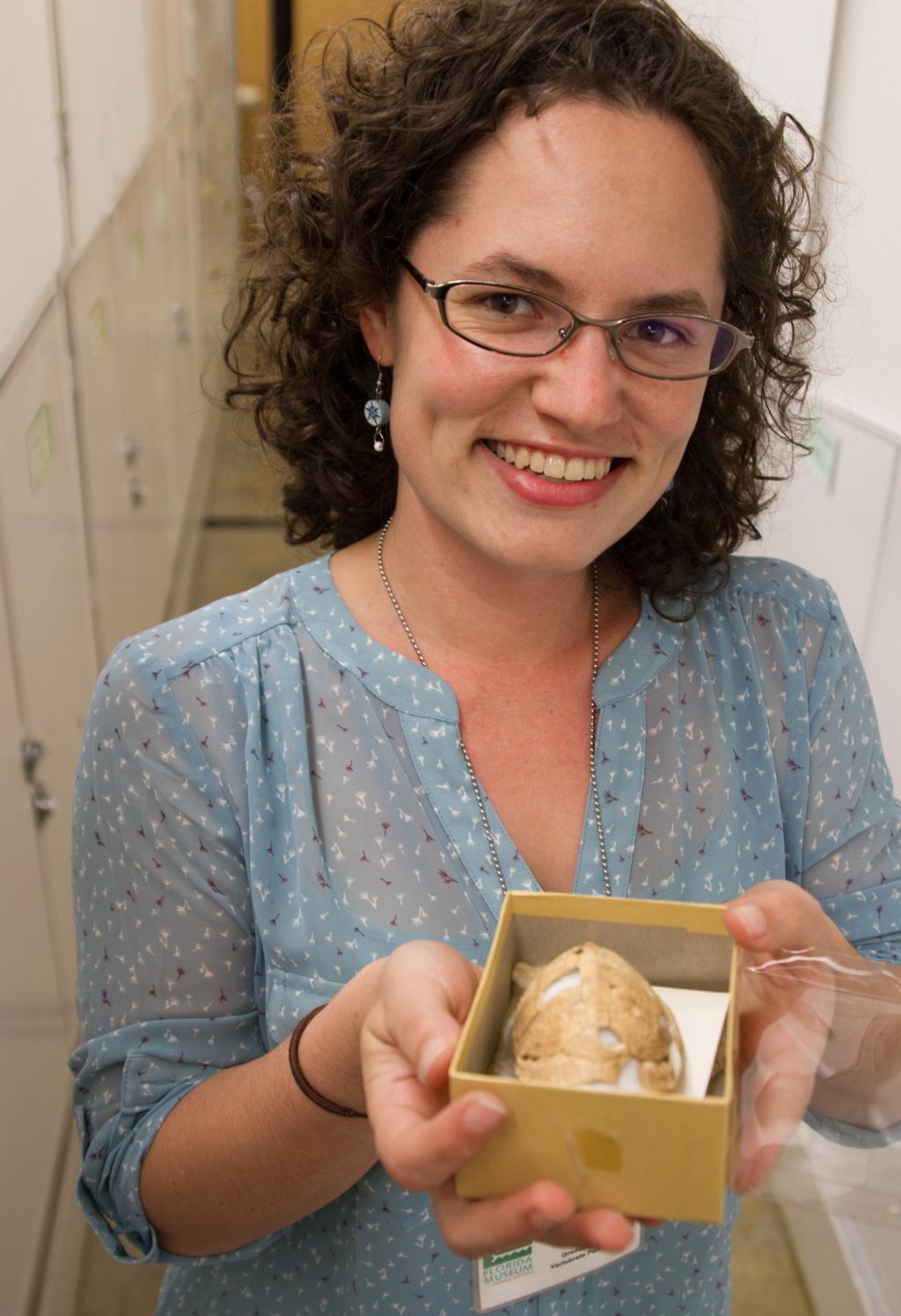 To make sure she was “comparing apples to apples,” Vitek excluded juveniles, like this one, from her analysis. 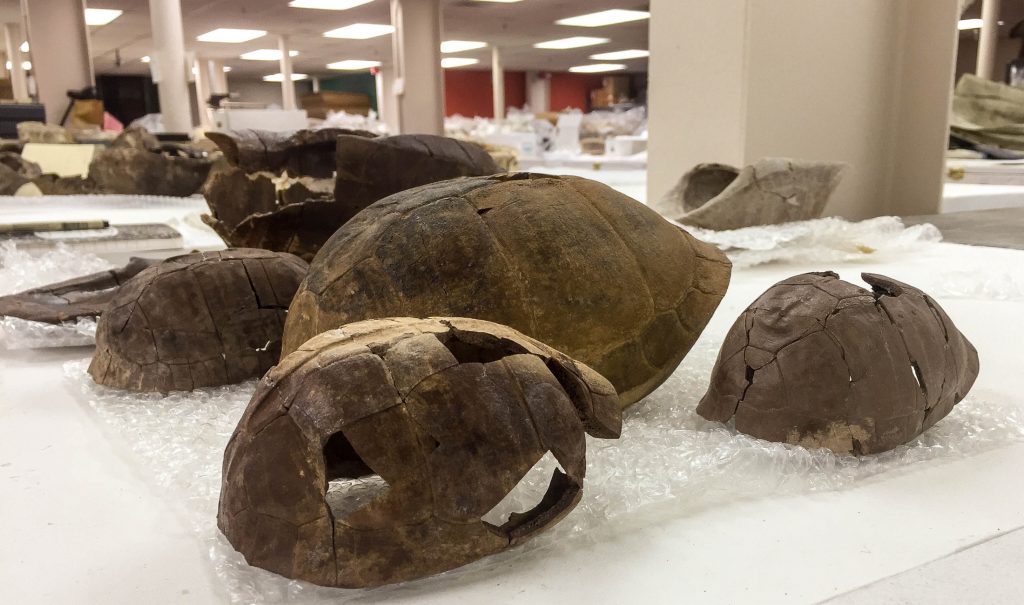 These fossils came from the same site in South Carolina, showing the variation in size of adult eastern box turtles. 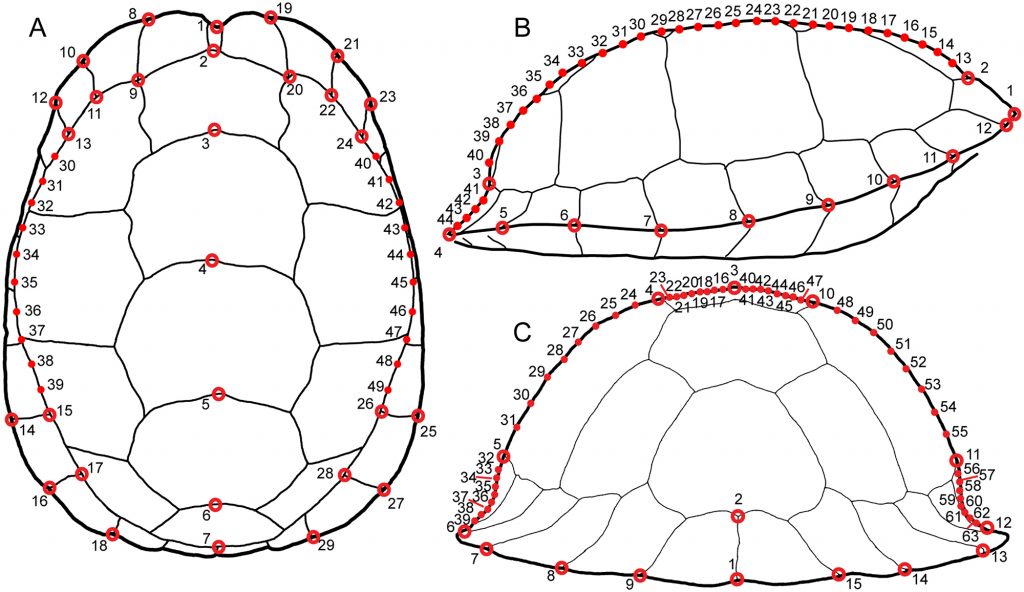 The open circles represent points that were common to all specimens in Vitek’s study.

To find a signal in the noise, she used geometric morphometrics to plot shell shape into a series of coordinates, “like a connect-the-dots puzzle,” she said, which created a more complete model of a shape in space.

“This allows you to see how that overall constellation of points is changing from shape to shape,” Vitek said. “You might see whole new patterns you would never have thought to measure before and capture things like curvature – things that are really hard to measure in just a single linear feature.”

Her results showed that scientists on both sides of the debate are partially right.

The argument that modern variation in eastern box turtles mirrors variation in fossil specimens of the same species does have some merit.

“It’s not like we hit the fossil record and there’s a hard boundary between what’s extinct and what still exists today,” she said. “Just like we’d expect from evolution, there is a gradient of variation that carries through to modern box turtles. Having some shells that aren’t that different is reassuring in the sense that, yes, some species do go back in time.”

But, she added, some shells likely do belong to lost subspecies, existing subspecies or closely related extinct species.

“Some sites have shells that are not only bigger than modern eastern box turtles but also very different,” she said. “There is lost variation in the eastern box turtle record. It turns out that if you go back to fossils, there is even more diversity than you would be able to pick up just by studying today’s box turtles.”

Vitek said she is hopeful her study will spur more researchers to look deeper at bony structures within species as a means of detecting variation in fossils.