by Halle Marchese • December 21, 2020
This painted bunting was taken to a rehabilitation clinic after colliding with a window, but died from its injuries. Researchers analyzed more than 1,900 such cases, offering a comprehensive look at what's killing Florida's birds. Florida Museum photo by Kristen Grace

An analysis of birds that died at Florida wildlife rehabilitation clinics found songbirds and other land-dwelling species were most often killed by traumatic injuries, commonly caused by cats or collisions with buildings, windows or vehicles. For seabirds, malnourishment was a leading cause of death, possibly due to fluctuations in fish numbers as water temperature warms.

Florida Museum of Natural History ornithologists examined 1,928 birds, representing 285 species, that succumbed to injuries or illness at rehabilitation clinics from 2015-2019. Trauma was responsible for killing 93% of terrestrial birds in the sample and 78% of near-shore waterbirds, such as ducks. Malnourishment killed 77% of the sample’s offshore birds, such as petrels and shearwaters, which were often found beached and too weak to fly. 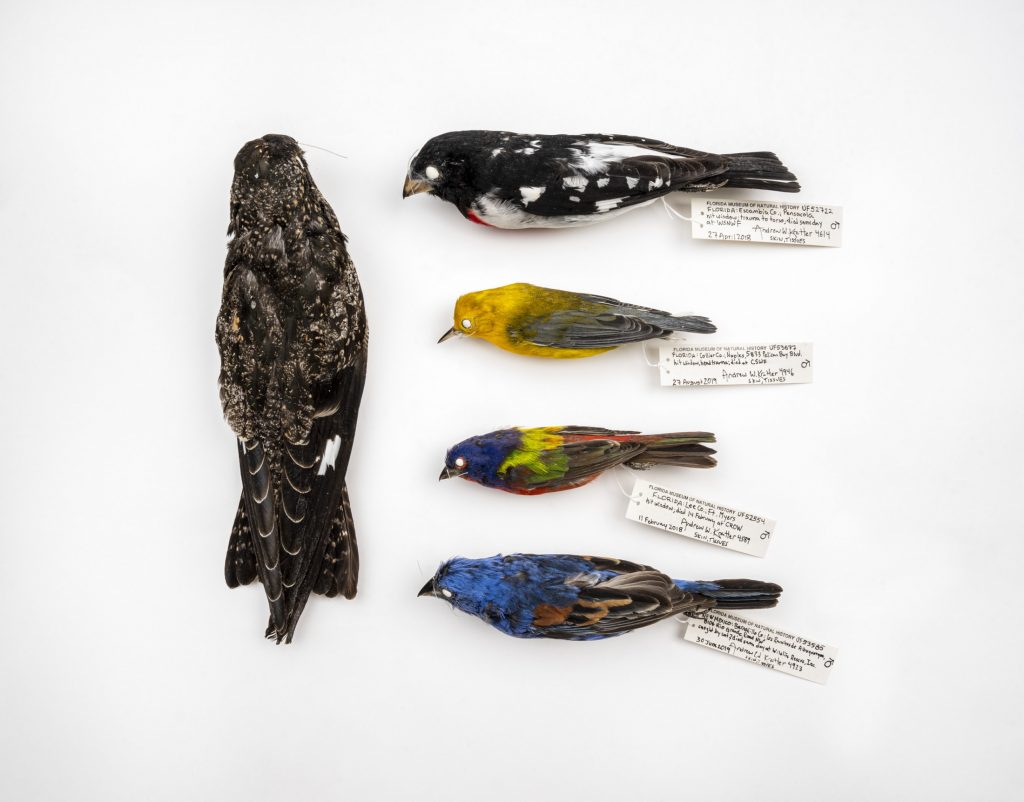 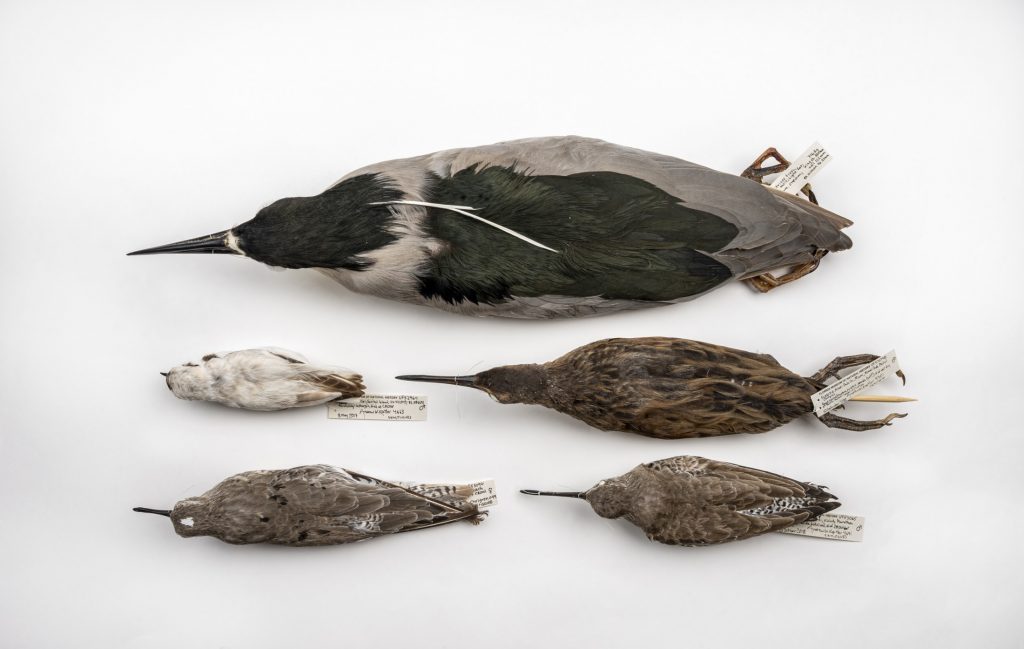 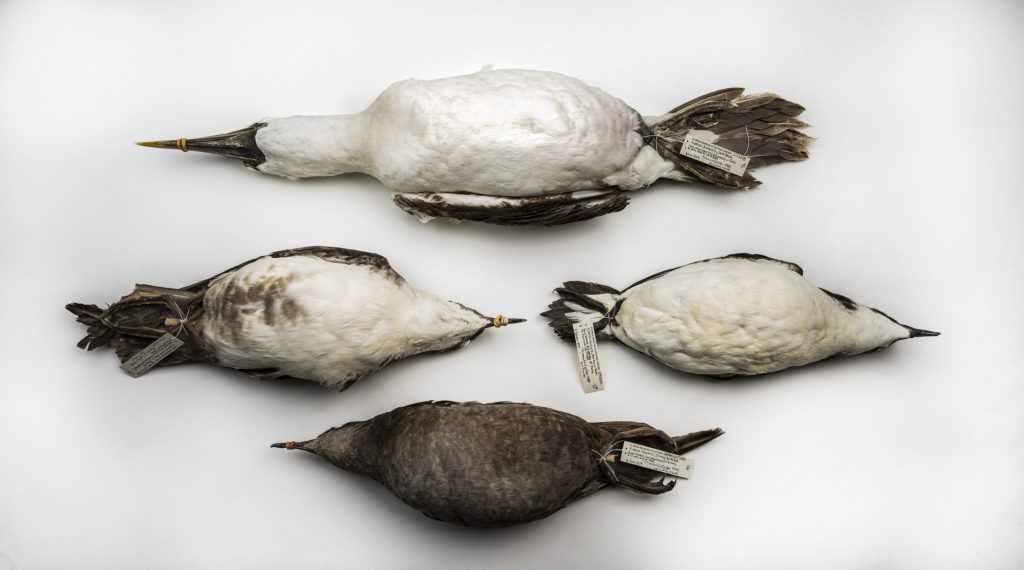 Malnourishment was a leading cause of death for seabirds, accounting for 77% deaths in the group. Victims included, clockwise from top, this masked booby, razorbill, sooty shearwater and great shearwater.

The researchers combined information from those who delivered sick or hurt birds to clinics, clinic veterinarians and internal examinations at the Florida Museum in the most comprehensive study of mortality in the state’s birds to date.

Specific causes of trauma were recorded for 418 of the birds. Nearly 30% were the result of collisions with buildings or windows. About 26% were caused by moving vehicles, and about 25% were from cat attacks.

“Most of the trauma is a byproduct of our civilized world,” said David Steadman, Florida Museum curator of ornithology and study co-author. “From an evolutionary standpoint, these are novel sources of mortality that the birds aren’t adapted to.”

Nearshore birds were more susceptible to illness than offshore and terrestrial species, with sickness accounting for 21% of deaths in the group. Kratter said illness might be more prevalent in populations of nearshore birds heavily affected by toxic algal blooms.

The study also uncovered a few outliers, including two birds whose unfortunate deaths were caused by bubblegum and a golf ball.

The findings point to a need for conservation strategies targeted to address the different threats that bird species face based on habitat, Kratter said. Organizations such as the American Bird Conservancy advocate for using bird-safe glass in construction, limiting the use of toxic chemicals and keeping cats indoors as key steps for conserving bird populations, especially during migratory peaks in fall and spring.

Previous research estimates that 40-70% of birds brought to rehabilitation clinics eventually die from their injuries or illness and are typically incinerated per state regulations. But thanks to a longstanding partnership between the Florida Museum’s ornithology division and clinics across the state, nearly 10,000 of these birds have joined the museum’s collection of more than 53,000 bird skeletons and skins, where they make lasting scientific contributions.

Salvaged birds enable the researchers to train students in specimen preparation and also provide data and tissue samples that can be studied for generations.

“Saving the birds for posterity and learning from them means the birds didn’t die in vain,” Steadman said. “That softens the blow.” 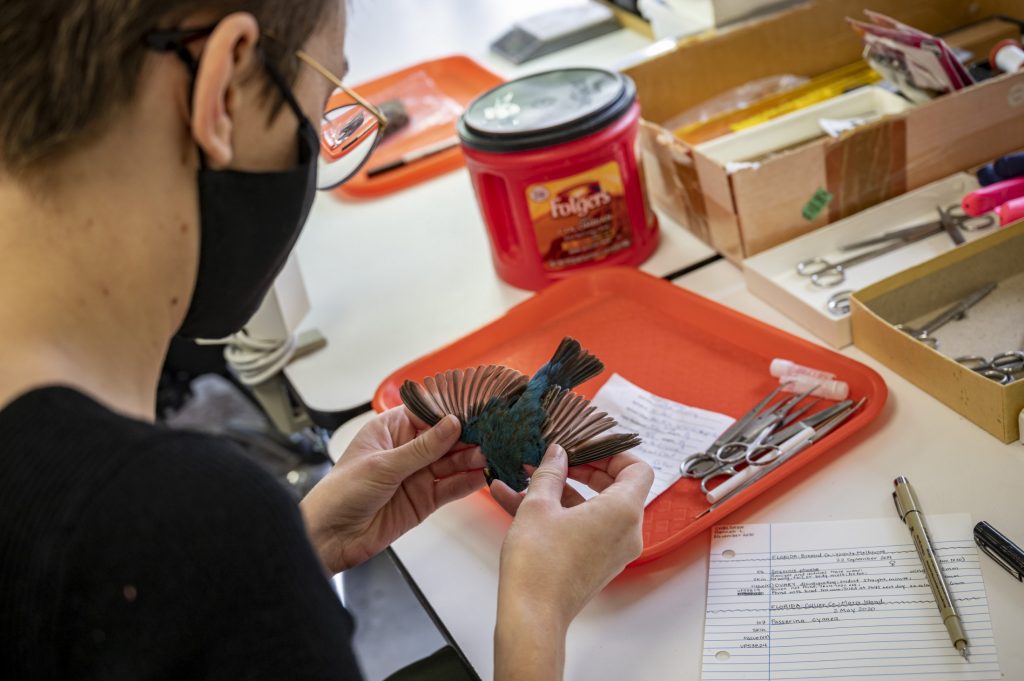 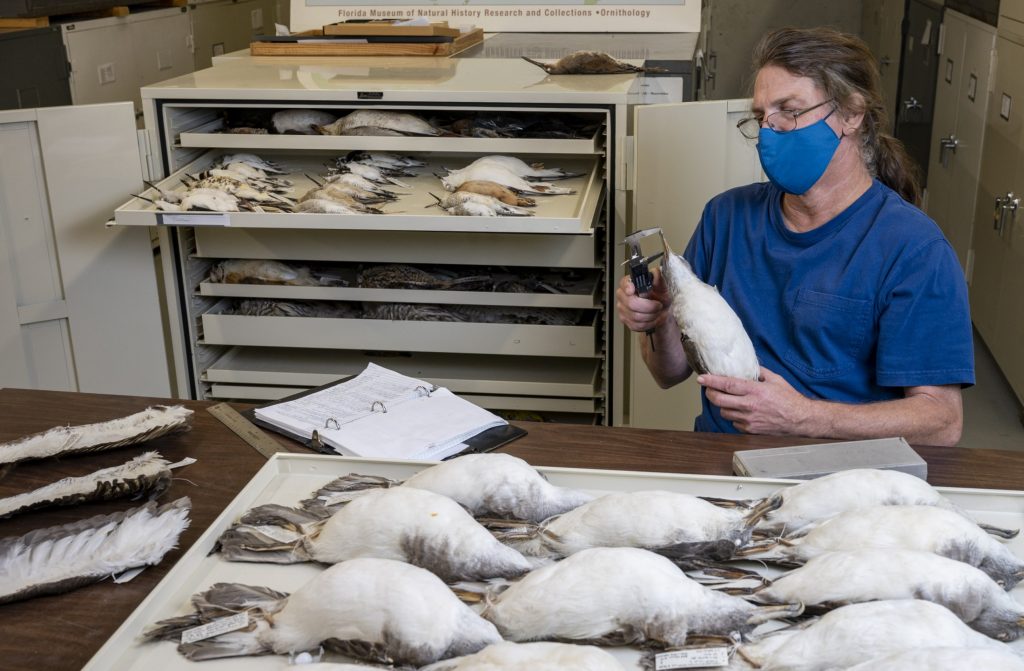 Kratter measures a Cory’s shearwater, a seabird that breeds on rocky islands in the Atlantic Basin.

The researchers are selective about which birds they salvage, often opting for unusual species or those sparsely represented in the collection.

Tracking birds taken in by clinics has also helped paint a real-time portrait of which species have rebounded from endangerment and how population trends are changing. For instance, Steadman said, the merlin, a type of falcon previously rare in Florida, is now a common sight in rehabilitation clinics.

“That’s actually a good feeling, even though we don’t get a kick out of seeing a dead merlin,” he said. “There are enough of them around that the rehab clinics are picking them up at a fairly routine level.”

Steadman added that the clinics are an “unbelievable source of information on birds that tend to slip through Florida without many observations.” Over time, he and Kratter have recorded the Atlantic Ocean’s first short-tailed shearwater, a species native to the Pacific Ocean, as well as two Florida firsts: the northern fulmar, native to the shores of the Arctic Ocean, and the ancient murrelet, rarely recorded outside the North Pacific Basin.’

The researchers said collaborating with staff at the wildlife rehabilitation clinics was a highlight of the project.

“It’s just such an important part of what we’ve done with them,” Kratter said. “They’re our pals and our colleagues in all of this, and what they do is difficult.”

They published their study in the Florida Field Naturalist.

The work was funded by the Batchelor Foundation and the Florida Fish and Wildlife Conservation Commission.

Editor’s note: Copies of the study are available upon request.