A large fruit-eating bird from Tonga joins the dodo in the lineup of giant island pigeons hunted to extinction.

Fossils show that Tongoenas burleyi, a newly described genus and species, inhabited the Pacific islands for at least 60,000 years, but vanished within a century or two of human arrival around 2,850 years ago.

Unlike the dodo and the extinct Viti Levu giant pigeon of Fiji, however, T. burleyi could fly. This canopy-dwelling species co-evolved with fruit-bearing trees in the mango, guava and chinaberry families, acting as an essential forest cultivator by spreading seeds to new locations. The size of a large duck, T. burleyi was likely capable of swallowing fruit as big as a tennis ball, said study lead author David Steadman, curator of ornithology at the Florida Museum of Natural History.

“Some of these trees have big, fleshy fruit, clearly adapted for a big pigeon to gulp whole and pass the seeds,” Steadman said. “Of the fruit-eating pigeons, this bird is the largest and could have gulped bigger canopy fruit than any others. It takes co-evolution to the extreme.”

The absence of T. burleyi from the Tongan islands could threaten the long-term survival of local trees that depended on the pigeon as a seed transporter, said study co-author Oona Takano, a doctoral student at the University of New Mexico.

“T. burleyi provided an important service by moving seeds to other islands,” said Takano, who was previously a research assistant at the Florida Museum. “The pigeon species on Tonga today are too small to eat large fruits, which imperils certain fruit trees.”

When Steadman first found T. burleyi fossils in a cave on the Tongan island of ‘Eua, he was immediately impressed by their size: The bird was about 20 inches long, not including the tail, and weighed at least five times as much as the average city pigeon.

“I said, ‘Oh my God, I’ve never seen a pigeon that big,’” Steadman said. “It was clearly something different.”

Once he and archaeologist David Burley of Simon Fraser University – who is also the species’s namesake – began excavating charred and broken remains of T. burleyi at archaeological sites, “we knew it was another human-caused extinction,” Steadman said. “Pigeons and doves just plain taste good.” 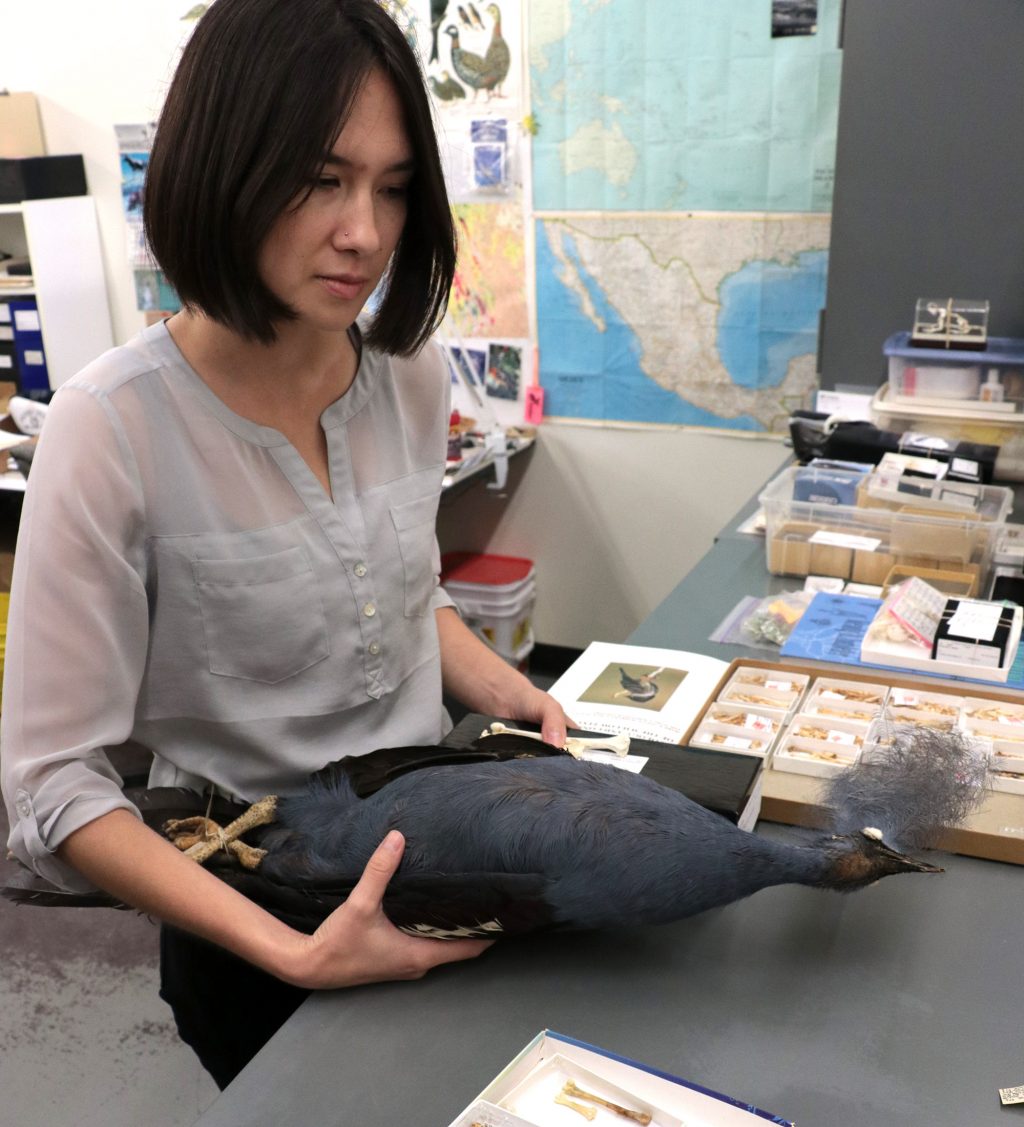 Oona Takano holds a western crowned pigeon, Goura cristata, from the Florida Museum ornithology collection. G. cristata is one of the largest living pigeon species and is native to New Guinea. Unlike Tongoenas burleyi, it lives on the ground. 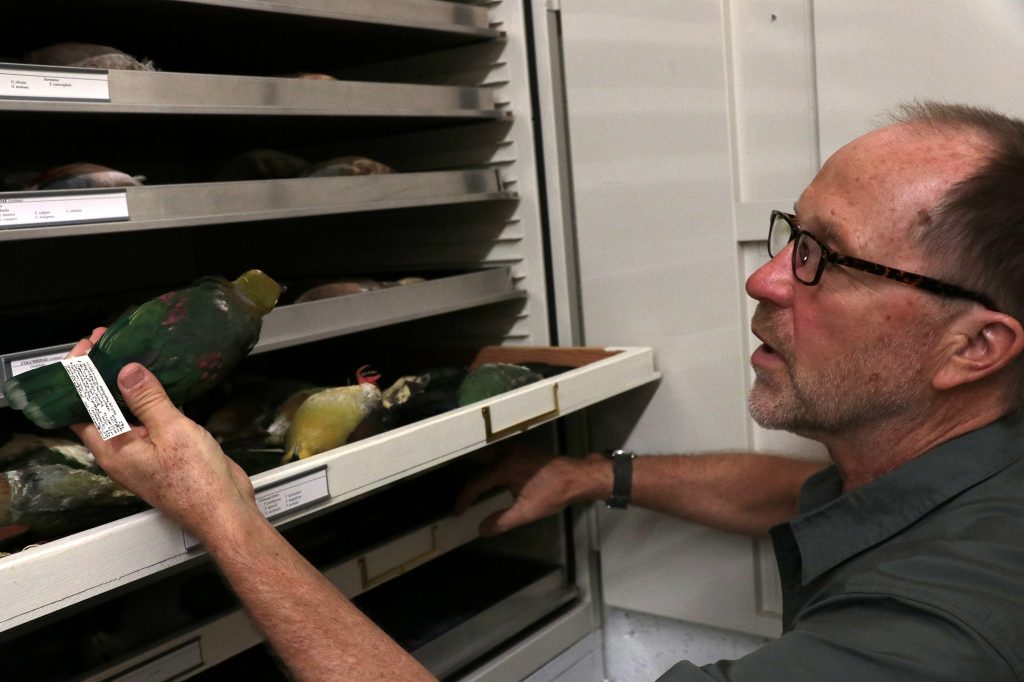 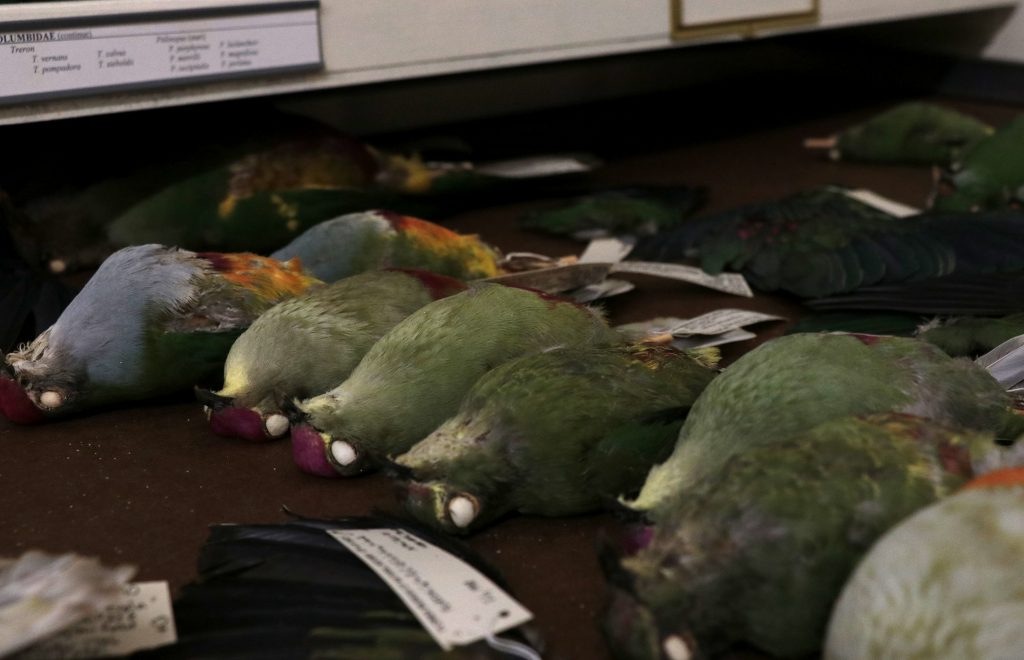 The Florida Museum’s ornithology collection contains many specimens from the Pacific islands, including this drawer of fruit doves, members of the genus Ptilinopus.

Columbids, the family that includes pigeons and doves, had few predators or competitors before people reached the Pacific islands, he said. The region was devoid of primates and carnivores such as cats, dogs and weasels, and hawks and owls were absent from many islands. The birds flourished in this nurturing environment, diversifying over the past 30-40 million years.

Today, the Pacific islands are the global epicenter of pigeon and dove diversity, with more than 90 species, ranging from fruit doves as light as a handful of raisins to the turkey-sized, ground-dwelling crowned pigeon of New Guinea. But the number and distribution of birds in the region is a shadow of what it once was, Steadman said. Tonga’s four remaining species of pigeons and doves represent less than half of the islands’ historic diversity.

“This is another example of how looking at the modern fauna doesn’t yield a complete picture of a region’s diversity,” he said.

Steadman and Takano analyzed the features of columbid hindlimbs, dividing them into three groups: tree-dwelling species, ground-dwellers and those that live both on the ground and in trees. Pigeons and doves that spend most of their time in the canopy tend to have shorter legs, more suitable for perching and gripping in high winds. Those that forage for seeds on the ground have longer legs adapted for walking and running. Birds that flit between the understory and the forest floor have legs that are a blend of the characteristics of the other two groups.

The researchers found surprising agreement between the groupings based on leg characteristics and molecular data: In other words, canopy-dwelling pigeons tend to be more closely related to one another than to birds in the other two groups.

“Given that there are 350 species of pigeons and doves, people might suspect these big changes in lifestyle evolved independently many times,” Steadman said. “But right now, we don’t have evidence that it happened more than once – at least in the tropical Pacific.”

The relatively short hindlimbs of T. burleyi mark it as a canopy-dwelling species. Steadman hypothesized the species featured the bright, even gaudy, plumage of other pigeons that live in treetops, where intense colors provide better camouflage than the muted browns and grays of pigeons that live on the ground.

The researchers dedicated the study to the memory of W. Arthur “Art” Whistler, whose expertise in West Polynesian botany was unsurpassed, Steadman said. Whistler died from COVID-19 in April.

“There wasn’t a plant on Fiji or Tonga that Art didn’t know, including all of the pigeon-dispersed fruits,” Steadman said. “He was a true plant nerd and complete salt of the earth. He always made time for people.”

The research was published in Zootaxa.

The National Science Foundation, the National Geographic Society and the University of Florida Division of Sponsored Research funded the research.

Mollusk graveyards are time machines to oceans’ pristine past