by Halle Marchese • January 8, 2020
Experts have mistaken the chanchita, Cichlasoma dimerus, for a look-alike invasive species, the black acara, in Florida for at least 20 years. Both species belong to the cichlid family, in which species can often be difficult to distinguish from one another. Photo courtesy of Ryan Crutchfield

Sometimes scientists make mistakes. Case in point is the chanchita, a South American freshwater fish that has been swimming in Florida’s waters for at least two decades, all the while identified by experts as another invader, the black acara.

Although the two species look strikingly similar, the black acara is tropical, a native of equatorial South America, while the subtropical chanchita isn’t typically found north of Southern Brazil. Because the chanchita is more cold-tolerant, researchers say it could have a more widespread impact in Florida than the black acara and could threaten native species in North Central Florida ecosystems.

“Even the professionals get it wrong,” said Robert Robins, Florida Museum of Natural History ichthyology collection manager. “The chanchita has been right here, right under our noses. It’s spread into seven different counties and five different river drainages in Florida, well beyond the Tampa Bay drainage where it appears to have been first introduced.”

Introduced by the pet trade, the black acara has been a well-known invader in the Miami area since the 1950s and is now common in South Florida. When a similar cichlid appeared in the waters draining into North Tampa Bay around 2000, scientists assumed the black acara was simply expanding its range or had been introduced a second time. 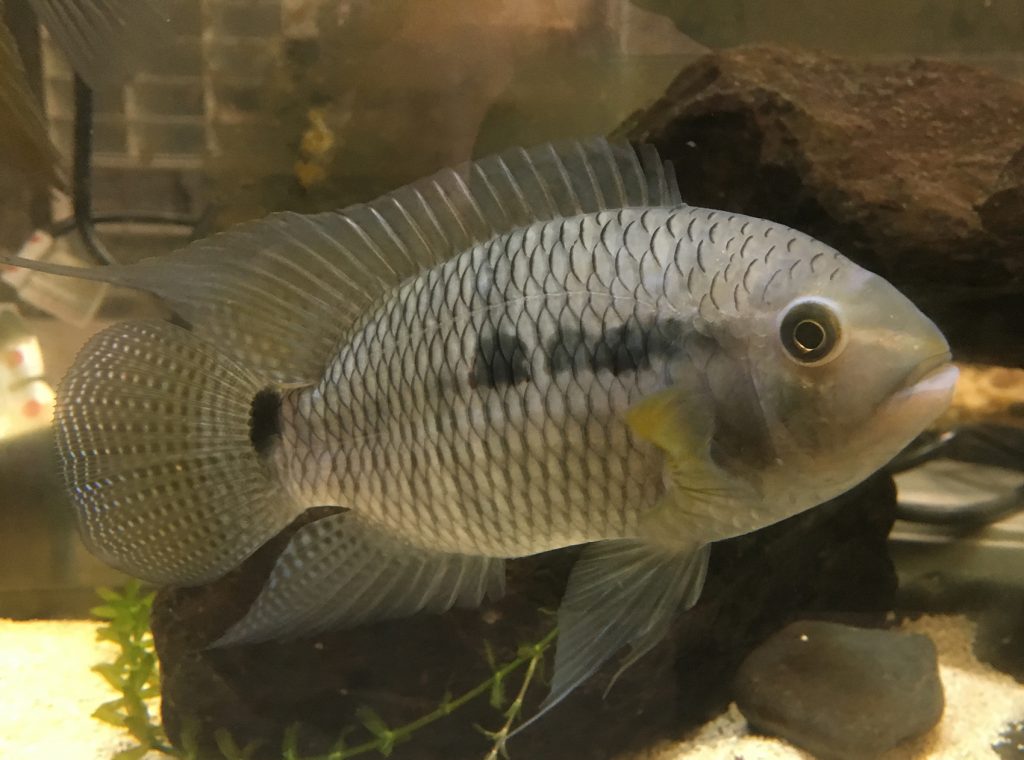 This black acara, Cichlasoma bimaculatum, a species native to equatorial South America, was collected from a ditch in Broward County. Black acaras are often beige with clear to light gray fins. 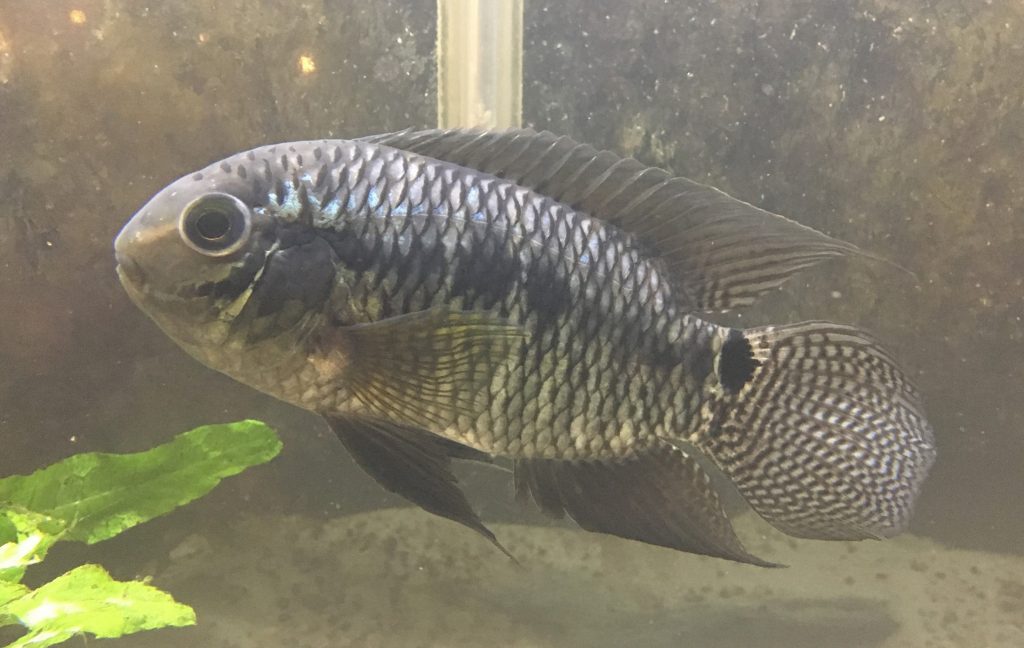 While the chanchita closely resembles the black acara and belongs to the same genus, the two species would not normally meet: The chanchita is native to southern South America. This specimen was found in Hillsborough County.

The misidentification was finally spotted by sharp-eyed amateur fish collectors as well as Mary Brown, a biologist who studies non-native fishes. Brown questioned Robins’ assertion that a specimen he brought home from holiday collecting near Tampa in 2017 was a black acara, Cichlasoma bimaculatum. Although the fish had the same general appearance, something wasn’t adding up.

“The body color and the pattern on the scales on its head just looked a little different,” said Brown, a scientist at the U.S. Geological Survey Wetland and Aquatic Research Center. “It wasn’t the same as the black acara I’ve come across while conducting non-native fish surveys in South Florida.”

Meanwhile Ryan Crutchfield, founder of the fish identification database FishMap.org, was getting feedback from amateur collectors that he’d misidentified a fish as a black acara for an article on the history of the species in Florida. Crutchfield, Robins and Brown took a closer look at the specimens in question, eventually identifying them as the chanchita, Cichlasoma dimerus.

“I don’t think anyone except for the amateurs who have an interest in fishes of Florida thought twice about whether or not these fish were black acara,” Robins said. “They’re out there collecting stuff while quite honestly a lot of us are stuck behind our computers typing emails.”

Because of their hardiness and bright colors, cichlids are often coveted by aquarists. But with about 1,900 species – 20 of which are invasive in Florida – and constant revision to the family’s classification, cichlid identification becomes tricky, Robins said. 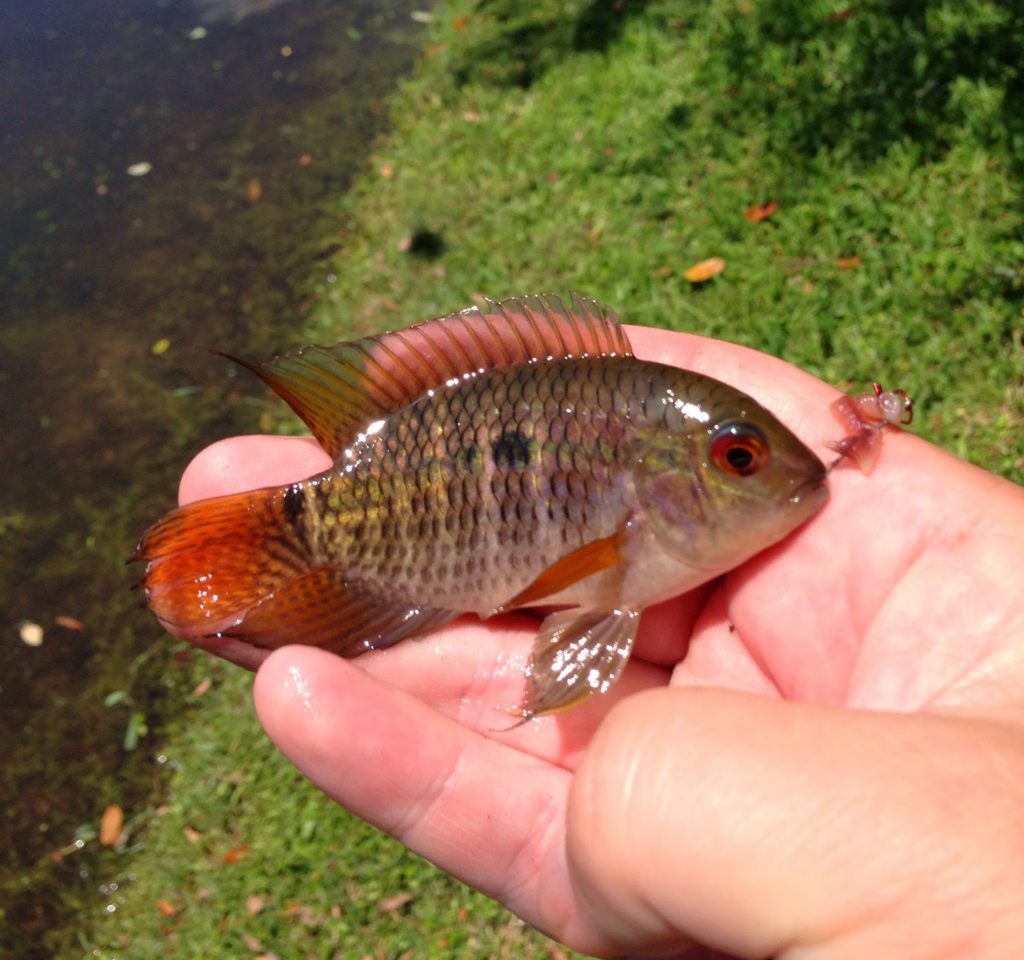 Color can vary widely in cichlids, even within the same species, making them tricky to identify. Chanchita tend to range from metallic green to light blue. 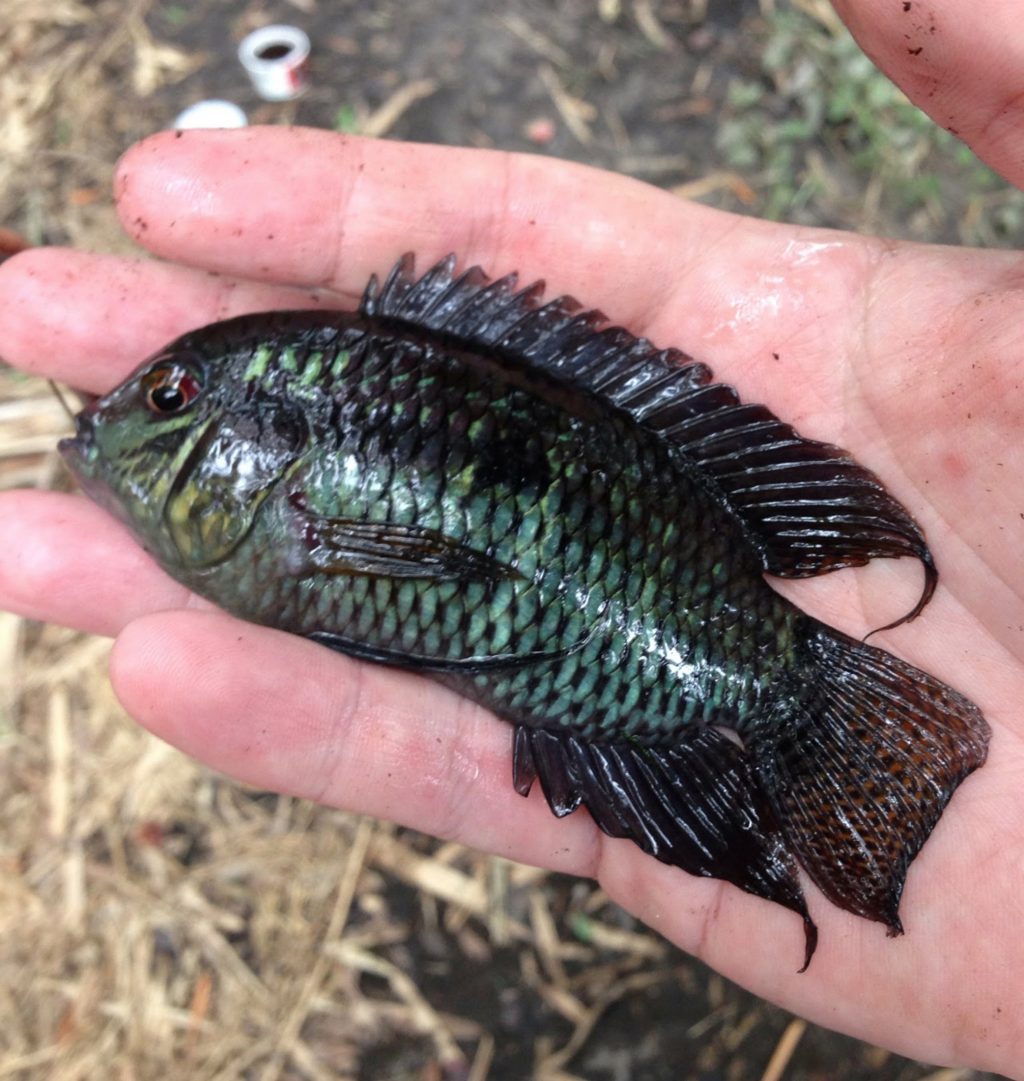 Chanchita have been found in several Florida springs where they could compete with native species for habitat and resources. 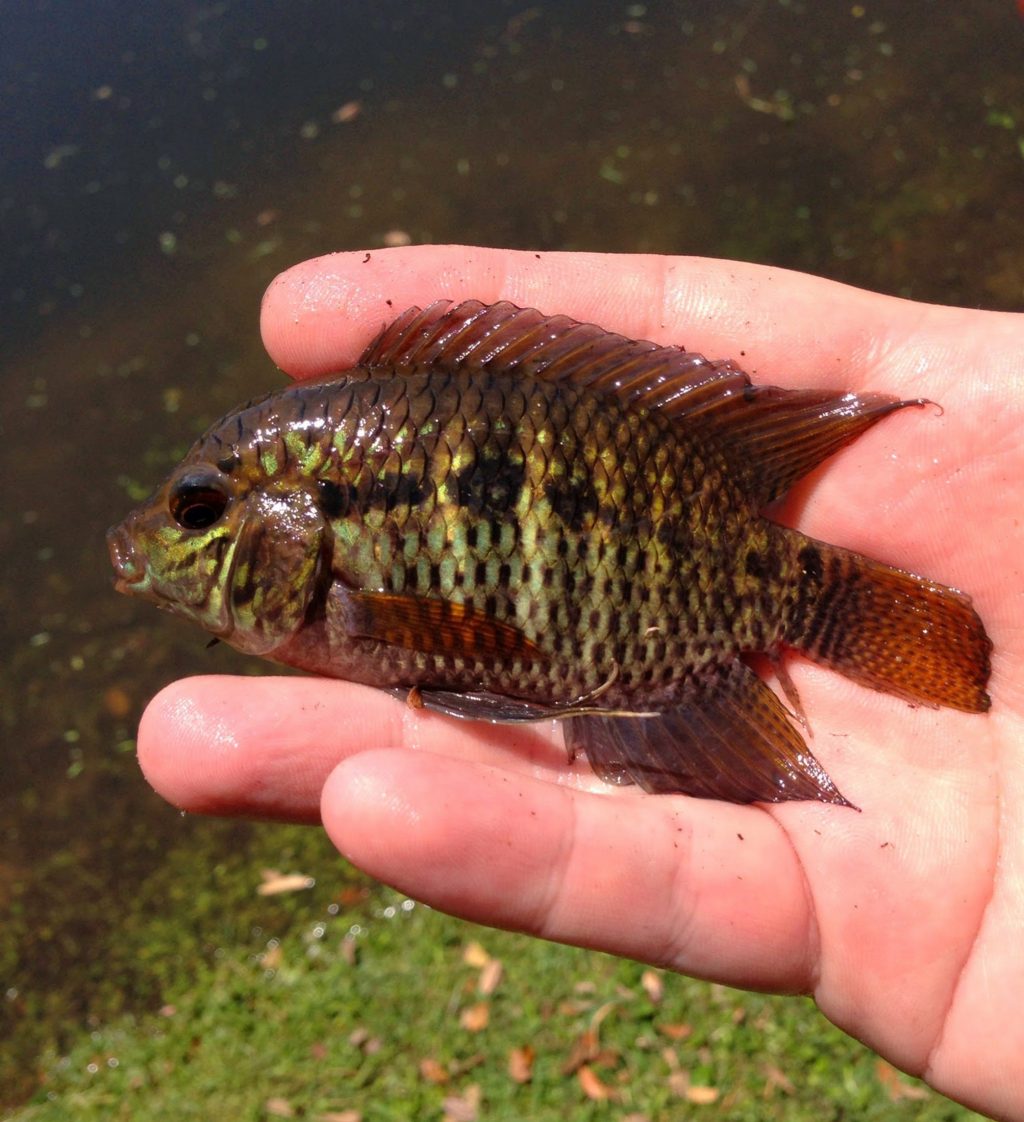 This chanchita was one of several specimens originally identified as black acara in a FishMap.org article. Queries from sharp-eyed amateur fish collectors spurred experts to take a closer look.

Robins said that life color, or how a fish appears in its environment, was likely an essential indicator to amateur collectors the chanchita had found its way to Central Florida. Cichlids can change color according to their surroundings, temperament and time of day. But the colorful variations between species disappear in a laboratory setting, where they’re often preserved in alcohol and lose nearly all coloration.

“When we started going out into the field and collecting them and actually finding them in breeding condition or as dominant males, they’re stunningly beautiful,” Robins said. “I think that’s what the amateur community was keying in on. They’re the ones detecting life color, and that was really instructive in determining this was a different species.”

Once the researchers determined the Tampa invader wasn’t a black acara, it came down to microscopic differences in physical characteristics to identify the species as the chanchita. They relied on CT scanning to zoom in on the number of teeth in the specimen’s outer lower jaw and tiny fingerlike structures along the fish’s fourth gill arch.

The Florida Museum’s ichthyology collection was instrumental in providing insight into the chanchita’s invasion timeline, with specimens dating back 20 years. These specimens had been incorrectly cataloged as black acara, but were key indicators of when the chanchita colonized Central Florida, where the species formed reproducing populations as early as 2000.

Brown said non-native fish species like the chanchita have the potential to impact Florida’s aquatic ecosystems by outcompeting native fishes for habitat and food resources.

“Locating and identifying non-native fishes requires an interdisciplinary approach and coordination with partners from across the state,” she said. “This finding is leading us to look at other non-native fish species – it’s possible that there may be other fish out there that are misidentified, and properly identifying the species is critical for proper management.”

Florida is a welcoming arena for invaders to compete with native species and one another due to the state’s intersection of tropical and temperate climates. Constant invasions pose a challenge to conservationists and can often threaten already-endangered native species. Robins said Florida waters could be the chanchita’s first chance at meeting the black acara – and what happens afterward is anyone’s guess.

“Will they hybridize? Would it matter other than just making things more confusing? Are there other species of acara that have been let loose and established populations? What’s actually happening in the environment?” Robins said. “Florida’s aquatic ecosystems are, in a nutshell, one big experiment.”

Robins, Brown and Crutchfield published their work in BioInvasions Records.

The research was funded by the U.S. Geological Survey’s Invasive Species Program. CT scans were funded by the National Science Foundation-supported oVert project.