by Stephenie Livingston • July 14, 2015
Florida Museum of Natural History Ornithology Curator Dave Steadman works delicately to uncover a fossil during the 2015 Hummingbird Challenge. Steadman began managing the site in 2005 and started the Hummingbird Challenge, which shifted the research focus from fossil horses to fossil birds. During this annual excavation, participants camp on-site, enjoy three homemade meals a day and listen to evening lectures by Steadman and other experts. Florida Museum photo by Kristen Grace

Places like the Hell Creek Formation in Montana and the La Brea Tar Pits in Los Angeles echo famous prehistoric discoveries. But at the bottom of a sinkhole near the small Florida town of Bell in Gilchrist County lies the richest Early Miocene vertebrate fossil locality in the world, known as Thomas Farm. Since the 1930s, researchers have pulled 18.5-million-year-old fossilized horses, bear dogs, rhinoceros and other long-extinct animals ranging from tortoises to tiny song birds from the site’s damp clay, resulting in more than 100 new species.

“Everyone thinks it’s tedious, but, you have to think, I’m the first human to ever touch this,” said Sharon Holte, a Florida Museum doctoral student studying fossil carnivores from Thomas Farm, as she slowly dusted off a bone from an extinct carnivorous mammal, possibly a canine, at the site in spring 2015.

Clarence Simpson of the Florida Geological Survey discovered the first fossils at the 40-acre Thomas Farm in 1931. Famed paleontologist George G. Simpson, then of the American Museum of Natural History in New York, recognized the fossils’ significance and published the first scientific paper on Thomas Farm in 1932. Ownership of the site passed from Harvard University to the University of Florida’s zoology department in the ‘40s, where pioneering herpetologist and conservationist Archie Carr took over its management until the Florida Museum of Natural History on the UF campus began hiring paleontologists for the first time in the early ‘50s.

“It was hot, dirty work in those days,” said Florida Museum ornithology curator David Steadman, who took over management of the site with museum paleontologists Richard Hulbert and Art Poyer in 2004. Due to the heat, humidity and mosquitos that plague North Central Florida summers, excavations typically take place from mid-October through mid-May. Dig participants camping for several days on-site endure the tropical elements, dust, mud and bugs to unearth discoveries like the skulls of a large bear dog and a dwarf alligator. The modern relatives of Thomas Farm’s fossilized animals—foxes, snakes, toads and others—roam the farm and woodland landscape, with its large, moss-draped oak trees covered with lichen.

The site has a pole barn with picnic tables, a rustic outdoor kitchen, a bathroom and a hot water heater, but these recently added amenities were not available for the site’s earlier researchers. In fact, researchers in the ‘80s filled a cow trough with water from a small on-site well to screen excavated clay for small fossils by dipping the screens in and out of the water. The Florida Museum’s earliest paleontologists recognized the importance of screening for small fossils, instead of only focusing on larger species, to develop an overall picture of the site and provide evolutionary context to the new discoveries.

“Under a microscope, it’s just like looking at big things–it’s just as exciting,” Poyer said as he examined previously screened microfossils left in the sun to dry during a spring excavation. “The cool thing about microfossils is that small animals tend to stay in one place while large animals often travel, so the small stuff serves as environmental indicators of habitat.”

At many famous sites, fossils are actually rare and one might dig for days before finding a single tooth. At Thomas Farm, however, fossils are abundant and everyone who digs finds something, making it one of the best locations for teaching paleontology in North America, Steadman said.

“When fossils are rare, you have a hard time identifying what the range of variation within a species might be,” Steadman said. “With the horses and so many other species at Thomas Farm, we can put together the whole picture, from young, adults, right through older horses, which we know were aged because their teeth were worn down. We have the advantage of looking at the entire age series of extinct species.”

A hundred years from now, Steadman says, people will still be digging and making new discoveries at Thomas Farm. 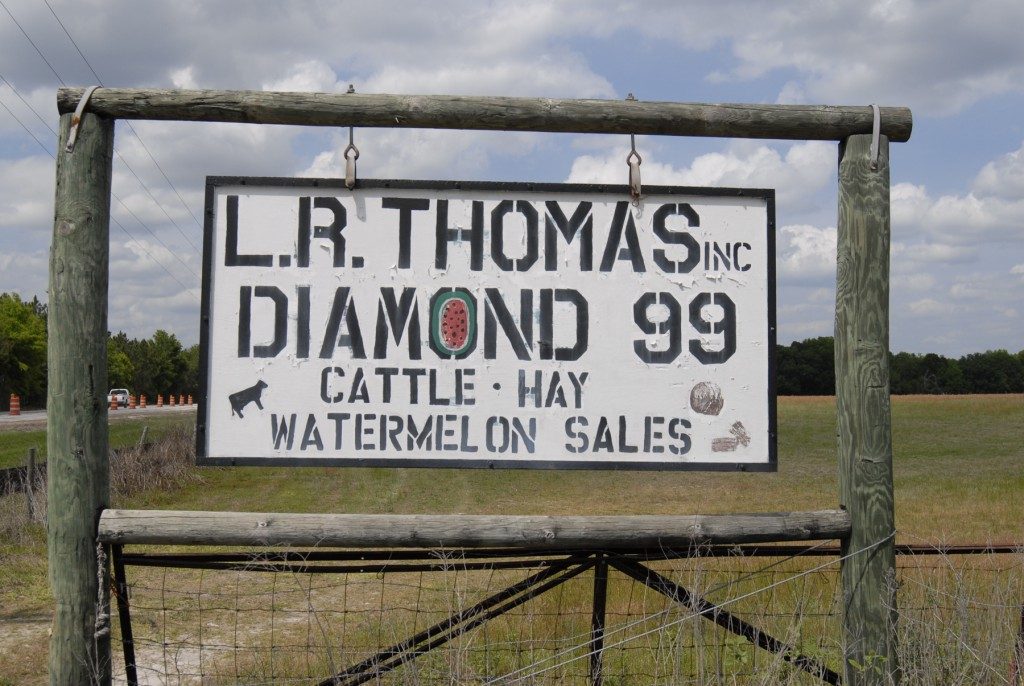 This sign on Highway 129 in Gilchrist County about 8 miles north of Bell marks the turn-off to access the 40-acre Thomas Farm fossil site. 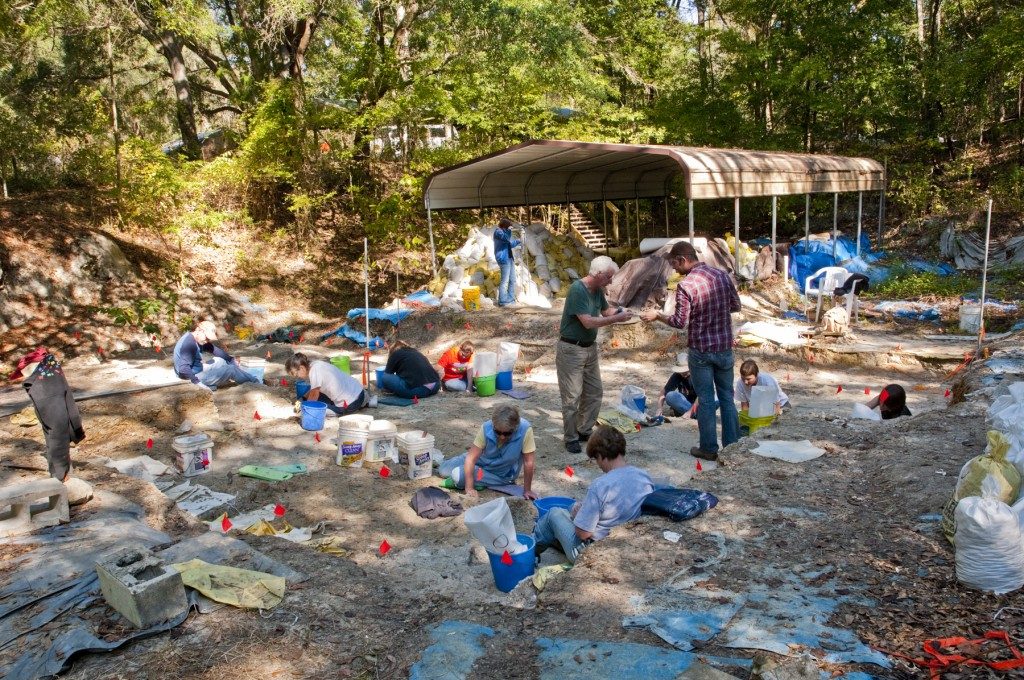 Volunteers work at the fossil site during a 2010 event. 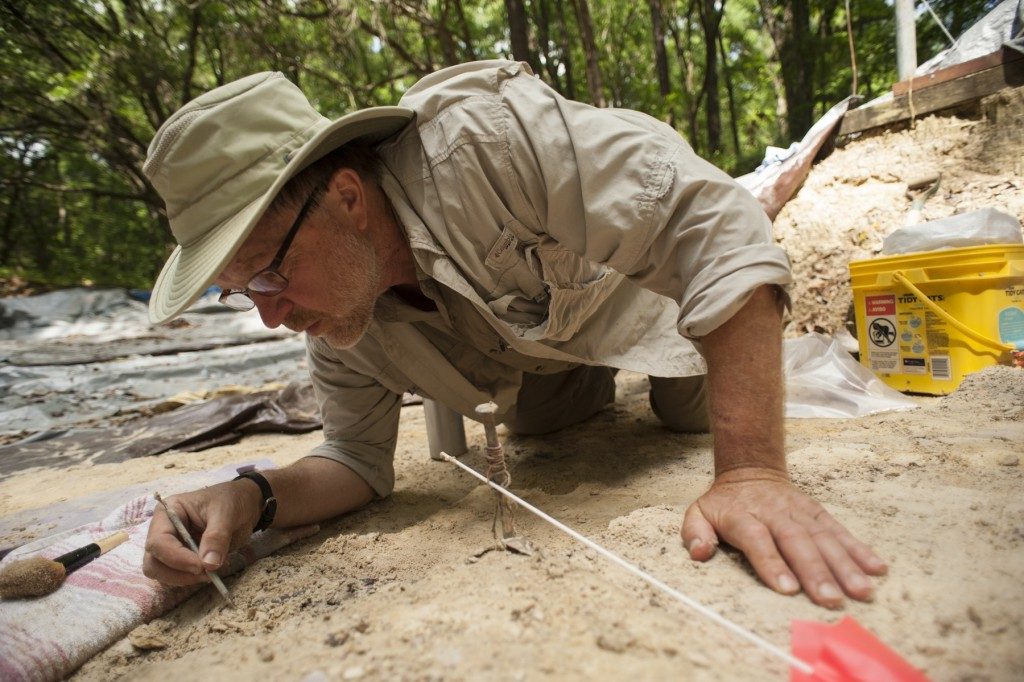 Florida Museum of Natural History Ornithology Curator Dave Steadman works delicately to uncover a fossil during the 2015 Hummingbird Challenge. Steadman began managing the site in 2005 and started the Hummingbird Challenge, which shifted the research focus from fossil horses to fossil birds. During this annual excavation, participants camp on-site, enjoy three homemade meals a day and listen to evening lectures by Steadman and other experts. 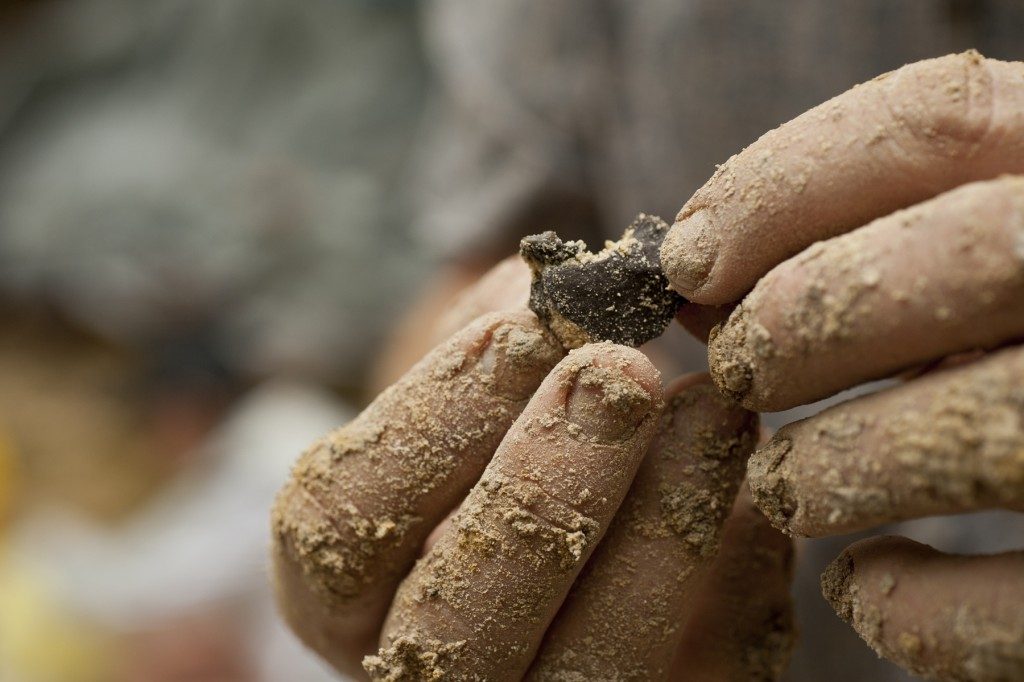 Steadman holds a fossilized mandible of an unidentified species discovered in the clay sediment at the Thomas Farm site during the 2013 Hummingbird Challenge. 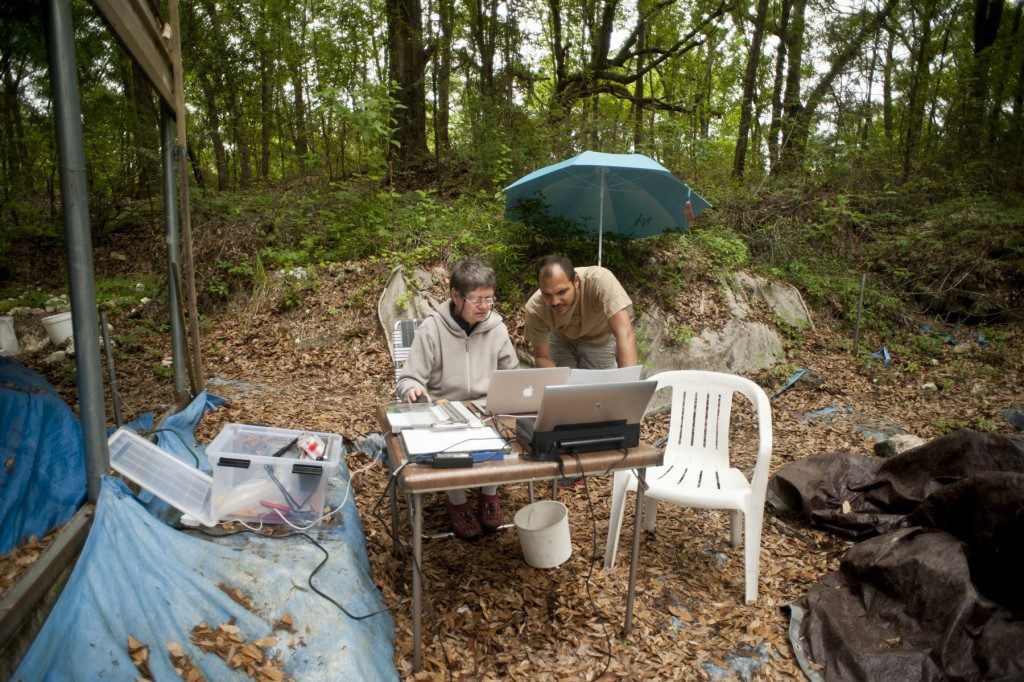 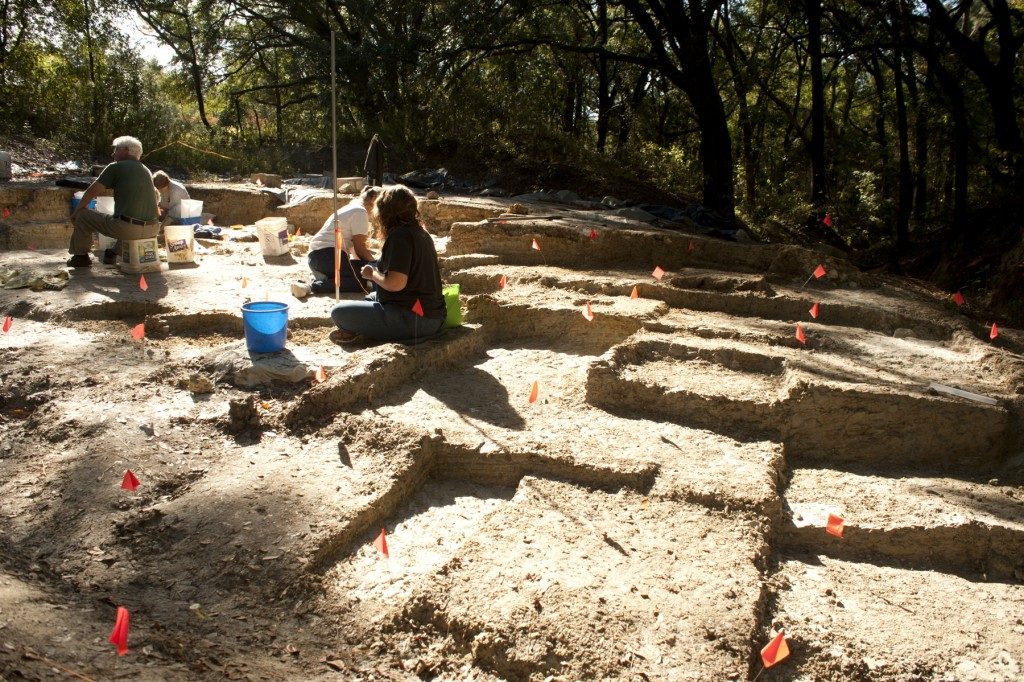 Museum researchers carefully measure and mark plots at the site. Each volunteer works within a plot until a desired depth has been reached before moving to a new area. Some struggle with this rule, as larger fossils sometimes stretch across plot boundaries, but the entire plot must be completed before uncovering the entire fossil. 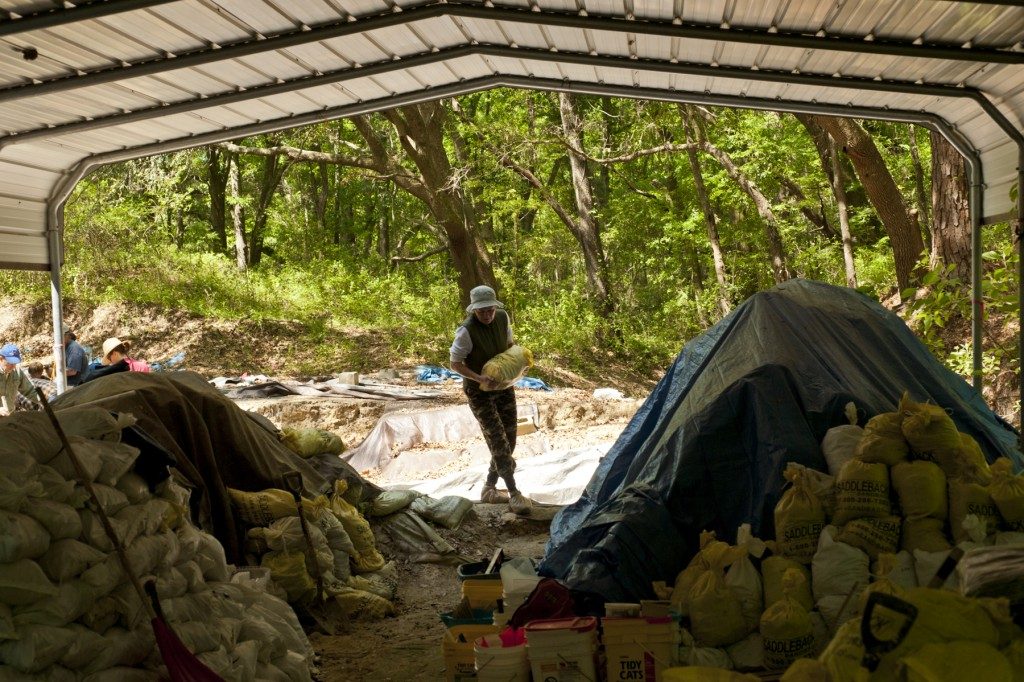 A 2011 Hummingbird Challenge participant, wearing plastic grocery bags to protect her shoes from the mud, carries a bag of sediment to the holding area before it is screened. Each bag is labled with the person’s name and the plot area where they dug the sediment. Located in a sinkhole, the dig pit can become muddy after rainfall. 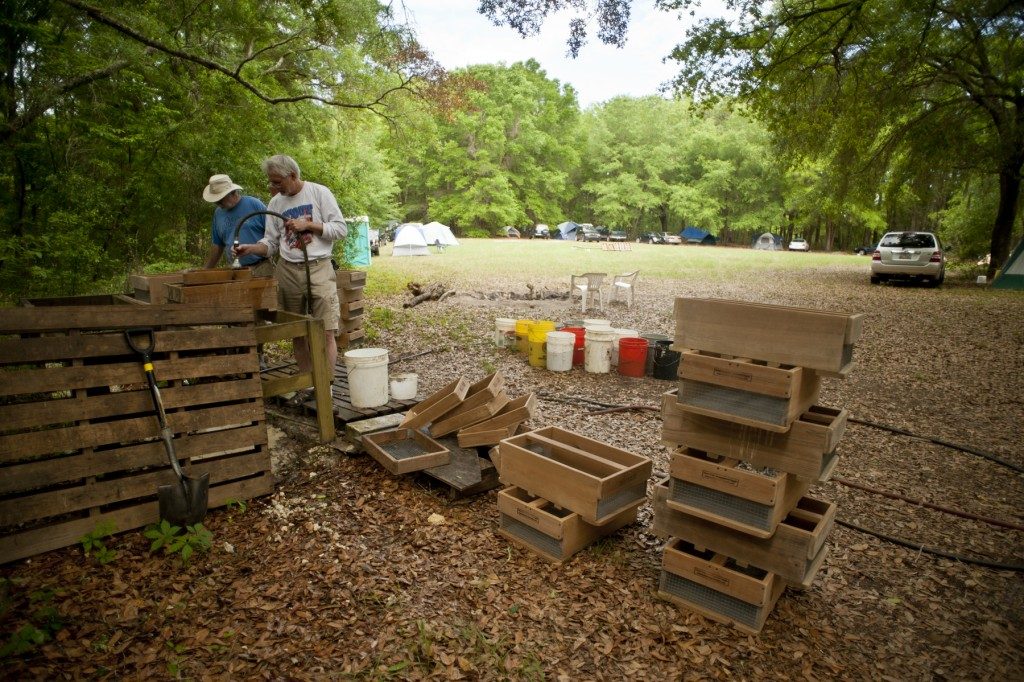 Florida Museum of Natural History biological scientist Art Poyer and a participant work at the wash station during the 2012 Hummingbird Challenge to screen bags of sediment in search of small fossils. After the sediment is washed, the screens and fossil remnants are set in the sun to dry. Dig particpants’ tents are pictured in the background. 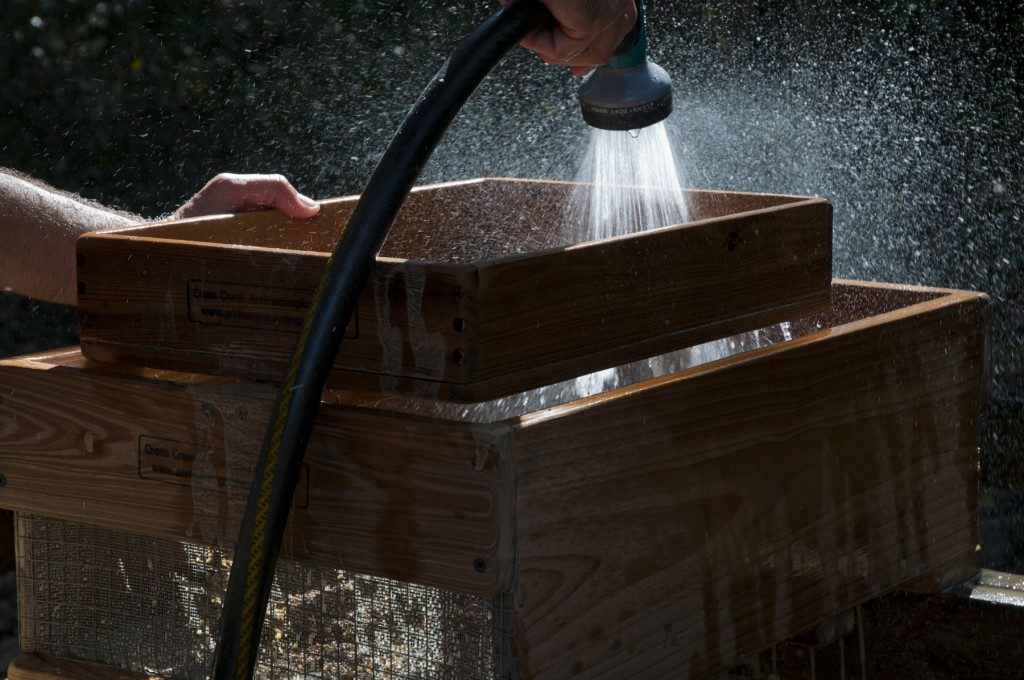 A volunteer washes sediment through a screen to search for small fossils. 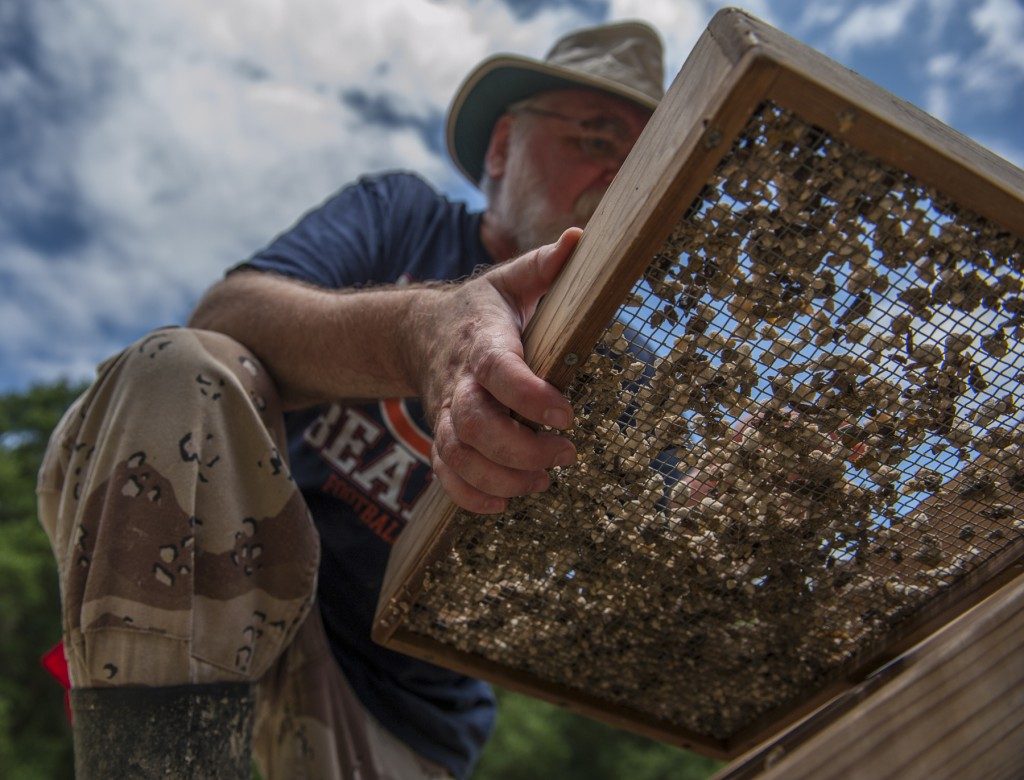 Poyer, a long-time museum employee and Thomas Farm participant, looks over material after it has been screen-washed and dried in the sun. 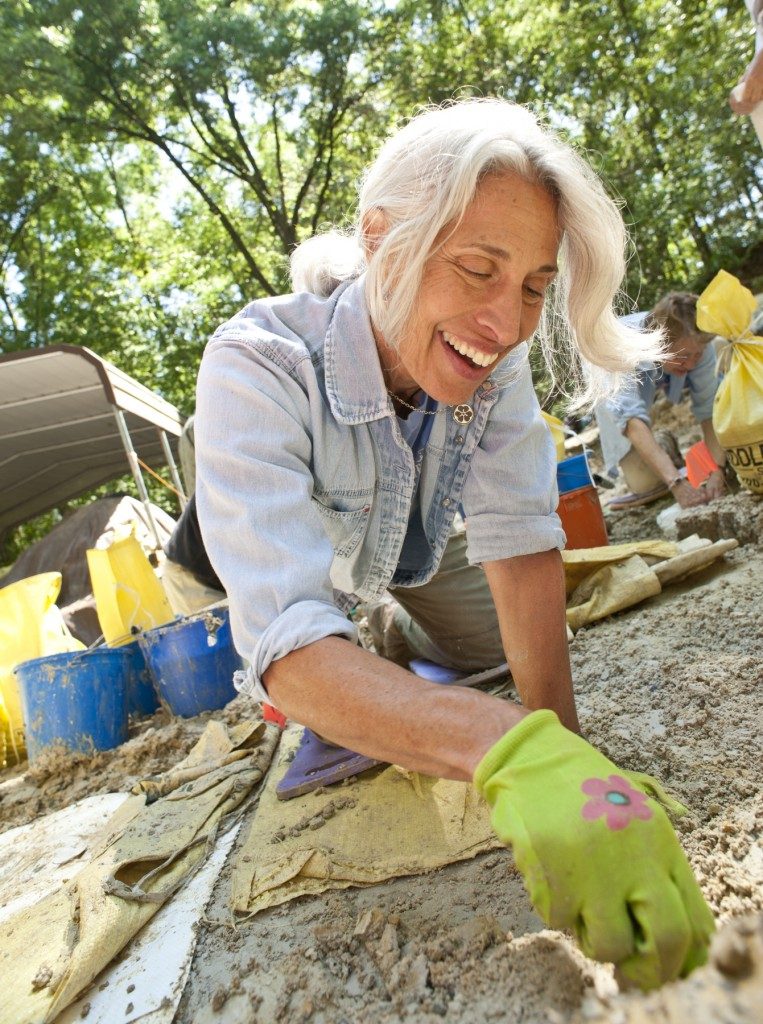 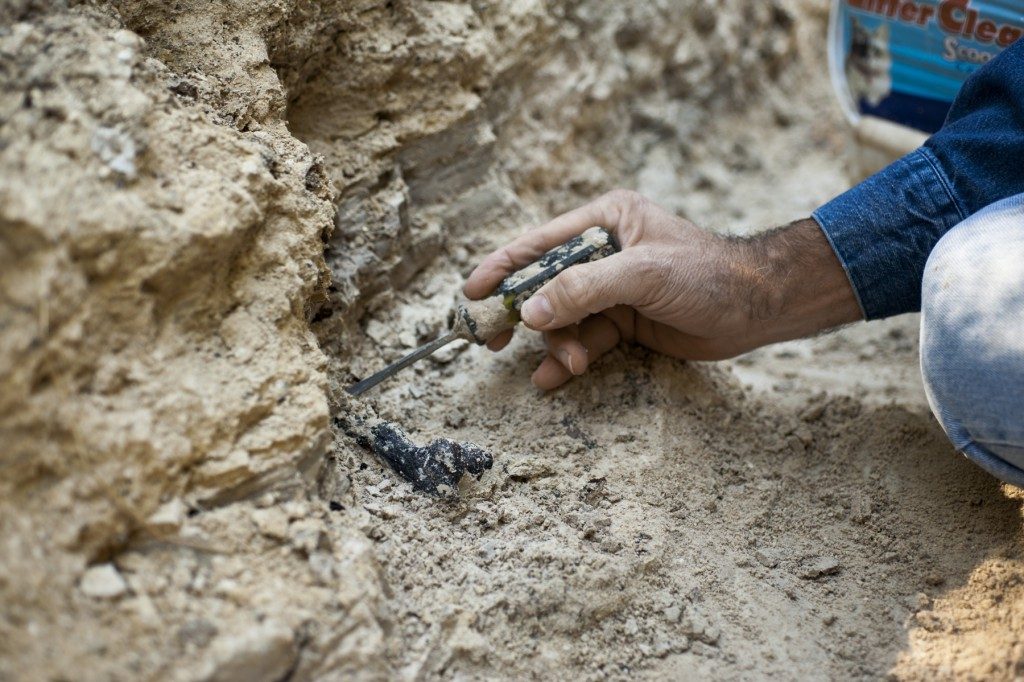 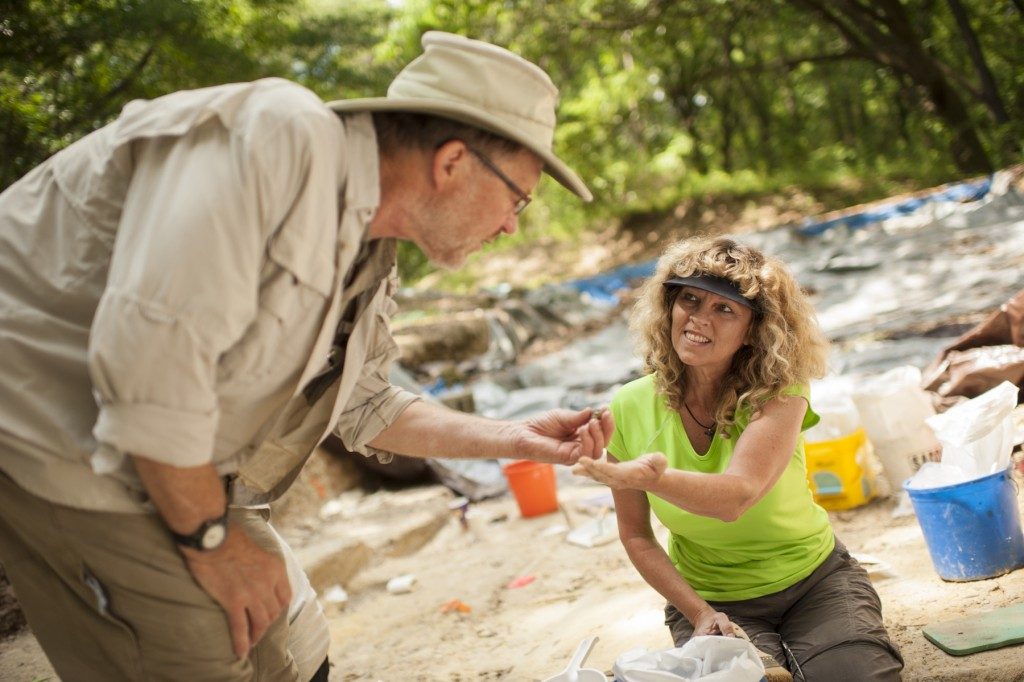 Steadman identifies a fossil for Cindy “Lucky” Lockner during the 2015 Hummingbird Challenge. Steadman says Thomas Farm is an excellent teaching location because the abundance of fossils allows every participant to experience the feeling of discovery. 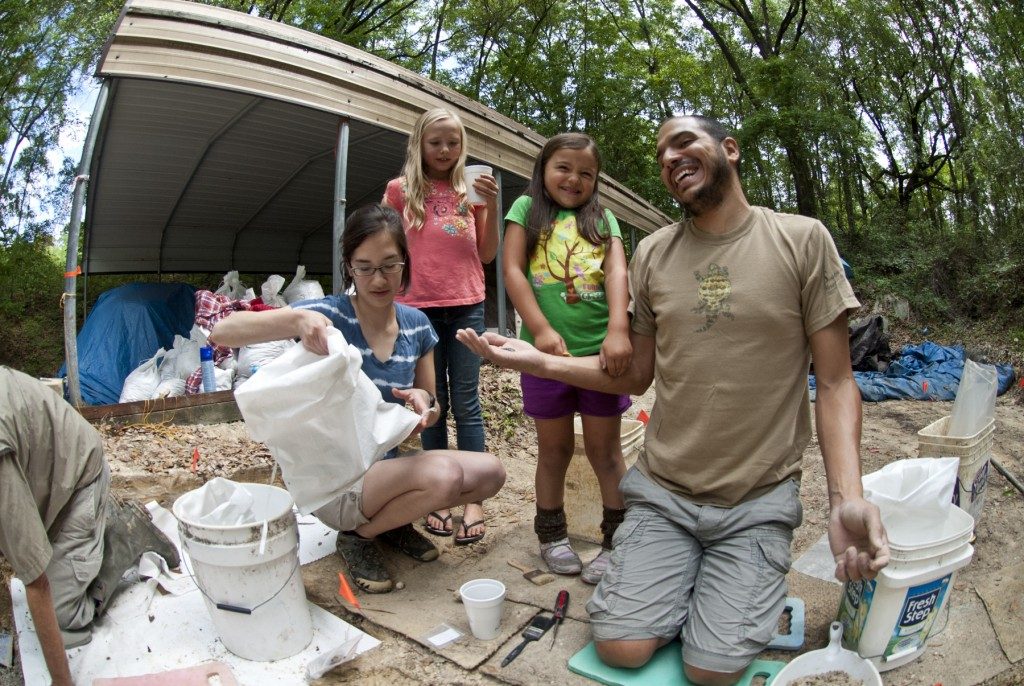 Soto-Centeno, right, shares a laugh while discussing a fossil with his daughter Karina Soto-Darner, 5, and former UF undergraduate Oona Takano during a museum volunteer day in 2012. 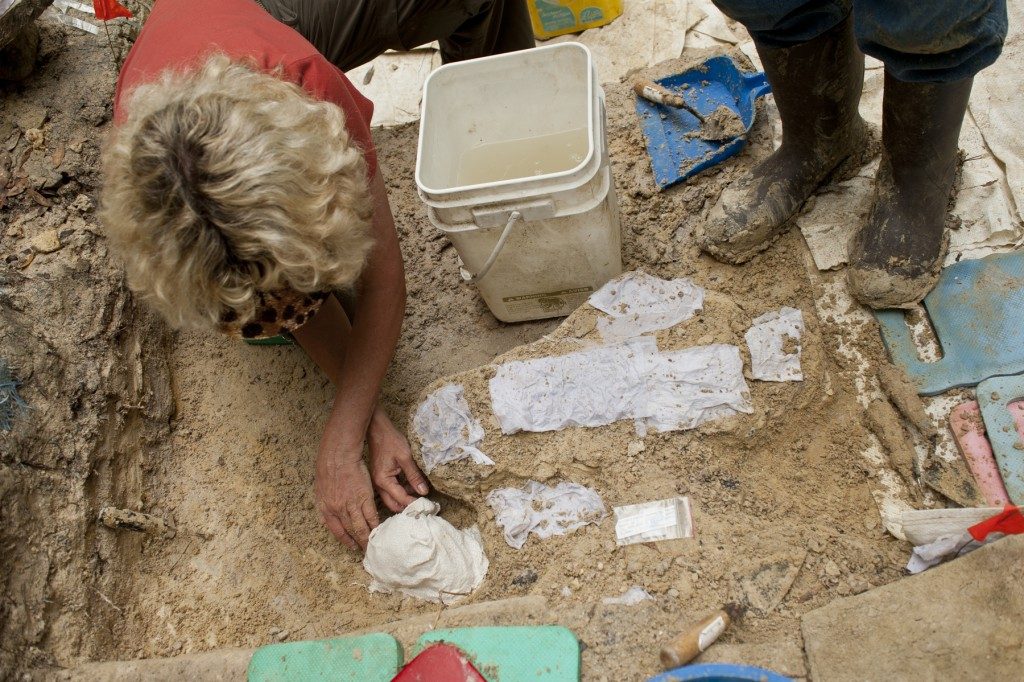 Lockner, a 2013 Hummingbird Challenge participant, forms a jacket with plaster and cloth around a larger and more delicate fossil she uncovered as Steadman (boots) observes. The jacket, once hardened, was removed and sent to the museum’s paleontology prep lab to be processed under better conditions for preserving the fossil. 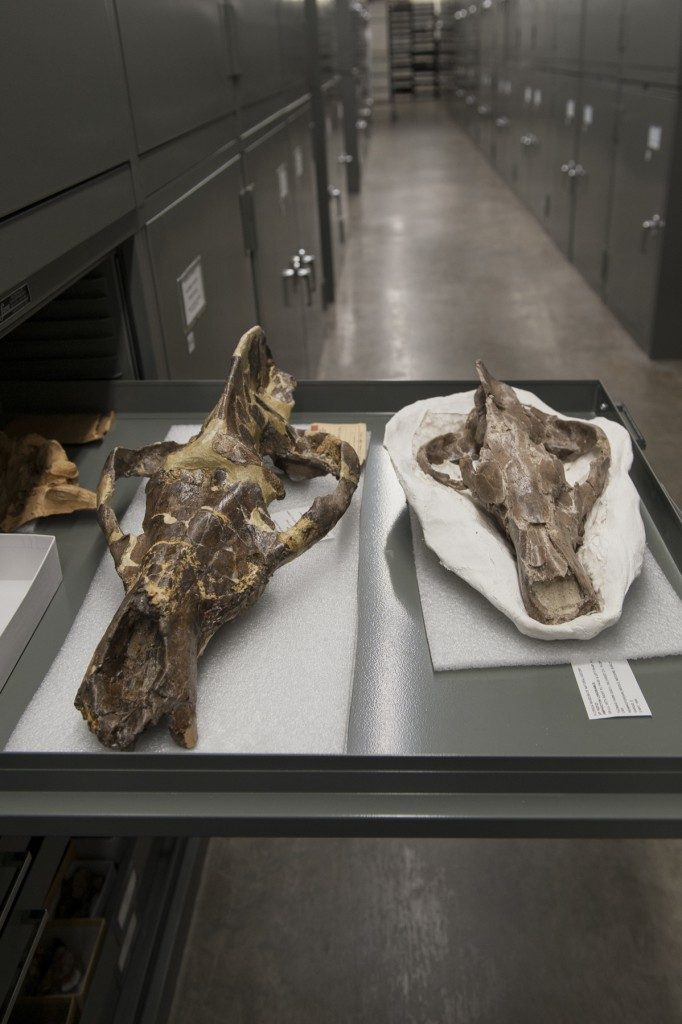 These male and female bear dog skulls unearthed at Thomas Farm have been cleaned, prepped, re-articulated and added to the vertebrate paleontology collections at Dickinson Hall, the museum’s research and collections facility. 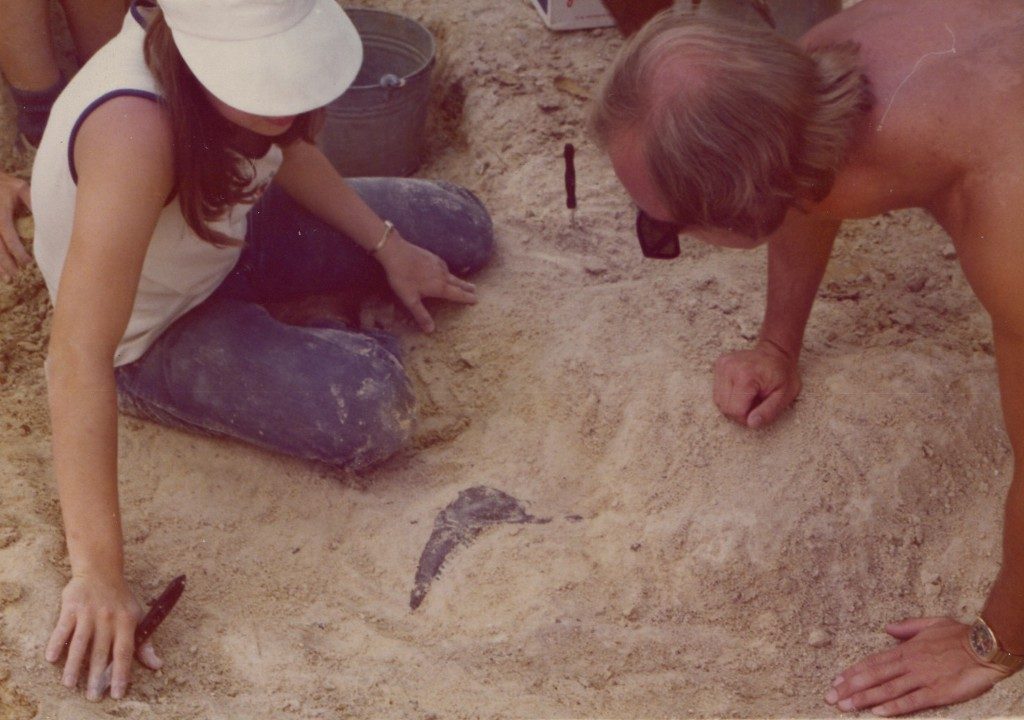 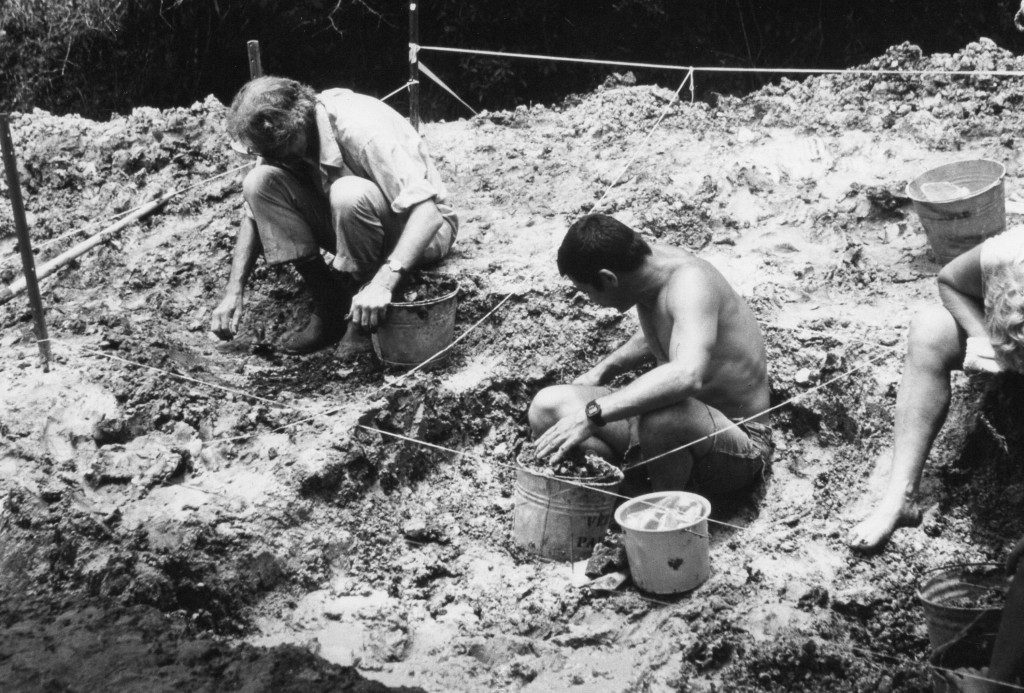 Researchers work at the site in 1974. 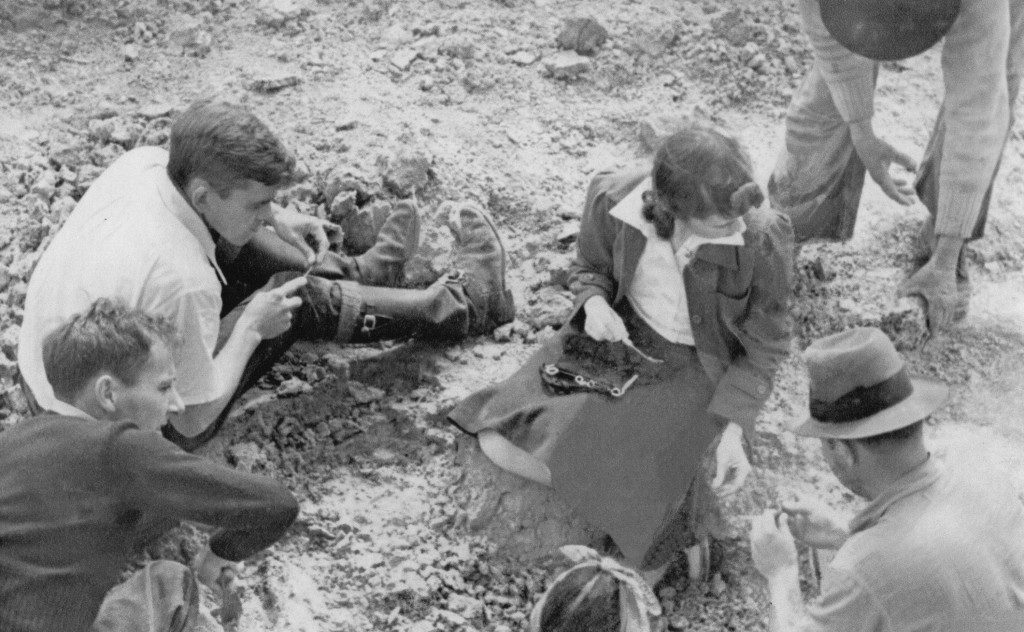 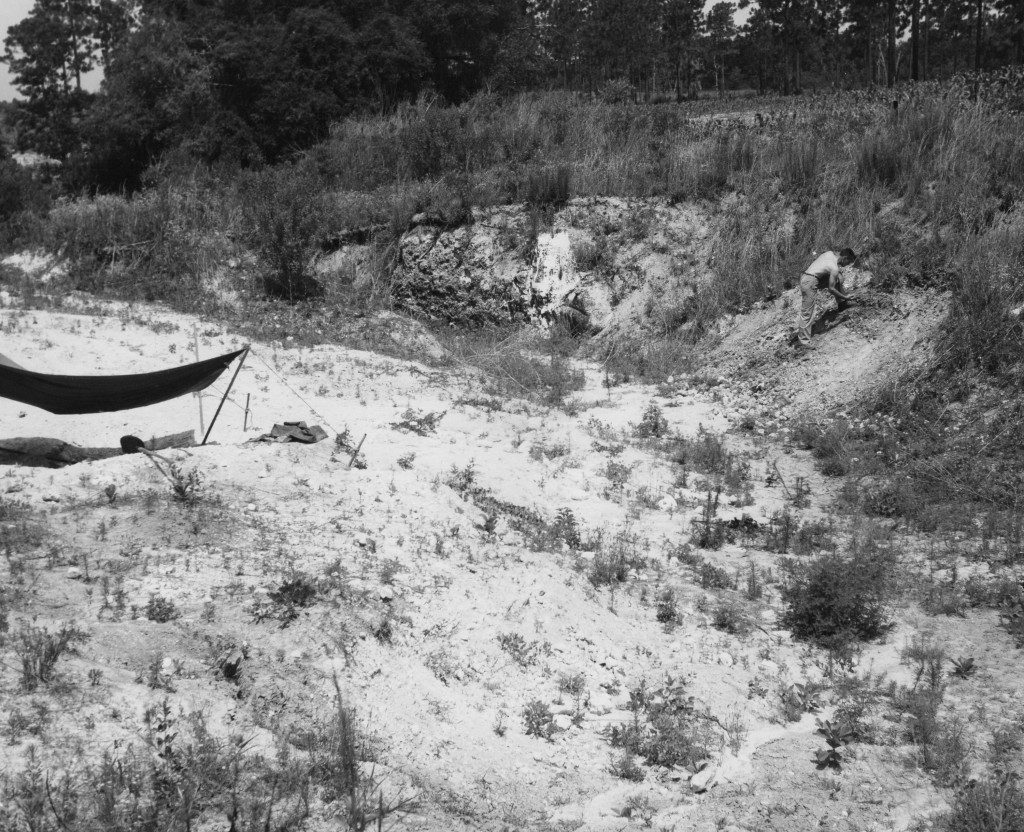 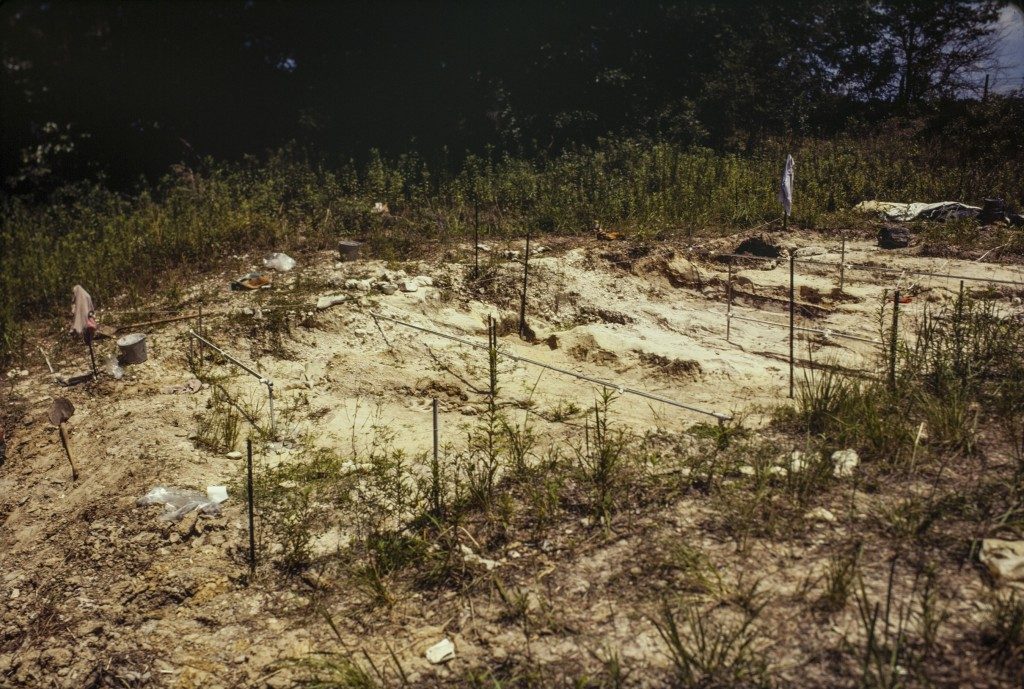 The Thomas Farm site pictured in 1984.

Learn more about the Vertebrate Paleontology at the Florida Museum.