Researchers made the discoveries during their second field season tracking the obscure bee in Central Florida’s sand pine scrub habitats. Their findings will help inform conservation and land management efforts and a federal assessment on whether the blue calamintha bee qualifies for protection under the Endangered Species Act.

“The ultimate goal is to keep this bee around for the foreseeable future,” said Jaret Daniels, Florida Museum curator of Lepidoptera and the project’s principal investigator. “Studying and understanding more about individual species is most impactful for us when it leads to steps for helping conserve the organism.”

First described in 2011, the blue calamintha bee, Osmia calaminthae, was known from only four locations on Lake Wales Ridge until museum researcher Chase Kimmel documented new populations in 2020. Over the past two field seasons, Kimmel and field technician Clint Gibson have observed the bee at 11 new locations, including Ocala National Forest, giving scientists valuable insight into the species’ potential range.

The bee’s primary home, Lake Wales Ridge, is a 150-mile-long sandy spine running down the center of the state, the remnant of ancient islands in Florida’s distant past. The region harbors plant and animal species found nowhere else, but ranks among the nation’s fastest-disappearing ecosystems, with pockets of natural habitat surrounded by citrus groves and suburban neighborhoods.

Using Archbold Biological Station as a home base, Kimmel and Gibson logged hundreds of hours surveying conservation lands, but recorded blue calamintha bees fewer than 100 times, many of which could have been the same individuals. When Kimmel marked individual bees to track their movements, he often saw them later in the same area – even at the same shrub. DNA analysis will help reveal how genetically isolated the bee’s populations may have become over time. Sequencing its genome may also provide insights into other species within the Osmia genus, including the blue orchard bee, which is an economically important pollinator in agriculture.

Kimmel said that while he gets “a little bummed” as he drives through the region, watching bulldozers overturn the ridge’s fragile habitat, this year’s field season also sounded a note of hope: The site at which the team confirmed the bee’s second pollen host plant, false rosemary, is a former citrus grove now restored to pine scrub. 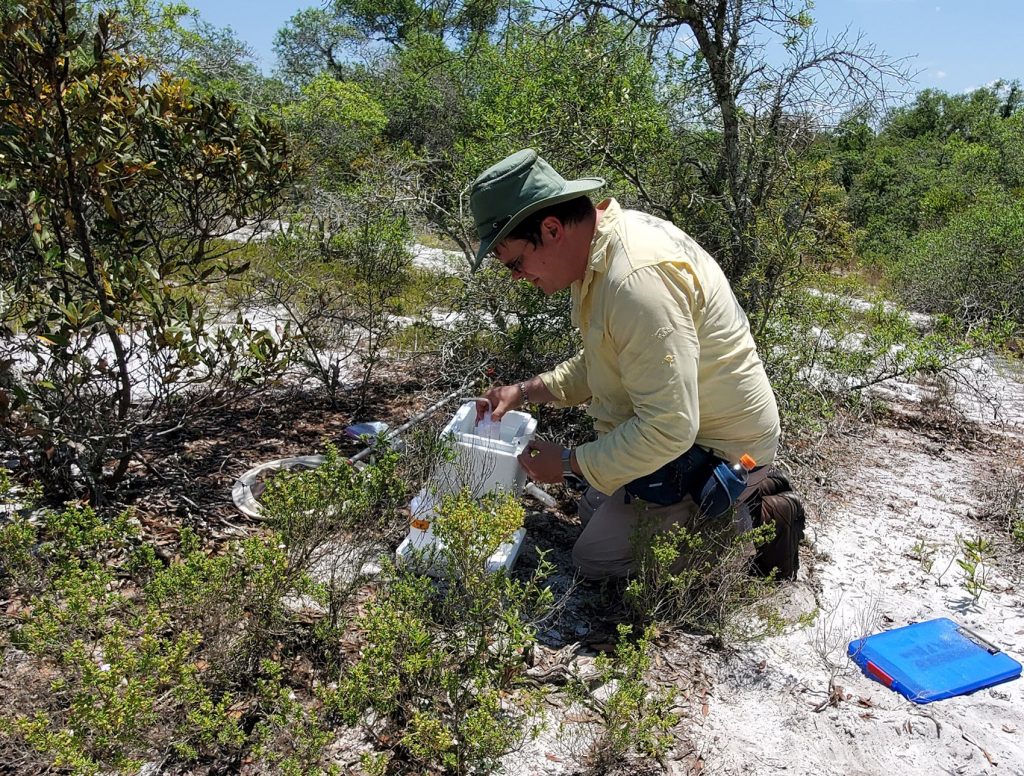 Kimmel surveys sand pine scrub for the blue calamintha bee. He has observed bees he previously captured and marked foraging at the same bush at the same time on subsequent days, raising questions about the bee’s range and how far they travel for food. 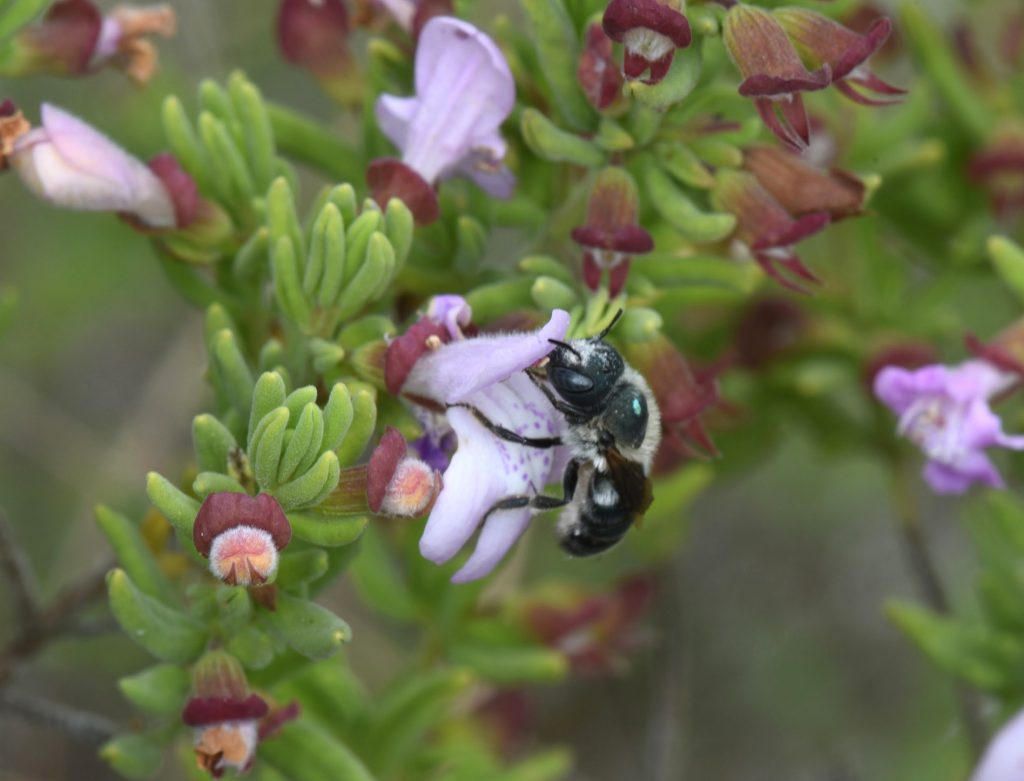 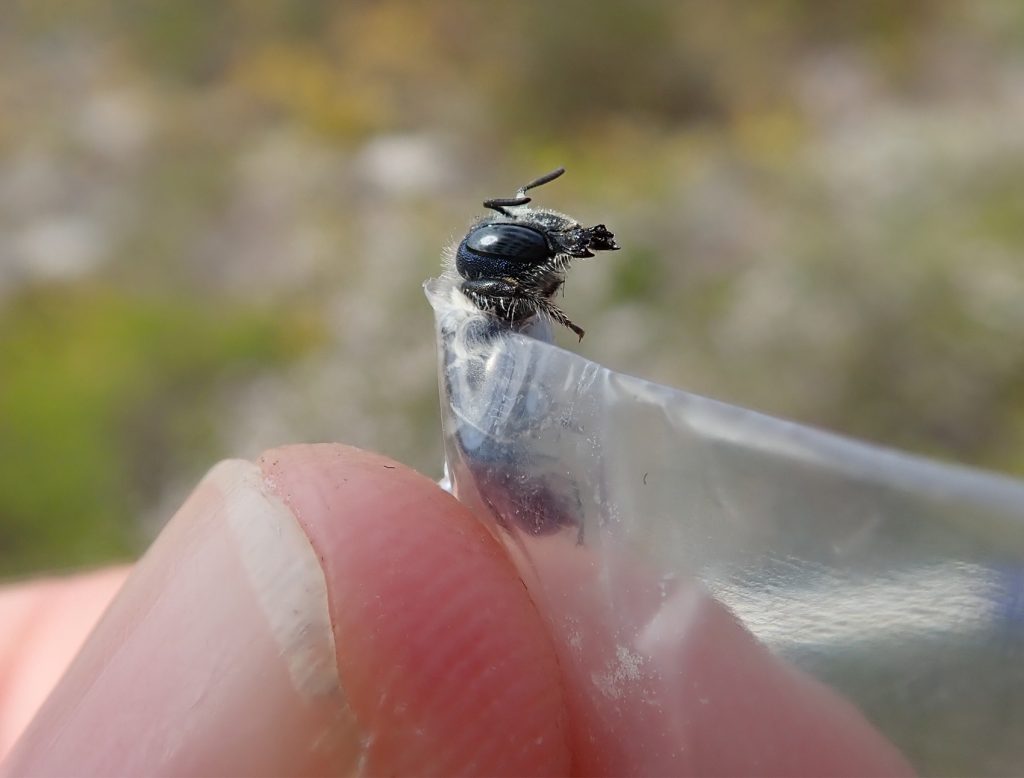 Kimmel observes a blue calamintha bee before its release. The bees are fast flyers and about the size of a chickpea.

The bee’s common name comes from its main host plant Ashe’s calamint, Calamintha ashei, itself a threatened species in the state. False rosemary, Conradina brevifolia, is even rarer, listed as endangered at both state and federal levels. Researchers learned the blue calamintha bee visits false rosemary earlier in the year, before Ashe’s calamint is in bloom, leading to concerns about food availability if warming temperatures decouple the timing of the plant’s blossoming from the bee’s emergence in February.

The team also collected pollen samples from blue calamintha bees to determine whether they visit other plant species.

“It’s a story of a really rare bee using a really rare series of plants,” said Daniels, who is also a professor in the UF/IFAS entomology and nematology department. “This bee could be closely tied to the pollination of these endangered plants.”

The blue calamintha bee’s underground nesting habits came as a surprise to the researchers, who expected it to use hollow stems or holes in dead trees, as many of its close relatives do. Given how few bees the team observed and how fast they fly, the discovery of the nest was “just kind of pure luck,” Kimmel said.

Gibson was assessing a site with blooming false rosemary at Lake Wales Ridge when he happened to see a bee zip toward a small sedge and disappear into the root structure, leading him to a nest. He later found a second nest nearby, possibly made by the same bee as a way of spreading its resources and offspring, and researchers also located two nests at Ocala National Forest. Daniels said nesting within the sedge’s root system might help stabilize the deep sugar sand that characterizes these ecosystems. 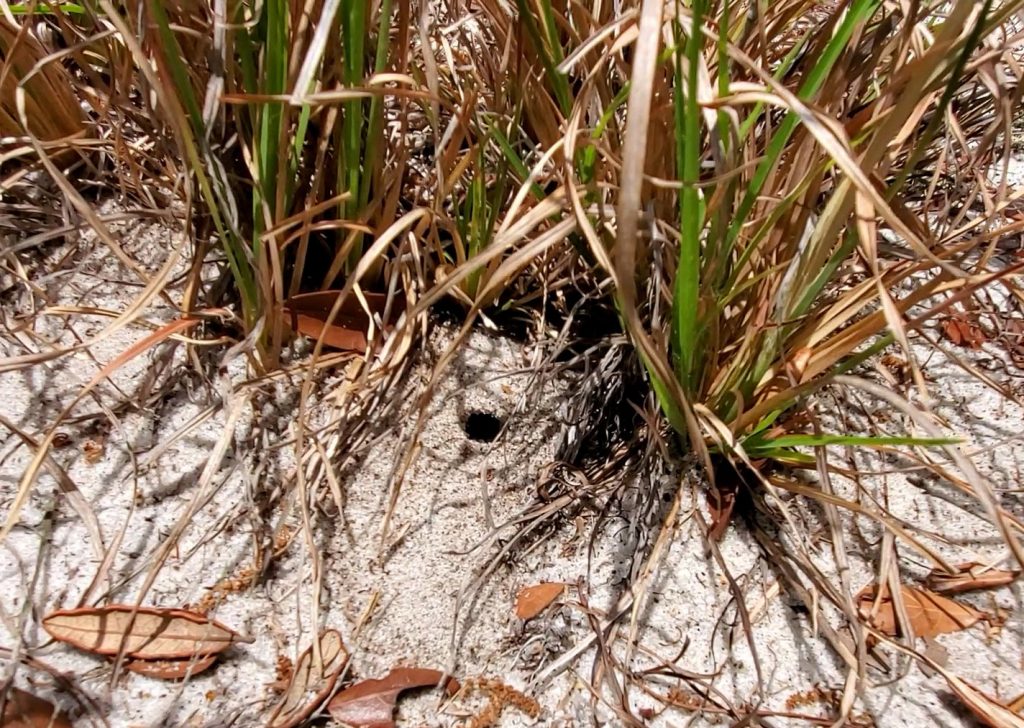 This small hole is the entrance to a blue calamintha bee’s nest in Ocala National Forest. Researchers hope to determine the bee’s nest structure in future work. 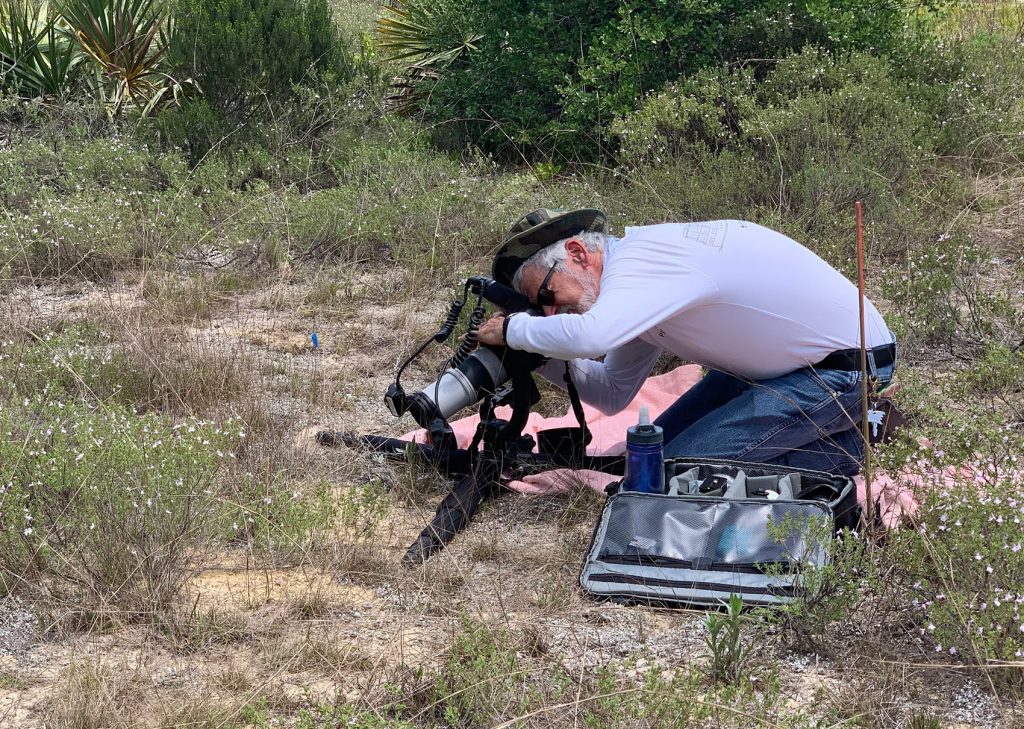 Florida Museum volunteer Tedd Greenwald photographs a blue calamintha bee’s burrow. Principal investigator Jaret Daniels credited the success of the fieldwork to the hard work of the team of scientists and volunteers.

The revelation that the bee is a ground nester will help the team make recommendations to local land managers, as pine scrub ecosystems evolved under a rhythm of fire and undergo prescribed burns today. While the blue calamintha bee’s brood chamber may be deep enough underground to withstand the heat of a burn, some areas are converted to firebreaks by overturning top soil, which might disturb bee nests. Ensuring burns happen in a mosaic pattern or on a rotational basis could also help preserve the food resources on which the bee relies, Kimmel said.

Last year’s news that scientists had found the blue calamintha bee unexpectedly rocketed the insect to international celebrity status when many people were under COVID-19 lockdowns and spending more time outside. Kimmel and Daniels’ inboxes flooded with reports of blue bee sightings. None thus far have been confirmed as the blue calamintha bee – Florida is also home to a number of more common blue bee species – but the researchers were bowled over by the amount of public interest in such a little-known insect.

“People tend to think what entomologists do is kind of strange, so it’s exciting to see the public get excited about this,” Kimmel said. “I can’t deny that it was a bit overwhelming at times, but there was also a reassuring sense that what I’m doing and my passion in life for conserving, restoring and finding management practices that help organisms thrive has meaning. It feels good to have that support.”

By mid-May, blue calamintha bees show the wear and tear of their springtime labor and, as many other bee species do, will eventually work themselves to death. For the rest of the year, all the action happens underground as eggs hatch and the larvae eat food reserves stored by the female bee before they emerge next year as adults. The research team hopes to be waiting for them.

Skeptics may ask whether all the hours tramping through pine scrub to see a handful of metallic blue bees are worth it. Daniels has a response.

“All species are important. Florida scrub is a highly endangered and declining habitat across the state, and ultimately, we don’t know the role this bee plays in that system. We’ve learned a lot about it. What will we learn in the next decade? It’s hard to be cavalier when you start thinking about losing species forever.”

Bees observed in the research project were released unharmed.

Have you seen a blue bee? Find out which species you spotted with this helpful guide to Florida’s blue bees by UF/IFAS.