How bird flocks with multiple species behave like K-pop groups

by Natalie van Hoose • February 12, 2020
The blue-gray gnatcatcher, Polioptila caerulea, is commonly found in North Florida’s winter flocking community. Its hunting techniques include picking insects from live leaves and flashing its white tail feathers to startle insects into flight before catching them on the wing. Live-leaf gleaners made up the largest of four foraging “guilds” identified by Florida Museum researchers. Photo courtesy of Mitchell Walters

Birds of a feather don’t always flock together: Peer into a forest canopy, and you will likely spot multiple bird species flying and feeding together, a phenomenon most spectacular in the Amazon where 50 species may travel as a unit. But are birds in these mixed flocks cooperating with one another or competing?

A new study suggests both.

In an analysis of nearly 100 North Florida flocks, Florida Museum of Natural History researchers found similar bird species were significantly more likely to flock together than hunt alone, working as a group to stay safe from predators while cruising the canopy in search of insects. Species kept competition within the flock low, however, by differentiating their foraging technique, their choice of hunting spot or the general distance they kept from a tree trunk.

“You have to be similar enough to the other members to get along as a group but specialized in some way: There’s the leader, the one who raps, the one who plays guitar,” said Jones, a doctoral student in the University of Florida’s department of biology. “It’s the same with birds. They hang out together because they share things in common, but they can’t share too much. If you’re so similar that you’re eating each other’s lunch, then you have a serious problem.”

North Florida’s winter flocking community is “probably the most complex in North America,” Jones said, featuring dozens of migratory species and a bevy of foraging opportunities. Still, the researchers were surprised to see how specialized the birds’ foraging habits were – a feature more reminiscent of the Amazon than North America. 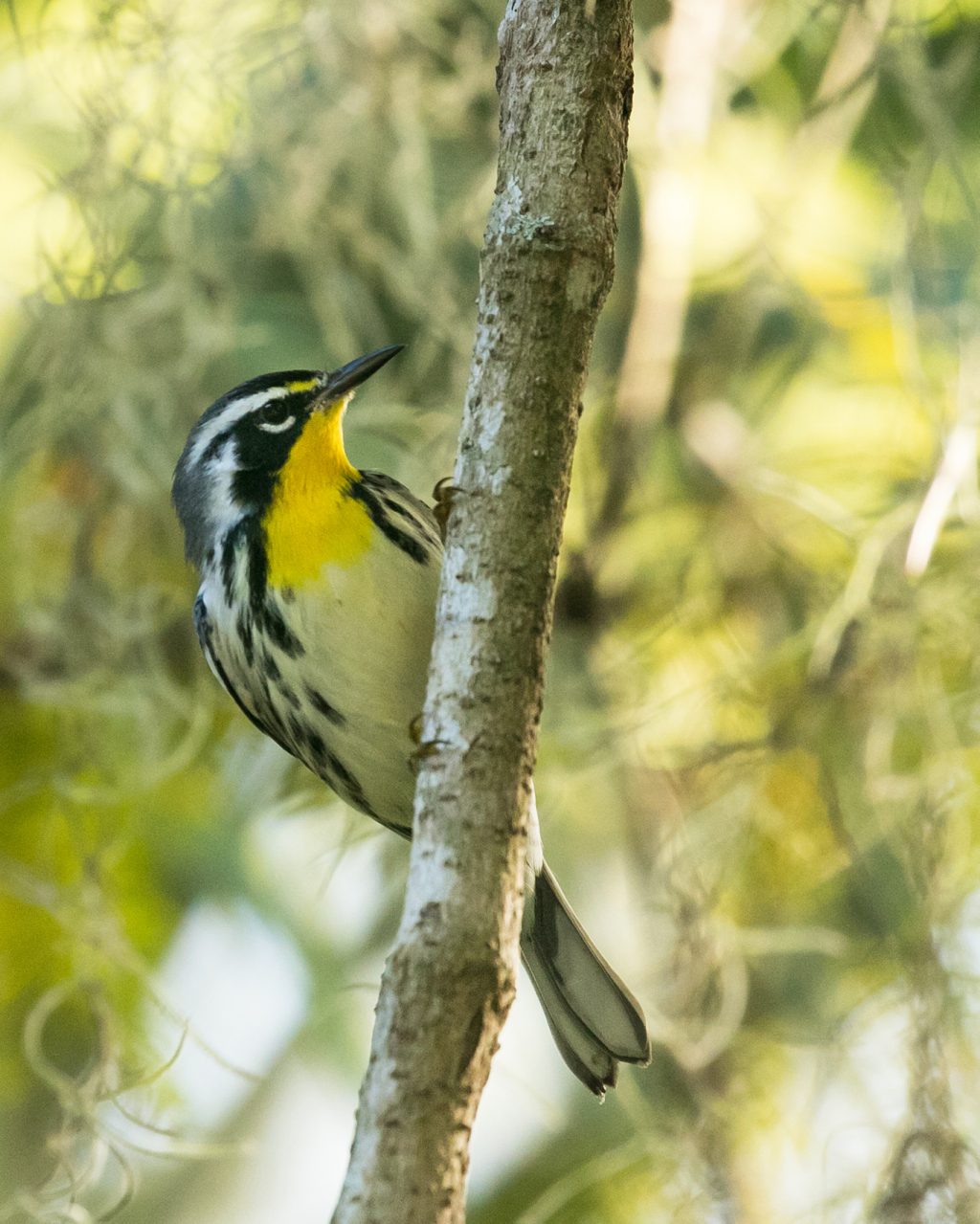 The yellow-throated warbler, Setophaga dominica, eats insects on live leaves during the breeding season in temperate regions. But when it overwinters in Florida, it shifts its foraging techniques, focusing on Spanish moss and palm leaves. 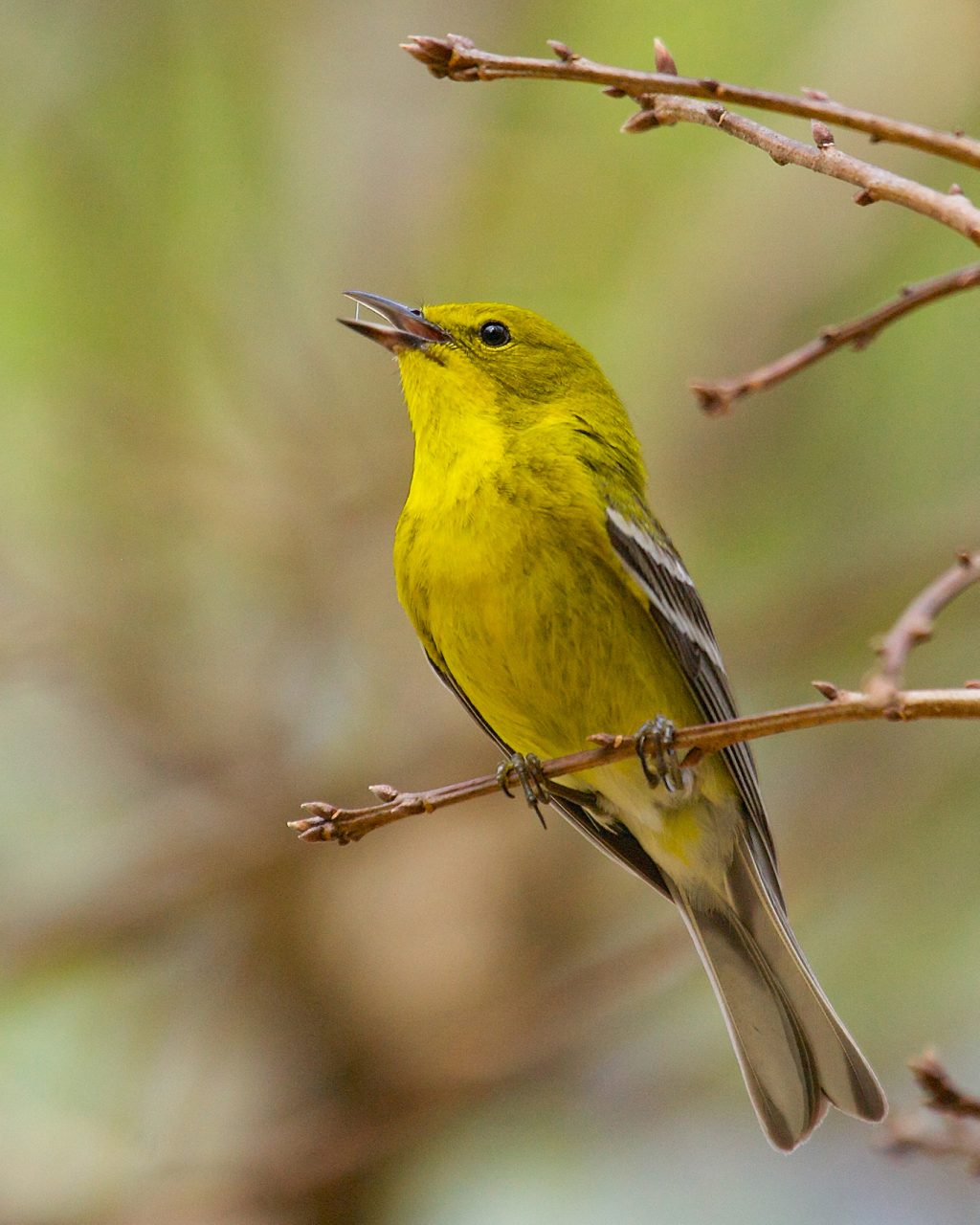 Migratory birds take advantage of Florida’s more tropical hunting spots. Pine warblers, Setophaga pinus, probe air plants, which are absent from their northern breeding grounds. “We were excited to document some good, old-fashioned natural history shifts in foraging behavior, which had not been described for most of these species,” said researcher Harrison Jones.

The study documented previously unknown foraging behaviors in Florida, including the yellow-throated warbler’s habit of hanging sideways or upside down on palm fronds to feed on insects. Orange-crowned warblers probed the interior of dead leaves while pine warblers combed through air plants.

“These are very tropical features – not something I expected to see in a subtropical environment like Florida,” said study co-author Scott Robinson, Florida Museum Ordway Eminent Scholar and Jones’ adviser. Robinson has studied tropical bird species since 1977, with a focus on Central and South America. “Palm trees are not easy to feed from. It takes a very specialized bird using a specialized technique.”

Species that pick insects off live leaves and nab them in the air – the most common foraging techniques – were relatively abundant in mixed flocks. These included ruby-crowned kinglets, blue-gray gnatcatchers and pine warblers. But birds that hunt exclusively in harder-to-find material tended to be represented by a single member per flock. These specialists called repeatedly, as though to warn others of their kind “Hands off! This is my flock,” Jones said.

The diversity of Florida’s flocks ranged from three to 12 species and four to 36 individuals per flock. The researchers identified 14 species as regular participants in mixed flocks, with 10 species appearing in more than 80% of mixed flocks.

“We didn’t know birds were spending 80-90% of their time in these flocks,” Jones said. “It’s clear that this behavior is really important to their ecology and may explain why there’s so much partitioning of resources within the flock. They’re spending almost all their waking hours together.” 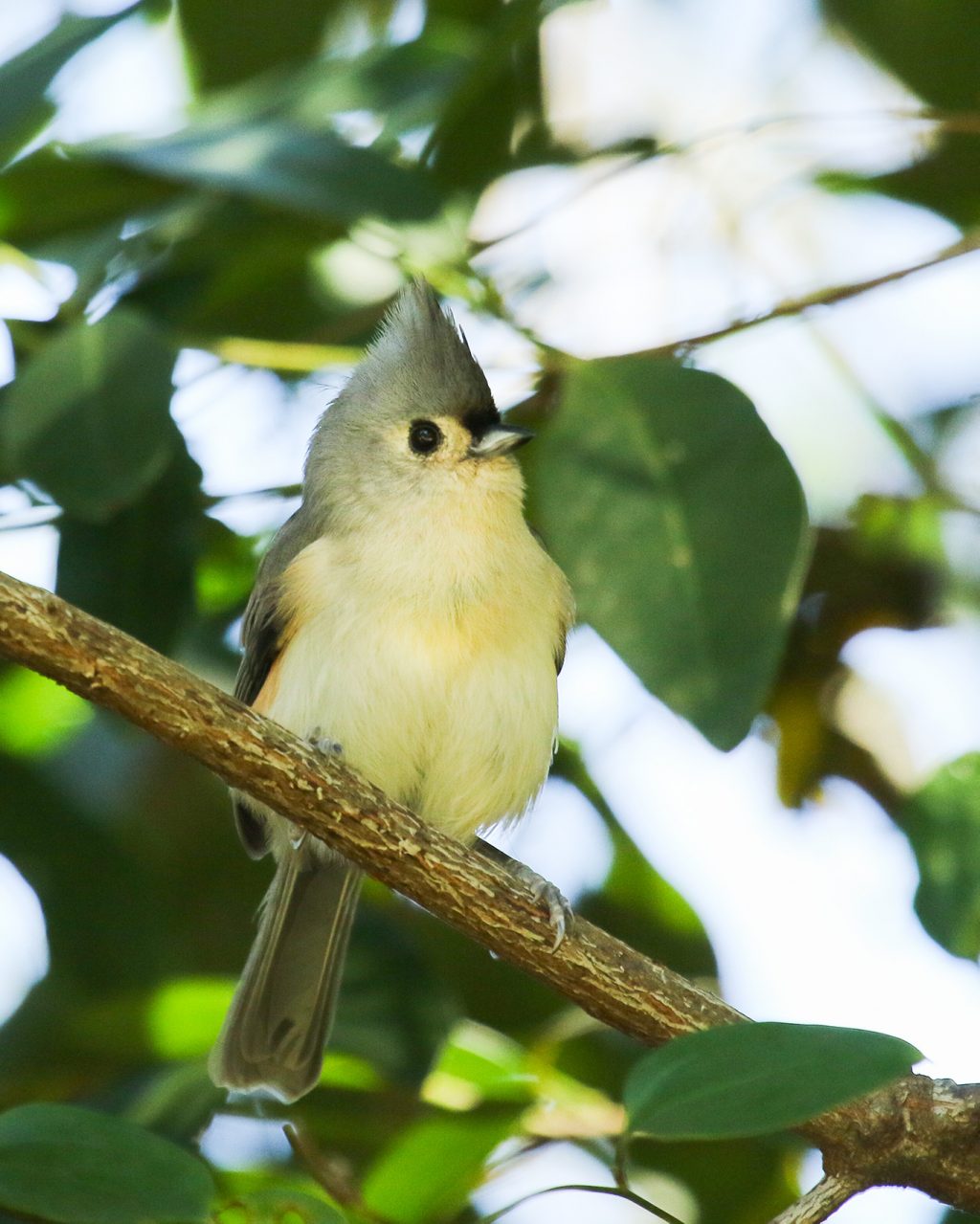 The “bossy” tufted titmouse, Baeolophus bicolor, leads flocks of mixed species. “They’re at the front of the flock, and where they go, the flock goes, too,” Jones said. Titmice provide an important service to flock members, sounding an alarm if they spot a predator. 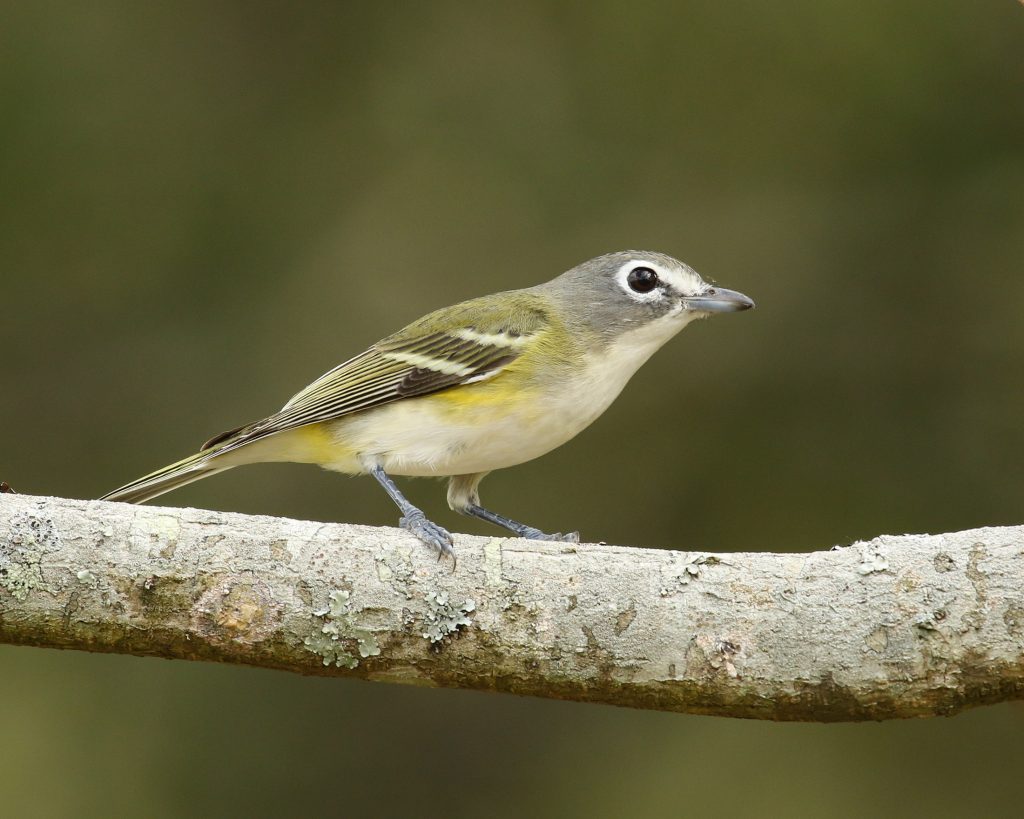 The blue-headed vireo, Vireo solitarius, tend to be represented by a single bird in mixed flocks. Jones and his co-authors hypothesize that specialist species may actively ward other members of their species away from a flock. 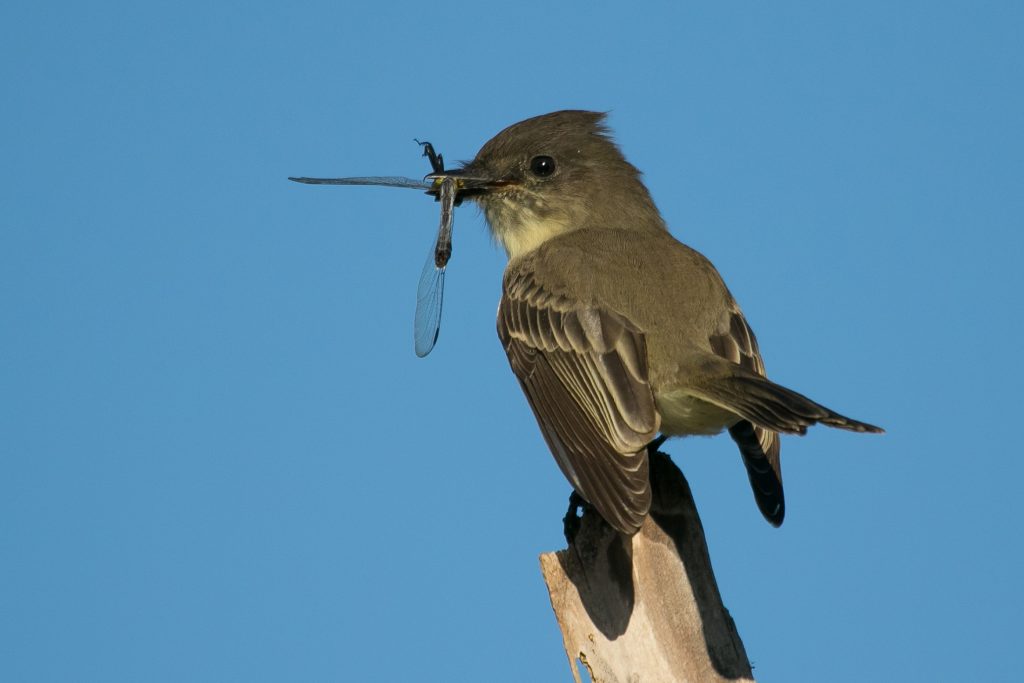 Some species, such as this eastern phoebe, Sayornis phoebe, prefer to hunt alone.

Mixed-species flocks only occur during winter, birds’ non-breeding season. Finding enough food in colder months is vital for birds, which must strike the right balance between putting on sufficient body fat to survive the night while staying lean enough to make a quick escape from a predator, Jones said.

Hunting insects as a group can be a life-saver. Flock members rely on sentinel species, which also direct the flock’s movements and pace, to sound the alarm if an owl or hawk swoops in. This allows the majority of birds in the flock to devote more attention to finding food. Traveling in numbers also lessens a bird’s chance of being the unlucky victim if a predator attacks.

“They’re always giving little contact calls to one another as an ‘all clear,’” he said. “If they stop, everybody else is on edge. When they see a predator, they give an alarm call, and everybody in the flock will freeze.”

But these sentinel species don’t appear to be actively recruiting flock members, Jones said: “They’re just going about their business, and everyone else joins them.”

As with any good K-pop band, group choreography is key. Jones and his co-author and birding partner Mitchell Walters, also a UF doctoral student in biology, noticed mixed flocks were dominated by small, swift birds. Larger insect-eating birds, such as woodpeckers, often couldn’t keep up, joining temporarily but dropping behind when the flock moved on.

Birds that foraged in the understory, such as thrushes, didn’t flock at all.

To piece together the story of Florida’s mixed flocks, Jones and Walters, both seasoned birders, spent many hours in Gainesville’s upland hammocks, developing cricks in their necks as they stared into the canopy through their binoculars.

“By the end of the study, we started to recognize how each of these species has its own way of moving and foraging, its own personality – something birders often talk about,” Jones said. “In many ways, this study was inspired by talking to local birdwatchers and just going birding. They’ll say things like ‘Of course you only get one vireo per flock.’ And the science agreed.”

The researchers published their findings in The Auk: Ornithological Advances.