by Halle Marchese, Mary-Lou Watkinson and Natalie van Hoose • November 20, 2019
Eating oysters only in “r” months dates back to at least 1599 when the adage appears in the English cookbook “Dyets Dry Dinner.” Some oysters can have a rank flavor in the summer, which is their mating season. Public domain image

Foodie tradition dictates only eating wild oysters in months with the letter “r” – from September to April – to avoid watery shellfish, or worse, a nasty bout of food poisoning. Now, a new study suggests people have been following this practice for at least 4,000 years.

An analysis of a large shell ring off Georgia’s coast revealed that the ancient inhabitants of St. Catherines Island limited their oyster harvest to the non-summer months.

How can scientists know when islanders were collecting oysters? By measuring parasitic snails.

Snails known as impressed odostomes, Boonea impressa, are common parasites of oysters, latching onto a shell and inserting a stylus to slurp the soft insides. Because the snail has a predictable 12-month life cycle, its length at death offers a reliable estimate of when the oyster host died, allowing Florida Museum of Natural History researchers Nicole Cannarozzi and Michal Kowalewski to use it as a tiny seasonal clock for when people collected and ate oysters in the past. 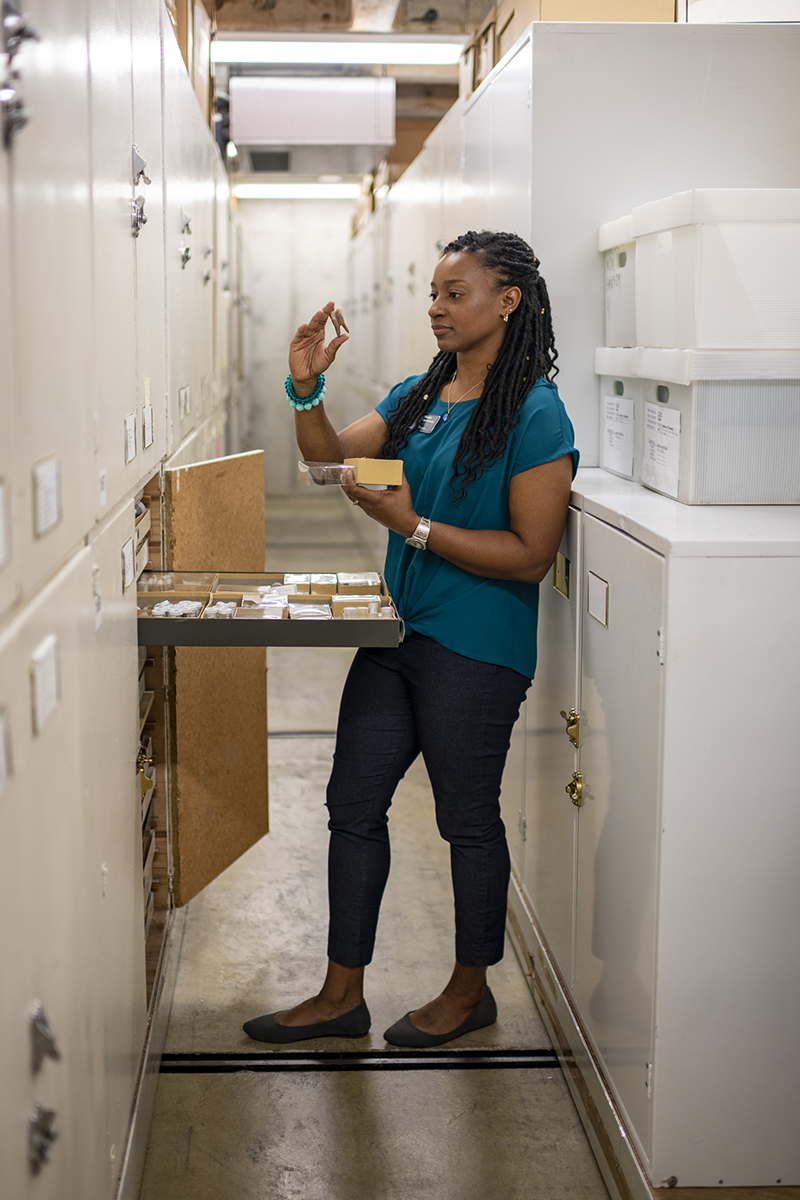 Nicole Cannarozzi studied the shell ring at St. Catherines Island to determine when humans were harvesting and depositing oysters in the area. “My favorite part of this project is that it’s interdisciplinary,” Cannarozzi said. “It gets across a few different fields.” 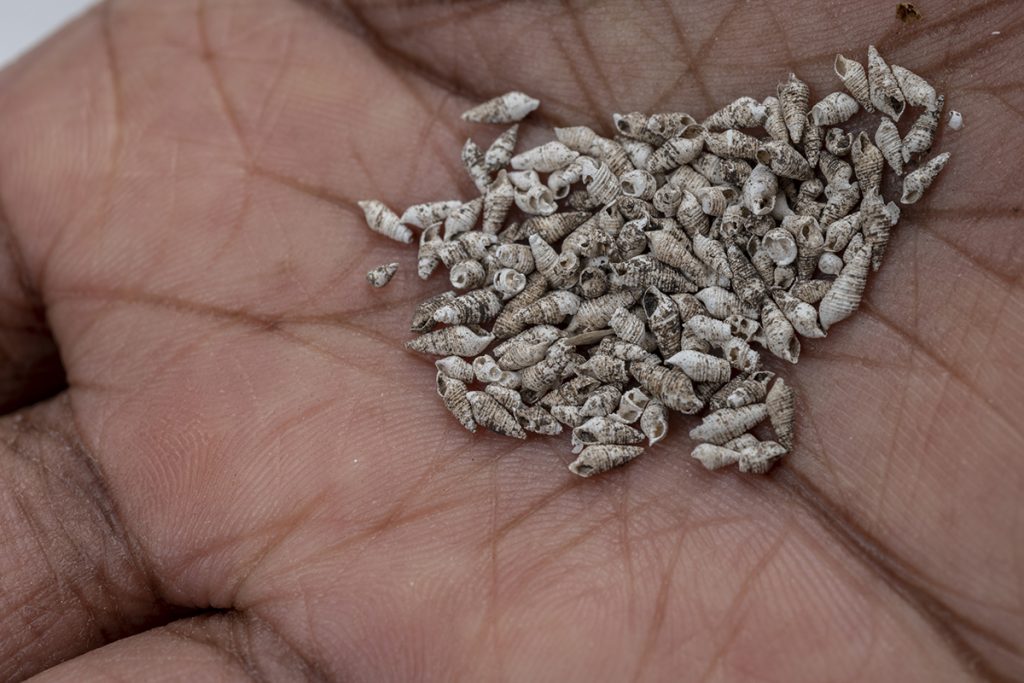 The impressed odostome, Boonea impressa, is a tiny marine snail that parasitizes oysters by perching atop and piercing their shells and sucking their insides. These snails can be found by the hundreds on individual oysters throughout the year. 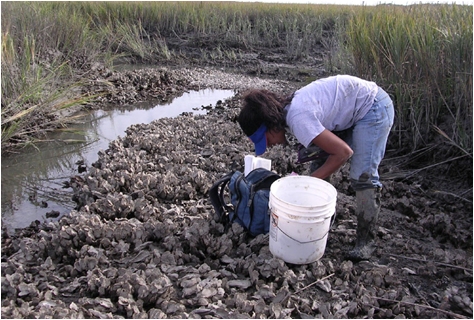 Out of the various shellfish remains found in the shell ring, Cannarozzi and Michal Kowalewski chose to work with the eastern oyster, Crassostrea virginica, because it’s “one of the most commonly identified species in these sites,” Cannarozzi said. 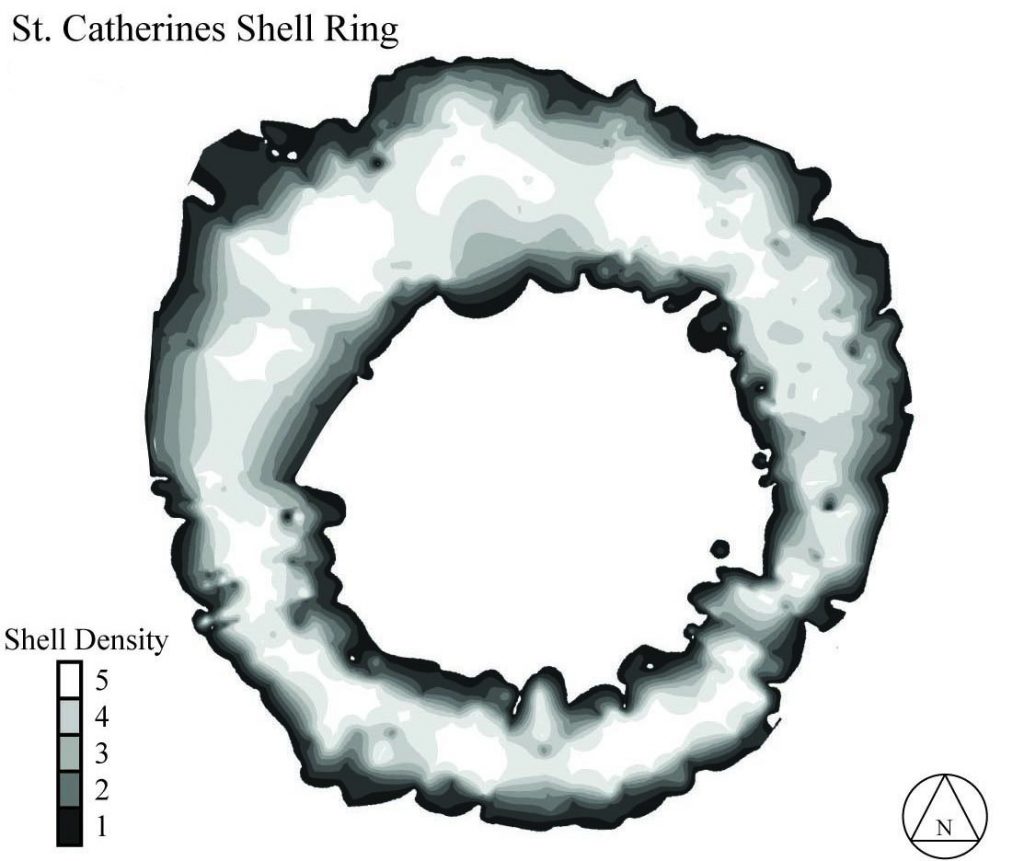 This model shows the outline of the St. Catherines shell ring, with darker areas indicating more density. St. Catherines’ shell ring is a 4,300-year-old and 230-foot-wide midden, meaning that it was used as a waste deposit. Cannarozzi and Kowalewski’s work focuses on gathering evidence on what times of year these deposits accumulated – or if they were used continuously – to track Late Archaic social patterns.

Stowaways on discarded oyster shells, the snails offer new insights into an old question about the shell rings that dot the coasts of Florida, Georgia, South Carolina and Mississippi.

“People have been debating the purpose of these shell rings for a very long time,” said Cannarozzi, the study’s lead author and Florida Museum environmental archaeology collection manager. “Were they everyday food waste heaps? Temporary communal feasting sites? Or perhaps a combination? Understanding the seasonality of the rings sheds new light on their function.”

Cannarozzi and Kowalewski, Thompson Chair of Invertebrate Paleontology, analyzed oysters and snails from a 230-foot-wide, 4,300-year-old shell ring on St. Catherines Island and compared them with live oysters and snails. They found that island inhabitants were primarily harvesting oysters during late fall, winter and spring, which also suggested the presence of people on the island tapered off during the summer.

The seasonality of the shell ring may be one of the earliest records of sustainable harvesting, Cannarozzi said. Oysters in the Southeast spawn from May to October, and avoiding oyster collection in the summer may help replenish their numbers.

“It’s important to look at how oysters have lived in their environment over time, especially because they are on the decline worldwide,” she said. “This type of data can give us good information about their ecology, how other organisms interact with them, the health of oyster populations and, on a grander scale, the health of coastal ecosystems.”

Kowalewski said the method could be applied to other marine invertebrate studies if the “timepiece” organism’s life cycle meets several key requirements.

“If you have species with a lifespan of one year or less, consistent growth patterns and predictable spawning behavior, you could potentially use them as clocks as well,” he said. “We might be able to use this type of strategy to reconstruct population dynamics or the natural history of various species, especially those that are extinct.”

Cannarozzi and Kowalewski emphasized the importance of interdisciplinary collaboration in addressing longstanding research questions in new ways. Their project combined paleontology, the study of fossils and other biological remains, with archaeology, which emphasizes human history. Cannarozzi’s specialization – environmental archaeology – also explores the close connections between humans and their natural resources.

“People have affected the distributions, life cycles and numbers of organisms over time,” Cannarozzi said. “Understanding how people in the past interacted with and influenced their environment can inform our conservation efforts today.”

The researchers published their findings in PLOS ONE.