Graslie gives the public behind-the-scenes access to natural history collections via her educational YouTube channel “The Brain Scoop,” uncovering how museum specimens help us better understand and protect the life around us.

In recognition of her outreach efforts, scientists have named a new species of butterfly in her honor: Wahydra graslieae.

“We thought that after spending years explaining why specimens are important and bringing natural history collections to the attention of the public, Emily was definitely someone who should have a bug named after her,” said Andy Warren, senior collections manager of the Florida Museum of Natural History’s McGuire Center for Lepidoptera and Biodiversity. “She was really overdue for this kind of recognition.” 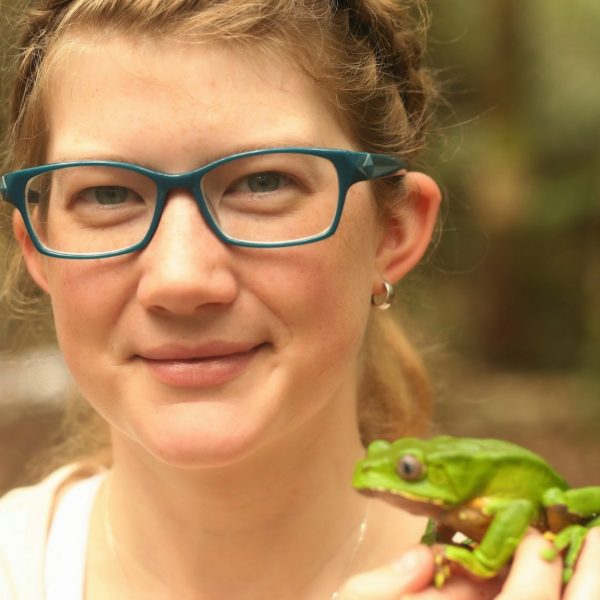 Emily Graslie, chief curiosity correspondent for the Field Museum, said she was “absolutely honored” to have the butterfly species named after her. 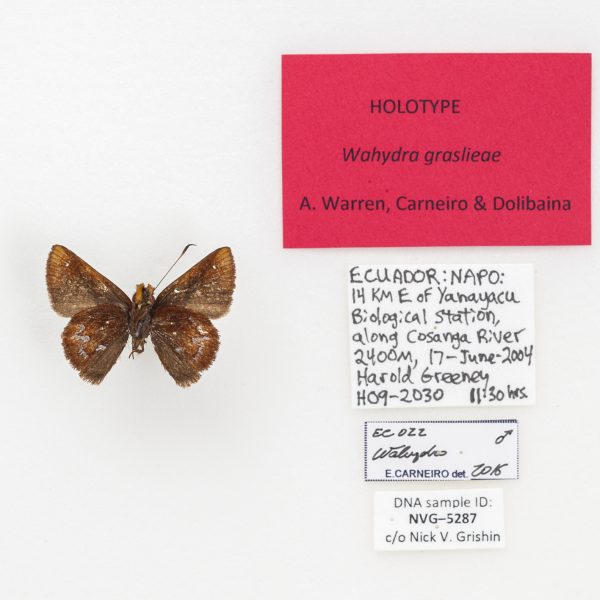 This is the only known specimen of Wahydra graslieae. The red label marks the butterfly as a holotype, the representative specimen from which a species is described.

Wahydra graslieae is a dark rust-colored skipper with jagged bands of silver scales on the underside of its hindwings. The species is known from a single specimen collected in the Ecuadorian Andes in 2004 by Warren’s collaborator Harold Greeney.

The butterfly, about the size of a postage stamp, was stowed away in a Tupperware box of specimens waiting for identification until 2016 when Warren and visiting colleagues Eduardo Carneiro and Diego Dolibaina from the Federal University of Paraná in Brazil decided to tackle the backlog.

“We were an assembly line,” Warren recalled. “I was photographing the specimens, and they were dissecting and illustrating the genitalia,” one of the best means of narrowing butterflies to genus or species.

To the untrained eye, Wahydra graslieae may not be the showiest butterfly, but when Warren – a skipper expert – saw it, he immediately thought, “Wow, that’s bizarre.”

“We knew it was a new species, but we just had no idea even what genus it was. Nothing else looks like it,” he said. “Once Eduardo made the call that it was a Wahydra, it clicked. It was really a group discovery.”

Little is known about the genus Wahydra, a group of small Andean skippers found from Venezuela to Argentina with most species in Ecuador. Wahydra are rare in collections, primarily because they’re tough to find in the wild, living at high elevations where poor weather conditions predominate, Warren said.

In this obscure genus, Wahydra graslieae is distinct, much darker than other described Wahydra species and with pointer forewings and metallic silver scales that have previously only been found in very distantly related skippers.

“Wahydra graslieae seems to be this whole new clade,” Warren said. “It’s expanding our concept of what Wahydra diversity looks like.” 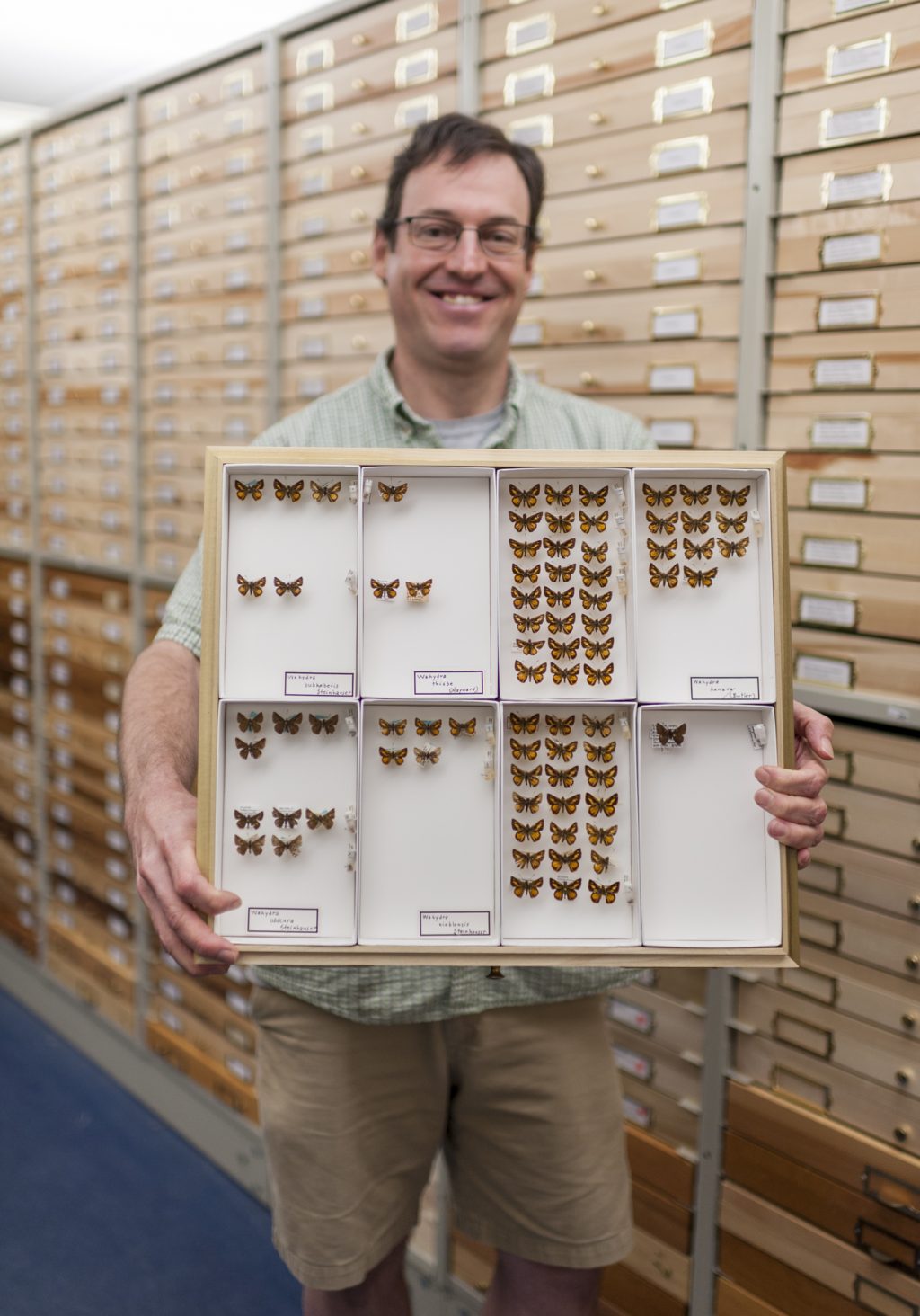 Andrew Warren holds a box containing all of the McGuire Center’s Wahydra specimens. Wahydra graslieae, in the bottom right corner, is distinctly darker than other Wahydra. 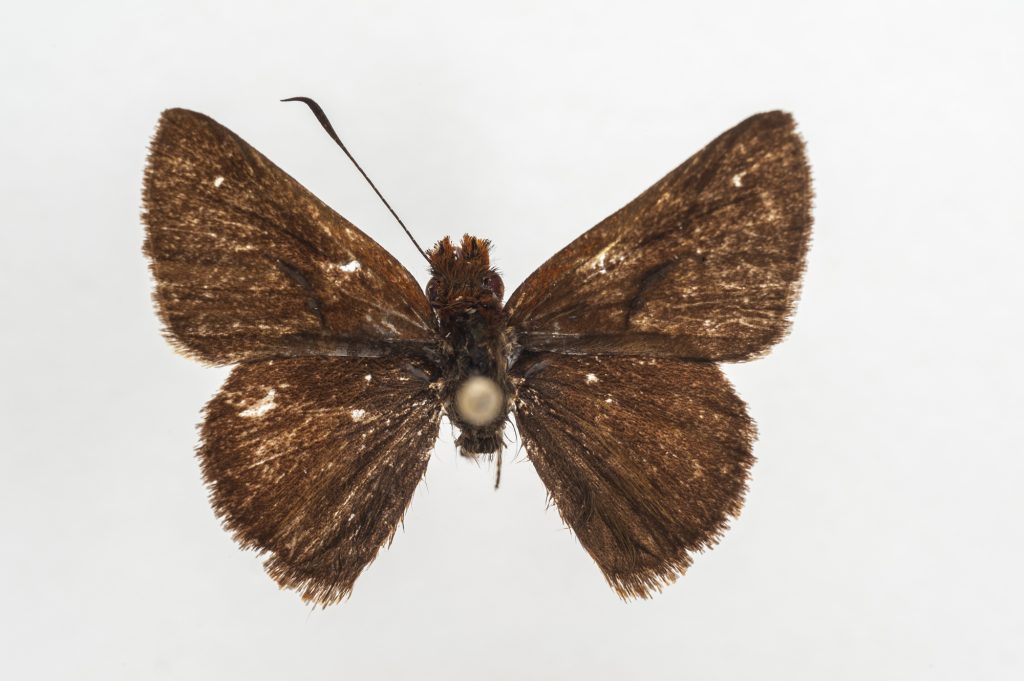 Wahydra graslieae looks so different from other Wahydra species that Warren, a skipper expert, was initially stumped as to the specimen’s genus. 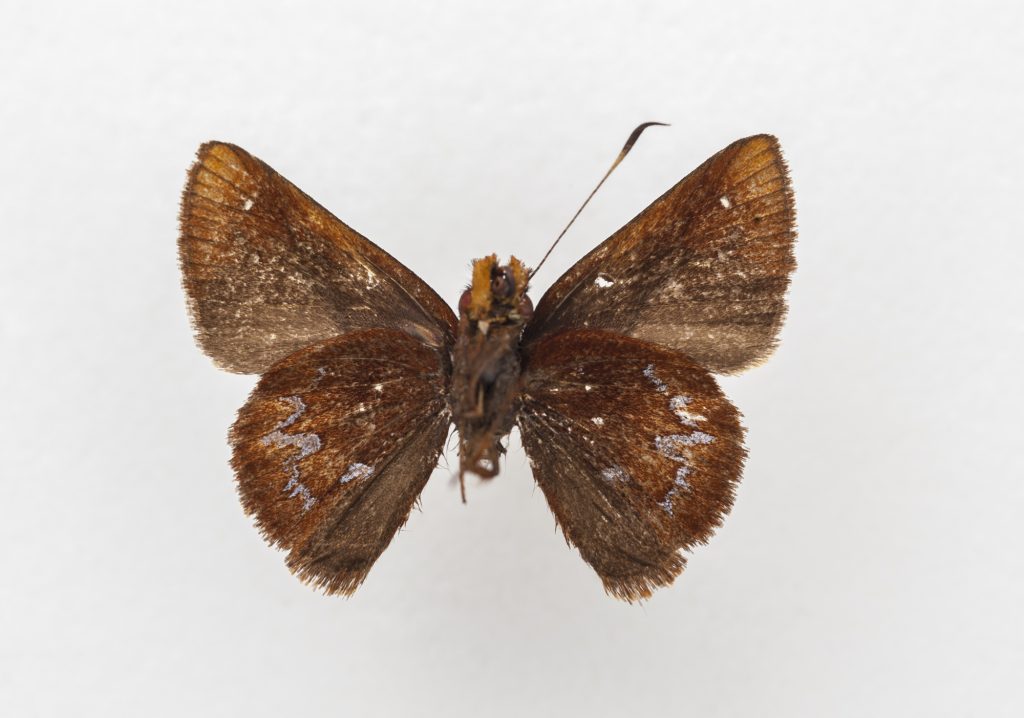 Jagged bands of metallic silver scales mark the underside of the butterfly’s hindwings, a feature only previously seen in very distantly related skippers.

In the last few years, five new species of Wahydra have been described, but scientists have likely just started to scratch the surface of the genus’s diversity, he said.

Warren said of the 15 identified Wahydra species, scientists only know the host plant for a few, which all eat bamboo. He said that every 1,500-foot increase in elevation in the Andes results in a complete turnover in bamboo species and the butterflies that feed on them.

“That would explain the rarity of Wahydra and the patchiness of their distribution,” he said.

But fieldwork is not the only way to find new species. Museum collections themselves are also good places to look.

“I guarantee that the compactors in the McGuire Center are full of undescribed species,” he said. “That’s part of the value of museums. Without these collections, there’s no way to document biodiversity on Earth. It’s hard to know where to put conservation resources unless you know what’s really out there.”

Wahydra graslieae could likely be rediscovered, “with a little bit of luck and effort,” Warren said.

“Someone might look at Wahydra graslieae and be completely underwhelmed by what they see. After all, it’s tiny and lacks the explosively dynamic colorations and patterns that come to mind when you think of a monarch butterfly or an atlas moth – two animals, by the way, that already have names with gravity. Monarch. Atlas. But this is not them,” Graslie said.

“This is Wahydra graslieae, a little-known creature that comes to us with more questions than answers. In that way I feel a sense of kindredness with this animal and am absolutely honored that Dr. Warren and his team saw fit to associate such a curious skipper with my name. I can’t wait for further research to reveal more information about them.”

The description of the new species was published today in Zootaxa.

Catch a YouTube conversation between Warren and Graslie about the butterfly on “The Brain Scoop” here: