by Jerald Pinson • August 9, 2021
Birds have larger or smaller eyes depending on the environment they live in and the types of food they eat. Loggerhead shrikes, Lanius ludovicianus, for example, use their large eyes to hunt insects and rodents. Photo courtesy of Mitch Walters

new study shows the eye size of birds can reveal broad patterns of their biology and behavior, including where they live, what they eat and how they hunt, providing a potential roadmap for future conservation efforts.

Birds have some of the largest eyes relative to their bodies of all vertebrate land animals, second only to frogs. With a limited range of taste and smell, birds primarily rely on vision to navigate, find food and avoid predators. Yet surprisingly little is known about how eye size in birds influences their behavior compared with other traits, such as beak shape and body size, which scientists have meticulously studied since Charles Darwin’s classic work on finches.

“I was really shocked to find out while doing literature searches that there was no definitive publication on how eye size in birds relates to their environment,” said Ian Ausprey, a recent doctoral graduate of the Florida Museum of Natural History’s Ordway Lab of Ecosystem Conservation.

Previous studies on bird eyes have been limited in scope, typically including only a few dozen species or specific regions. This gap in scientific knowledge was all the more glaring given that a graduate student measured the eyes of more than 4,000 species of birds in museum collections in the late 1970s, creating the largest dataset of its kind.

Ausprey relied on this resource to analyze eye size for 2,777 species – about one-third of the world’s bird diversity – revealing that this single trait more powerfully predicts where birds live and how they behave than better-studied characteristics such as size, anatomy and movement.

Ausprey had the idea for the study while conducting fieldwork with colleagues in the Andean forests of Peru. Over the course of five years, the researchers measured the eyes of Peruvian birds and attached small light sensors to more than a dozen species of tanagers, finches, wrens and woodpeckers to determine how these birds were coping with increased amounts of forest fragmentation due to agriculture.

Their results were troubling: Birds with large eyes avoided agricultural fields, keeping to diminishing forest habitats. But the researchers could also use eye size to predict where these birds mated and laid eggs and what they were eating, valuable information for future conservation efforts.

Ausprey wanted to know whether this pattern held true for all birds, not just those in Peru. But with over 10,000 species spread out across all seven continents, answering a question as broad as how eye size influences bird behavior would have taken years.

Fortunately, the data Ausprey needed had already been collected in the form of a dissertation, a nearly 2,000-page tome completed by Stanley Ritland during his time as a doctoral student at the University of Chicago.

“He spent his time traveling around museums, extracting eyes out of specimens preserved in alcohol and then measuring them,” Ausprey said. “He did it for several thousand species of birds, as well as mammals and reptiles.”

Ritland left academia upon graduating, however, and never published his data in a scientific journal. Researchers have used small portions of the massive dataset, initially relegated to the stacks of the University of Chicago library, to answer small-scale questions, but comprehensive analyses have so far been lacking.

Although the data was available, the time-consuming task of digitizing it still remained. Ausprey hired two undergraduate students, Savannah Montgomery and Kristie Perez, who spent five months transcribing Ritland’s measurements into spreadsheets so they could be analyzed and shared more broadly with the scientific community.

Because eye size tends to increase with body size, Ausprey standardized all the measurements for each species by mass and intentionally omitted birds that operate at optical extremes, such as far-sighted raptors and nocturnal owls. Scientists already know these species have unusually large eyes.

Instead, he focused on land-dwelling birds that hunt for food close to the ground and are most active during daylight hours.

Stark patterns began to take shape as eye size was compared with a host of behavioral traits.

Birds with larger eyes live closer to the equator, where the planet’s belt of rainforests create dark understory habitats. Regardless of latitude, birds that hunt or forage closest to the forest floor have large eyes to take in as much light as possible, while those that spend more time in the sky had correspondingly smaller eyes to reduce glare. 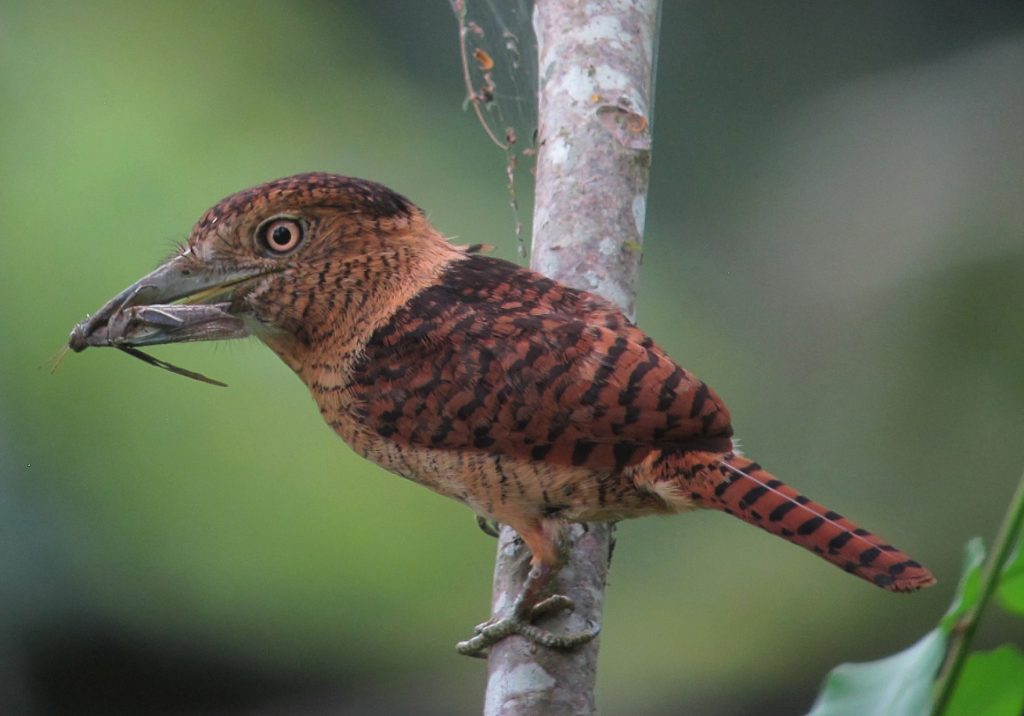 This barred puffbird, Nystalus radiatus, has large eyes that help it navigate tropical rainforests in Central and South America where it primarily hunts insects and small lizards. 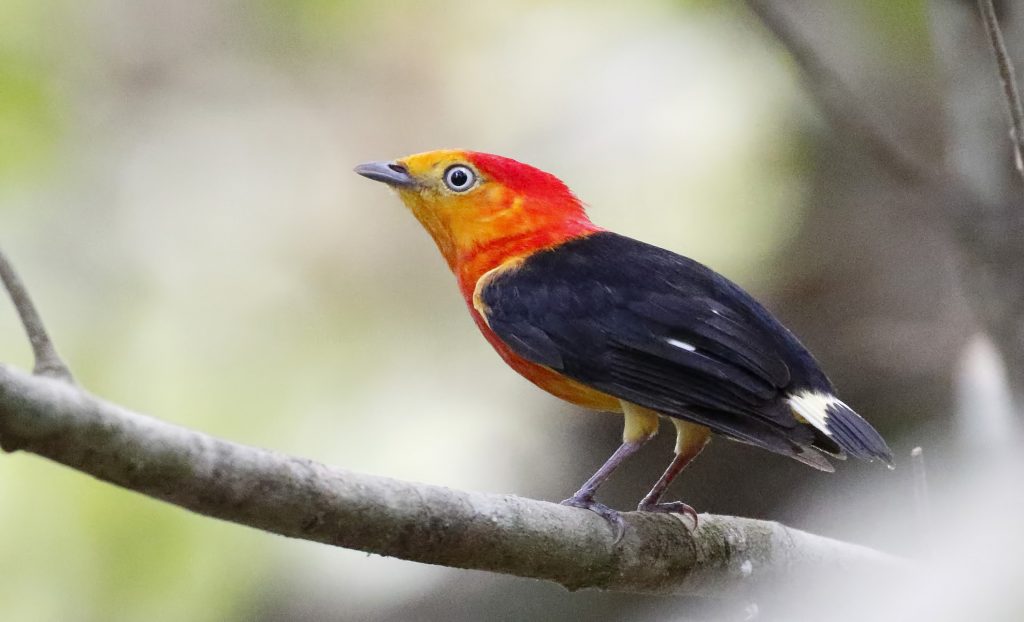 Band-tailed manakins, Pipra fasciicauda, can be found throughout much of the Amazon Basin. Their large eyes help them peer through the gloom of the rainforest’s understory. 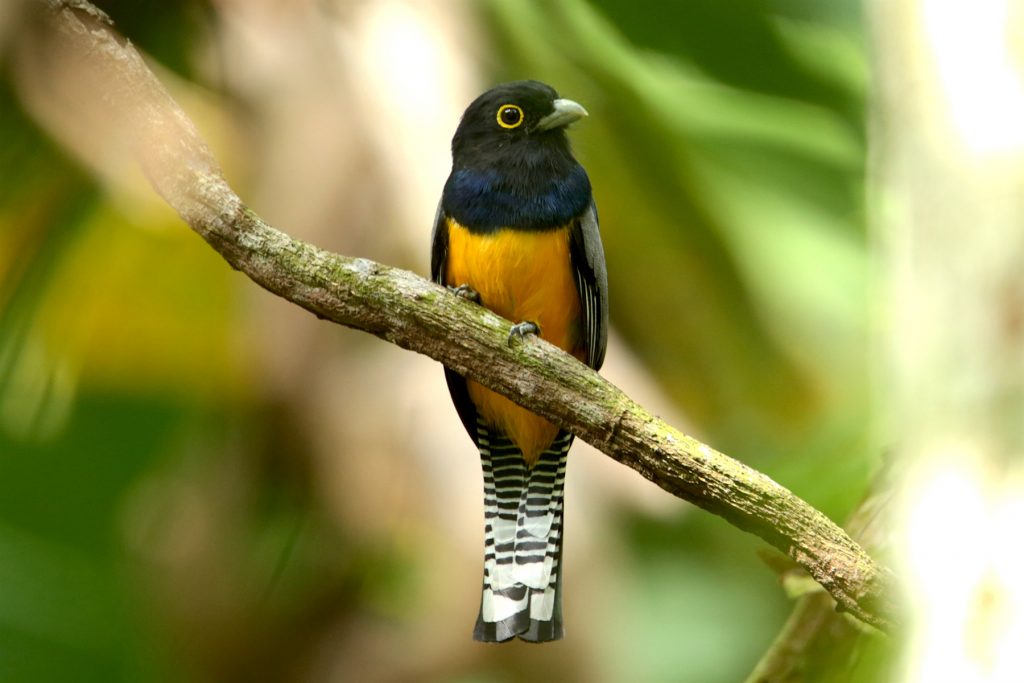 This gartered trogon, Trogon caligatus, primarily lives in Central America where it prefers shaded forest habitat. Gartered trogons have large eyes and have a varied diet of fruit and insects.

“Bright lights can cause something called disability glare,” Ausprey said. “When you shine a light on birds, they change the way they forage. They also respond differently to vocalizations of experimental predators.”

Scientists worry that such behavioral changes may negatively affect avian understory specialists, many of which have already been displaced because of deforestation.

“Understory tropical birds may be especially sensitive to fragmentation because they are adapted to dark forested environments and are unable to cope with rapid changes in brightness associated with forest edges and human-modified habitats,” Ausprey said.

Eye size is also strongly correlated with diet. Larger eyes not only absorb more light, but they can also confer increased focal length and resolution, the equivalent of upgrading your camera with a longer lens.

Birds that eat insects have larger eyes, which are better suited for spotting prey at long distances, regardless of whether they lived in the forest understory or open habitats. Birds with the smallest eyes relative to body size were often nectar feeders, hinting that they may rely on color more than shape when looking for food.

Ausprey also analyzed how eyes have changed throughout the birds’ evolution, finding that once eyes became larger in a particular group, they stayed that way. This meant that closely related groups, such as the hummingbird and swift families, could have eyes of vastly different sizes. 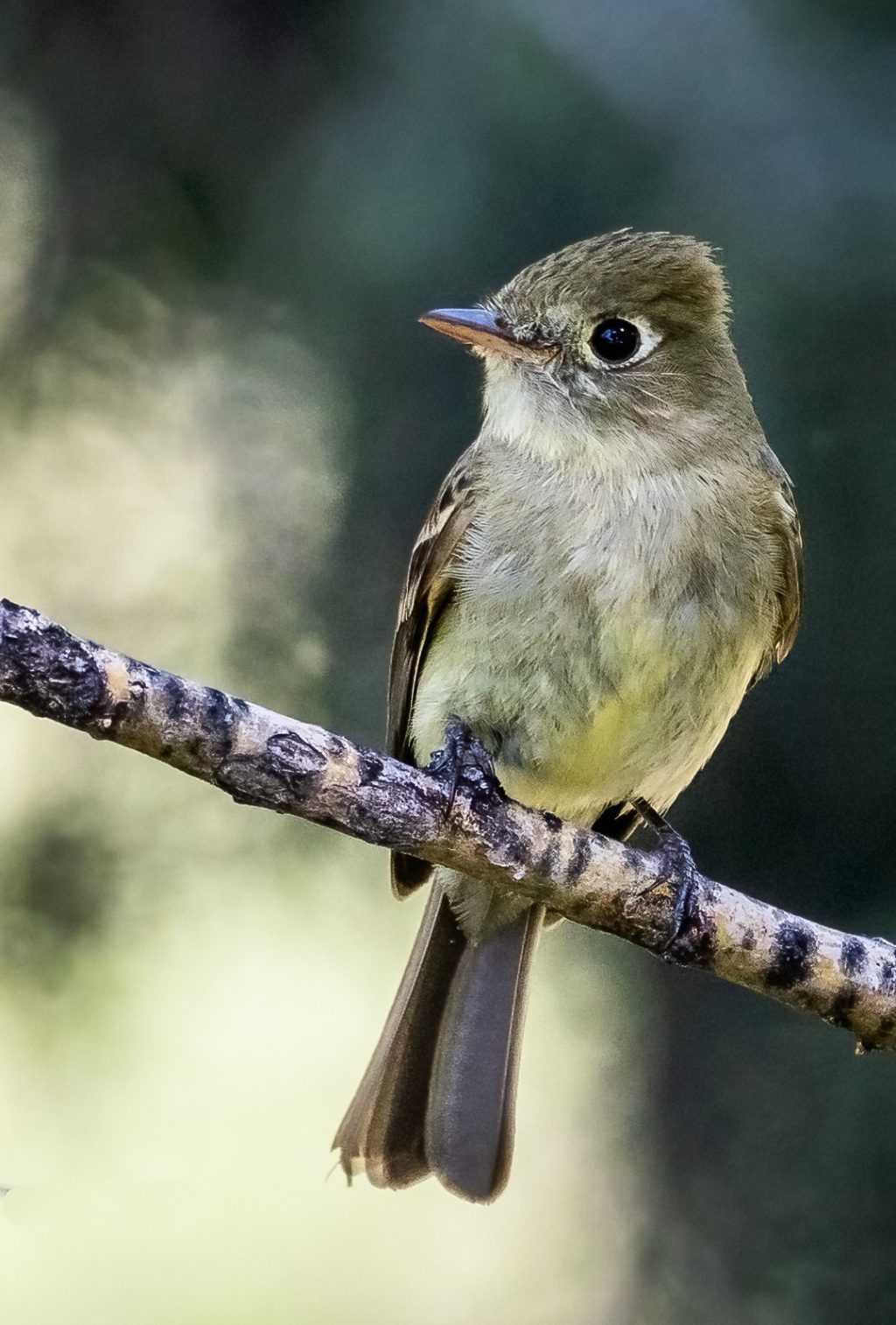 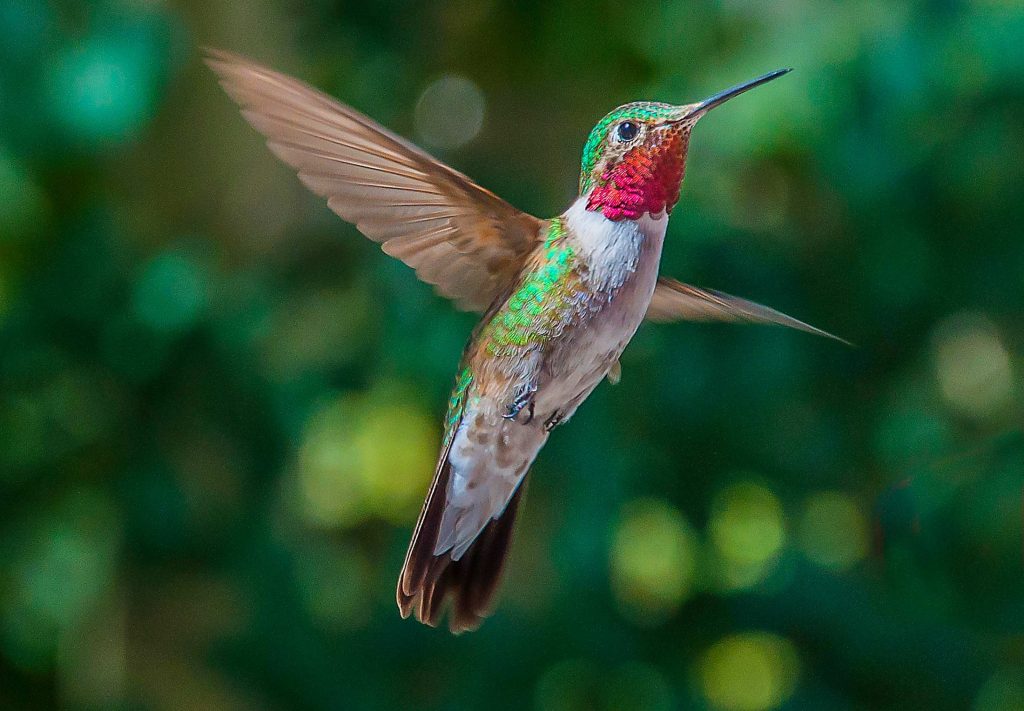 Hummingbirds, which are exclusively nectar feeders, generally have small eyes compared to the size of their bodies. It’s likely they rely on the colorful cues of flowers to locate food.

Within a family, however, size didn’t change much among species. Flycatchers, for example, spend a lot of time sallying out and catching prey, which requires long-distance, binocular vision, Ausprey said.

“And it turns out, flycatchers tend to have larger eyes, as you’d expect. All the finches and tanagers and such that eat fruits and seeds tend to have very small eyes.”

To Ausprey, the data collected by Ritland decades ago offer an unparalleled glimpse into bird diversity and behavior, which may help conserve species for the future.

“Nearly half a century of time has passed, and yet the same datasets are relevant,” Ausprey said.

Ritland relied entirely on alcohol-preserved museum collections, meaning the same specimens he measured are still accessible to scientists stitching together patterns in the natural world.

Some of the birds he encountered during his museum visits were already of considerable antiquity by the time he began taking his measurements, including two birds collected during Captain Cook’s first voyage around the world.

“Museum collections are invaluable, indispensable and essentially irreplaceable,” Ritland said in an email.

Ausprey, who knew firsthand the difficulty of collecting eye-size data in the Andean cloud forests of Peru, gained a newfound respect for natural history collections while using Ritland’s work.

“As an ecologist, it’s become extremely apparent that collections are invaluable for providing data on traits that we really can’t collect in the field easily.”

The research was published in the Proceedings of the Royal Society B.

Funding for the research was provided by the Katharine Ordway Chair in Ecosystem Conservation at the Florida Museum of Natural History.

Florida Museum scientists zoom in on DNA to save thorny skates