The Florida Museum of Natural History’s Division of Invertebrate Zoology will incorporate new collections with the help of a National Science Foundation grant.

The division’s collection has more than doubled in size in the past 15 years, and the nearly $402,000 award will create space for this expansion and several recently acquired additions: the Harry G. Lee mollusk collection, the National Oceanic and Atmospheric Administration’s National Coral Reef Monitoring Program collection and the Maturo and McKinney Bryozoa collections of microscopic filter feeders.

These collections have historical significance for invertebrate biology in a rapidly changing marine environment, said Gustav Paulay, Florida Museum curator of invertebrate zoology. They will add tens of thousands of mollusks, reef specimens and Bryozoa or “moss animals” – colonies of lacy, interconnected coral polyps – to the invertebrate collection of an estimated 3.5 to 4 million specimens. 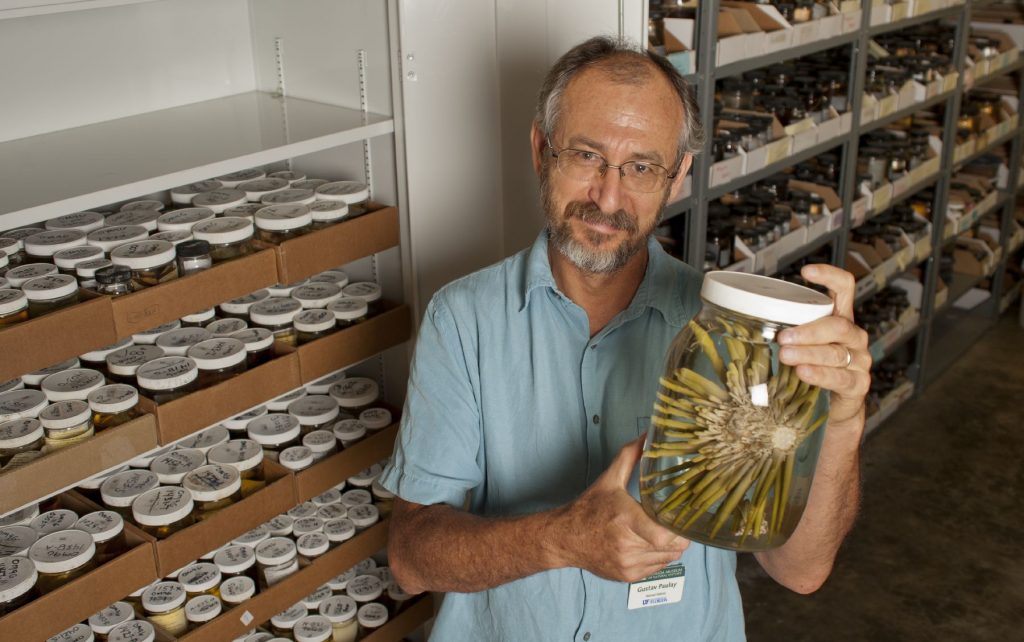 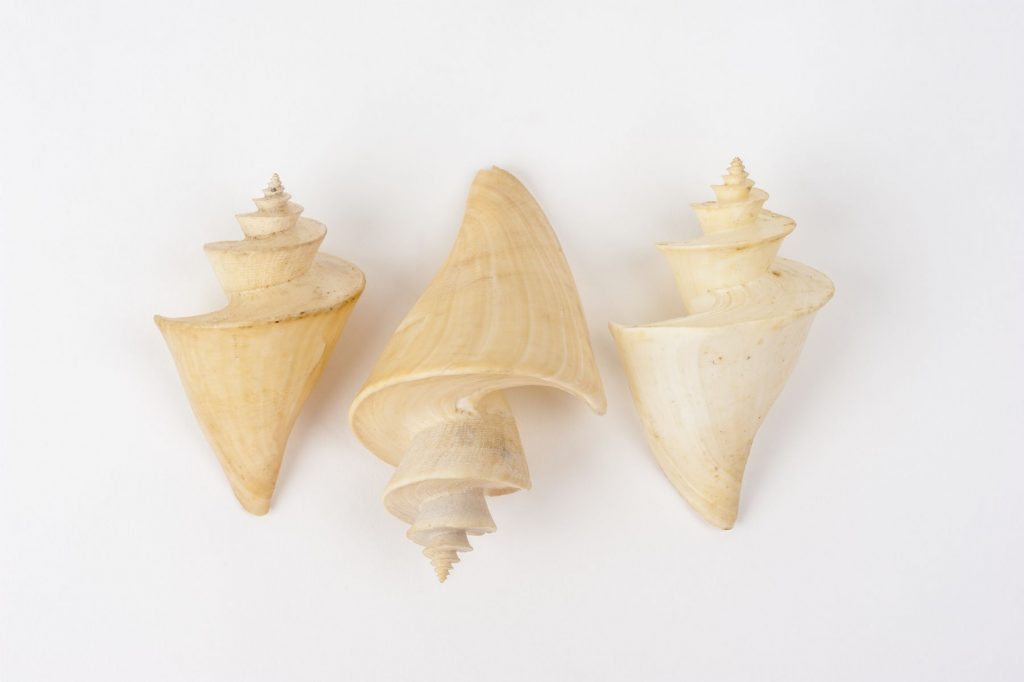 The Japanese wonder shell, Thatcheria mirabilis, is a sea snail found in the Western Pacific. The shells above are from the Harry Lee Collection. 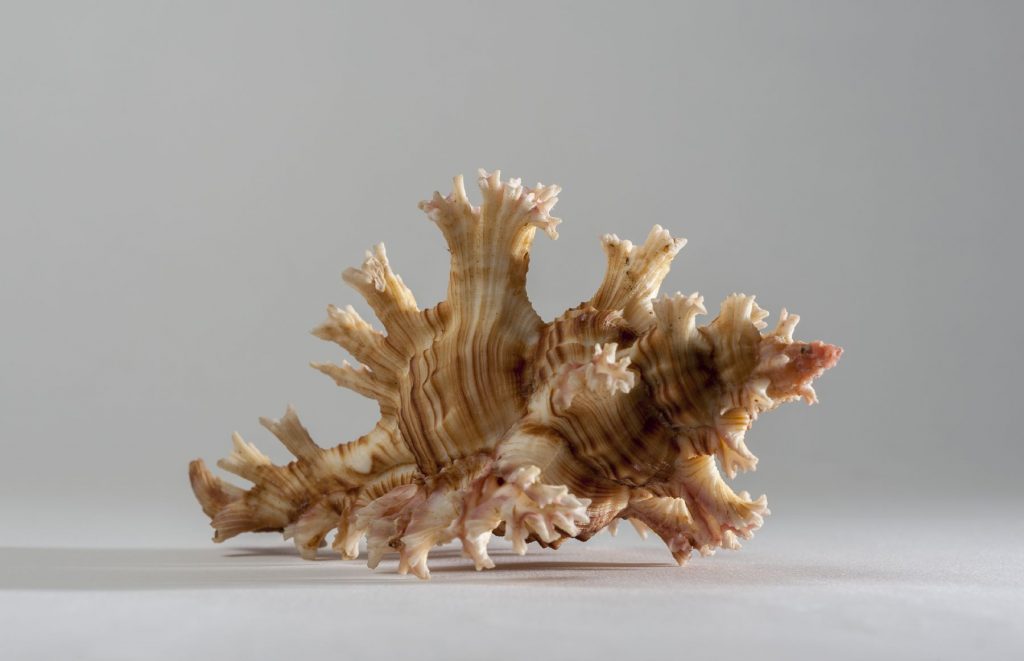 The rose-branch murex, Chicoreus palmarosae, is a predatory sea snail found in the Pacific and Indian Oceans. This specimen is part of the Harry Lee Collection.

Invertebrates lack a backbone and range from sponges and corals to giant squids and lobsters. Over 95 percent of all Earth’s described animal species, including insects, are invertebrates.

Still, scientists only know a small fraction of the species that live in the ocean, Paulay said.

“We know amazingly little about marine life,” he said. “The amount of novelty in these collections is huge, and now we can have more of it available for people to study.”

The grant will also support the development of an undergraduate apprenticeship to provide students more opportunities to practice their skills in the field and pursue their own research projects using the collection’s specimens. Undergraduates will participate in a field workshop to work with animals in their habitats while learning to curate collections and develop specimen-focused research. 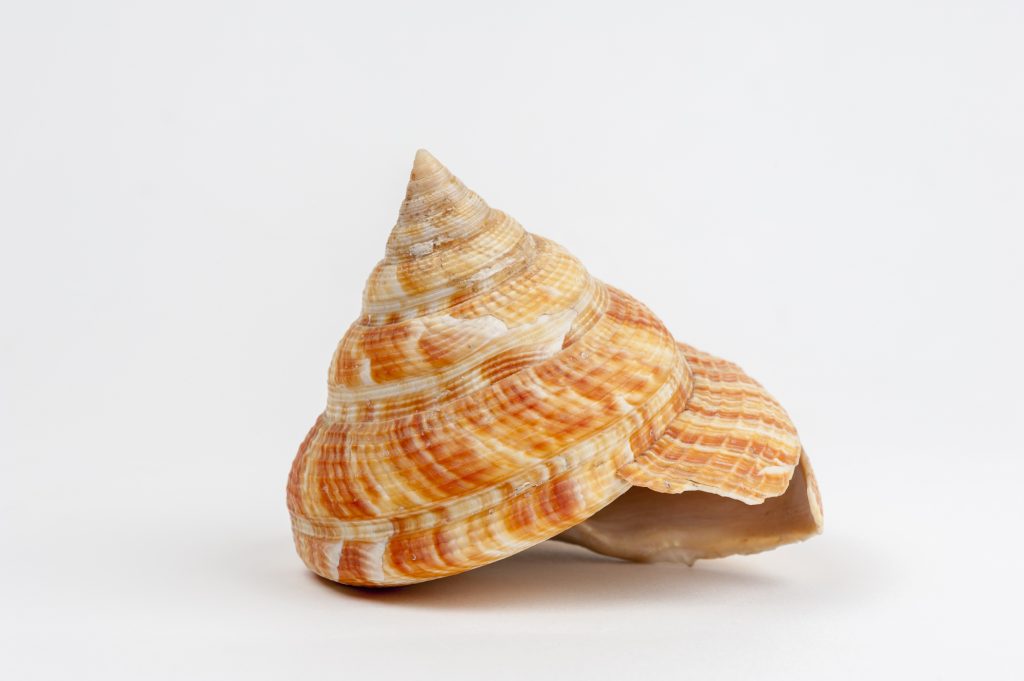 The Harry Lee Collection is estimated to have nearly 1 million shells. Beyrich’s slit shell, or Mikadotrochus beyrichii, is pictured above. 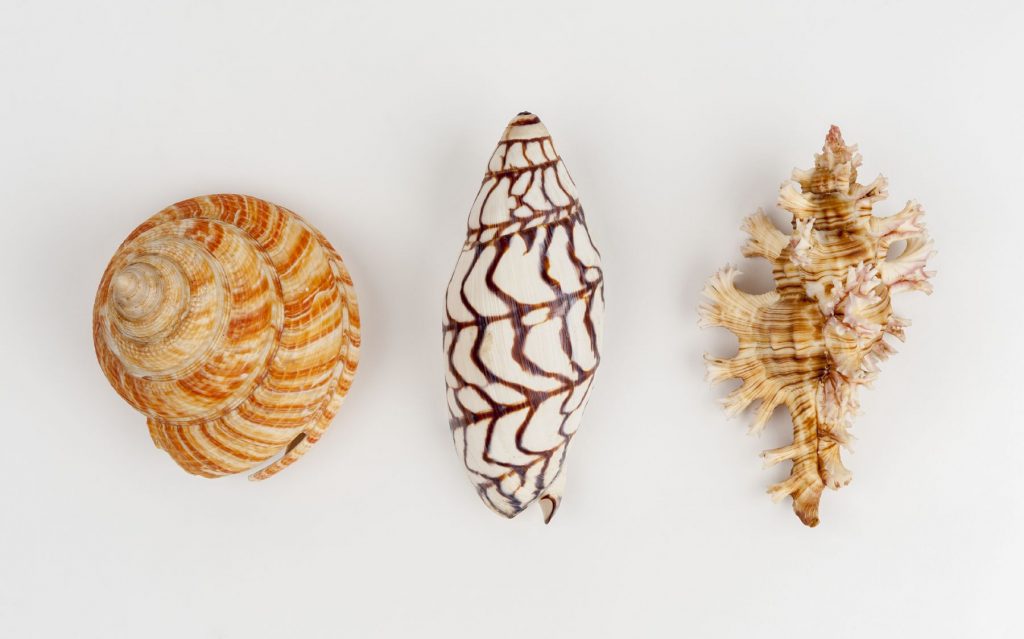 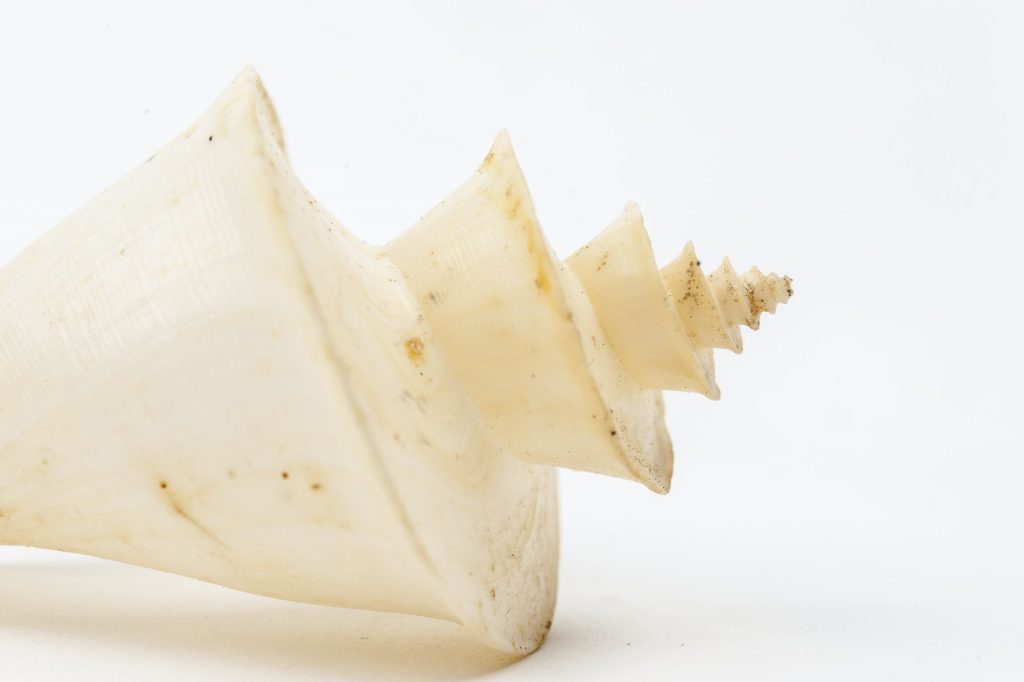 The Japanese wonder shell, Thatcheria mirabilis, was once quite expensive due to its rarity, but is now considered a common species in the Western Pacific.

“Students are a major part of the workforce for helping curate these collections,” Paulay said. “We will have a field workshop where students can work with animals in their habitat and learn how marine life is documented.”

Shell collectors have also made invaluable contributions to the collection, Paulay said. The Harry G. Lee mollusk collection is one of the world’s premiere private shell collections, with 12,000 species represented and identified and nearly 1 million shells, which Lee is transferring to the museum in batches.

“Lee has been collecting since childhood,” Paulay said. “He’s a fountain of knowledge about molluscan biodiversity.”

These tiny animals are frequently overlooked in the marine environment, Paulay said. Only about 6,000 species of bryozoans are known, but there are likely several times as many that are undiscovered.

“Human effort is often the limiting factor in documenting the natural world. The importance of amateur collectors is huge, as they greatly expand our capacity to learn about what’s living on the planet,” he said. “For example, we know a ton about birds because there are so many birdwatchers. We need more people looking at the broad diversity of organisms, including smaller and neglected groups. Many species may not survive our impact on nature, and future generations will not have the chance to learn anything about them unless we record them today.” 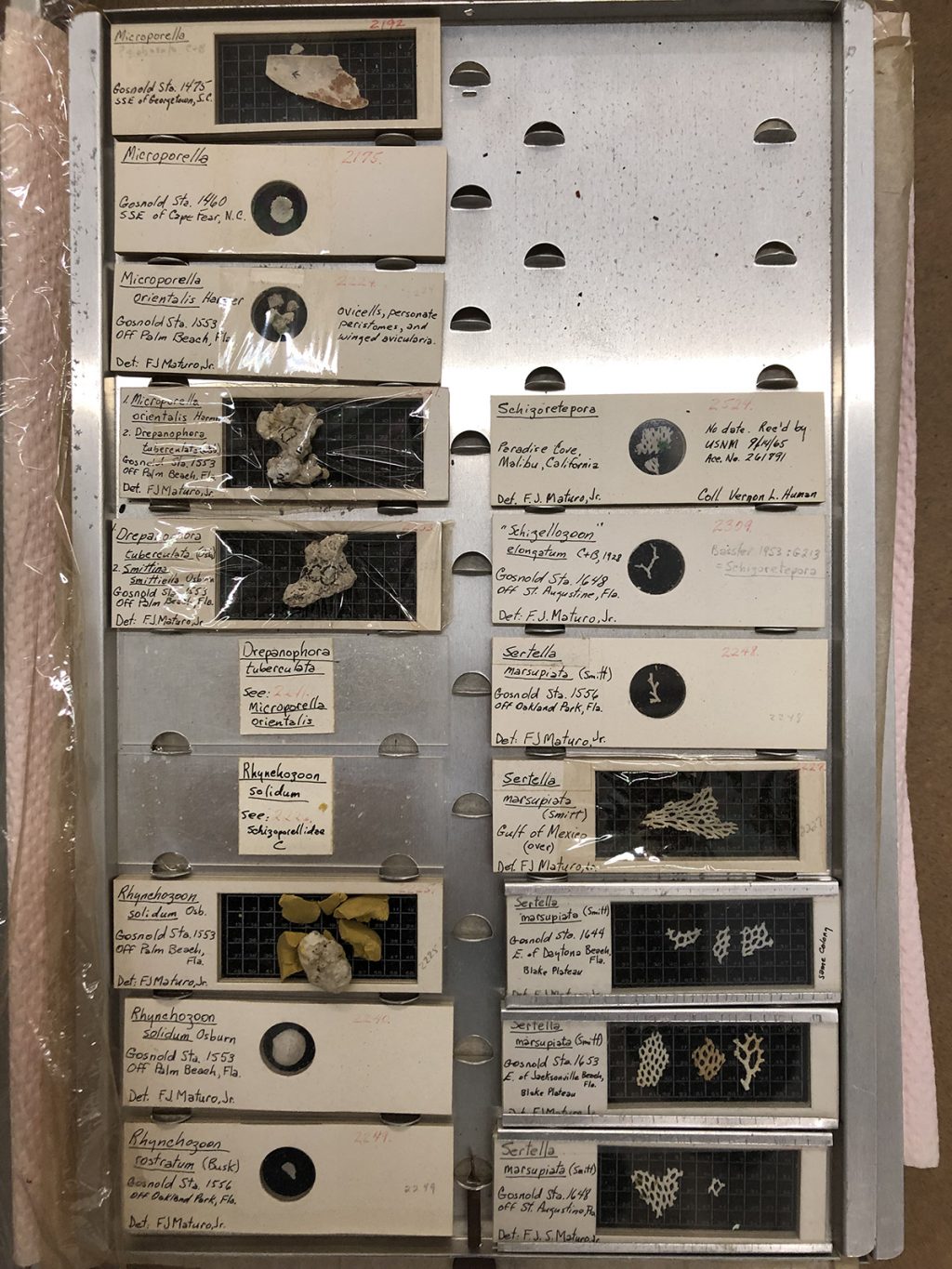 The specimens in this drawer are bryozoans, tiny, interlaced coral polyps. Sometimes called “moss animals,” they are related to jellyfish and anemones. 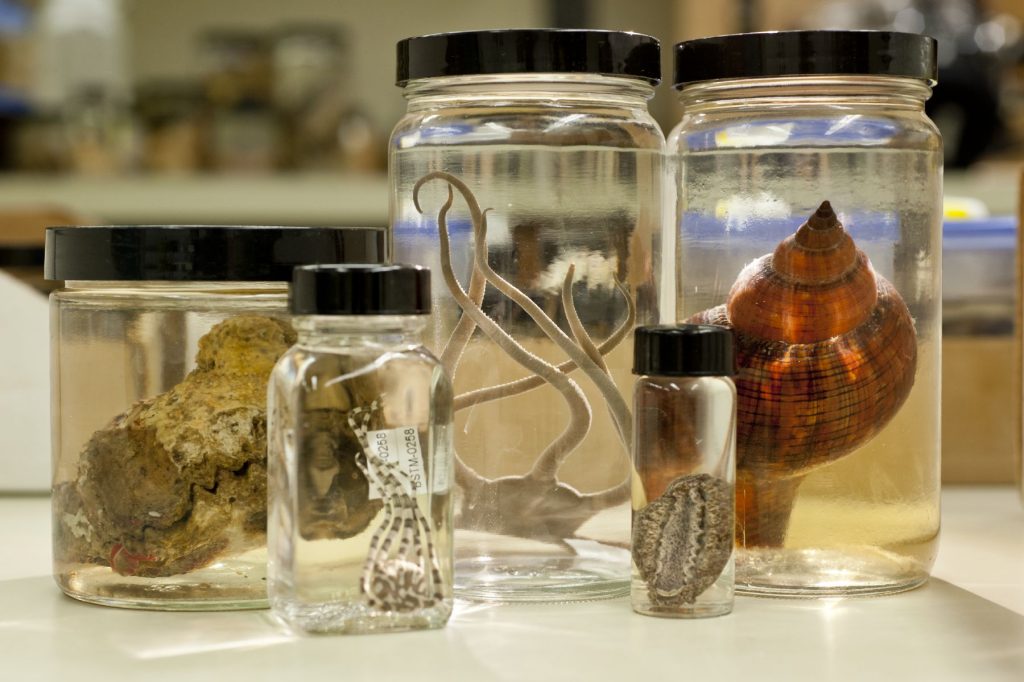 The Florida Museum invertebrate zoology collection has an estimated 3.5 to 4 million specimens. 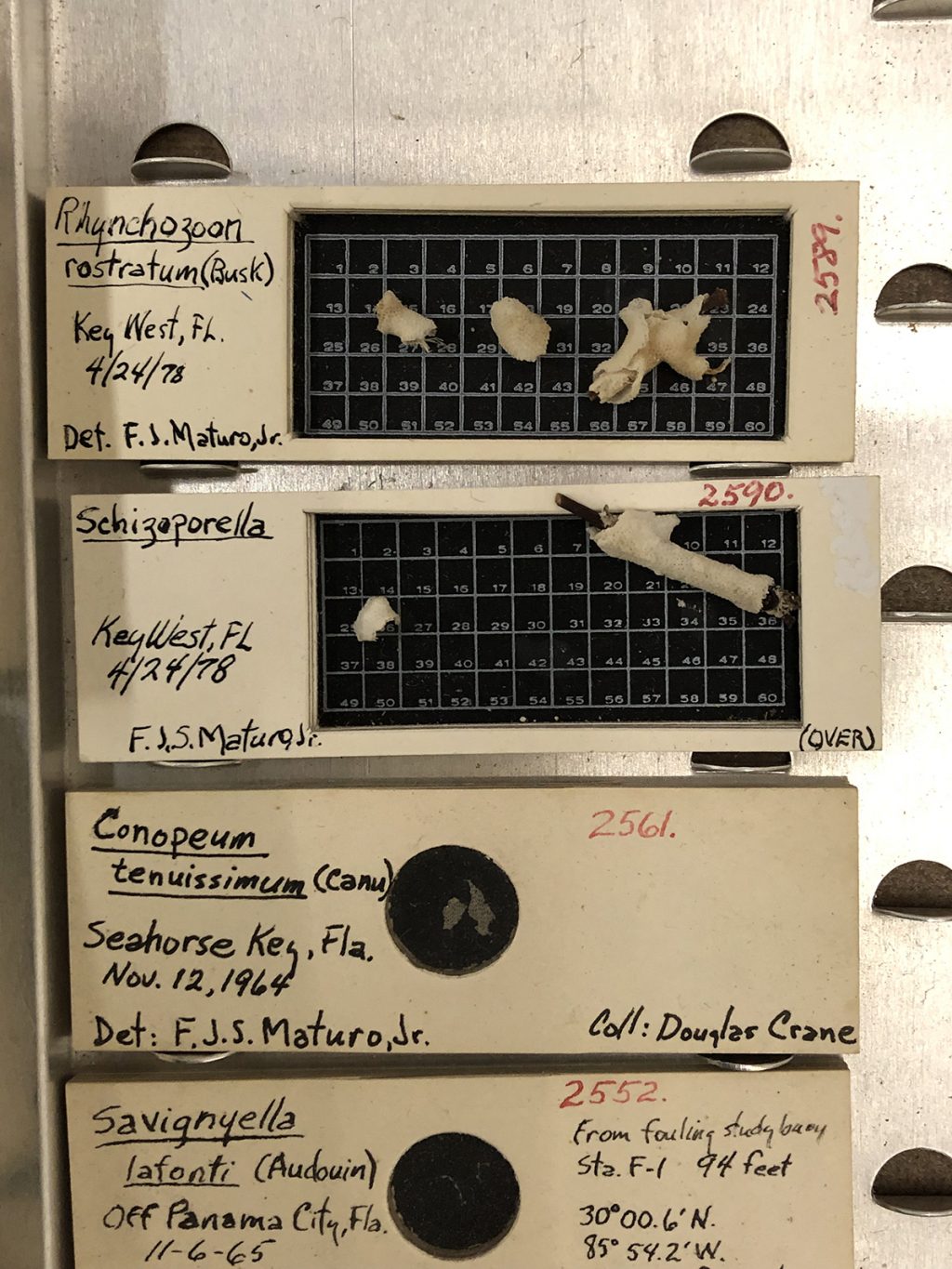 There are about 6,000 known bryozoan species, although the total number of species is likely several times that amount, according to Paulay. Bryozoans are frequently overlooked in the marine environment because of their small size.

“This is a relatively recent, quantitative collection. Every critter that moved into these platforms was preserved,” Paulay said. “Reefs are changing really, really fast, and this provides a valuable snapshot of reef life today.”

Paulay said sharing these additions with researchers through digitization and specimen loans will be a top priority. Invertebrate zoology has an extremely diverse user pool, and specimens help answer a variety of research questions, from understanding biodiversity to tracking changing ocean chemistry to identifying seafood remains from archaeological sites, he said.

“The important thing is being able to capture data and organize the collection in a useful way and letting researchers know it’s available. Gathering and sharing any information about our biosphere is our primary goal.”

John Slapcinsky, collection manager of invertebrate zoology, is a co-principle investigator on this grant.