by Halle Marchese • January 14, 2021
Now known as Timucua heart lichen, the species was misidentified by its original collectors. Up to 90% of its native habitat has been replaced by citrus groves and urbanization, but scientists remain optimistic that it still exists in the wild. Photo courtesy of Robert Lücking

Scientists have found a new species of fleshy verdigris lichen, thanks to DNA analysis of museum specimens. Misidentified by its original collectors, the lichen is only known from 32 specimens collected in North and Central Florida scrubland between 1885 and 1985. Now the hunt is on to find it in the wild – if it still exists.

The lichen, named Cora timucua in honor of Florida’s Timucua people, is critically endangered, even more so than the federally protected Florida perforate reindeer lichen, and possibly extinct. Researchers are holding out hope that C. timucua may persist in undisturbed pockets of the state’s dwindling pine scrub habitat, though recent searches came up empty.

“The million-dollar question is ‘Where is this lichen?’” said Laurel Kaminsky, a digitization manager at the Florida Museum of Natural History and co-author of the study. “The optimist in me says it’s still out there.”

Kaminsky said the sparse information recorded by the lichen’s collectors makes it difficult to retrace their steps. More widespread in the early 20th century, C. timucua was collected only from the Ocala National Forest and O’Leno State Park after 1968, two of Florida’s last remaining scrub ecosystems. Citrus groves and urban developments have replaced up to 90% of the state’s sand pine scrub.

“If it’s anywhere, it’s going to take a lot of looking in very specific habitats to find it,” Kaminsky said.

Affectionately dubbed “Timucua heart lichen,” the new species resembles a shelf fungus and is about the size of a sand dollar with scalloped edges. It can be distinguished from wood-rotting fungi by its texture: felty and papery, with curved lobes and a cracked underside.

But its color is an enigma. The lichen is light gray when dry, but specimens turn a deep blue-green and bleed a reddish-brown pigment when wet in a laboratory setting. Without photos and detailed descriptions of the lichen in nature, scientists don’t yet know how it reacts to moisture in the wild.

“In general, people take nature for granted, and the Timucua heart lichen story might tell us sometimes we are too late,” said Manuela Dal Forno, senior author of the study and a lichenologist at the Botanical Research Institute of Texas. “Right now, we need everybody’s help in trying to locate this lichen in Florida.” 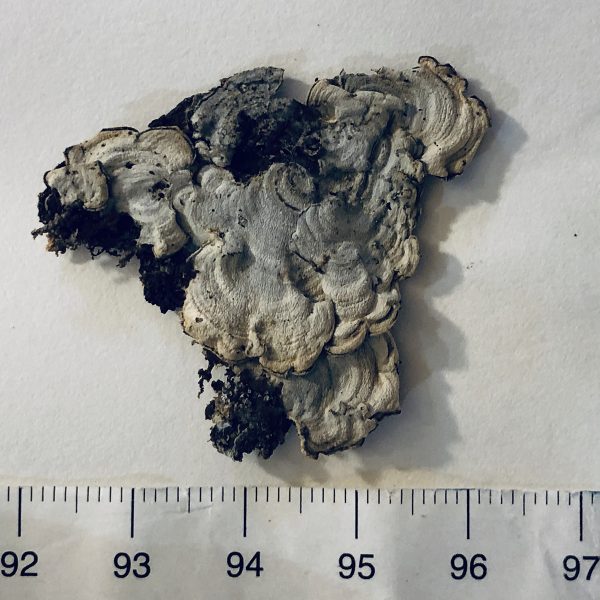 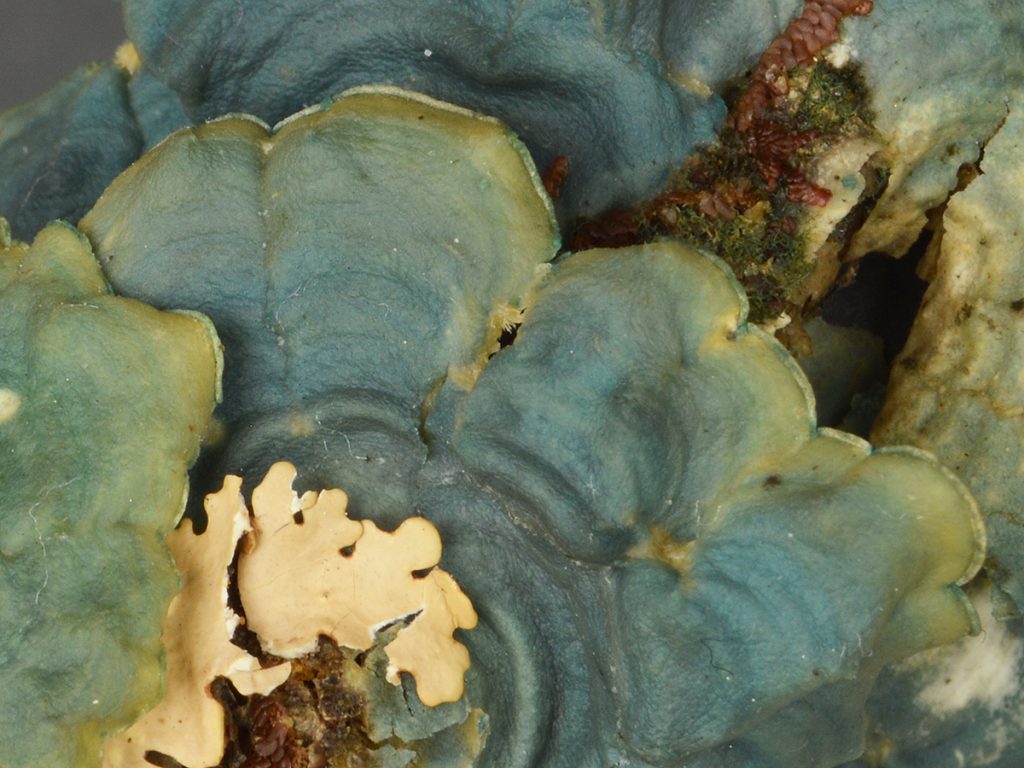 Scientists also found that Timucua heart lichen bleeds a rust-colored pigment when wet in a lab. Because the new species has yet to be studied in the wild, researchers don’t know how it reacts to moisture in nature.

Kaminsky said Timucua heart lichen likely prefers old-growth pine scrub habitat, which has taller trees and established populations of native Florida plants, such as rusty lyonia, a shrub characterized by reddish fibers lining its leaves. But hikers should avoid collecting any potential specimens they find: Instead, they can photograph the lichen and upload images to the Timucua Heart Lichen Project on the community science platform iNaturalist for identification.

Lichens are partnerships between fungi and photosynthesizing organisms and play a key role in their ecosystems by enriching soils and cycling nutrients. But much of the world’s lichen diversity remains hidden. A chronic shortage of lichen experts led to the delay in Timucua heart lichen’s discovery, Kaminsky said. She added that Florida could harbor as many as 1,000 lichen species, many of which remain undescribed and whose populations could also be imperiled.

A previous survey of South Florida’s Fackahatchee Strand Preserve led by Robert Lücking, a curator at Berlin’s Botanical Garden and Botanical Museum and lead author of the C. timucua study, found more than 400 lichen species in about 250 acres. Of the 400 species, 18 were new to science and 100 had yet to be recorded in North America.

“This emphasizes how little we know about lichen diversity and their genetic information, as well as the importance of digitization projects,” said Dal Forno, also a research associate at the Smithsonian’s National Museum of Natural History. “There are so many lichens out there, but not enough lichenologists to study them.”

Timucua heart lichen belongs to the genus Cora, a group of nearly 200 tropical lichens – once thought to be a single species – typically found in mountain habitats. Its discovery in Florida is the northernmost record of a Cora species, and the new species is the sole representative of its genus in the U.S.

Even if the species is extinct, studying its DNA could help scientists understand how the species arrived in Florida. Timucua heart lichen’s closest known relatives are in Colombia and Brazil, raising questions about how C. timucua was able to grow in a habitat so different from its sister species, Dal Forno said.

Increasingly, researchers need not pack a tent and head into the field to find new species. Instead, they can search online databases of specimen data from museums around the world. In 2012, a National Science Foundation grant helped scientists digitize lichens from the University of Florida Herbarium, uploading basic specimen information and images to two international data networks, the Global Biodiversity Information Facility and the Consortium of North American Lichen Herbaria.

It was on the web that Lücking and Gary Perlmutter, acting curator of lichens at the University of North Carolina at Chapel Hill herbarium and a study co-author, spotted clusters of Florida Cora specimens, far outside the genus’s known range. They contacted Kaminsky, suspecting DNA analysis would uncover misidentified specimens.

“I knew we had these specimens, but I just thought everybody else knew,” Kaminsky said. “The digitization just opened it up for other people to find it and do cool things with it.”

The study was published in The Bryologist.