During the ice ages of the Pleistocene, the Florida peninsula regularly expanded to twice its current size as glaciers grew near the planet’s poles, only to be reduced to a series of islands as melting ice returned to the sea during warm periods. All told, glaciers advanced and retreated 17 times, and according to a new study, the resulting environmental instability may have contributed to the incredible plant diversity found in Florida today.

Researchers from the Florida Museum of Natural History came to this conclusion while studying scrub mints, a unique group of plants endemic to the southeastern U.S. that radiated during the ice ages. Cyclically marooned on isolated islands as seas rose and fell, mint populations became genetically isolated and diverged over time, generating multiple new species.

Despite their long winning streak, scrub mints have recently been hit head on with the threat of extinction due to human-mediated habitat destruction and impending climate change. Of the 13 species endemic to Florida, eight are listed as either state or federally endangered.

“The most remarkable thing about this group is how rare they are,” said lead author Andre Naranjo, who completed the study while working as a doctoral student in the University of Florida’s department of biology. “One species, Conradina etonia, only grows within a 30-square mile area, and if you were to pave over that, that’d be it. The species would be gone.”

Other scrub mints share a similar pattern. Lakela’s mint (Dicerandra immaculata) has been reduced to just a single population, most of which is located on privately owned lands. Scrub balm (Dicerandra frutescens) is restricted to Highlands County, FL where it grows along an elevated ridge increasingly checkered by development. Further west, the Apalachicola rosemary (Conradina glabra) has been reduced to just ten known locations in a single region of the Florida panhandle.

Scrub mints are an important source of nectar for native pollinators, especially bees. 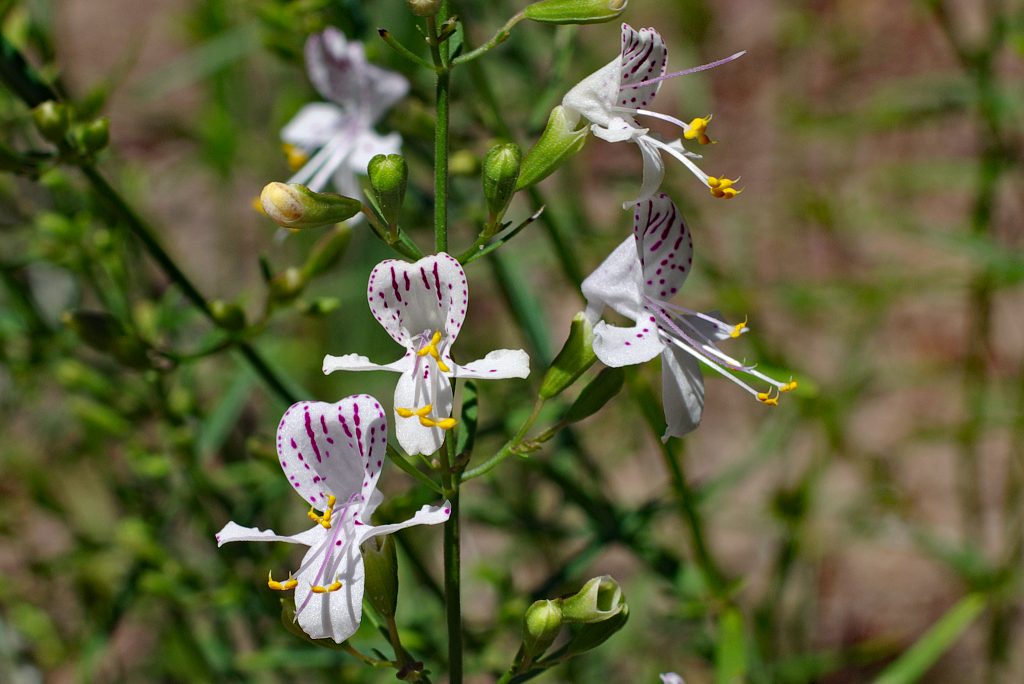 Scrub mints have unique horned anthers (yellow) that help ensure pollen isn’t eaten by marauding insects but can still be deposited on visitors in search of nectar. 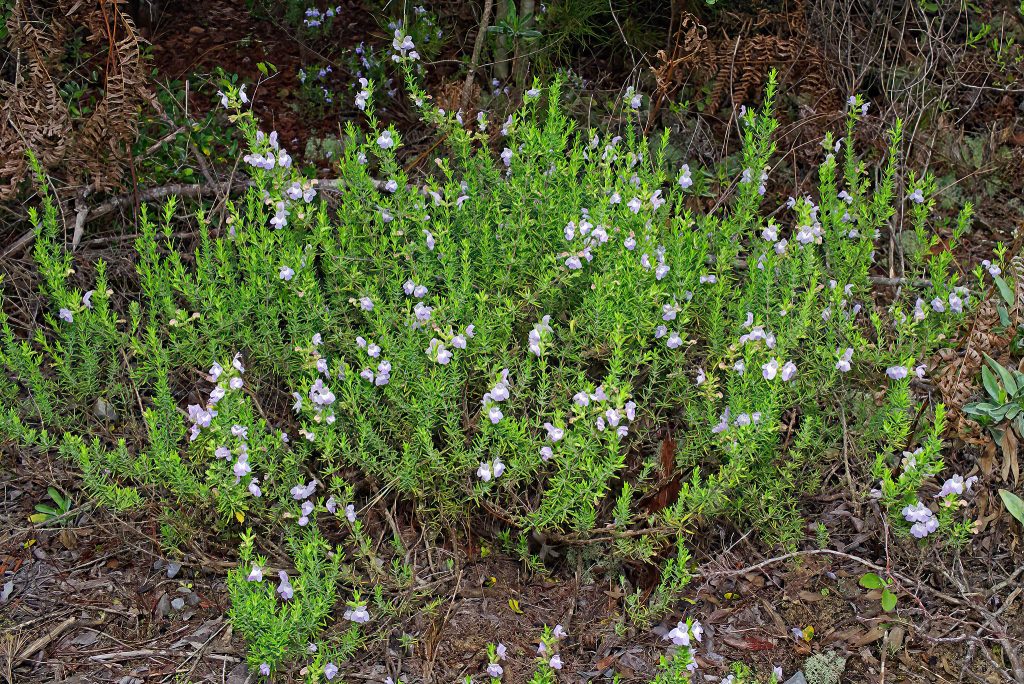 The current plight of scrub mints and other groups like them offers only a partial explanation of why they have been pushed so far to the sidelines. To get the full picture, says Naranjo, you have to take a much longer view of how species have fared over time, one that covers several million years of their natural history.

Naranjo wanted to know where scrub mints came from, when they originated and how they ended up with their current distributions. Building on his previous work, Naranjo used a new method for reconstructing historical environments developed by co-author Ryan Folk, a former postdoctoral associate at the Florida Museum of Natural History who joined the faculty at Mississippi State University in 2019.

By inputting information about the plants’ current habitats, such as temperature, precipitation and soil type, Naranjo could then trace their geographic history. The result was a detailed map that pinpointed the most suitable environments for each of the 22 species, half of which are endemic to Florida.

Nearly four million years ago, a scrub mint species growing in the Apalachicola River Basin of Florida shed a fine layer of seeds on the sandy soil below. Each no larger than a coarse grain of sand, the seeds don’t often travel far, which researchers suspect is a major cause of their rarity. But they’re also equipped with an opportunistic deployment mechanism that occasionally enables long-distance transport.

Scrub mint seed coats are perforated with glands that exude small amounts of viscous oil, Naranjo said. “When it rains really hard, the water forms little streams that drain the sand away from the scrub habitats. If the seeds land in these streams, their mucilaginous coating reduces friction, which helps carry them a few meters away from the parent plant.”

Whether all at once or in stages, a seed or seeds from the original population in Apalachicola somehow traveled potentially hundreds of miles east, ultimately leading to the establishment of mints in the Altamaha region of Georgia. Seeds from these newly established populations may have floated down rivers and streams into peninsular Florida, where they washed ashore on the ancient Lake Wales and Atlantic Coastal Ridges.

Throughout the ice ages, the population that remained in the west radiated into the false rosemaries (genus Conradina), while those in the east gave rise to the genus Dicerandra. The groups occasionally crisscrossed in a complex migration pattern that resulted in distant relatives sharing the same environment, a family reunion on a millennial timescale.

Scrub mints are merely one example of unique Florida plants that originated in the peninsula that are now imperiled due to habitat destruction, fire suppression and competition with invasive species. The Lake Wales Ridge, where many scrub mints evolved and which functioned as an ark for plants and animals retreating from rising seas, has lost more than 85% of its natural habitat to urbanization and agriculture.

Florida is also part of the North American Coastal Plain, which was listed in 2015 as one of Earth’s 36 biodiversity hotspots, defined as a region harboring at least 1,500 endemic species and which has lost 70% or more of its original vegetation.

“We need to start thinking about conservation in a broader context than just individual species,” Naranjo said, emphasizing the focus instead should be shifted toward preserving entire regions and environments. “Our hope is that this research can be used as a rubric to study other endemic plants and further refine a comprehensive conservation approach for those areas most at risk of being developed.”

The authors published their study in the Journal of Biogeography.

Ryan Folk, of Mississippi State University and Matthew Gitzendanner, Douglas Soltis and Pamela Soltis of the Florida Museum of Natural History are also co-authors on the study.