by Jerald Pinson • April 6, 2022
Bryozoans are an incredibly old group, with fossils that extend back prior to the evolution of life on land. Researchers recently published the largest genetic study on bryozoans, highlighting their relationships and the important role parental care has played in their survival and diversity. This image is of an encrusting cheilostome, Membranipora membranacea, collected in British Columbia. Florida Museum Invertebrate Zoology photo

The spindly filaments and coral-like colonies of the ancient phylum of marine animals known as bryozoans likely aren’t the first thing that come to mind when you envision safe and protective child care.

But a new study on the 600-million-year history of these obscure animals highlights the important role good parenting has played in their enduring success. In one of the largest genetic analyses of invertebrate marine organisms to date, researchers sequenced DNA from hundreds of alcohol-preserved specimens stored in more than 20 museums around the world.

“There are about 7,000 known species of living bryozoans, and their actual diversity likely numbers in the tens of thousands,” said Gustav Paulay, co-author on the study and curator of invertebrate zoology at the Florida Museum of Natural History. “They’re close to vertebrates in terms of diversity, and yet we hardly know anything about them. This is the first big phylogenetic study of the group.”

The researchers, led by a team at the University of Oslo in Norway, used DNA sequences to map out the relationships among species and trace their way back to key events that occurred throughout the evolutionary history of bryozoans. Their results indicate that species in the order Cheilostomatida, which today make up about 80% of bryozoan diversity, evolved specialized nursery cells on at least five separate occasions.

The nurseries in question come in a variety of forms, from podlike ovicells that blanket the organism’s upper surface to brooding sacs, where embryos are supplied with nutrients in thick-walled internal chambers. But each of these nurseries isn’t just a cell.

Bryozoans are colony-forming organisms comprised of individual animals called zooids. For any given plate-shaped colony encrusting the surface of an ocean bed or sliver of seaweed, there can be up to thousands of individual zooids, all cooperatively fused together into a chimeric body scouring the currents for food.

The majority of non-cheilostome bryozoan colonies are made up of normal feeding zooids, often small tubes from which a retractable cluster of tentacles can extend to pull in food morsels. These animals find strength in numbers, combining to form intricate branching patterns or delicate lacing that give them their namesake of moss animals. But there’s very little in the way of variation or division of labor, their colonies comparable to small farming villages.

Cheilostomes are decidedly less obdurate. If other bryozoan colonies are villages, cheilostomes form diverse cities. They have the regular complement of feeding zooids that gather food, but these are merely one type among a variety of specialized structures. There are species with a built-in cleaning and locomotion system made of animals with a long protruding hair called vibracula that allow the colony to “walk” through coordinated movement.

Many cheilostomes sport an array of pincerlike appendages resembling disembodied bird beaks that clamp down on marauding predators. “Sessile organisms are subject to whatever wants to come along and eat them,” Paulay said. “But cheilostomes are the masters of defense, which they’ve experimented with in many different ways.”

Even the feeding zooids are specialized, with hinged lids and calcified membranes that aid in protection. 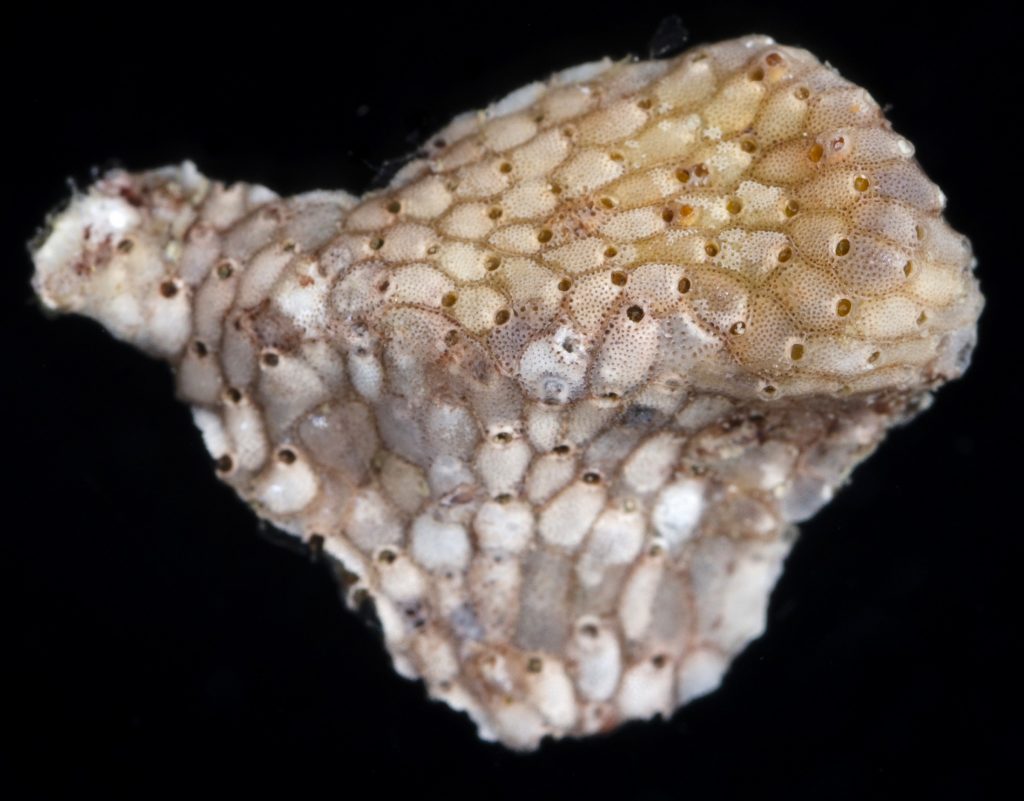 Cheilostomes have evolved diverse architectures that have allowed them to exploit multiple marine habitat types. Shown is a specimen of Dengordonia uniporosa collected off the coast of Oregon. 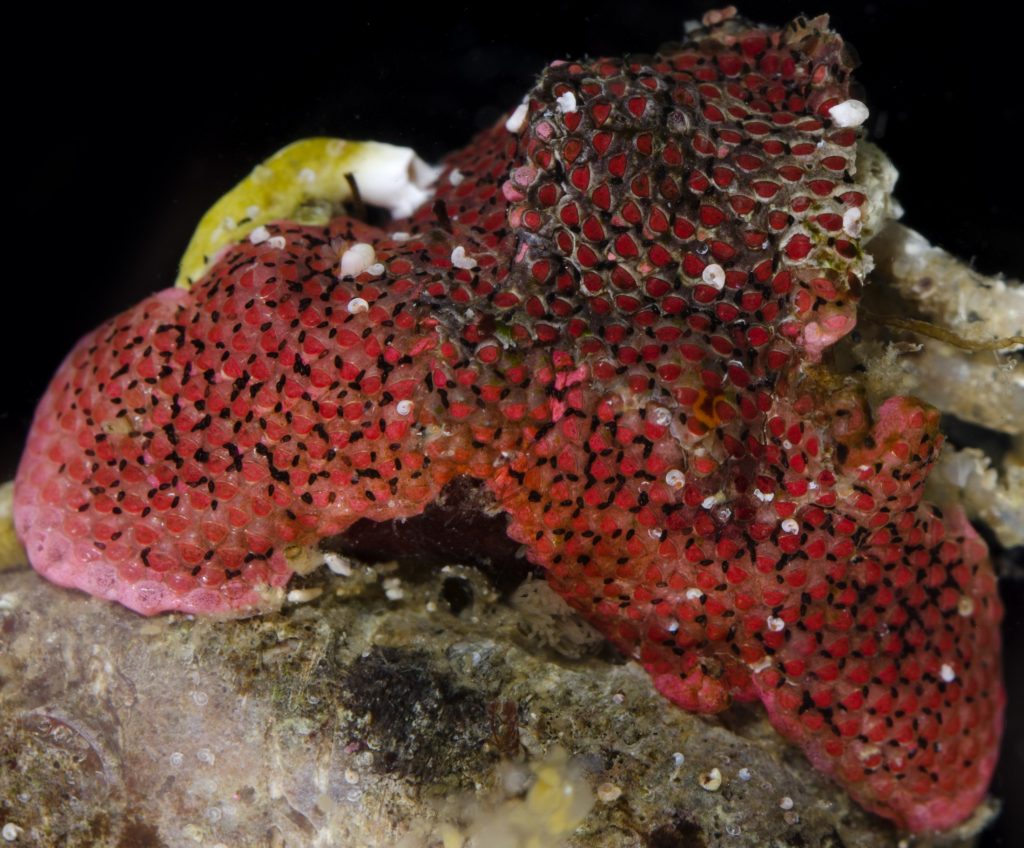 Bryozoans, such as this specimen of Integripelta bilabiata, can have hundreds to thousands of individual zooids fused together into a collaborative colony. 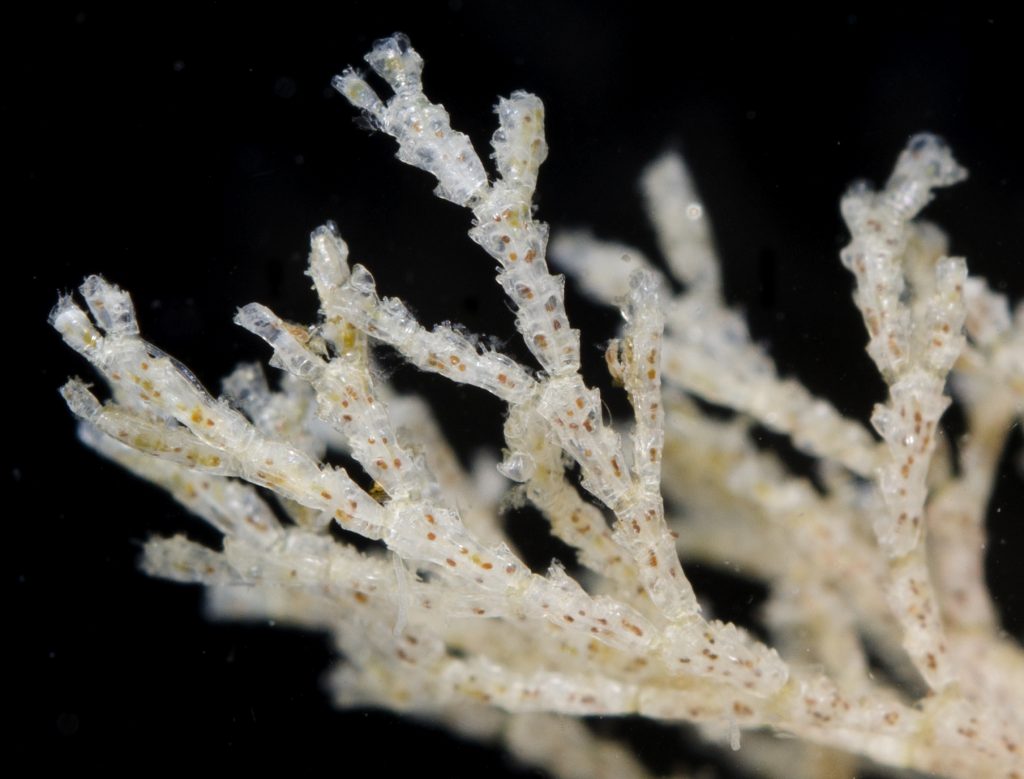 Many bryozoans form colonies that resemble small trees or shrubs, such as this specimen of Tricellaria erecta, collected in British Columbia. 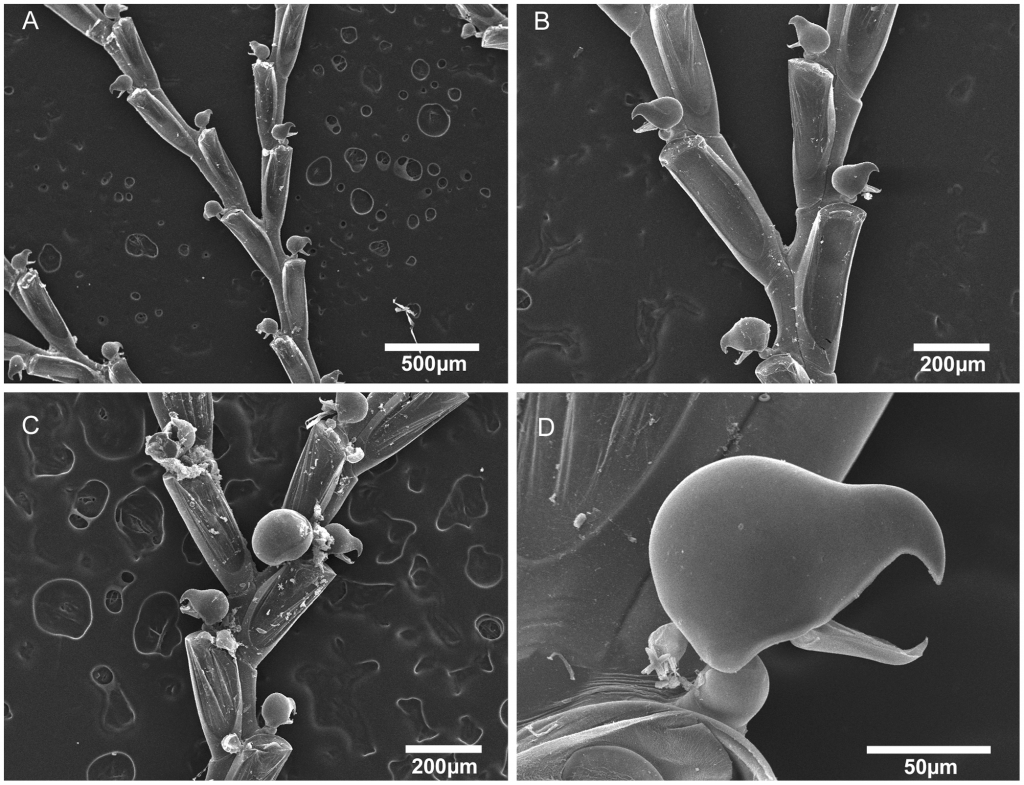 The variety of zooid types are easy to distinguish in many bifurcating zooids, such as this specimen of Bugula biota, which has a prominent ovicell (circular) and defensive avicularia shaped like bird beaks.

All of these traits have made cheilostomes an incredibly resilient group of organisms and enabled them to radiate into marine habitats from the Tropic of Cancer to the Arctic Circle and the shallows of intertidal flats to the lightless depths of deep-sea communities.

Among their various specialties, many cheilostomes create brooding chambers to nurture their young, which previous studies indicate may have led to a steep uptick in their diversity.

Bryozoans that lack specialized nurseries start out their lives as drifting plankton, which are carried long distances for months at a time before settling down in a new environment and metamorphosing into a zooid called an ancestrula, creating copies of itself to form a new colony. Many of these species have extensive, sometimes global ranges as a result.

In contrast, many cheilostome embryos spend most of their larval development sheltering within the confines of ovicells. The larvae lack a gut and are entirely dependent on their parent colony for nutrition and protection. When they finally strike out on their own, they tend to stay comparatively close to the parent colony, the equivalent of starting a new suburb nearby. “Sometimes they’ll settle within inches of the parent,” Paulay said.

With less gene flow between distant populations, colonies in separate geographies are isolated from one another and evolve along divergent paths, Paulay explained. “The differentiation from isolation becomes enormous, allowing them to quickly build up diversity.”

It’s unclear whether this tendency to stick around led to high species diversity in cheilostomes. The researchers didn’t find any strong evidence that brooding cheilostomes had higher rates of diversification than those that lacked nursery structures.

What is clear is brooding zooids confer an obvious benefit to the bryozoans that produce them. According to their results, at least five cheilostome groups evolved ovicells and brooding chambers independently of each other. There also weren’t any instances of evolutionary reversals, meaning once a group developed nurseries, it never stopped producing them.

Specialized zooids have made cheilostomes exceptionally successful and diverse, even when compared with other marine organisms. For every species of coral in the world’s oceans, there are 10 times as many bryozoan species busily filtering aquatic environments, most of which are cheilostomes. Given how little we currently know about bryozoans’ baseline biology, senior author Lee Hsiang Liow, a professor at the Natural History Museum at the University of Oslo, hopes this study will provide a platform from which scientists can launch future investigations.

“Now that we know how these species are related, we’re better able to study why some species thrive better than others,” she said. “Is it because some had more brooding chambers or because they are better competitors? Or both? Cheilostomes are great model systems because they preserve well, and their reproductive methods are directly documented in the fossil record.”

The study was published in the journal Science Advances.