by Jerald Pinson • February 16, 2022
The fruit of Euphorbiotheca deccanensis was likely fossilized just before the asteroid impact that decimated the dinosaurs 66 million years ago. The fossil is part of the Deccan Traps, expansive layers of solidified magma in central and western India that were deposited in one of the largest series of volcanic eruptions in Earth's history. Florida Museum photo by Kristen Grace

Just before the closing scenes of the Cretaceous Period, India was a rogue subcontinent on a collision course with Asia. Before the two landmasses merged, however, India rafted over a “hot spot” within the Earth’s crust, triggering one of the largest volcanic eruptions in Earth’s history, which likely contributed to the extinction of the dinosaurs.

In a recent study, scientists excavating the fossilized remains of plant material wedged between layers of volcanic rock describe a new plant species based on the presence of distinctive fruit capsules that likely exploded to disperse their seeds. The fossils may be the oldest fruit discovered to date of the spurge family (Euphorbiaceae), a group of plants with more than 7,000 species that include well-known representatives such as poinsettia, castor oil plant, rubber trees and crotons.

The fossilized fruits were discovered near the village of Mohgaon Kalan in central India, where the remains of the once-widespread volcanic rock lie just beneath the surface in a complex mosaic.

“You can walk around these hills and find chunks of chert that have just weathered up through the topsoil,” said senior author Steven Manchester, curator of paleobotany at the Florida Museum of Natural History. “Some of the best collecting is where farmers have plowed the fields and moved the chunks to the side. For a paleobotanist, it’s like finding little Christmas presents all along the edge of the fields.”

Although there is some uncertainty in the timing, the volcanic eruptions are thought to have lasted for up to 1 million years, occurring in prolonged pulses that blanketed the surrounding landscape in thick lava layers up to 1 mile deep. Today, the basalt rocks leftover from the eruptions, known as the Deccan Traps, cover an area larger than the state of California.

The most violent of the volcanic events, which occurred at the tail end of the Cretaceous, may have been triggered by the asteroid impact half a world away.

“The impact in the Yucatan may have caused seismic perturbations that actually disturbed the regime on the other side of the planet, causing lava to erupt,” Manchester said.

Sandwiched between the basalt, paleontologists have found shales, chert, limestone and clays stacked in a giant layer cake of alternating bands, most of which are rich in fossilized plants and animals. These fossils provide a glimpse into what seem to have been relatively calm periods of stability between massive lava flows.

The newly described species were likely shrubs or small trees that grew near hot springs created by the interaction of groundwater with naturally heated rock beneath the surface, similar to present-day environments in Yellowstone National Park. At the time of their preservation, India was inching its way through the Earth’s equatorial zone, creating warm, humid conditions that supported a number of tropical species, including bananas, aquatic ferns, mallows and relatives of modern crepe myrtles.

Petrified wood is a common find in the Deccan traps, but most of them have small diameters, suggesting a lack of large trees whose conspicuous absence has stumped scientists trying to stitch together the ecological history of the region.

“India was positioned at a low latitude, so we’d expect to find big forest giants. But that’s not what we’re seeing,” Manchester said.

It’s unclear why the trees were unable to obtain greater stature, but Manchester suspects the underlying basalt may have restricted the growth of roots. Alternatively, he said, the plants may have been part of young forests that grew in volcanically active regions, which would have wiped out the surrounding vegetation before it had a chance to mature. “You’re most likely to get fossils preserved when there’s been recent eruptions, which creates a lot of volcanic ash that can bury and preserve plants,” he said.

Scientists peel back the layers of mystery fruit

Fruits from the new species were found pristinely preserved in a matrix of chert by co-author Dashrath Kapgate. But with only the fruits to go on, determining which plants they belonged to required a significant amount of investigative research.

“It didn’t really fit well into any known plant group,” said lead author Rachel Reback, who studied the fossils while working as an undergraduate researcher at the Florida Museum. “We ended up having to take a large number of CT scans not only of the fossils we had but of the fruit of living species as well so that we could directly compare them.”

The researchers ultimately determined the fossils belonged to the spurge family by studying similar fruit specimens provided by the Smithsonian Institution. However, one of the fossils was so unlike anything they’d seen, they determined it represented an entirely new species belonging to the fossil genus Euphorbiotheca.

The orientation of fibers inside the fruit indicated they were likely explosive, a common means of seed dispersal in other euphorbs, including cassava, rubber trees, crown of thorns and castor oil plant. Once the fruit in these species has ripened, they begin to dry out, losing as much as 64% of their original weight, which builds up tension in the rigid outer layers. Once enough water has evaporated, “You hear this loud pop, and the seeds and pieces of the fruit go flying everywhere,” Manchester said, describing the process in rubber trees. “We think this is the case for these two fossil species as well, because we see the same anatomy, where the fibers in the inner and outer layers of the fruit wall are oriented in opposing directions, which helps build torque.” 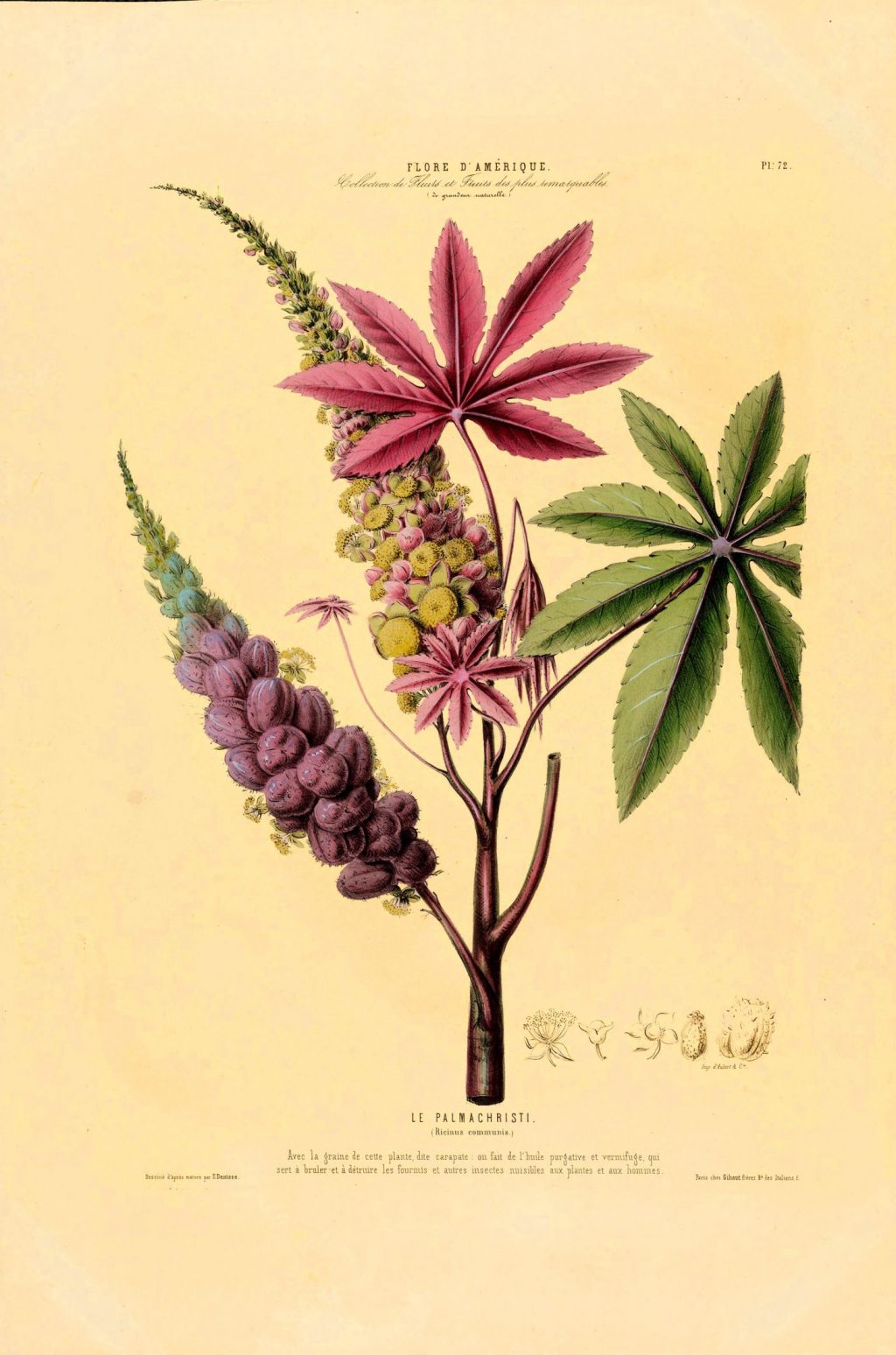 The seeds of castor bean (Ricinis communis) are among the most poisonous in the plant kingdom and produce the toxin ricin. Castor bean fruits catapult these toxic seeds away from the parent plant when they explode. 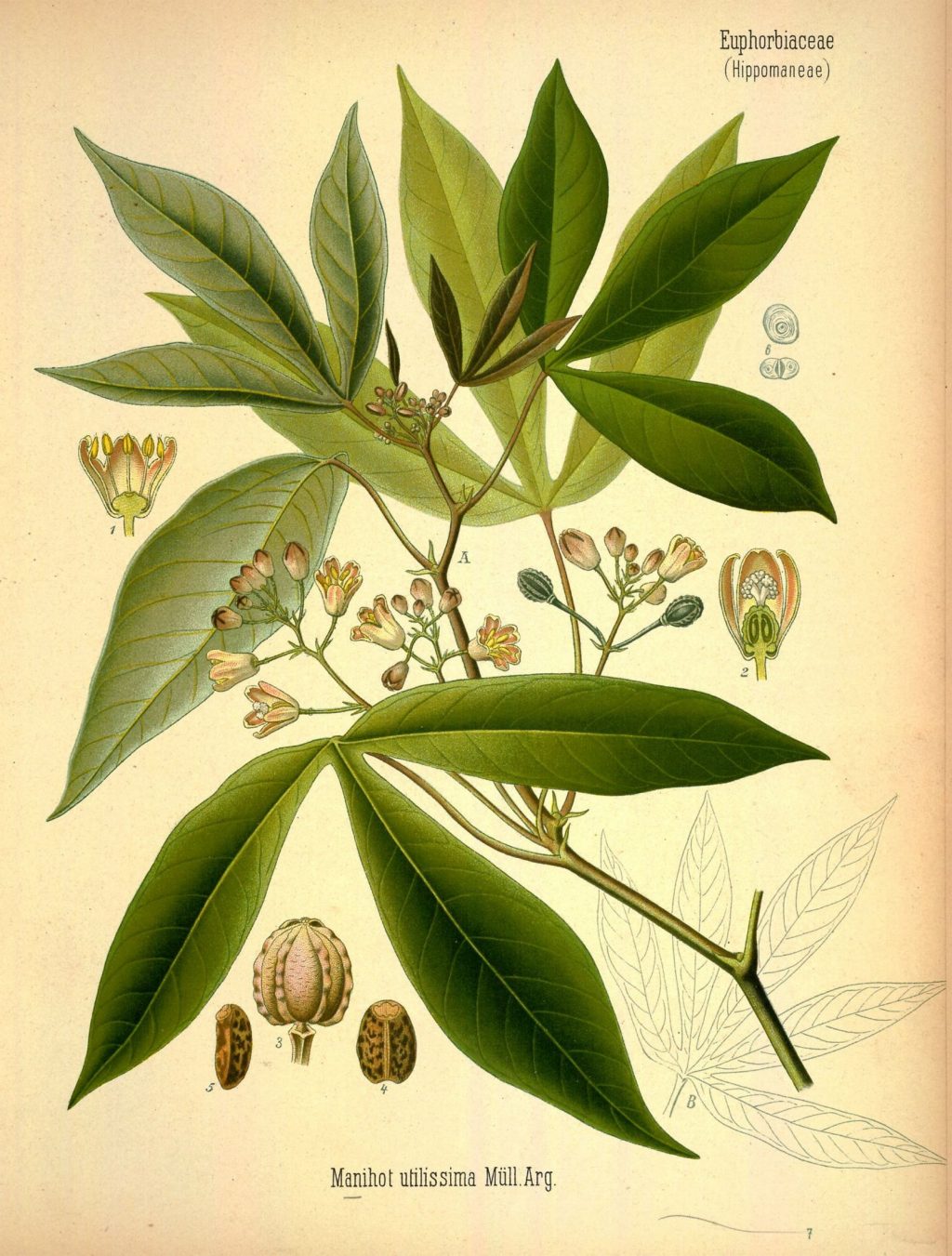 Cassava (Manihot esculenta) trees have fruit that explode to disperse their seeds. This species is best known for its starchy tubers, which serve as a major source of carbohydrates for communities in Central and South America. Tubers must be processed and cooked before consumption, as they contain varying amounts of cyanogenic glycosides. 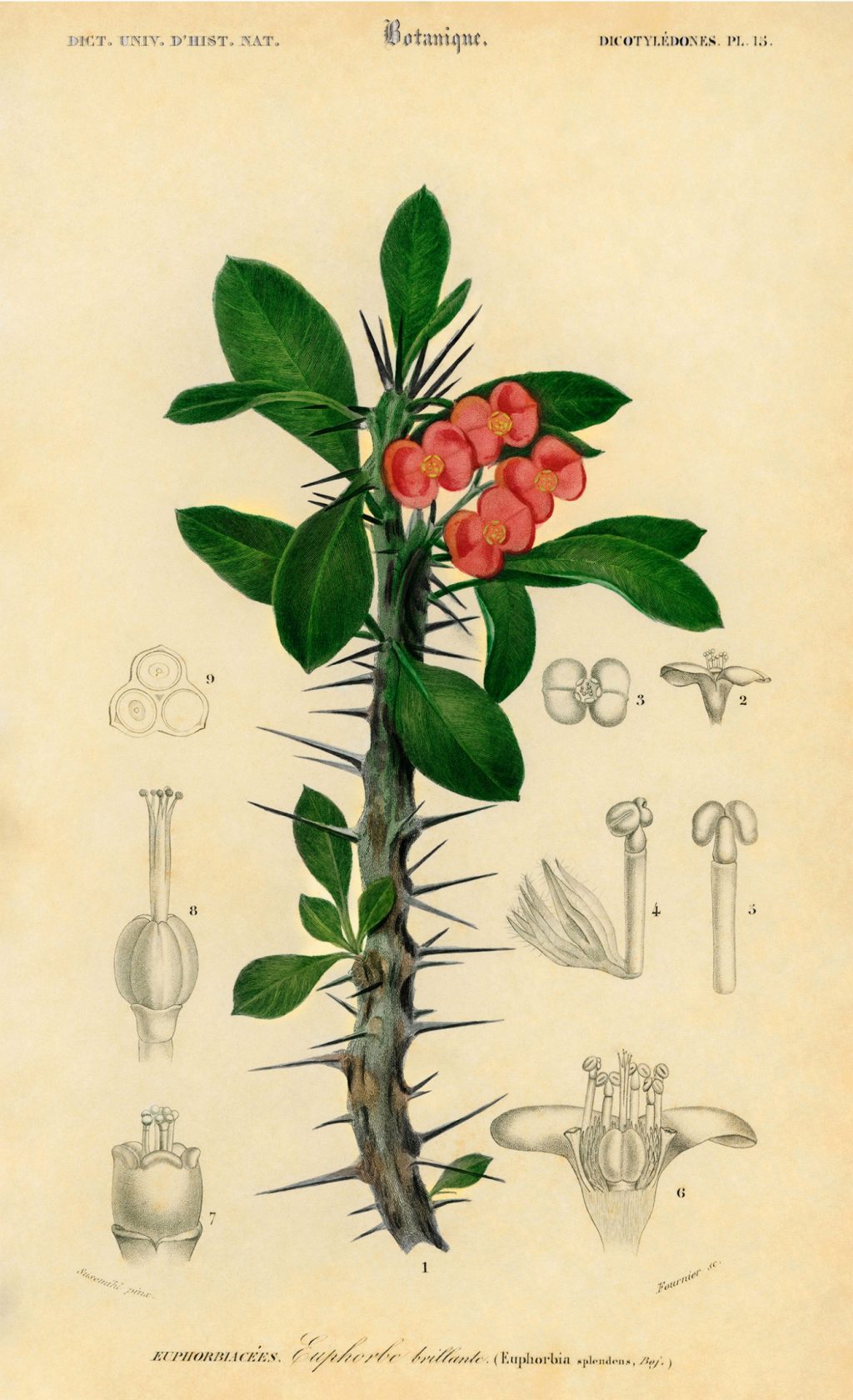 Crown of thorns (Euphorbia milii) is a common garden plant in the spurge family that disperses its seeds via exploding fruit.

India an incubation chamber for new groups and species

Fossils like these offer paleontologists tantalizing clues regarding the origin and movement of species. About 140 million years ago, a conjoined India and Madagascar began drifting away from the supercontinent Gondwana in the Southern Hemisphere, carrying with them plants and animals that evolved in isolation throughout the Cretaceous.

By the time India finally slammed into Eurasia, 10 million years after the extinction of the dinosaurs, it had given rise to an incredible diversity of life found nowhere else. It’s likely the first grapes evolved in India, as did the ancestors of whales. As the Himalayas took shape above the sutured landmasses, new groups of insect-eating pitcher plants, flightless birds, lizards, freshwater crabs, scorpions and praying mantises all made their way out of India and into new environments in Europe and Asia.

Manchester hopes these fossils and others like them coming out of the Deccan Traps will help illuminate the distribution of species at a critical time in Earth’s history. “What were the environments in India like at a time when it had not yet connected to Eurasia and how do they compare with other regions at that time?” he said. “It’s like filling in the pieces of a puzzle.”

Ken Wurdack of the National Museum of Natural History also co-authored the study.

The team published its results in the International Journal of Plant Sciences.

Support for the research was provided by the New Delhi University Grants Commission and the National Science Foundation.