by Natalie van Hoose • July 15, 2021
A paleontologist stands on an outcrop next to the Rio Guatemala, which flows through the township of San Sebastian, Puerto Rico. The site has yielded an abundance of fossils. including two teeth that belonged to a rodent with North American roots. Photo courtesy of Jorge Velez-Juarbe

Two fossil teeth from a distant relative of North American gophers have scientists rethinking how some mammals reached the Caribbean Islands.

The teeth, excavated in northwest Puerto Rico, belong to a previously unknown rodent genus and species, now named Caribeomys merzeraudi. About the size of a mouse, C. merzeraudi is the Caribbean’s smallest known rodent and one of the region’s oldest, dating back about 29 million years.

It also represents the first discovery of a Caribbean rodent from a North American lineage, a finding that complicates an idea that has persisted since Darwin – that land-dwelling mammals colonized the islands from South America. The presence of C. merzeraudi in Puerto Rico suggests a second possibility: Some species may have rafted from North America.

The tiny rodent joins two other types of animals, an extinct rhinoceros-like species and bizarre, venomous shrews known as Solenodons, as the only known examples of Caribbean land-dwelling mammals with North American roots.

“This discovery demonstrates that overwater dispersal from North America was also a potential pathway to the Caribbean,” said study co-author Jorge Velez-Juarbe, associate curator of mammalogy at the Natural History Museum of Los Angeles County. “This challenges what we thought we knew about the origins of Antillean terrestrial mammals.” 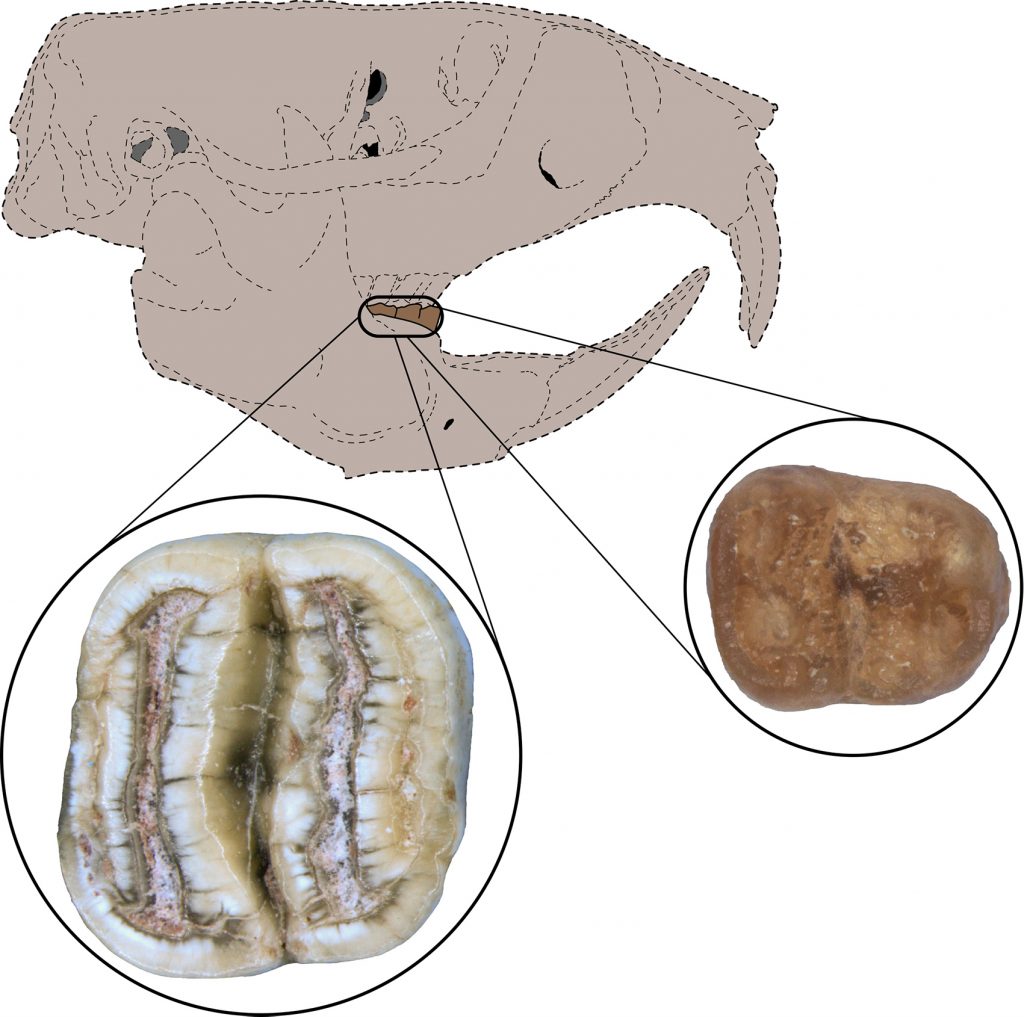 This artist’s reconstruction shows the likely position of these fossil molars in Caribeomys merzeraudi‘s skull. These two teeth are the only evidence of this species thus far. 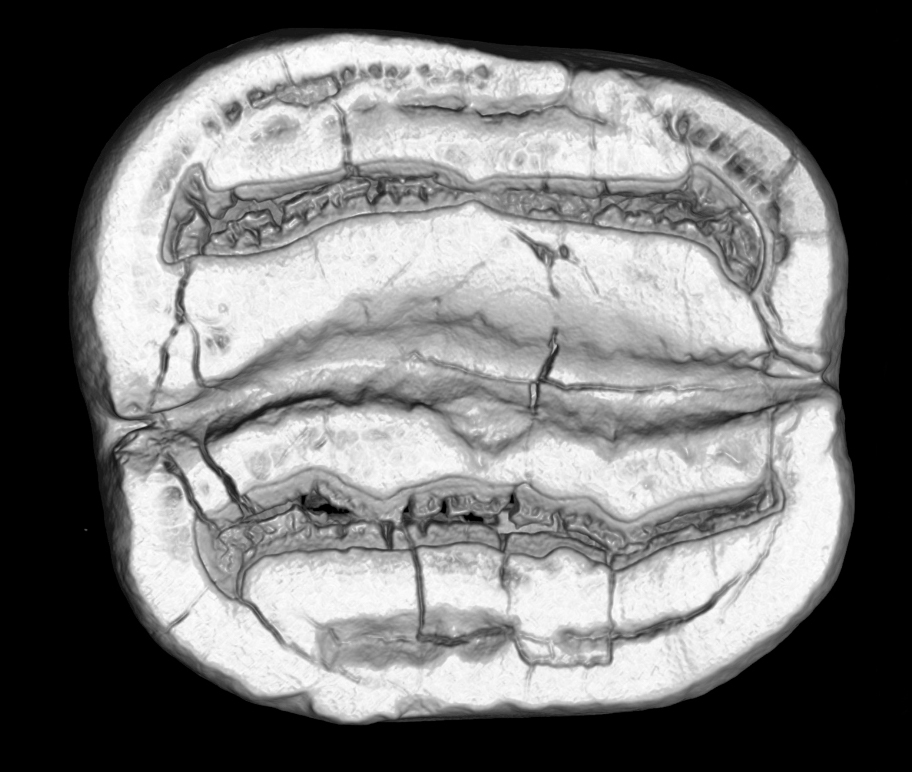 Researchers believe this molar came from an old adult because of its advanced state of wear. This tooth is the holotype of Caribeomys merzeraudi, meaning that the species description is based on this specimen. 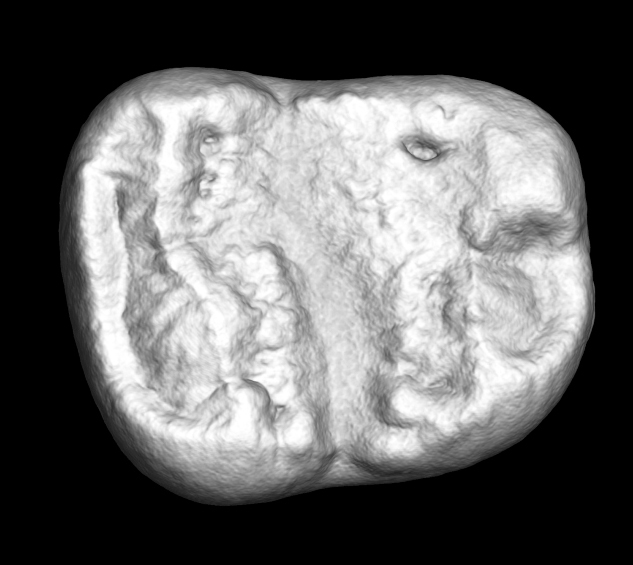 This tooth likely belonged to a newborn. A thick layer of enamel helped preserve the teeth during fossilization.

While Caribbean ecotourism brochures generally don’t feature splashy images of rats, the islands were once home to a rich representation of rodents, including spiny rats, chinchillas, rice rats and hutias – all descendants of South and Central American forebears.

Fossil and molecular evidence suggest these rodents arrived in the islands in multiple waves over time, though how they got there – whether by scurrying over an ancient land bridge, island-hopping or rafting – has been hotly contested. The paucity of fossils from the early years of the Caribbean Islands further obscures the picture of the region’s past biodiversity.

Caribeomys merzeraudi’s teeth were so unusual that researchers initially struggled to discern what kind of animal they had come from, said study co-author Lazaro Viñola Lopez, a doctoral student in vertebrate paleontology at the Florida Museum of Natural History.

“We didn’t know what it was for several months,” he said. “We wondered whether this could be some other rodent from the Caribbean or even some kind of strange fish. It was so puzzling because they’re not similar to anything else we had found in that region.”

The team eventually pinpointed several tooth characteristics that are hallmarks of rodents known as geomorphs, a group that includes kangaroo rats, pocket mice and gophers. Caribeomys merzeraudi is the first geomorph found outside North America.

An exceptionally thick layer of tooth enamel, among other features, sets C. merzeraudi apart from its relatives and could indicate these rodents belonged to a distinct West Indian branch that evolved in isolation over several million years, Viñola Lopez said.

Scientists found the teeth while screen-washing sediment collected from a river outcrop in San Sebastian, a site that has yielded fossil sharks and rays, fish, turtles, a gharial, sea cows and the oldest known frog in the Caribbean, a coquí. In 2019, the team excavated fossil evidence of two large chinchillas, which likely grew up to 30 pounds. These South American rodents once shared Puerto Rico with the humble C. merzeraudi, which weighed less than a quarter pound.

Today, hutias, bats and Solenodons are the “last survivors of what was once a much more diverse group of Caribbean mammals” that included sloths and primates, Velez-Juarbe said.

Discovering C. merzeraudi opens up the tantalizing possibility that Caribbean mammals with North American origins may not be as exceptional as previously thought, Viñola Lopez said. But there’s only one way to find out: “Go back to the locality and see what else we can find.”

The researchers published their findings in Papers in Palaeontology.