by Natalie van Hoose • January 28, 2020
This skull of a Bahamian hutia, Geocapromys ingrahami, was collected in 1987 on Little Wax Cay, one of three cays where the last remaining members of the species live. Florida Museum photo by Kristen Grace

The Bahamian hutia, a large Caribbean rodent with a blissed-out disposition, presents a curious case study in how human food preferences can drive biodiversity, sometimes shaping it over 1,000 years.

The hutia, which resembles a bristly beanbag, flourished in the Bahamas for millennia, the islands’ only native terrestrial mammal. Today, only one population of Geocapromys ingrahami remains, divided among the scrubland and limestone cliffs of three small cays, and the species is considered vulnerable by the International Union for Conservation of Nature.

Humans have played a prominent and paradoxical role in the hutia’s boom-to-bust story, according to a new study led by Florida Museum of Natural History researchers.

Hutias were a savory source of red meat for the Lucayans, the islands’ earliest inhabitants, who arrived around AD 800-1000. Now, ancient DNA and radiocarbon dating suggest the Lucayans transported hutias from the Great Bahama Bank – where hutias landed during the last ice age, likely after rafting from Cuba – to Bahamian islands hutias had not inhabited previously, exploiting them as food. The findings illuminate how humans historically and actively shaped hutia diversity and distribution.

“We’re a funny, picky species with food,” said Michelle LeFebvre, Florida Museum assistant curator of South Florida archaeology and ethnography. “Our preference for what we eat has probably had a much bigger impact on global biodiversity over time than we appreciate, and hutias provide one example of that.”

Under Lucayan care, hutia populations thrived. But when Europeans landed in the Bahamas, they introduced new predators, such as cats, and competitors like rats and mice. Development subsequently degraded hutia habitat, and the species may have vanished if conservationists had not moved hutias to protected areas.

“We have not stopped messing with hutias over the past 1,000 years. We can’t help ourselves,” said the study’s lead author Jessica Oswald, a postdoctoral researcher at the Florida Museum and the University of Nevada-Reno. “For better or worse, Bahamian hutias are only alive today because of humans. We moved them to tiny islands where they’re protected, and probably the only way they are going to survive is if they live on cays devoid of people.” 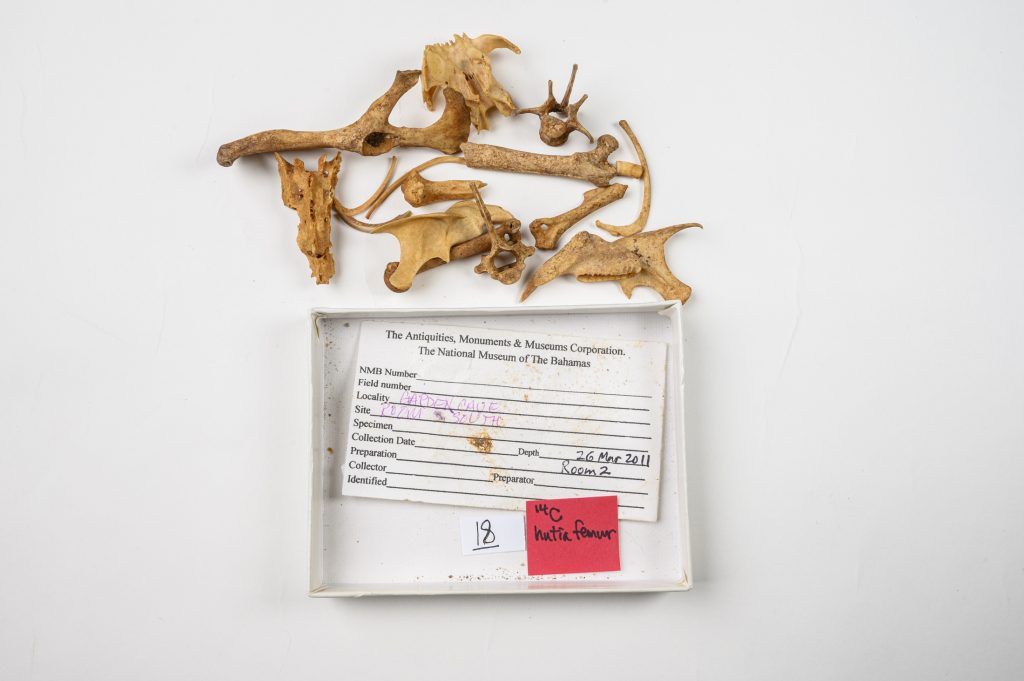 These hutia fossils were collected in a cave on Eleuthera on the Great Bahama Bank. Researchers often find hutia bones in the roosts of the now-extinct giant owl, Tyto pollens, a predator that stood more than 3 feet tall. 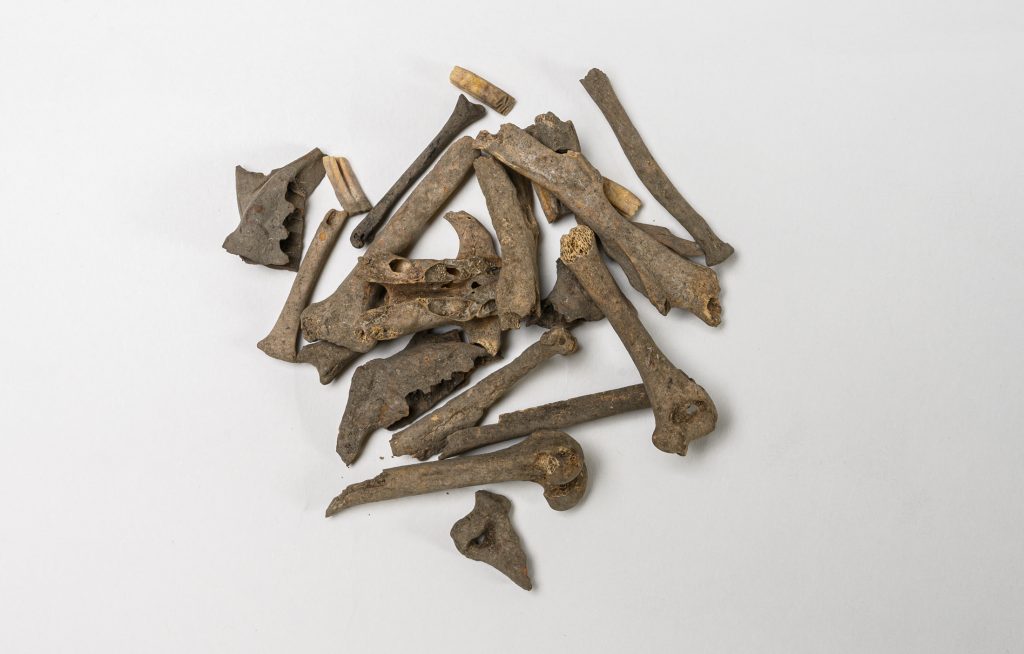 These hutia bones were excavated from an ancient trash heap on the Turks and Caicos Islands, evidence that early inhabitants exploited the rodents as food.

The researchers began comparing notes and decided to investigate the patterns they were uncovering by conducting the first ancient DNA study of the Bahamian hutia.

“We knew we had a question to chase,” LeFebvre said. “And then it turned out that there was a major human footprint.”

While G. ingrahami is the only hutia in the Bahamas, Cuba is the historical and modern center of hutia diversity and home to 10 of the 13 species living today. More than half of known hutia species have gone extinct over the past 12,000 years, but the group once boasted a range of habitats and sizes, from a 440-pound heavyweight in the Lesser Antilles to a pygmy-sized species found on Cuba.

Their temperaments also vary. Observing G. ingrahami, biologist Garrett Clough described it as a “most peaceable rodent” – but not all hutia species are mellow.

“On Cuba, there’s one species people treat as a pet and other species that could scratch your eyes out,” LeFebvre said.

The researchers’ findings supported previous evidence that the Bahamian hutia’s closest living relative is G. brownii, a vulnerable species on Jamaica. But they hypothesize the Bahamian hutia is a descendant of a Cuban species that reached the Bahamas about 10,000 years ago when low sea levels closed the distance between the islands to about 12 miles.

“Because so many hutias have recently gone extinct, we will need more ancient DNA from extinct species to test this hypothesis,” Oswald said.

Radiocarbon-dated fossils showed that hutias lived on the Great Bahama Bank before humans arrived – but none of the fossils outside of the bank were older than about AD 1300-1400, several centuries after human settlement. The researchers also found a striking genetic similarity between a population on Eleuthera, an island on the Great Bahama Bank, and a population on Abaco, part of the Little Bahama Bank. The two banks never connected, even when sea levels were at their lowest, suggesting people had ferried hutias across the channel.

“We would expect those two populations to be genetically distinct because they’re isolated, but instead, they look like they’re from the same population,” Oswald said. “You’re unravelling a mystery with DNA from fossils and trying to figure out ‘whodunnit.’ That’s what makes this so fun.”

A genetic split between hutias in the northern Bahamas and those south of Long Island is a puzzle the researchers intend to explore further.

“Did some kind of human selection impact that? Could other hutias have been introduced or made it over from Cuba?” LeFebvre said. “Genetics sets you on the path to answer those kinds of questions.”

The Bahamian hutia was believed to be extinct before Clough traveled to East Plana Cay, a small strip of uninhabited land, in 1966. The hutias he observed there were thought to be the last remaining examples of indigenous G. ingrahami. This study suggests, however, that hutias may have been introduced to the cay by the Lucayans, LeFebvre said.

While the Bahamian hutia is a survivor, its existence is also delicate, susceptible to hurricanes, disease, invasive species and landscape changes. Its conservation needs place its future in the hands of humans.

But the value in studies like this one is the millennia-long view it offers conservation decision-makers, LeFebvre said.

“Considering truly long-term anthropogenic influences on biodiversity is a crucial step to building and planning conservation efforts,” she said.

For Oswald, a paleontologist and evolutionary biologist who is an expert in ancient DNA analysis, the project offered a unique opportunity to collaborate with archaeologists.

“The combination of these fields is powerful. Michelle had evidence that humans were transporting hutias, and then we used data from an evolutionary field to help answer these questions. It speaks to what you can do when you bring together different fields.”

The study was published in Scientific Reports.

Funding for the research was provided by the National Science Foundation and the University of Florida Ornithology Endowment, supplemented by the Community Foundation of Broward.

Mice are shrinking, but are climate change and cities to blame?