by Marc S. Frank • March 13, 2019
The genus Trifolium, commonly known as clover, consists of about 255 species in the pea and bean family, or Fabaceae. Florida Museum photo by Radha Krueger

Fact 1: There are a lot of clovers!

The genus Trifolium, commonly known as clover, consists of about 255 species in the pea and bean family, or Fabaceae. Clovers live in temperate and subtropical parts of North and South America and the Old World. Three geographic regions have the most clover diversity: the Mediterranean basin, western North America and the highlands of eastern Africa. The genus name refers to the distinctive leaves, which are typically trifoliate, meaning that they have three leaflets. Some species of clover have up to nine leaflets.

Fact 2: Most of the clover species in Florida are not native.

Fact 3: Clovers are important in agriculture.

More than a dozen species of clover are cultivated around the world either as forage for livestock or as green manure crops, which are grown and then tilled under to improve the soil. Many species of clover have nodules on their roots that provide a home to bacteria in the genus Rhizobium, which convert nitrogen from the air into a form that plants can use. This is why many clovers are a great source of nutrition for livestock and wildlife and a good way to improve soil fertility.

Clovers are also very attractive to a wide variety of pollinators, including butterflies, moths, wasps, native bees and honeybees. They are among the most important nectar sources for honeybees in North America. Clover honey is popular because of its mild, sweet flavor. 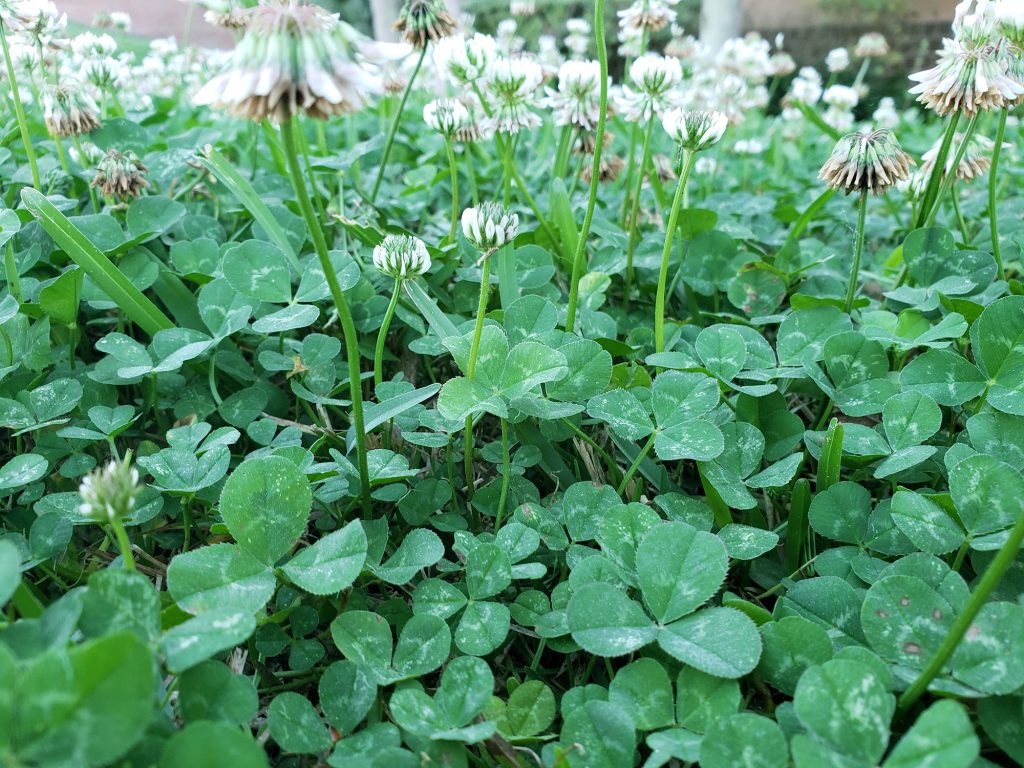 Most of the clovers found in Florida are exotic species that have escaped from cultivation and are found in disturbed sites like pastures and roadsides. 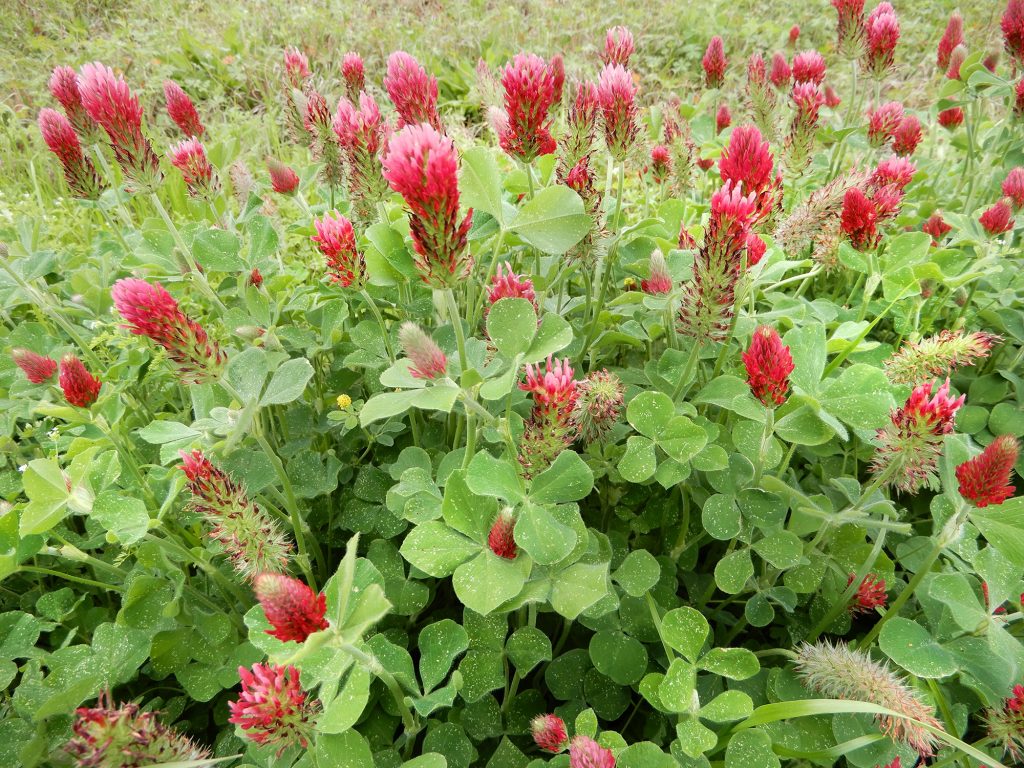 Crimson clover or scarlet clover, Trifolium incarnatum, is a European species that is commonly grown as a forage and cover crop. In Florida, it has escaped from cultivation and is often found on the Panhandle but rarely on the peninsula. 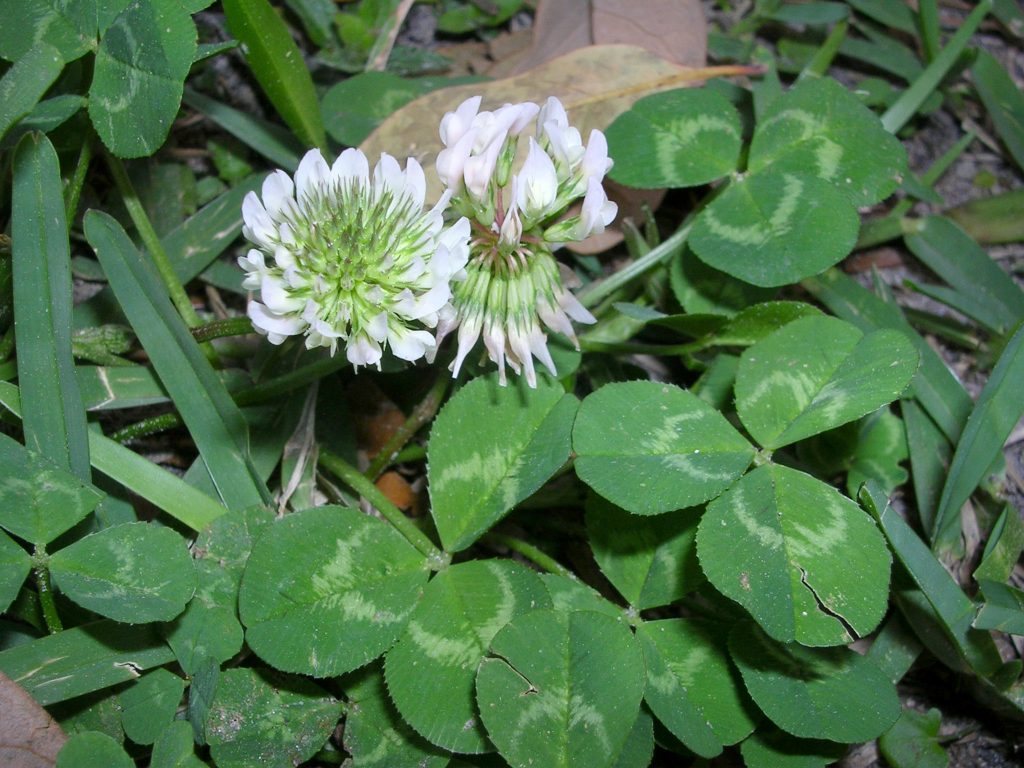 White clover, pictured, field clover and crimson clover are the three most common species in Florida. All three were introduced to Florida from Eurasia.

The shamrock – a symbol of Ireland and its patron saint St. Patrick – is likely a type of clover. Most botanists and historians think that the true shamrock is a species of clover, either Trifolium dubium or Trifolium repens. Some, however, have argued that the original shamrock was a species of wood sorrel, Oxalis, or medick, Medicago, both of which also usually have trifoliate leaves. Legend has it that St. Patrick used the shamrock as a symbol to represent the Holy Trinity. Others claim that the three leaflets represent faith, hope and love.

Fact 5: The four-leaf clover is an ancient and common symbol of good luck.

The four-leaf – technically four-leaflet – clover is a rare variation observed in several trifoliate clover species. How rare, you might ask? Well, an ambitious team of clover counters in Europe examined more than 7 million clovers in eight countries on three continents and arrived at the statistic that for every 5,076 clovers with three leaflets, there is one with four leaflets. The fourth leaflet is said to represent luck. As far back as the Middle Ages, the four-leaf clover was thought to ward off evil spirits and prevent bad luck.

Learn more about the herbarium at the Florida Museum.