While we often think of bees as fuzzy, black and yellow-striped buzzy insects that live in hives like the honey bee, the truth is more gorgeous and diverse than that! Honey bees do a lot of agricultural labor for humans and are very important to farming, but here in North America most of these domestic bees are a non-native European species, Apis mellifera.

Florida’s native bees can be found in a wide variety of sizes, colors and fuzziness. We often call them wild bees, but that doesn’t mean they’re aggressive or dangerous. Some live in social communities, while others are independent. Some species are very common, while others are rare or threatened.

1. There are many species of bees here

So how many different kinds of bees are we talking about? There are more than 4,000 species of bees that live in the United States, and Florida is home to over 300 of those species. There are 29 species that are only found here in Florida!

Some look like wasps, while others are as small as ants, so you might not even know you’re looking at a bee. And because they move around so fast, you might be challenged to identify the species you’re following from flower to flower. In fact, people who identify bees for a living often have to look at really small characteristics like their teeth (called mandibles) to identify them.

We’re used to seeing bees as fuzzy and black with yellow marking of some kind. And a lot of species stick to that general design with varying shades of yellow to gold stripes. Some look compact and sculpted for speed like expensive sports cars, while others are extra hairy like bumble bees.

Other groups look nothing like the bees we’re familiar with. Some species sport eye-catching colors. There are sweat bees that are flashy lime green or vibrant bottle green and have shiny metallic bodies. Other bees are deep turquoise to sapphire, and some range towards navy to almost midnight blue-black. 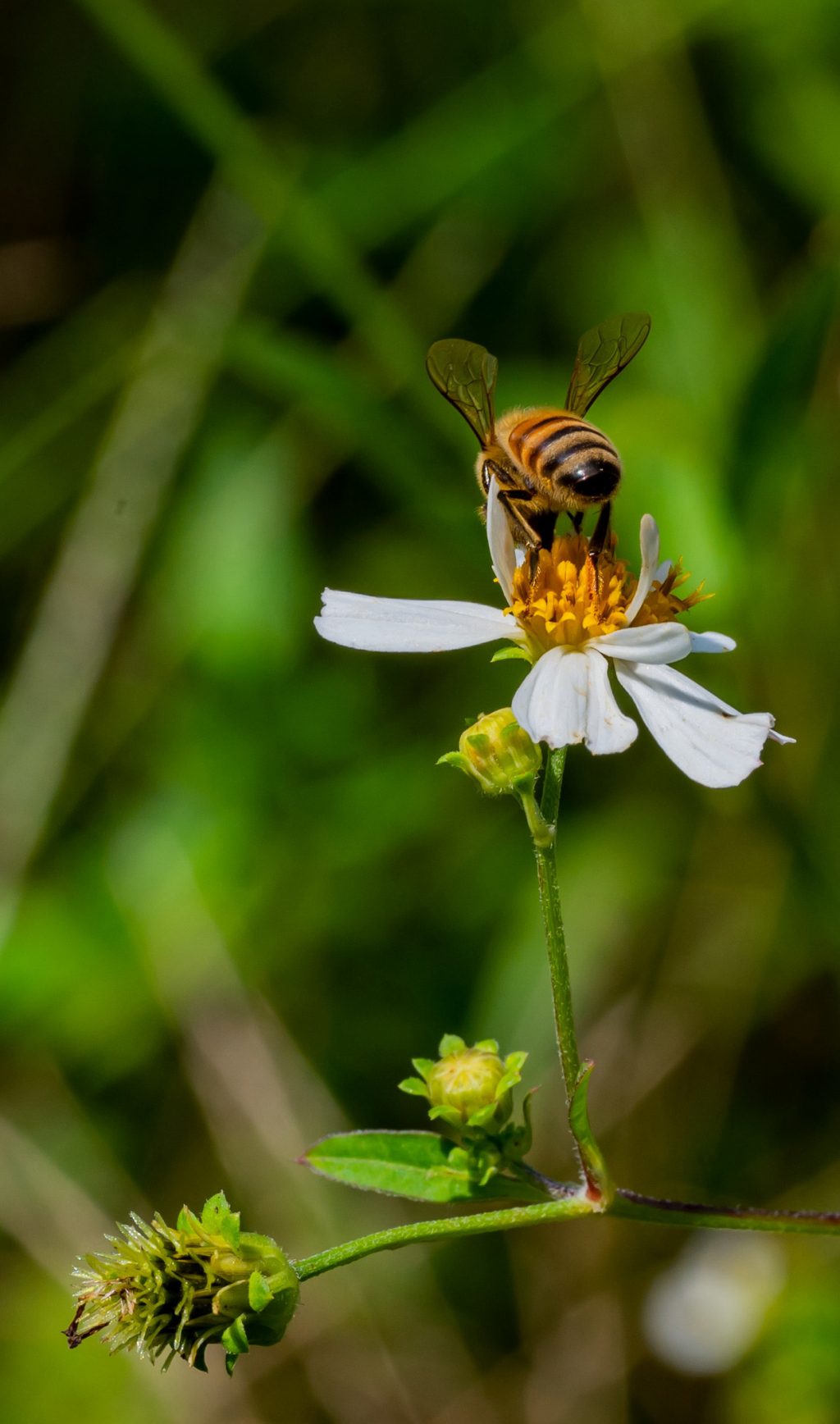 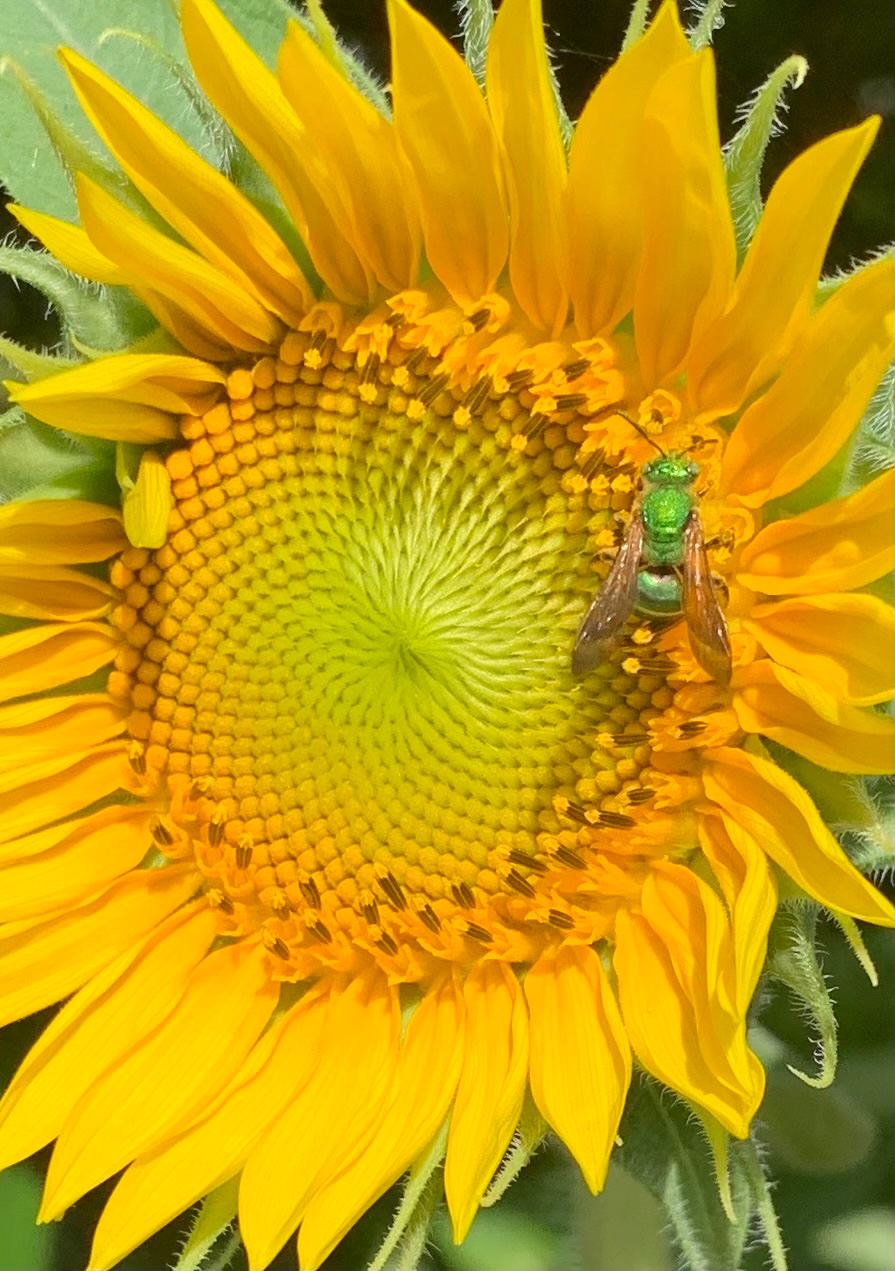 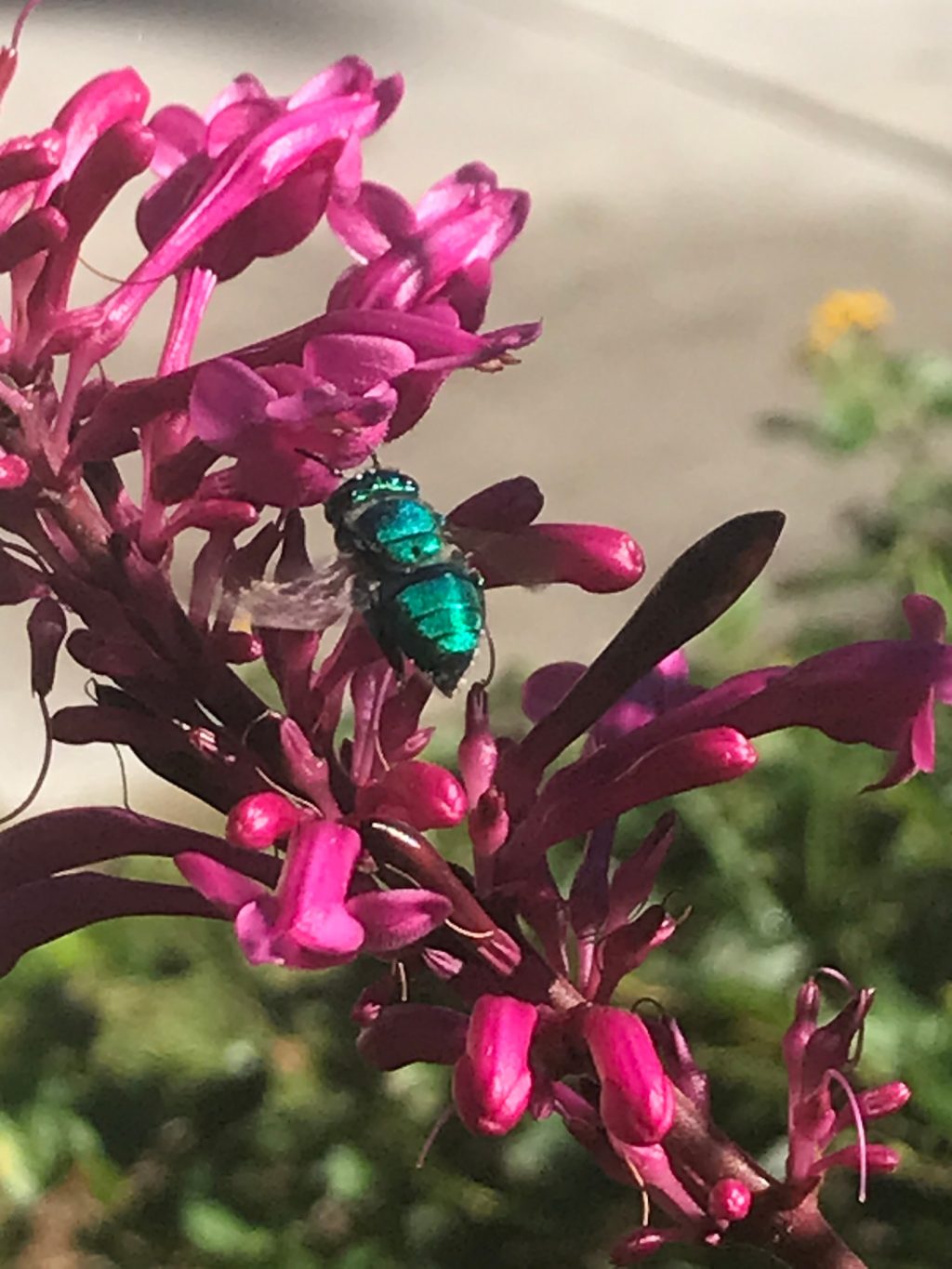 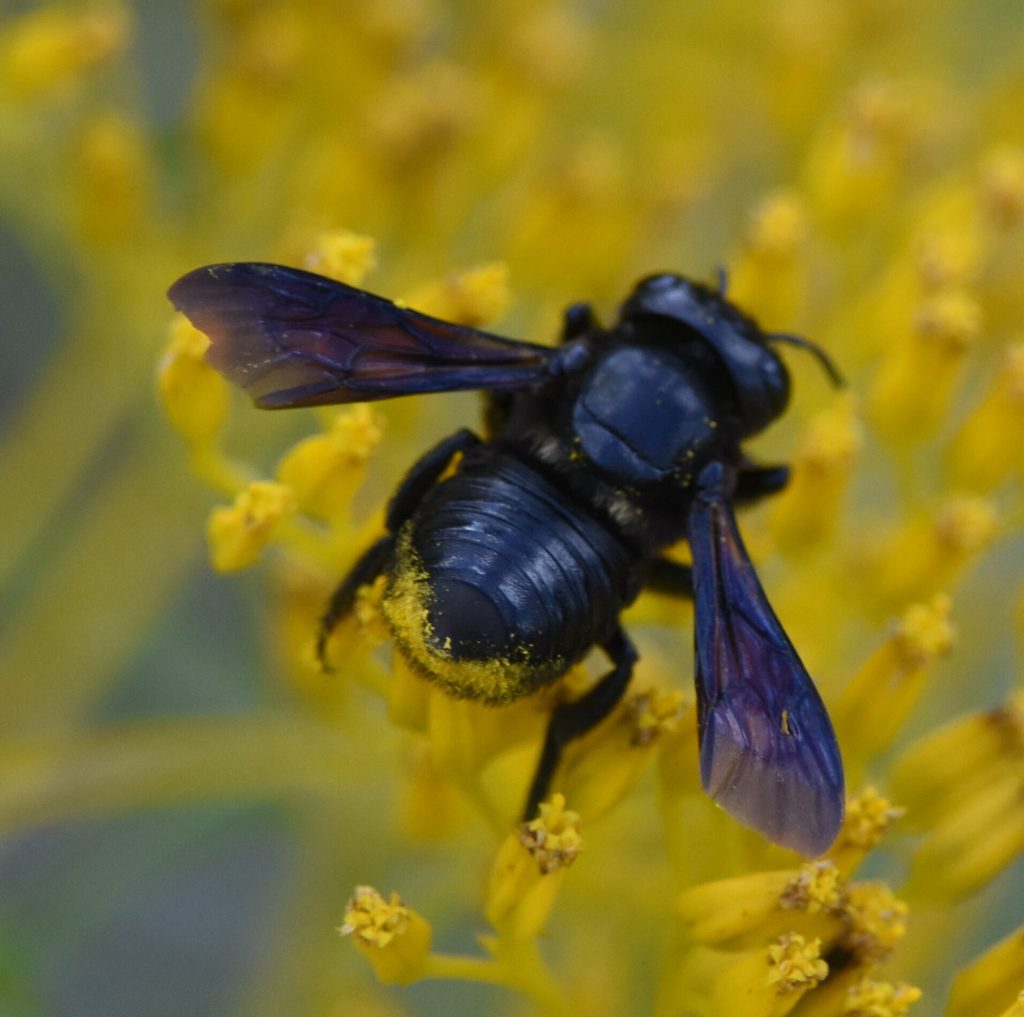 And let’s talk accessories! Long-horned bees are named for their very long antennae, while other species have sturdy, knobby-looking antennae. Some bees have noticeably more fuzzy legs, while others have thick fur on their abdomens, and some just have sparse hairs which act like a magnet for attracting the pollen they carry from flower to flower. Some bees will even collect pollen on their faces!

Most species have brown or black transparent wings, but you’ll notice some species have a colorful iridescent shimmer to theirs. Of course, that’s only if they pause long enough to let you get a good look at them! 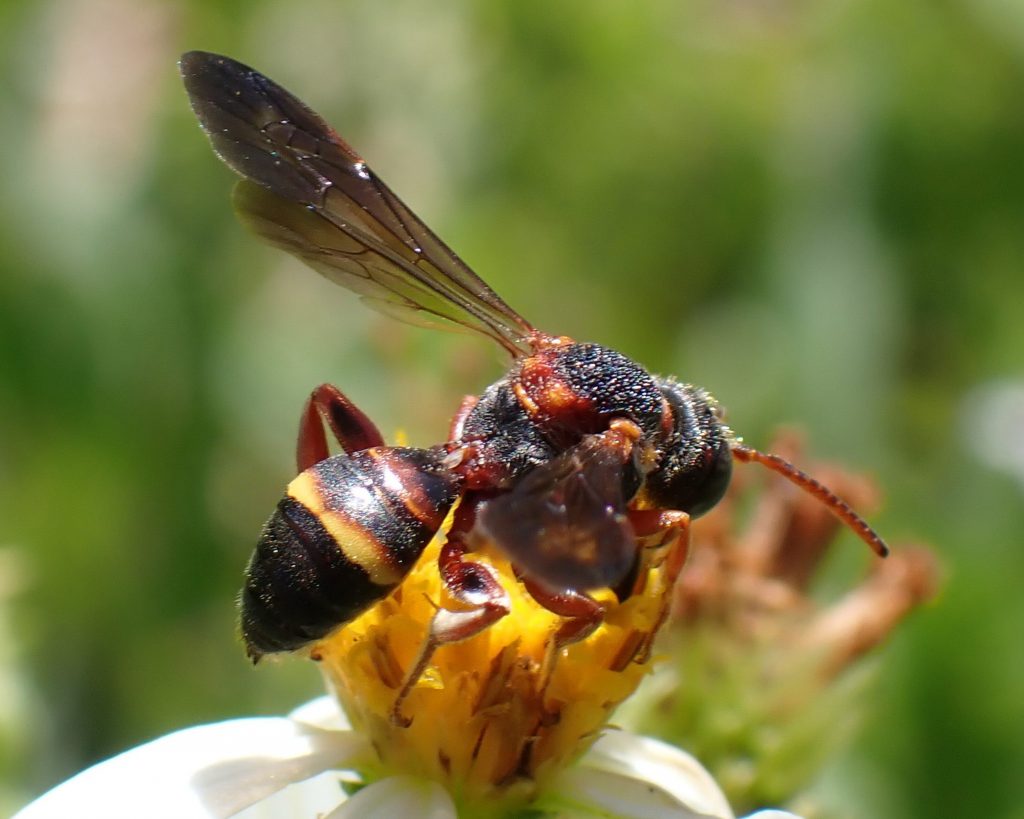 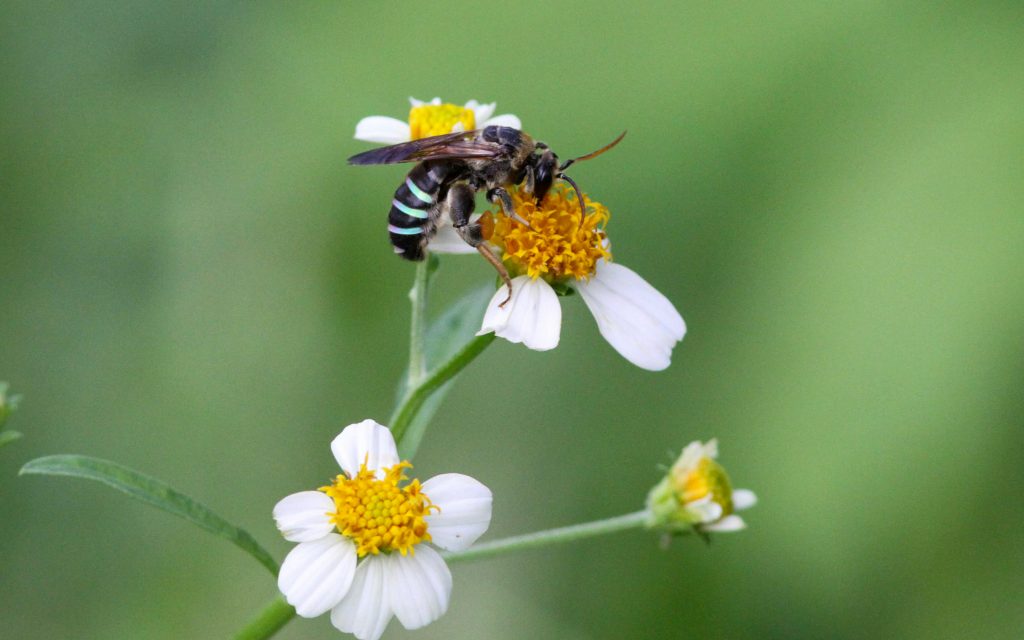 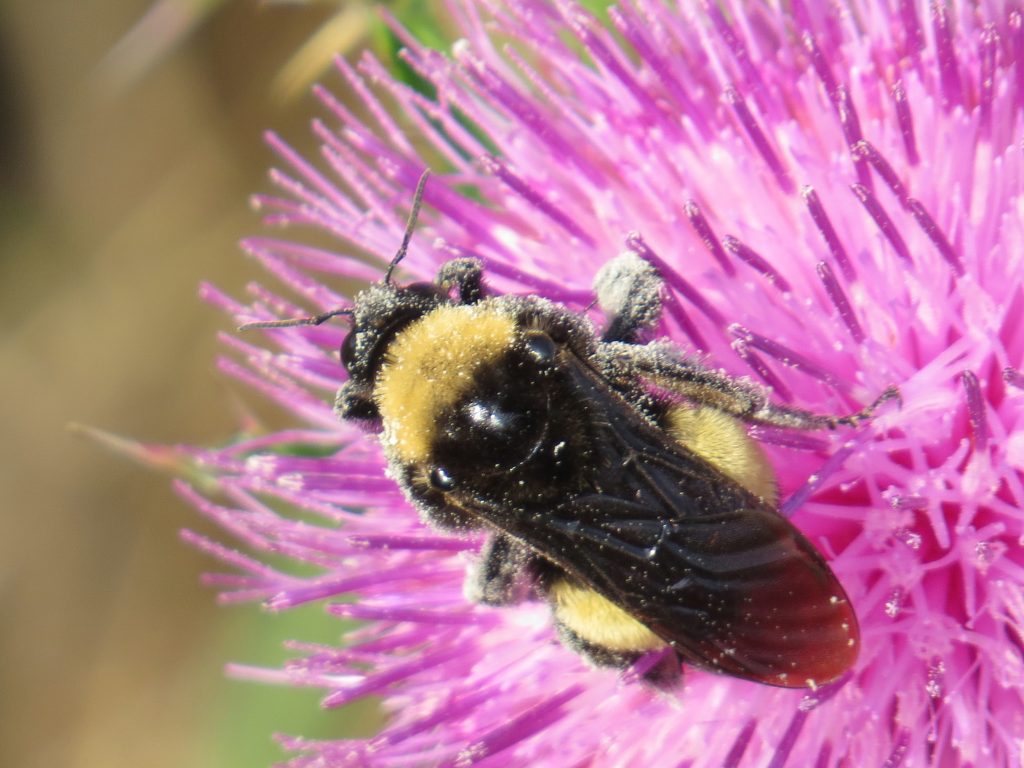 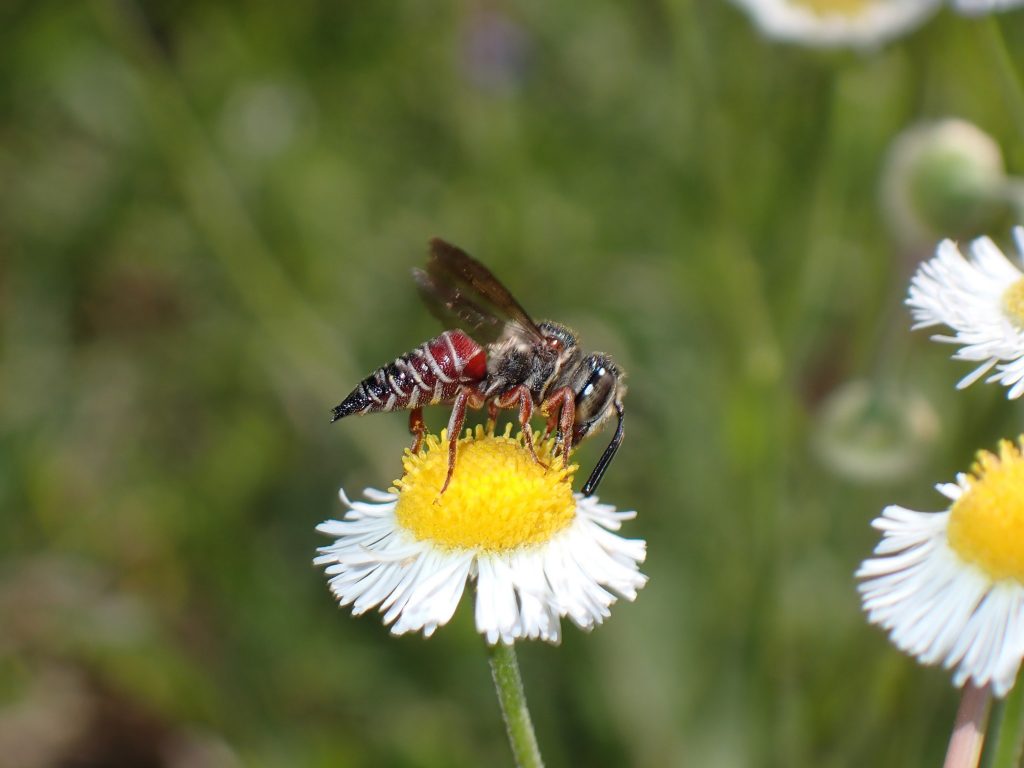 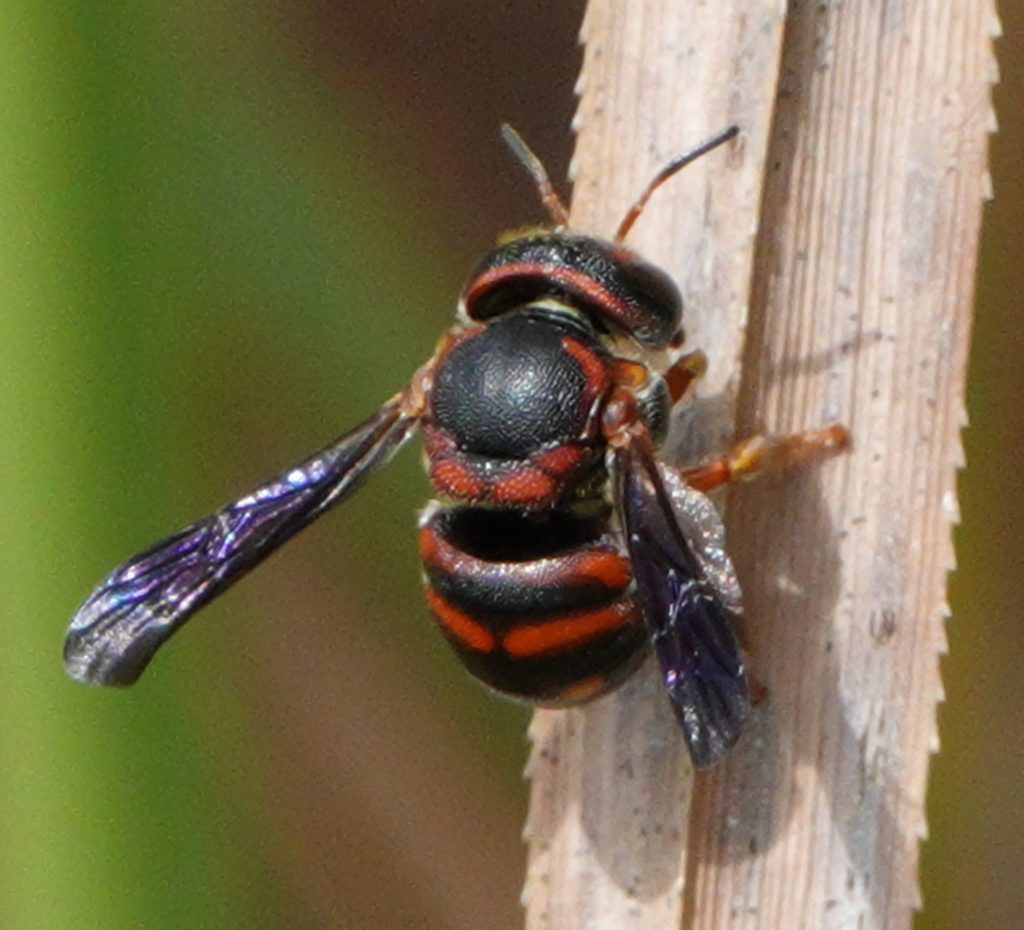 Some flowers need bees and other insects to carry pollen to other flowers, and bees rely on pollen for nutrition too, so their fuzziness or hairiness determines how they collect and transport this valuable resource.

We import and maintain hives of honeybees because they are critical for many crops. Without the hard work of these bees, we wouldn’t have much of the food we humans eat today. We like agricultural bees because we can move them to where we need them most.

Native bees are also important pollinators. Some species have direct relationships with native plants, like the blue calamintha bee, Osmia calamintha, which pollinates the flowers of Ashe’s calamint, Calamintha ashei, a threatened species in Florida.

Other species are more flexible about what types of flowers they visit. Often they are adapted to a size or shape of flower. Sweat bees are small with short tongues, so they prefer flat flowers, while big species like bumblebees can reach further into trumpet-shaped flowers for nectar. Bumble bees also are excellent buzz pollinators, meaning they can vibrate their flight muscles when visiting flowers, wafting pollen in all directions on tiny air currents. This results in a higher rate of successful pollination in certain plants.

Some Florida bee species are social and live in colonies with a queen. Others live in communities that share a space but with separate nesting chambers. Most species are not communal, and individual bees make their nests away from other bees.

Most Florida species nest in the ground by digging tunnels in the soil or sand. Others nest in existing hollow spaces like rotting wood, reed stems or holes made by other insects. And a few species like bumblebees live in colonies they’ve co-opted from previous tenants, like abandoned animal burrows or bird nests, or they might take advantage of hollow trees and even human-created spaces.

5. Florida’s bees can use your help

Like many native species, Florida’s bees are impacted by human activity such as habitat loss, non-native species and harmful chemicals. Fortunately, it’s easy to help support native bees and other pollinators by simply including more native plants in your garden and natural spaces.

With a lot of attention on shrinking global insect populations, people are working together on simple ways to support insects and reverse the decline. Making a small change in what you do around your home and in your community can have a powerful impact on the success of our native bees and other important insects. Some key things worth investigating are bug-friendly household products, better yard-mowing practices and light pollution solutions.

Scientists and conservationists are working on larger-scale projects like planting native flowers along highways, under powerlines and in other large, unused spaces to show that a little rewilding can go a long way to support pollinators.

With over 300 bee species in our state, there’s so much more to learn about them. Scientists are doubling down on research and conservation for this key group of insects. You can support this research through community science activities like posting insect observations to iNaturalist to help us better understand our bee populations.

Which blue bee is visiting my Florida landscape?