by Natalie van Hoose • March 16, 2021
These fossil bones mounted on cork belonged to a Haitian cave-rail, Nesotrochis steganinos. Collected by mammalogist Charles Woods in 1983, they are, from left, a quadrate, neck vertebra, coracoid and two toe bones. Florida Museum photo by Jeff Gage

In a genetic surprise, ancient DNA shows the closest family members of an extinct bird known as the Haitian cave-rail are not in the Americas, but Africa and the South Pacific, uncovering an unexpected link between Caribbean bird life and the Old World.

Like many animals unique to the Caribbean, cave-rails became extinct soon after people settled the islands. The last of three known West Indian species of cave-rails – flightless, chicken-sized birds – vanished within the past 1,000 years. Florida Museum of Natural History researchers sought to resolve the group’s long-debated ancestry by analyzing DNA from a fossil toe bone of the Haitian cave-rail, Nesotrochis steganinos. But they were unprepared for the results: The genus Nesotrochis is most closely related to the flufftails, flying birds that live in sub-Saharan Africa, Madagascar and New Guinea, and the adzebills, large, extinct, flightless birds native to New Zealand.

The study presents the first example of a Caribbean bird whose closest relatives live in the Old World, showcasing the power of ancient DNA to reveal a history erased by humans.

The discovery was “just mind-blowing,” said study lead author Jessica Oswald, who began the project as a postdoctoral researcher at the Florida Museum.

“If this study had not happened, we might still be under the assumption that the closest relatives of most things in the Caribbean are on the mainland in the Americas,” said Oswald, now a postdoctoral researcher at the University of Nevada, Reno and a Florida Museum research affiliate. “This gives us an understanding of the region’s biodiversity that would otherwise be obscured.” 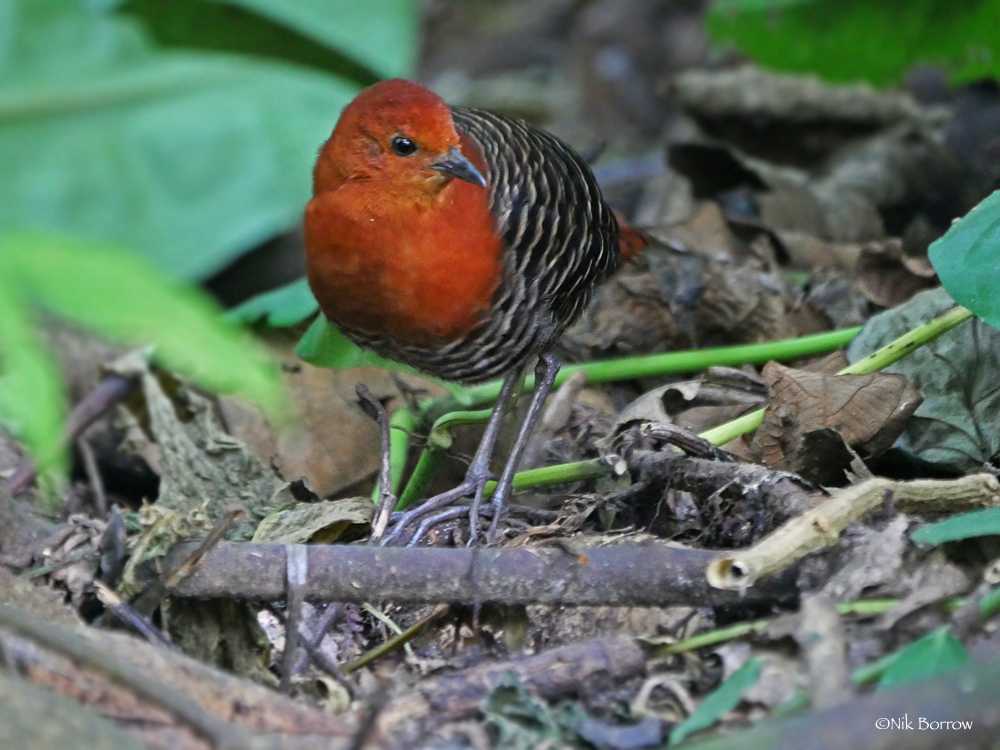 Ancient DNA shows cave-rails are not rails at all, but close relatives of flufftails, such as this Sarothrura pulchra centralis. Although they belong to separate families, flufftails resemble rails on a smaller scale. “They look like little Nerf footballs,” Jessica Oswald said. 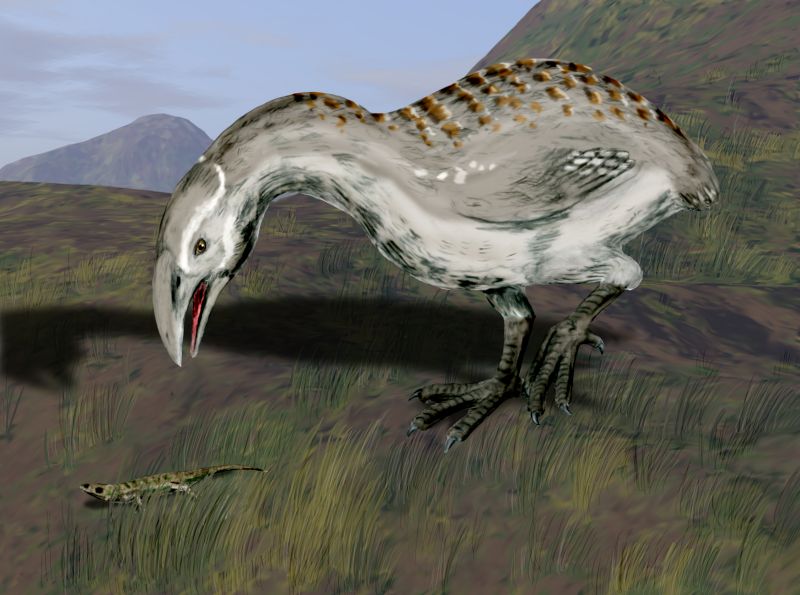 Adzebills, also close relatives of cave-rails, were large, flightless birds with big beaks that could have been used to prey on small animals or strip vegetation.

Many animals evolved unusual forms on islands, often making it difficult to classify extinct species based on their physical characteristics alone. But advancements in extracting viable DNA from fossils now enables scientists like Oswald to answer longstanding questions with ancient genetic evidence. Oswald described her work as similar to a forensic investigation, tracing the evolutionary backstory of extinct animals by piecing together fragmented, degraded genetic material.

“Understanding where all of these extinct species fit into a larger family tree or evolutionary history gives us insight into what a place looked like before people arrived,” she said. “That’s why my job is so fun. It’s always this whodunit.”

Oswald was just starting her ancient DNA work at the Florida Museum when David Steadman, curator of ornithology and study co-author, suggested the Haitian cave-rail as a good candidate for analysis.

Cave-rails share physical characteristics with several types of modern birds, and scientists have conjectured for decades whether they are most closely related to wood rails, coots or swamphens – birds that all belong to the rail family, part of a larger group known as the Gruiformes. Oswald and Steadman hoped that studying cave-rail DNA would clarify “what the heck this thing is,” Oswald said. 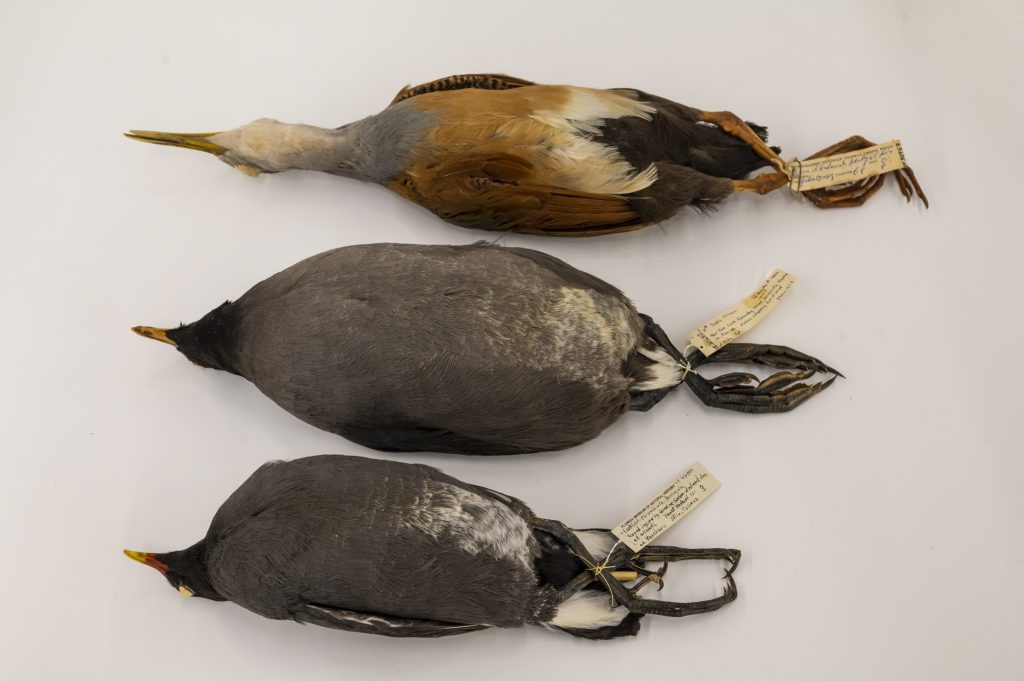 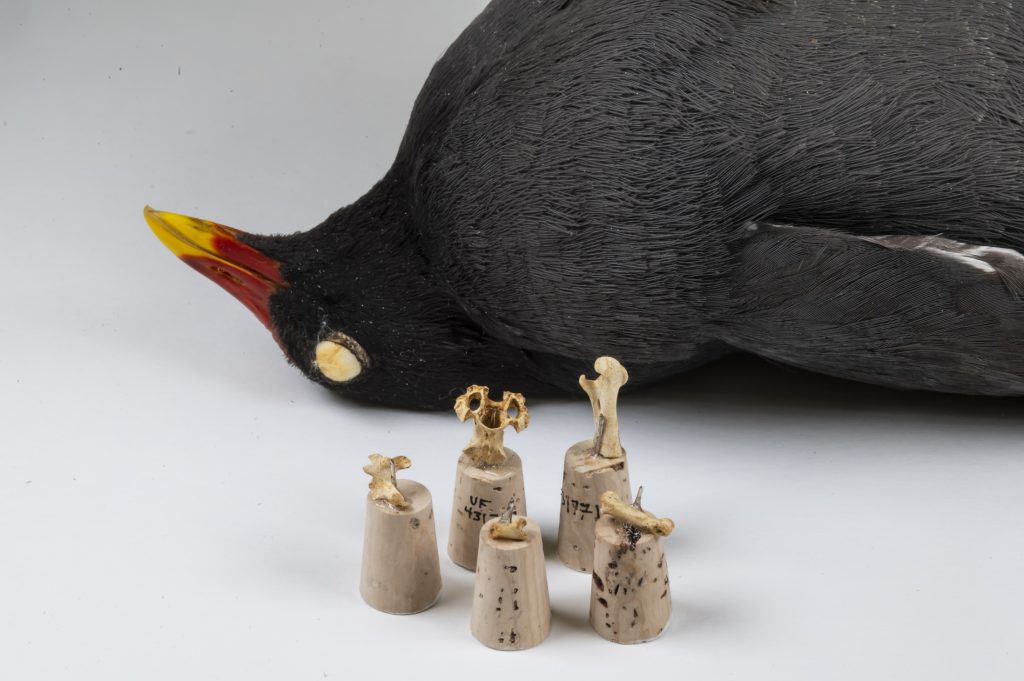 Haitian cave-rails may have resembled the common gallinule, pictured here, but their closest relatives are in the flufftail family. The fossil bones shown here belong to the same cave-rail researchers used for the ancient DNA analysis. Radiocarbon dating indicates the bird lived about 7,000 years ago. 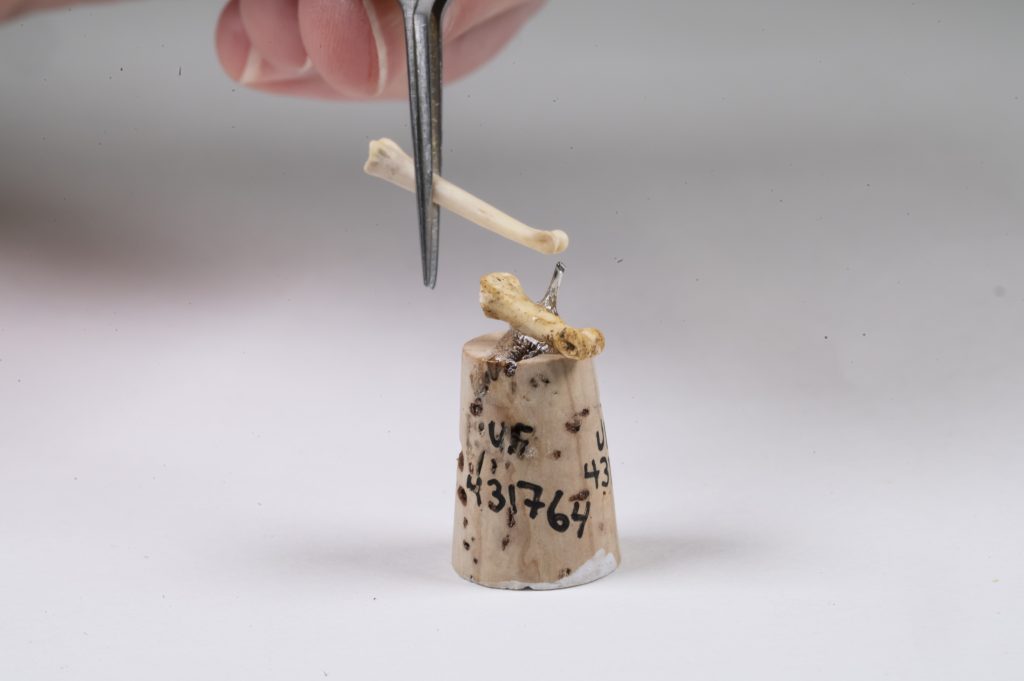 A fossil toe bone from a Haitian cave-rail, bottom, and the same bone from a purple gallinule are shown for comparison. The cave-rail’s splayed toes and short, broad feet suggest it was a slow walker.

When preliminary results indicated the species had a trans-Atlantic connection, Steadman, who has worked in the Caribbean for more than 40 years, was skeptical.

The genetics also showed that the cave-rail isn’t a rail at all: While flufftails and adzebills are also members of the Gruiformes, they are in separate families from rails.

“It just didn’t seem logical that you’d have to go across the Atlantic to find the closest relative,” Steadman said. “But the fact that people had a hard time classifying where Nesotrochis was within the rails – in hindsight, maybe that should have been a clue. Now I have a much more open mind.”

One reason the cave-rail was so difficult to classify is that when birds lose the ability to fly, they often converge on a similar body plan, Steadman said. Flightlessness is a common adaptation in island birds, which face far fewer predators in the absence of humans and invasive species such as dogs, cats, rats and pigs.

“You don’t have to outfly or outrun predators, so your flying and running abilities become reduced,” Steadman said. “Because island birds spend less energy avoiding predators, they also tend to have a lower metabolic rate and nest on the ground. It’s no longer life in the fast lane. They’re essentially living in a Corona commercial.”

While sheltered from the mass extinctions that swept the mainland, cave-rails were helpless once people touched foot on the islands, having lost their defenses and cautiousness.

“Being flightless and plump was not a great strategy during human colonization of the Caribbean,” said study co-author Robert Guralnick, Florida Museum curator of biodiversity informatics. 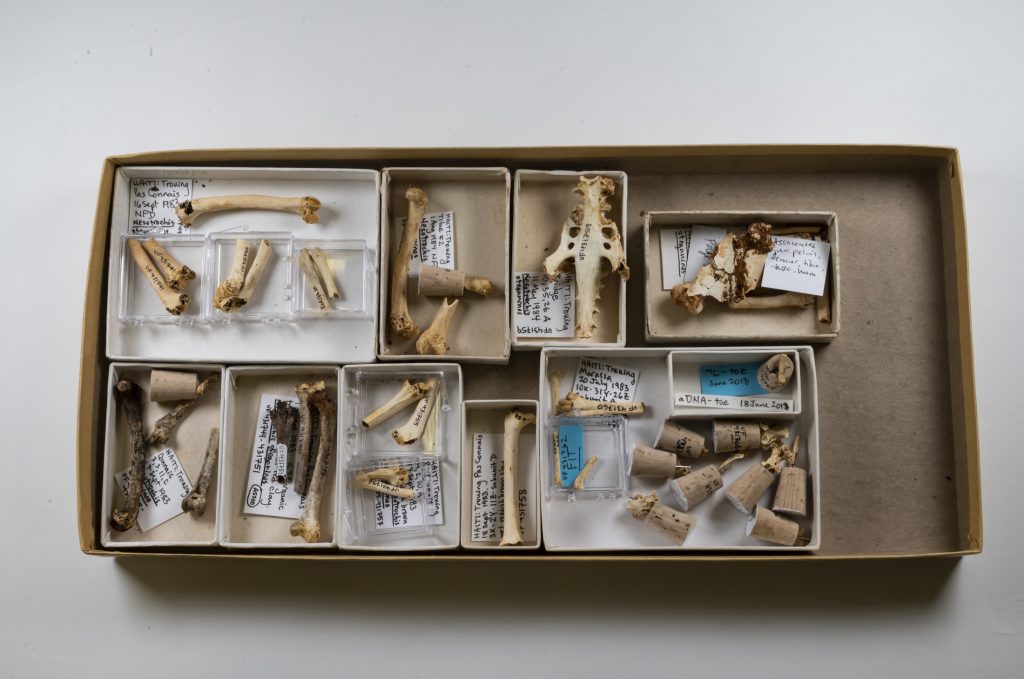 The fossil bones in this box are from several Haitian cave-rails, collected in caves. The box at bottom right contains bones from the bird used for this study’s DNA analysis and is the most complete collection of an individual Haitian cave-rail. 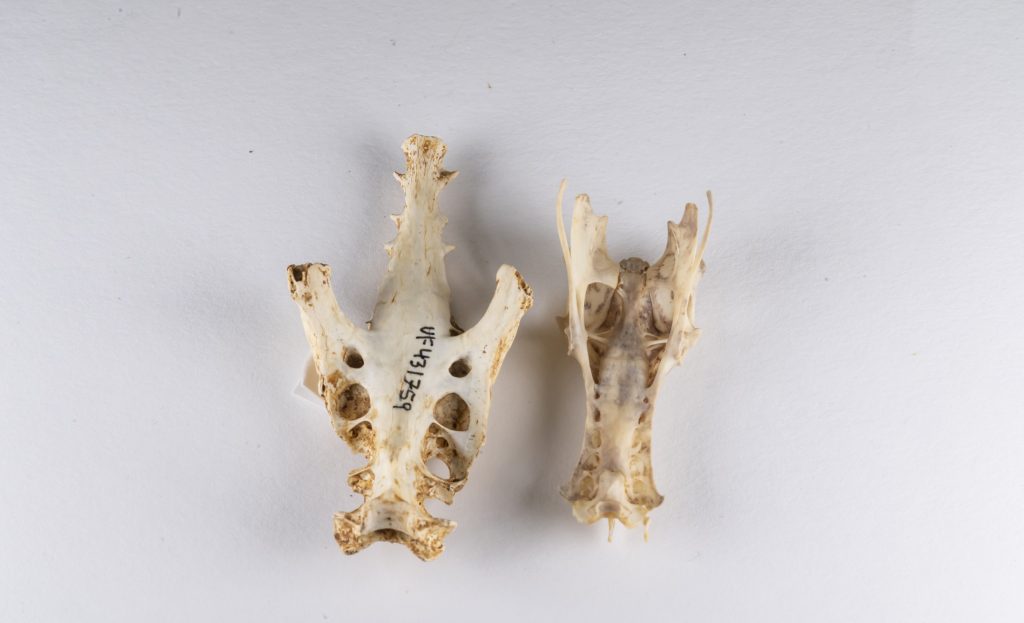 How did cave-rails get to the Caribbean in the first place? Monkeys and capybara-like rodents journeyed from Africa to the New World about 25-36 million years ago, likely by rafting, and cave-rails may also have migrated during that timespan, Steadman said. He and Oswald envision two probable scenarios: The ancestors of cave-rails either made a long-distance flight across an Atlantic Ocean that was not much narrower than today, or the group was once more widespread across the continents, with more relatives remaining to be discovered in the fossil record.

Other researchers have recently published findings that corroborate the story told by cave-rail DNA: A study of foot features suggested Nesotrochis could be more closely related to flufftails than rails, and other research showed that adzebills are close relatives of the flufftails. Like cave-rails, adzebills are also an example of a flightless island bird extinguished by human hunters.

“Humans have meddled so much in the region and caused so many extinctions, we need ancient DNA to help us sort out what’s related to what,” Oswald said.

The findings also underscore the value of museum collections, Steadman said. The toe bone Oswald used in her analysis was collected in 1983 by Charles Woods, then the Florida Museum’s curator of mammals. At that time, “nobody was thinking about ancient DNA,” Steadman said. “It shows the beauty of keeping things well curated in a museum.”

Ryan Terrill of Occidental College, the Florida Museum’s Brian Stucky and Michelle LeFebvre and Julie Allen of the University of Nevada, Reno and the University of Illinois Urbana-Champaign also co-authored the study.

The researchers published their findings in Biology Letters.

The National Science Foundation and the Florida Museum funded the research.