40 years of friendship, 70,000 specimens: Amateur entomologists donate lifetimes’ worth of butterflies and moths

As a 4-year-old, butterfly net in hand, Ed Knudson set out to catch insects in his neighborhood. Little did he know his hobby would grow into a lifelong pursuit that would result in a collection of more than 70,000 butterflies and moths.

Now, 65 years after his first collecting trip, Knudson and his close friend and collaborator Charles Bordelon have donated their lives’ work, the Texas Lepidoptera Survey Research Collection, to the McGuire Center for Lepidoptera and Biodiversity at the Florida Museum of Natural History.

While many collectors focus on a handful of Lepidoptera families, Knudson and Bordelon amassed a collection of unusual taxonomic depth, with a variety of species from the large and flashy to the tiny and understudied.

“To have a collection that’s got big showy butterflies and the micromoths is unprecedented,” said Andrew Warren, the senior collections manager of the McGuire Center on the University of Florida campus. “There’s no other collection like it. We value it for its incredible scientific value, and it’s above and beyond what most collections consist of.”

“Charles and I had originally wanted the collection to remain in Texas, but we could not find a place that it would likely be used for research,” Knudson said. “The McGuire Center had the things that we wanted and people who could work on the collection.” 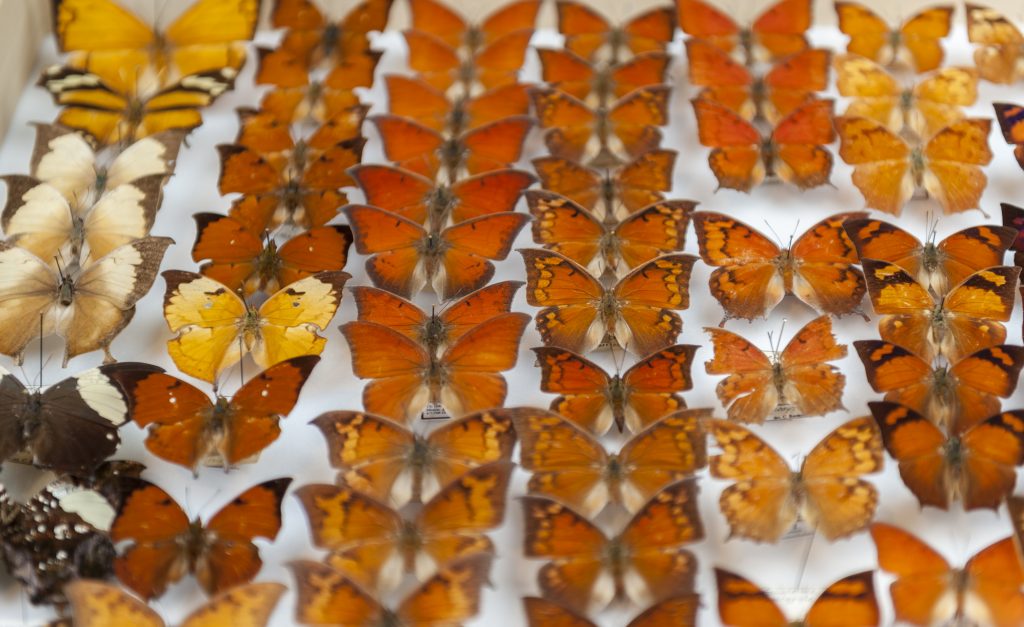 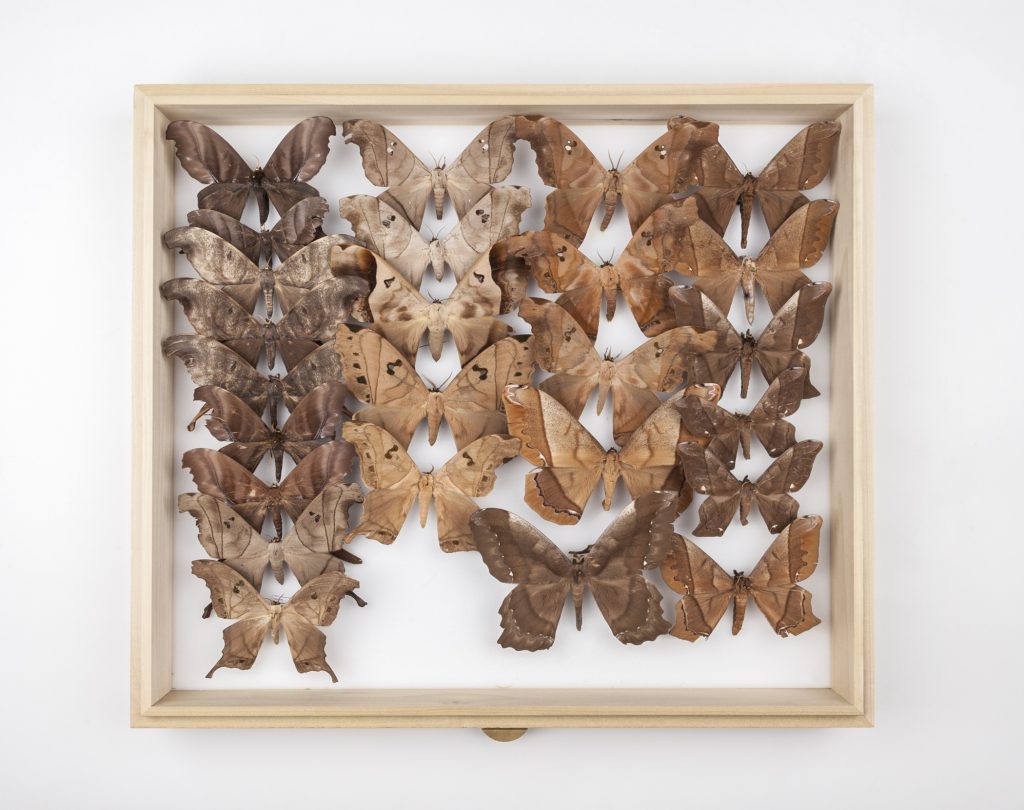 This collection of Latin American silk moths belong to the subfamily Arsenurinae, part of the family of Saturniidae. 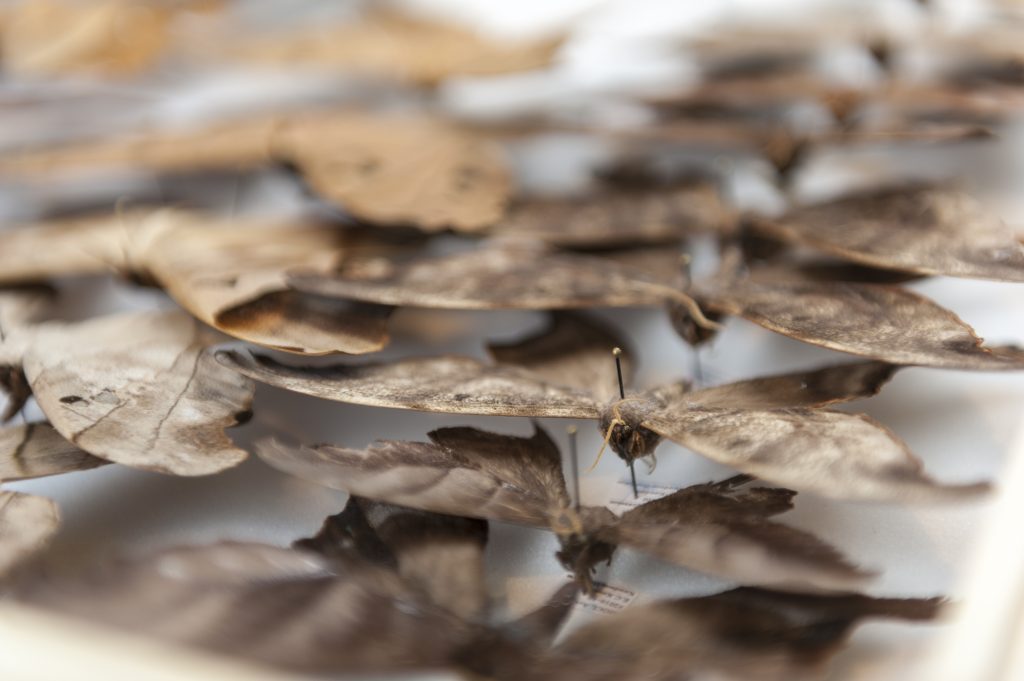 These silk moths’ range runs from Mexico to Argentina. 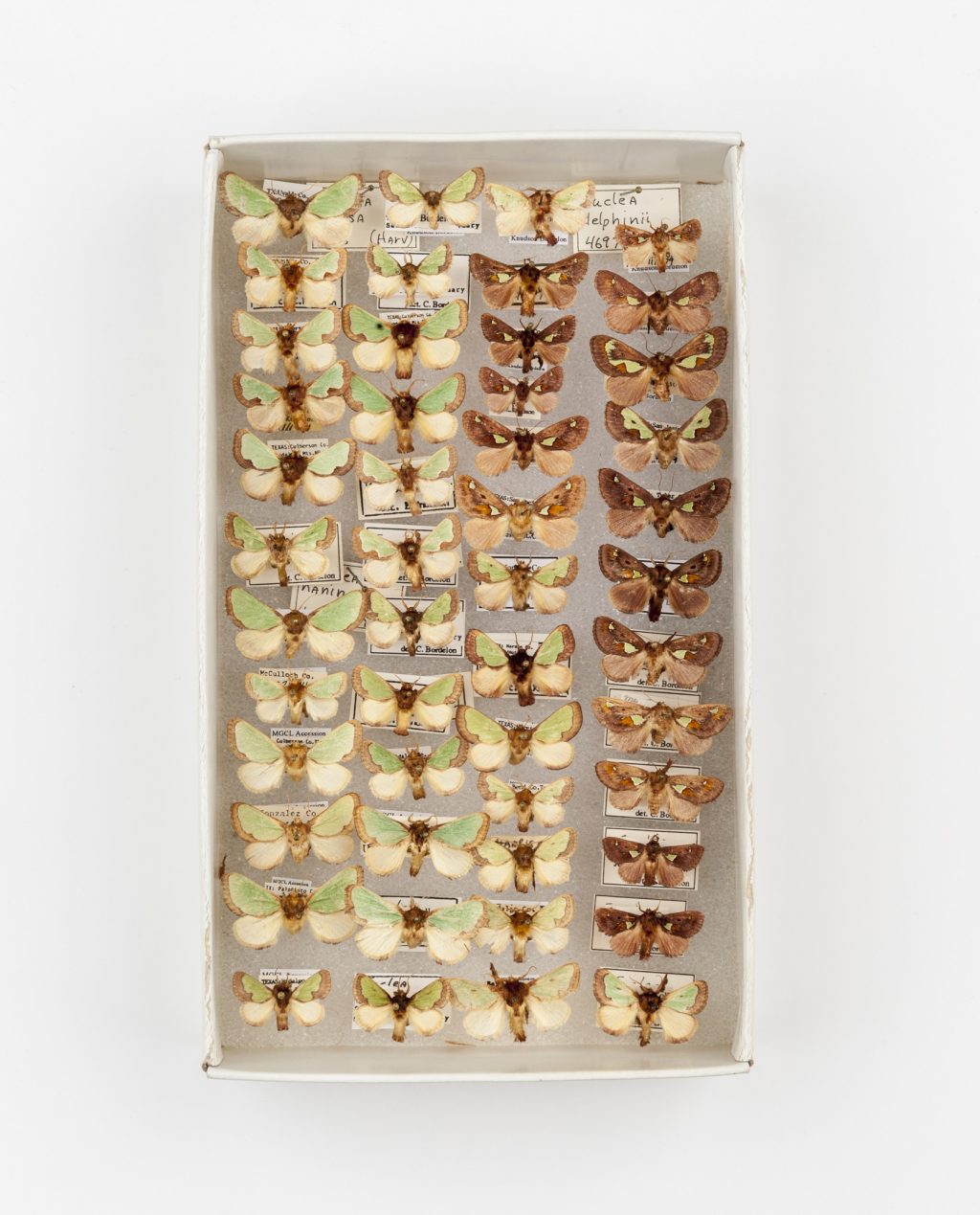 These slug moths belong to the Limacodidae family. 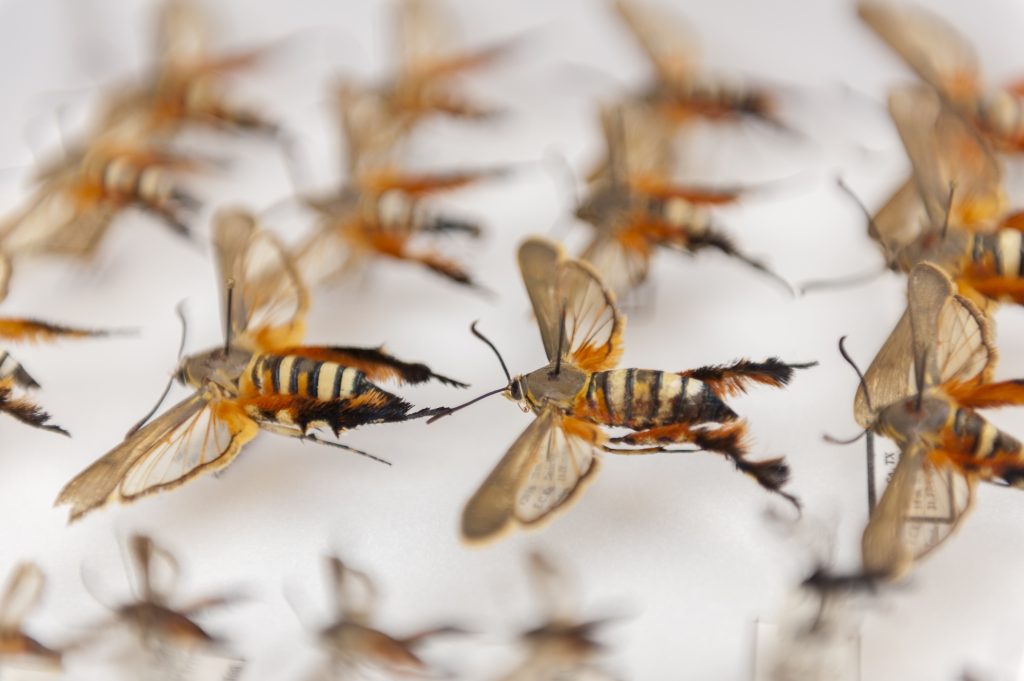 Clearwing moths, in the family Sesiidae, are wasp mimics. The caterpillars bore holes in trees and some are pests in orchards. 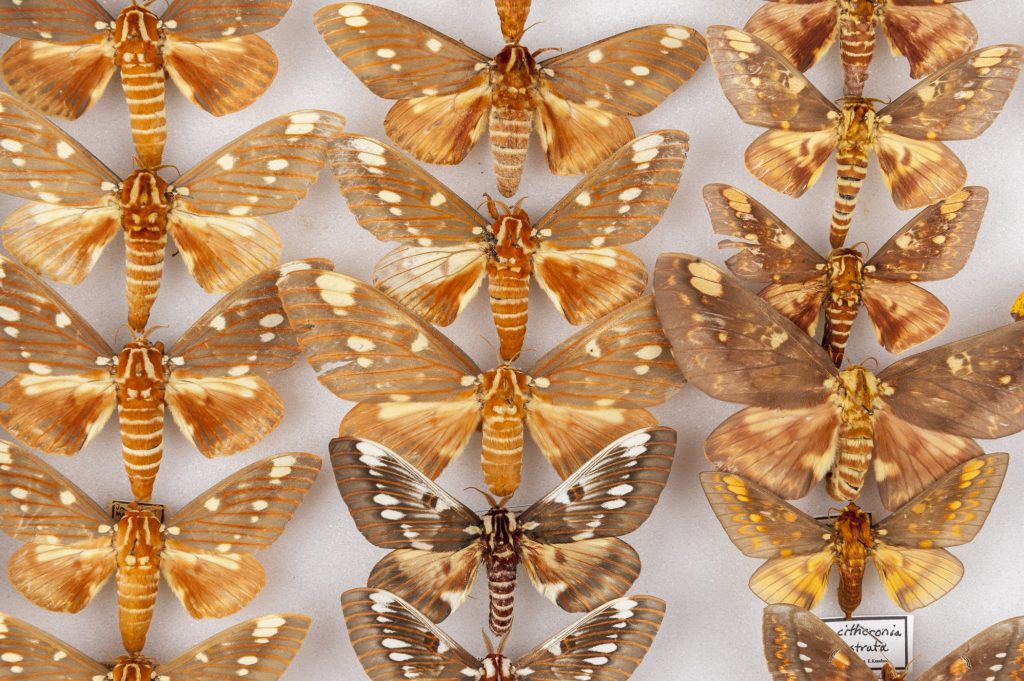 These imperial moths are from the genus Citheronia in the Saturniidae family. As caterpillars, they are known as horned devils because of their long curved spines.

The friendship between Knudson and Bordelon began in 1977 when they met at Tyler State Park in Texas while on a collecting trip. However, the two did not meet again until 1984 when Knudson, then head of the Lepidopterists’ Society Season Summary database, reached out to Bordelon.

“I received reports from Charles that were so interesting that I had to meet him again,” Knudson said.

The two clicked immediately, and they soon became close friends as they worked on the collection together. They traveled throughout Texas, New Mexico, Arizona and Ecuador, and they lived together for a few years in Houston.

“Charles and I had similar tastes in music, which were mainly ‘60s and ‘70s rock, games, mainly Scrabble and pool, and we both loved the outdoors,” Knudson said. “We both loved the Dallas Cowboys as well.”

The collection is a combination of Bordelon and Knudson’s individual collections, along with smaller collections donated to them throughout the years. When McGuire researchers came to Knudson’s house to pick up the specimens, they needed a 16-foot U-Haul truck to transport them all. 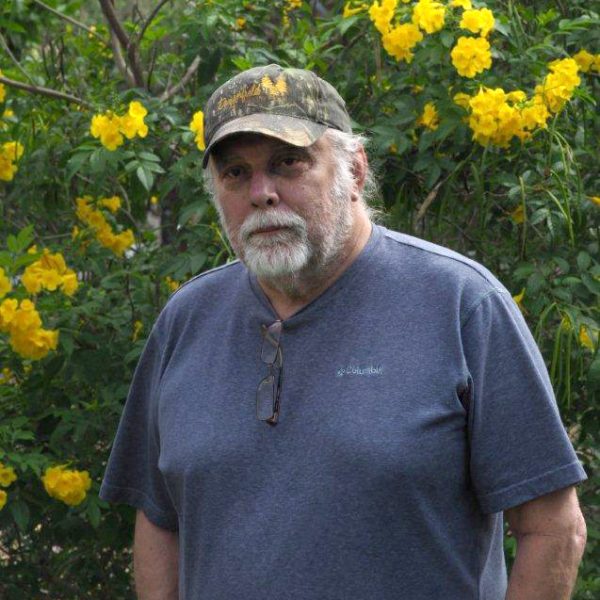 Ed Knudson graduated from the University of Florida College of Medicine in 1973 and later became a radiologist, but he never lost his passion for collecting insects. 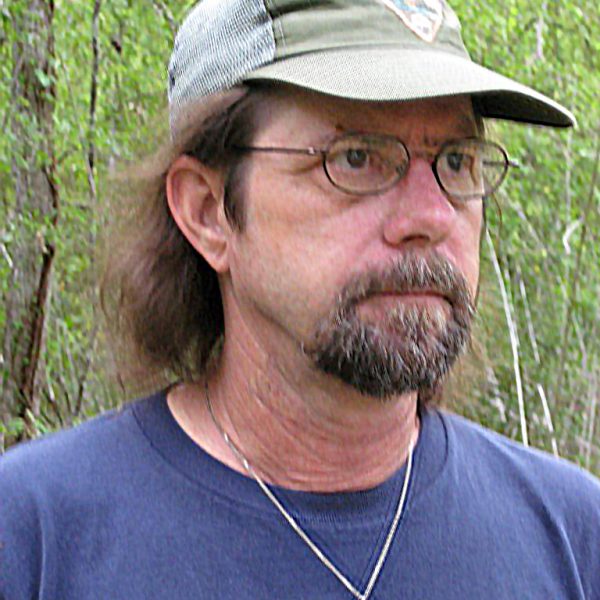 Charles Bordelon worked various jobs throughout his life and, until his death in 2016, helped Knudson manage their collection.

“Both Charles and I traded specimens, and I occasionally purchased specimens from dealers,” Knudson said. “Thousands of collecting hours were spent in the field by us as well.”

But despite countless hours of field work and an incredible collection to show for their labors, neither Knudson nor Bordelon were professional entomologists. Bordelon worked various jobs throughout his life, and Knudson is a radiologist, graduating from the University of Florida College of Medicine in 1973.

“I chose radiology as a specialty in medicine because it is so interesting,” Knudson said. “It is like trying to solve a mystery with clues in the images, such as MRI or CT examinations. Entomology I also have as an avocation, but not an occupation.”

Andrei Sourakov, the collections coordinator at the McGuire Center, said Knudson and Bordelon’s collection is a perfect example of how amateur scientists can greatly help professionals.

“These days, everybody talks about citizen science as if it is some new thing without realizing that lepidopterists’ societies and lepidopterology have been thriving on citizen science for three centuries,” he said.

Big butterflies, micromoths and everything in between

Warren said many lepidopterists will focus on particular groups of butterflies or moths, but Knudson and Bordelon collected them all, even down to micromoths, tiny insects with a wingspan typically smaller than a dime and sometimes not much bigger than a pinhead. These smaller species are frequently overlooked by collectors, which is one reason this collection is so impressive, Warren said.

Researchers at the McGuire Center or visiting scientists often have to verify donated specimens are correctly identified and sorted taxonomically. With 160,000 described Lepidoptera species and more than 120 families, this is a difficult and time-consuming task. But Knudson and Bordelon handed over a collection in which nearly every specimen was correctly sorted by taxonomy.

“It’s incredibly well organized, and everything is identified to species, which is also unusual,” Warren said. 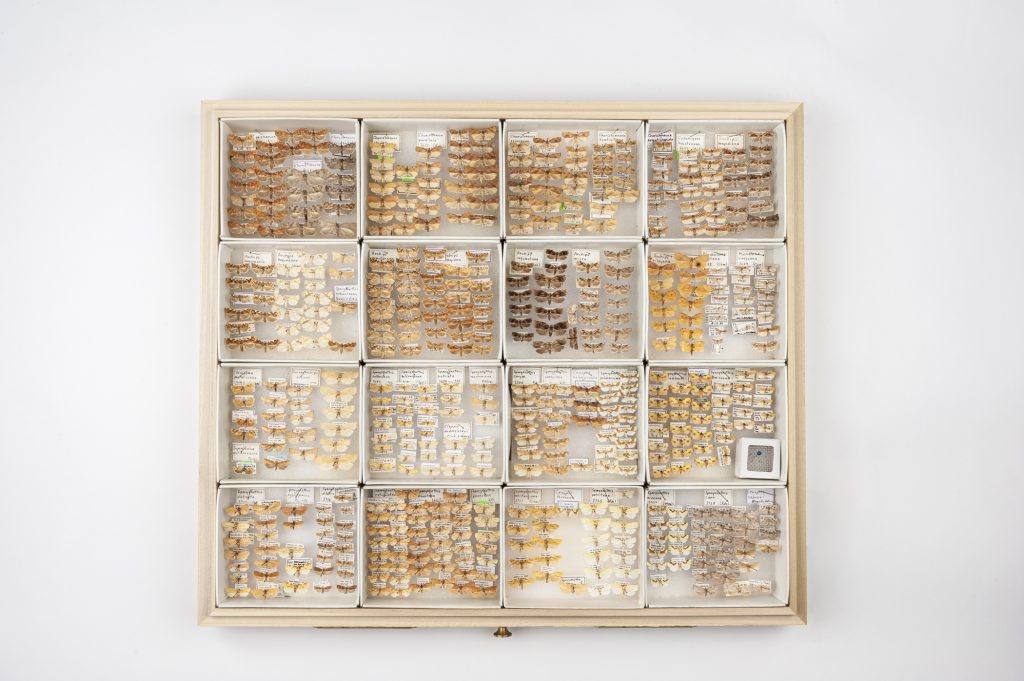 Micromoths frequently have economic, as well as scientific, importance because many emerging pests come from this category of Lepidoptera. 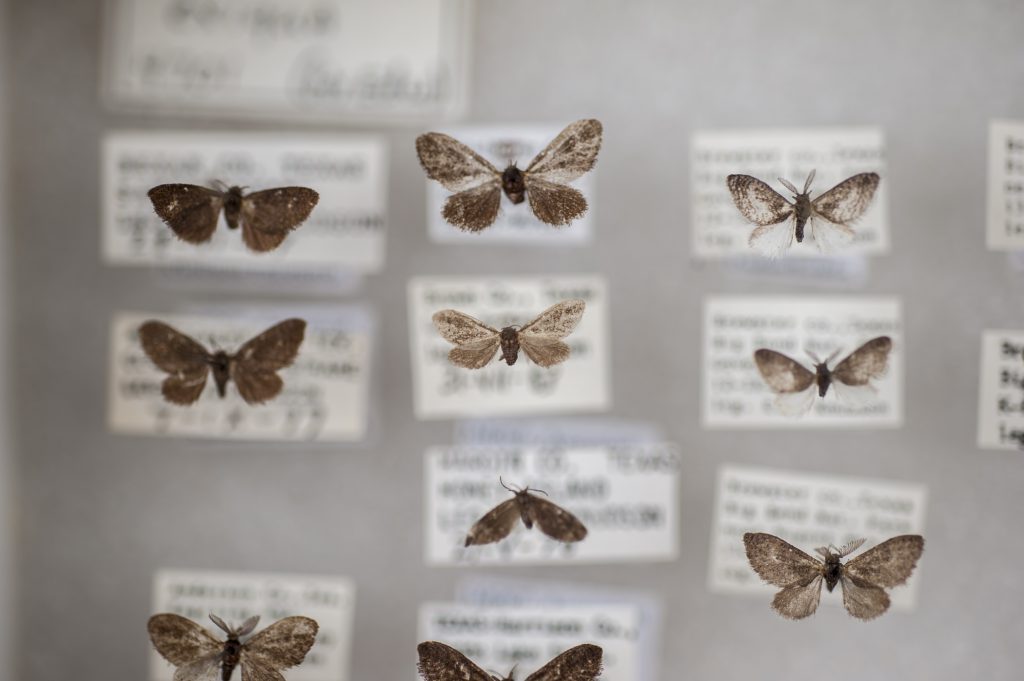 Efficiently managing pest species starts with correctly identifying and describing them. This process often begins with collections such as the one created by Knudson and Bordelon. 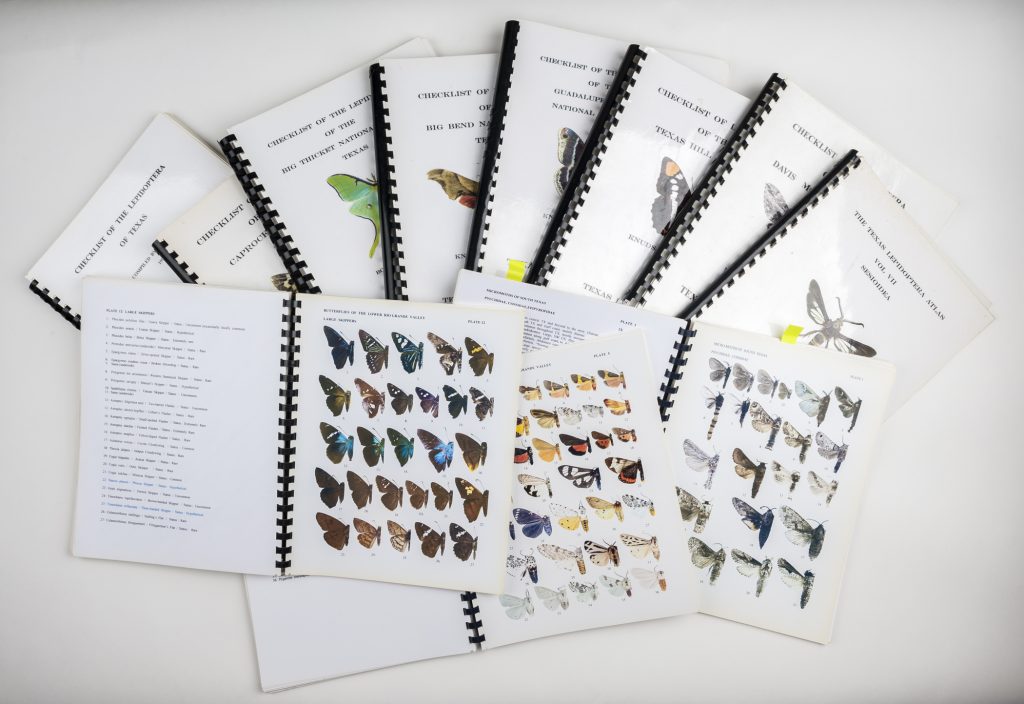 Knudson and Bordelon self-published several illustrated books describing the Texas Lepidoptera Survey, which they donated with the collection.

Along with the specimens and glass-topped drawers in which they were stored, Knudson also included several self-published, meticulously illustrated books encompassing the results of the Texas Lepidoptera Survey.

“That’s the only documentation of where these things are in Texas for the most part, and they’re illustrated volumes,” Warren said. “All of those specimens in the volumes are now in the collection.”

The collection has served as the basis for more than 60 scientific publications, and the holotypes of the species described in these publications – specimens that represent a species – are also included with the donation. Holotypes are crucial for taxonomic work, Sourakov said.

Thomas Emmel, founding director of the McGuire Center, said another reason the collection is so valuable is that it also includes species from Mexico. Because national borders do not apply to wildlife, this breadth of representation allows researchers to better understand the fauna of the region as a whole, particularly as climate change extends the distribution of many species northward.

Knudson is still collecting but at a slower pace. After 65 years of collecting, what’s left on his wish list?

“I wanted to get a specimen of the rare sphinx moth, Adhemarius blanchardorum, from Big Bend but never managed to find it,” he said. “However, someone who was authorized to collect there gave me a specimen, and it is now in Gainesville. Otherwise, I would really like to find something that is new that I have never seen before.”

Reminiscing on past specimens, Knudson said his best catch was the Megathymus ursus – a giant skipper – in Big Bend National Park in Texas. He also said Bordelon’s best catches included two highly unusual finds for the U.S. He nabbed a female Historis odius dious – an orange and black butterfly usually found in Latin America – at an Alamo Inn in Alamo, Texas, and a male Hypolimnas misippus – a mimetic butterfly from the West Indies – in Sabal Palm Sanctuary in Brownsville, Texas.

“Charles missed the Hypolimnas misippus that was attracted to bait because it flies very fast and he was using somewhat unwieldy long net, and he came back to where I was in despair,” Knudson said. “I told him that it would probably come back, and it did! This time he got it and began screaming at the top of his lungs, and soon the complex manager came over to see what had happened.” 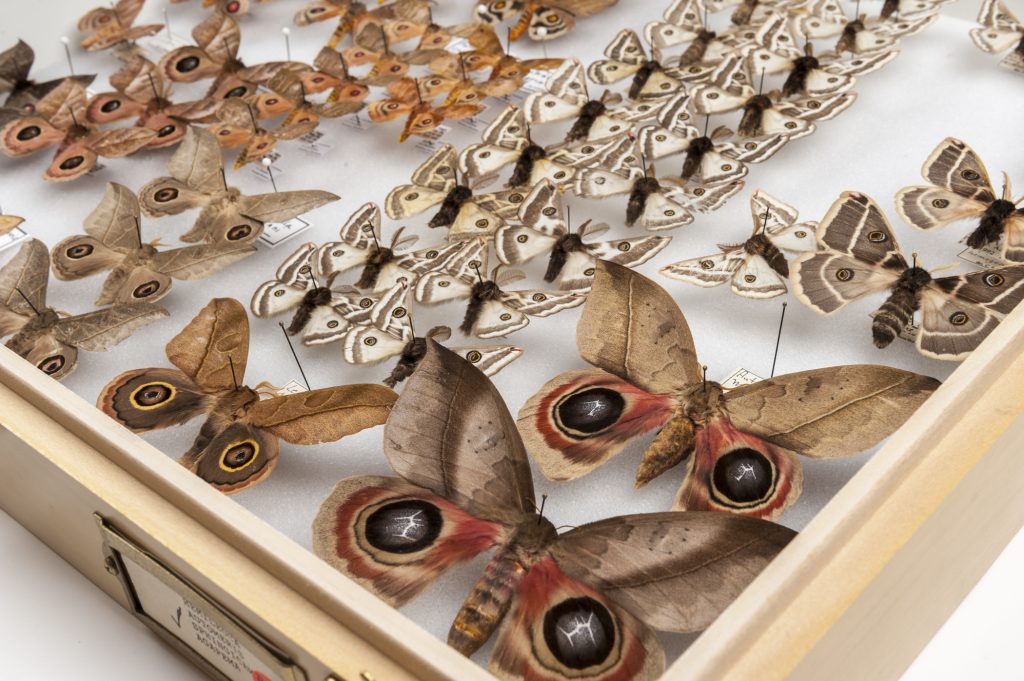 Silk moths often feature prominent eyespot on their hindwings, a defense mechanism. The genus Automeris, represented by the specimens at the bottom right, offers a prime example of these patterns. 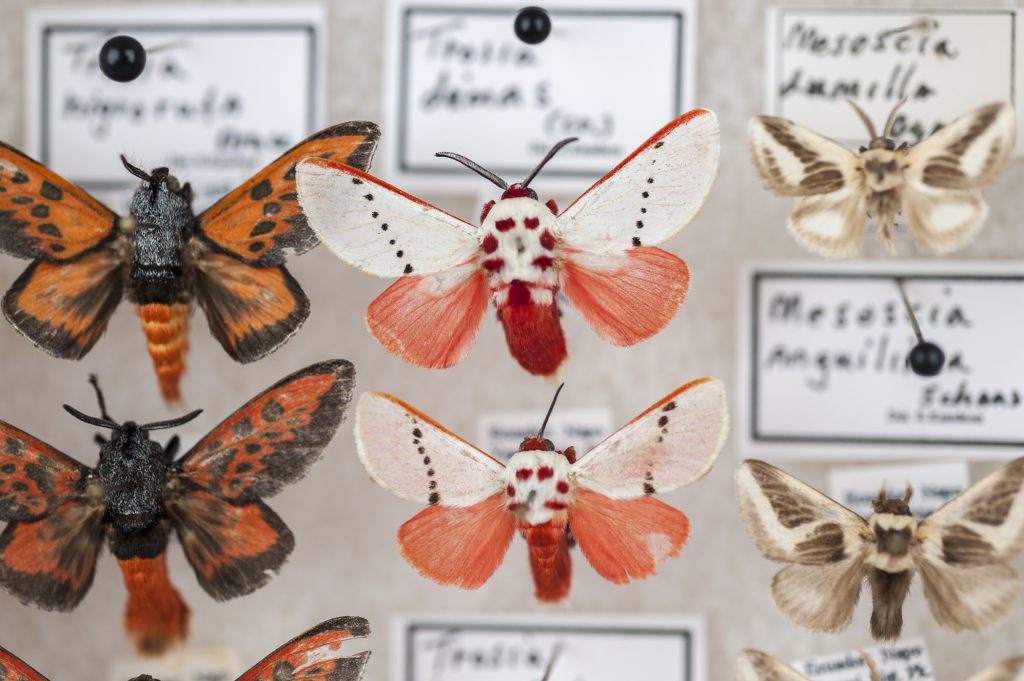 The McGuire Center’s collections are global in scope. These moths, collected by Knudson and Bordelon in Ecuador, will serve generations of students and researchers from around the world who come to study the collections.

Knudson said he is happy to see the fruit of his and Bordelon’s work is helping others learn about Lepidoptera. Many of the described species in the collection are only found in Texas, and some of the specimens will undoubtedly represent species that are new to science, Sourakov said. Receiving this collection will allow the McGuire Center to research these specimens and improve our knowledge about butterflies and moths from this region.

“I can only say that people, especially children, seeing this collection and the statements about it will be encouraged to work on insects and other arthropods,” Knudson said.

Emmel echoed these sentiments and said he hopes others will be able to learn from the collection for a long time.

“These Lepidoptera specimens will be here for future generations to marvel at and wonder why we didn’t preserve more of their habitat.”

To see additional examples from Knudson/Bordelon collection, to access the Checklist of Texas Lepidoptera and to browse publications resulting from this collection, visit: https://www.floridamuseum.ufl.edu/mcguire/collection/featured-collections/knudson-bordelon/

Learn more about the McGuire Center for Lepidoptera & Biodiversity.

Learn more about the Knudson/Bordelon Collection.