The drill holes left in fossil shells by hunters such as snails and slugs show marine predators have grown steadily bigger and more powerful over time but stuck to picking off small prey, rather than using their added heft to pursue larger quarry, new research shows.

The study, published today in Science, found the percent of shell area drilled by predators increased 67-fold over the past 500 million years, suggesting that the ratio of predatory driller size and tough-shelled prey increased substantially. The study’s authors say the widening gap could be caused by greater numbers and better nutritional value of prey species and perhaps to minimize predators’ vulnerability to their own enemies.

“These drill holes track the rise of bullies: bigger, stronger predators hunting the same size prey their much smaller predecessors did,” said Michal Kowalewski, the Jon L. and Beverly A. Thompson Chair of Invertebrate Paleontology at the Florida Museum of Natural History at the University of Florida and a study co-author. “What’s exciting about this project is that we found a drilled fossil shell can tell us both the size of the prey and the size of the predator that ate it. This gives us the first glimpse into how the size of predators and prey are related to each other and how this size relation changed through the history of life.”

Predation is a major ecological process in modern ecosystems, but its role in shaping animal evolution has been contentious, Kowalewski said. This study sheds light on predation’s ability to drive evolutionary changes by supporting a critical tenet of the escalation hypothesis: the idea that top-down pressure from increasingly larger and stronger predators helped trigger key evolutionary developments in prey species such as defensive armor, better mobility and stealth tactics like burrowing into the sea floor.

Other than a few rare finds of predator and prey preserved mid-battle, a lack of direct fossil evidence has hindered a clearer understanding of how predators have influenced other species’ evolutionary paths.

Adiel Klompmaker, then a postdoctoral researcher at the Florida Museum, was working on a database of drill holes—the marks left in a shell by a predator such as a snail or slug—when he saw their untapped potential as “smoking gun” evidence of deadly saltwater dramas.

Drilling predators such as snails, slugs, octopuses and beetles penetrate their prey’s protective skeleton and eat the soft flesh inside, leaving behind a telltale hole in the shell. Trillions of these drill holes exist in the fossil record, providing valuable information about predation over millions of years. But while drill holes have been used extensively to explore questions about the intensity of predation, Klompmaker realized they could also shed light on predator-prey size ratios.

Just as a bullet hole indicates the caliber of gun fired, a drill hole points to the size of the predator that created it—regardless of what kind of animal it was. By compiling these hole sizes, researchers can gain insights into 500 million years of predator-prey interactions.

“Finding direct evidence of behavior in the fossil record can be difficult, certainly in comparison to all animal behavior we can simply observe today,” said Klompmaker, the study’s lead author and now a postdoctoral researcher at the University of California, Berkeley, where he conducted most of the research. “Drill holes in shells are an exception to this rule.”

To determine whether drill hole size is a good predictor of the size of the animal that made it, the researchers compiled 556 measurements of predator sizes and the diameter of the holes they produced. The measurements spanned 14 families and five phyla of drillers, both terrestrial and marine: mollusks, arthropods, nematodes, Cercozoa (parasitic protists) and Foraminifera (amoeboid protists). The team found a strong correlation between predator size and the diameter of drill holes.

“It’s similar to how the size of your arm is related to your height and overall body mass,” Kowalewski said. “It’s not a perfect correlation, but there is a very strong relation between the two.” 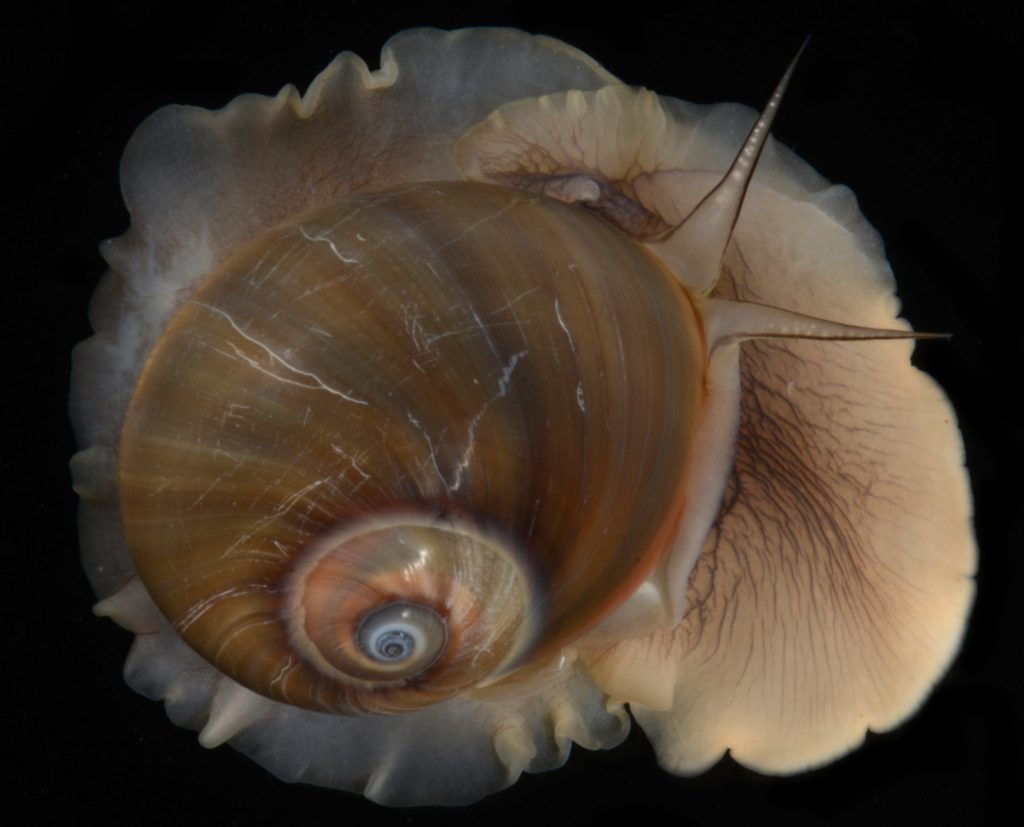 Moon snails, common predators, use a combination of tiny teeth known as radula and acids to penetrate their prey’s shell. 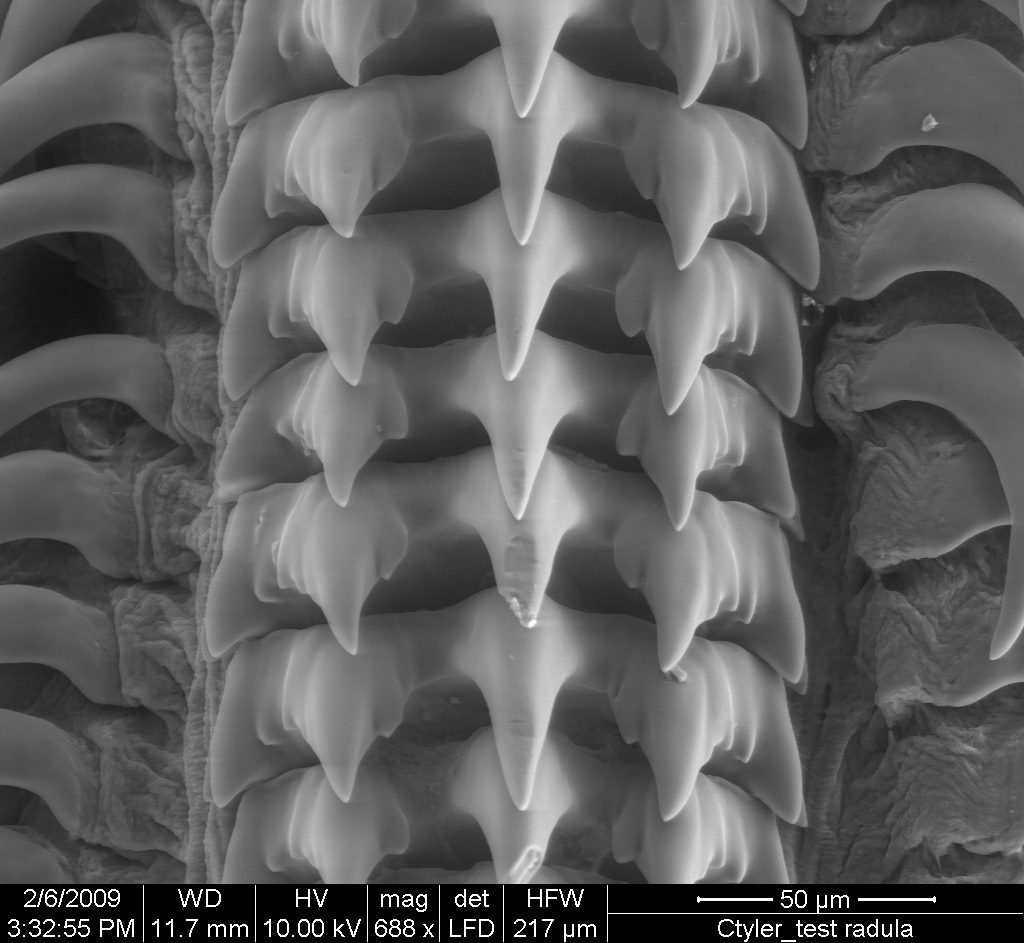 Carnivorous snails and slugs use radula, a conveyor belt-like band of teeth, to scrape away at the protective shell of their prey. Photo courtesy of Carrie Tyler of Miami University and James Schiffbauer of the University of Missouri 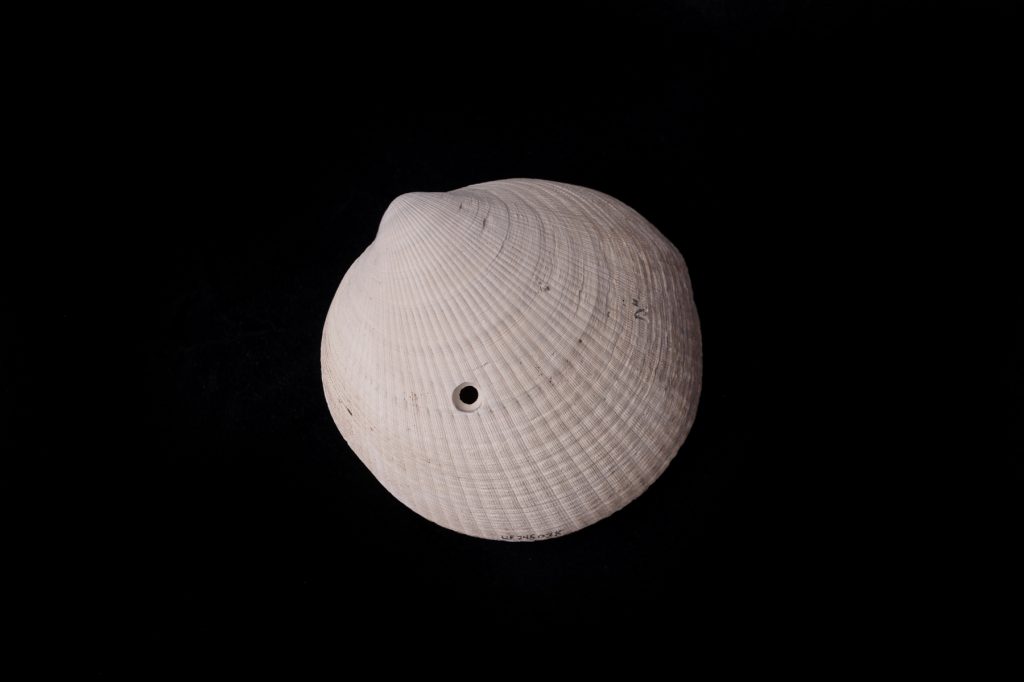 The hole in this American bittersweet, Glycymeris americana, testifies to the mollusk’s end as a meal for a drilling predator about 2.2 million years ago.

The team then used data compiled from 6,943 drilled animals representing many fossil species to examine trends in the size of drill holes, prey size and predator-prey size ratios, starting in the Cambrian Period—when most marine organisms appeared—and running to the present.

Despite growing bigger, predators may not have needed to switch to larger targets because prey became more nutritious through time, the researchers said. In the Paleozoic Era, about 541 million to 252 million years ago, clam-like organisms known as brachiopods were the most common prey available. But predators gained few nutrients from brachiopods and gradually transitioned to mollusks, similarly-sized but meatier prey that became abundant in oceans after the Paleozoic.

“In modern oceans, a predator can gain quite a bit of food from eating a small animal,” Kowalewski said. “This was not the case 500 million years ago when much less fleshy prey items were on the menu. Ancient small prey could only satisfy the needs of small predators.”

Funding for the research came from the National Science Foundation, the Packard Foundation and the Jon L. and Beverly A. Thompson Endowment Fund.