Using artificial intelligence, researchers have discovered what is likely the largest animal mimicry complex on Earth, changing the way we see — or rather, hear — the night sky.

by Jerald Pinson • July 21, 2022
Using artificial intelligence, researchers have discovered what is likely the largest animal mimicry complex on Earth, changing the way we see, or rather hear, the night sky. Photo by Chandan Singh, CC BY 2.0

While a clear night sky might seem quiet and peaceful to us, empty of everything but stars, this nocturnal world is filled with a high-pitched cacophony of sound just beyond our ability to hear. Bats pierce the shadows with ultrasonic pulses that enable them to construct an auditory map of their surroundings, which is bad news for moths, one of their favorite foods.

Not all moths are defenseless prey, however. Some emit ultrasonic signals of their own that startle bats into breaking off pursuit. Many moths that contain bitter toxins avoid capture altogether by producing distinct ultrasounds that alert bats to their foul taste. Others conceal themselves in a shroud of sonar-jamming static that makes them hard to find with bat echolocation.

While effective, these types of auditory defense mechanisms in moths are considered relatively rare, known only in tiger moths, hawk moths and a single species of geometrid moth. But a new study published in the journal PNAS shows that ultrasound-producing moths are far more widespread than previously thought, adding three newly discovered sound-producing organs, eight new subfamilies and potentially thousands of species to the roster.

“It’s not just tiger moths and hawk moths that are doing this. There are tons of moths that create ultrasonic sounds, and we hardly know anything about them,” said senior author Akito Kawahara, a curator at the Florida Museum of Natural History’s McGuire Center for Lepidoptera & Biodiversity.

The researchers were also interested in understanding how these sounds might converge between moth species. In the same way that non-toxic butterflies mimic the colors and wing patterns of less savory species, moths that lack the benefit of built-in toxins can copy the pitch and timbre of genuinely unappetizing relatives.

After collecting and studying thousands of moths for over a decade in Ecuador, French Guiana, Mozambique and Malaysian Borneo, the researchers spent a final two weeks in Ecuador, where they recorded the alarm calls of every moth they could catch. Afterward, they analyzed these recordings with the help of a theoretical physicist and a machine learning algorithm that scrutinized each note, looking for similarities.

The program revealed what, up until now, other researchers had only guessed at: Moth species don’t act like individual composers, each with their own unique calling card and distinct style. Instead, a small number of moths derive their own scores, which other moths seem to replicate in complex acoustic mimicry rings.

Lead author Jesse Barber, a biology professor at Boise State University, says more work is needed to uncover the exact nature of these sounds, but he suspects the trailblazing moths at the center of these rings are likely noxious, while the copycats at the fringes are merely false advertisers.

“Moths and butterflies are collectively one of the most diverse groups on the planet, containing one of every 10 named animals. If these results pan out, it will likely be the largest set of mimicry complexes on Earth,” he said.

These ultrasonic warning systems seem so useful for evading bats that they’ve evolved independently in moths on multiple separate occasions. In each case, moths transformed a different part of their bodies into finely tuned organic instruments.

“Tiger moths have structures called tymbals, which buckle inward and outward,” Kawahara said. “Some of them use structures on their wings, some use their abdomens, while others use modified genitals!” 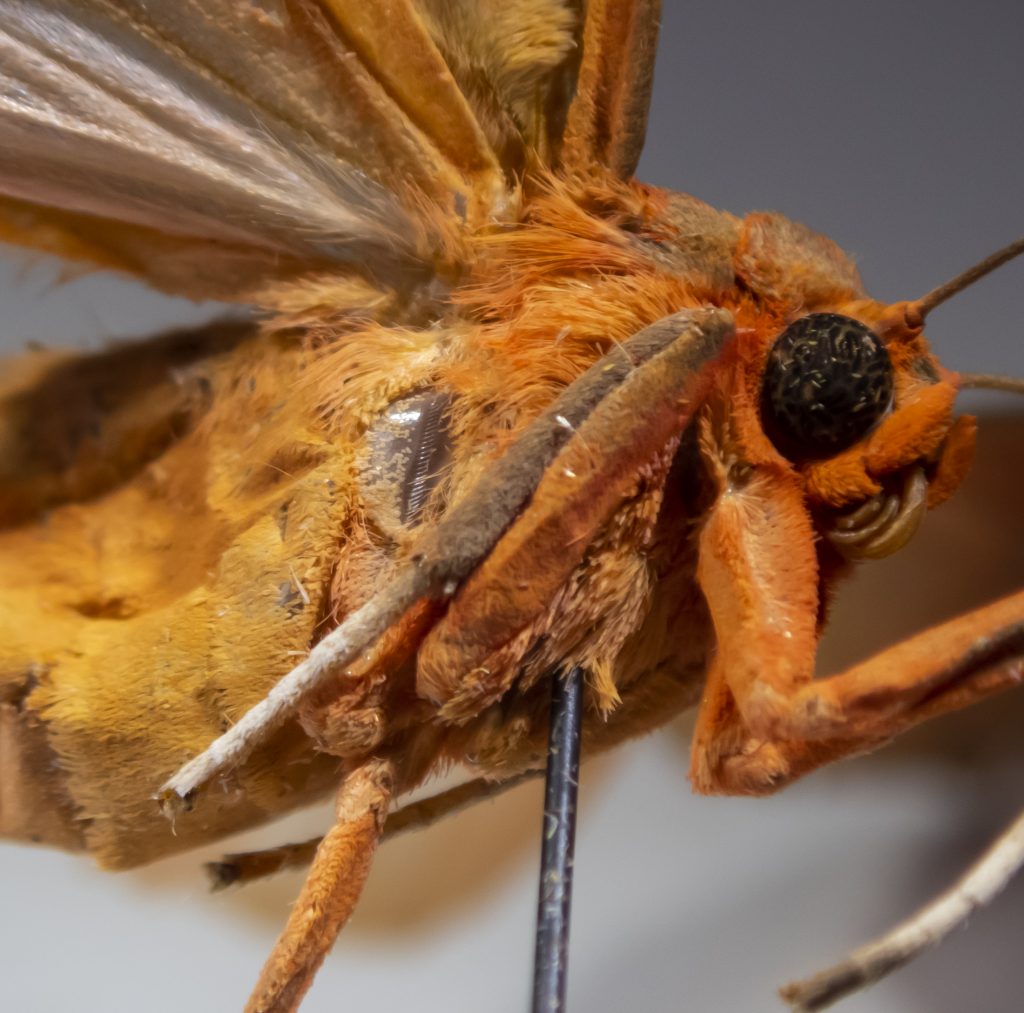 This moth in the genus Melese has paired tymbals on the side of its thorax that produce sound by buckling in and out. 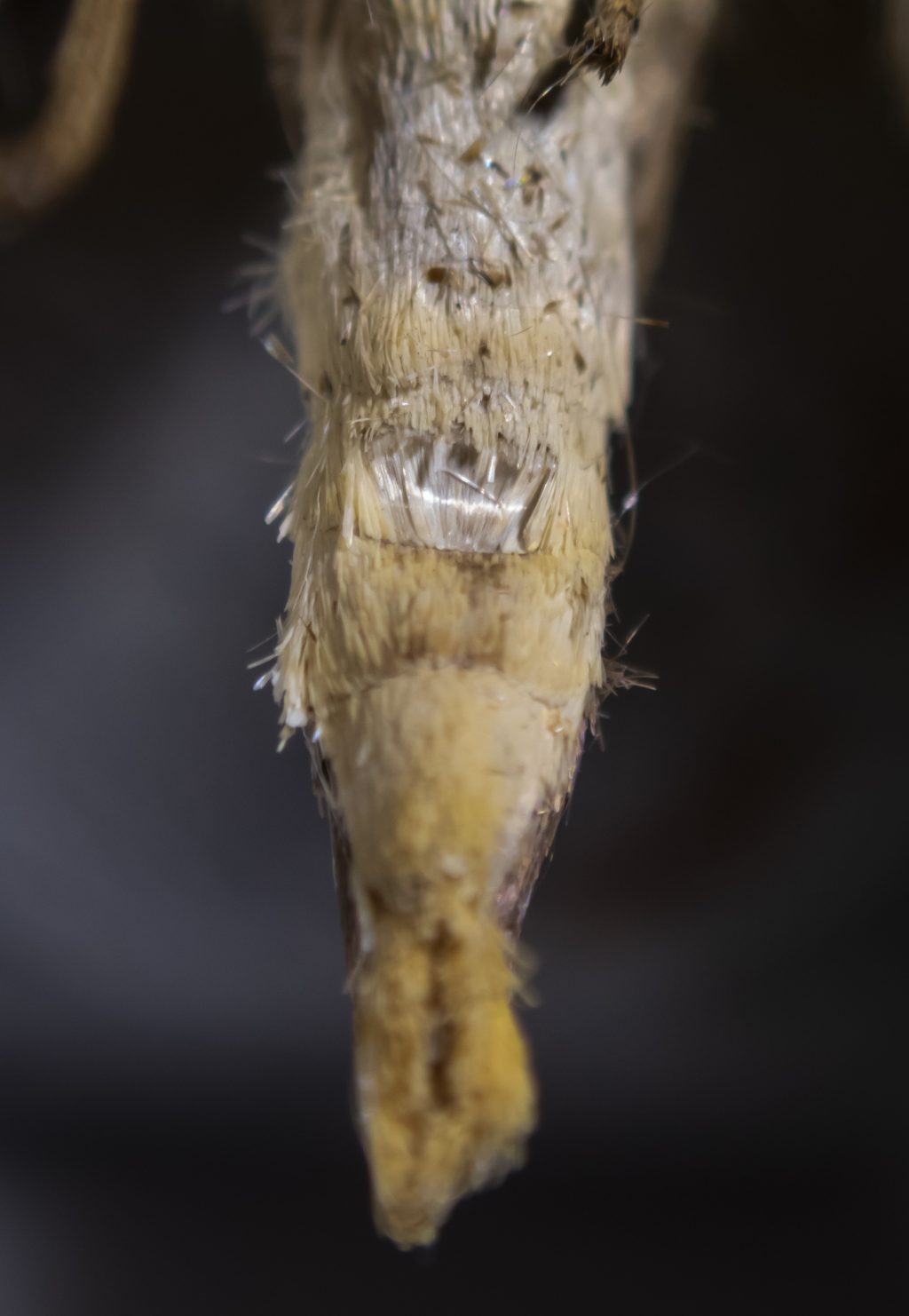 Moths in the genus Gonodonta create ultrasonic sounds by rubbing abdominal scales together, similar to the way crickets produce their trademark chirps.

Several of the various clickers and scrapers moths use as a bat repellant are described in this study for the first time. This includes a species of calpine moth that rubs together overlapping abdominal scales, similar to the way crickets make their characteristic chirping sounds. Another species, in a group called the snout moths, makes noise by using a structure resembling a guitar pick between its wings, which is strummed against when the moth is in flight.

Anti-bat signaling isn’t just restricted to moths. Some tiger beetles can create defensive clicks at bats by beating their wings against their protective casings. Other insect groups, such as katydids, crickets and mantids can hear incoming bats, and Barber notes the possibility that some may have the yet-unknown ability to communicate with their pursuers. But with roughly 40% of insect species currently at risk of extinction, at a rate that eclipses the ability of researchers to discover and name them, he warns of the very real possibility that this ultrasonic symphony may fall silent before we’ve had a chance to hear it or learn what it means.

“These mimicry complexes are likely not just limited to moths,” he said. “The whole tapestry of nocturnal insect life is probably involved, but the chance to understand the natural world is going away. So many lineages are going extinct that we’re likely in the last golden age of biology. We can still understand how life unfolded, if we do it now.”

The authors published their study in PNAS.

Funding for the study was provided in part by the National Science Foundation, the National Geographic Society and the Nouragues research field station.