The National Science Foundation has awarded emergency funding to archaeologists at three institutions to survey cultural heritage sites damaged by Hurricane Ian earlier this year. Researchers from the Florida Museum of Natural History, Pennsylvania State University and the University of Georgia collectively received more than $65,000 to carry out on-site surveys and generate high-resolution damage and risk-assessment maps for a region encompassing 20-square-miles.

“Our target areas around Pine Island Sound and Estero Bay were ground zero for the storm,” said Michelle LeFebvre, Florida Museum curator of South Florida archaeology and ethnography and the principal investigator on the collaborative grant.

The category 4 storm made landfall over southwest Florida on September 28 with sustained 150 mph winds, tying a record for the fifth strongest hurricane to breach land in United States’ history. The coast along Fort Myers was pummeled by storm surge of up to 18 feet, shattering previous records and inundating urban centers and historic sites. In the city proper, the Caloosahatchee River spilled over its banks and contributed to widespread flooding that lingered for days after the storm had passed.

When the skies cleared, entire communities had been rendered uninhabitable and millions of people were left without power. With an estimated $67 billion in insured losses, Ian was the costliest storm to ever hit the Sunshine State, and repairs to homes, businesses and parks will likely continue for the next several years.

The area that received the brunt of high winds and flooding was once the cultural hub of the Calusa people, who lived in South Florida for more than 1,000 years.

“By the 16th century, the Calusa were arguably one of the most politically complex non-agrarian societies in North America, and they were remarkable for their resilience in the face of European colonialism,” LeFebvre said.

Isabelle Holland-Lulewicz, an assistant professor of anthropology at Penn State and collaborator on the grant, studies the ways in which past cultures interacted with their environments in North America. To her, the Calusa heritage preserved in South Florida is incomparable.

“These sites are some of the most well-preserved examples of Indigenous architecture in the southeastern United States and promote a lot of community outreach in terms of archaeological research and public education,” she said.

Many of the region’s topographic features were built or altered by the Calusa, including large mounds, canals and fish corrals called water courts, and it’s likely Hurricane Ian damaged or even destroyed parts of these structures. 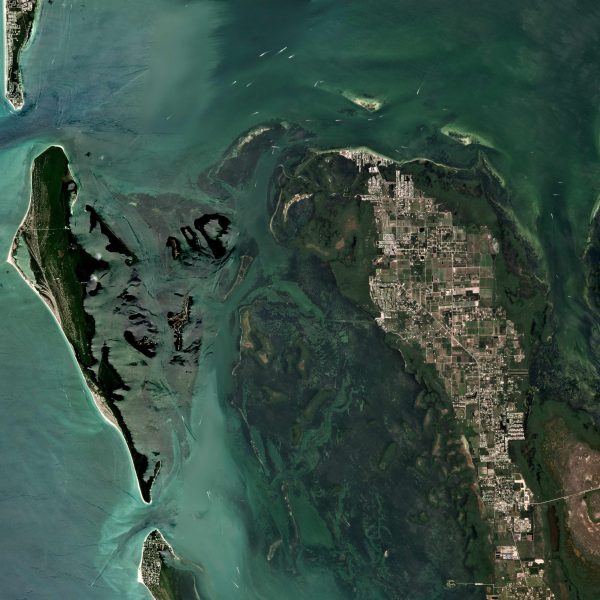 Archaeologists from three separate institutions have been awarded emergency funding from the National Science Foundation to survey archaeological sites damaged by Hurricane Ian in a 20-square-mile region near Fort Myers, shown here in this satellite image from Planet Application Program Interface: In Space for Life on Earth. San Francisco, CA. https://api.planet.com. 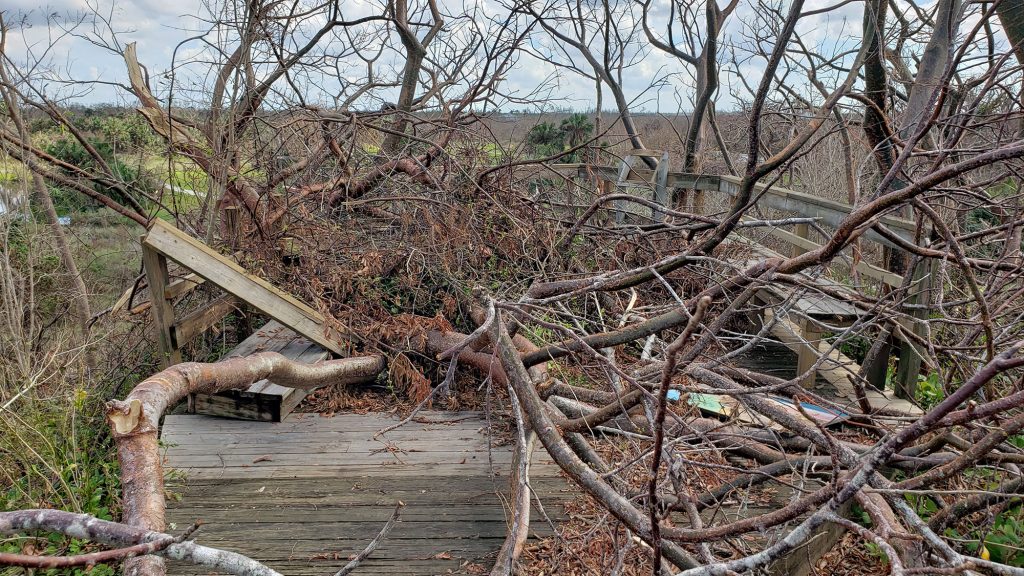 This gumbo limbo, Bursera simaruba, destroyed a viewing platform near a Calusa Mound, underscoring the need for careful and extensive efforts to clear brush from archaeological sites. 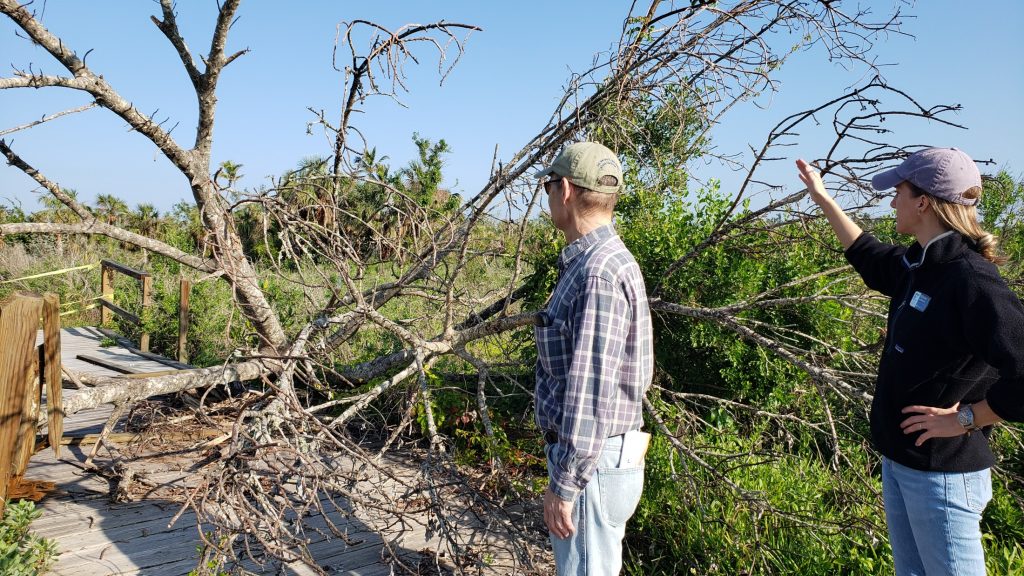 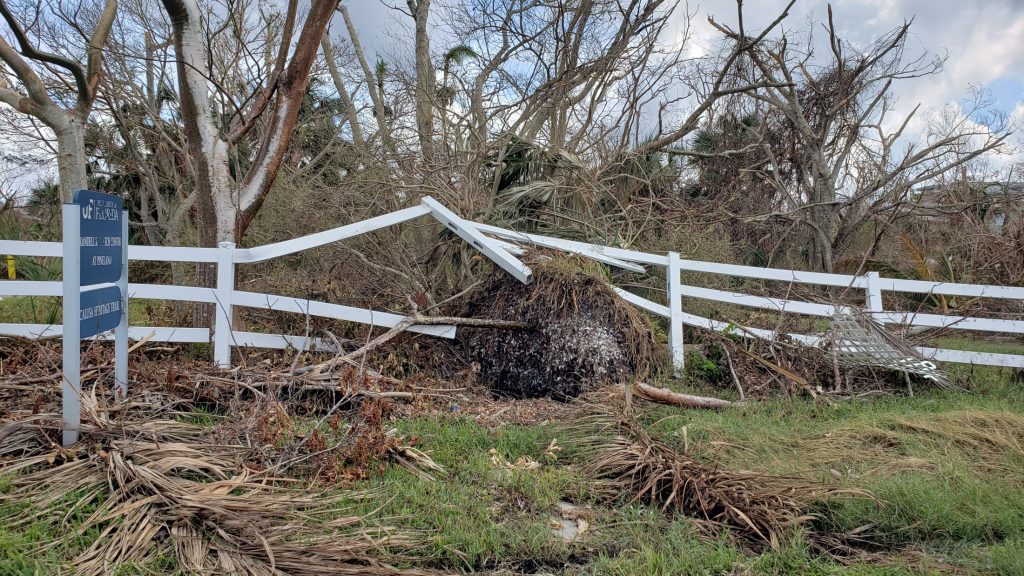 Trees were toppled across Pine Island, damaging facilities and archaeological sites, such as this midden near the entrance to the Randell Research Center.

Many of the sites are located on Pine Island, including the Pineland Archaeological District. Within this district, the Florida Museum’s Randell Research Center hosts 67 acres of preserved Calusa shell mounds, middens and the remnants of a canal system. The center’s Calusa Heritage Trail, which takes visitors on an interpretative one-mile tour of the island’s most prominent archaeological structures, received significant damage during the storm, as did the center’s headquarters in the historic Ruby Gill House.

Site managers across the survey region have reported widespread damage and expressed concern for future preservation.

“A primary focus of our survey work at the Randell Research Center and other Calusa sites will be to help support the hurricane recovery efforts of the communities that rely on and love these remarkable places,” LeFebvre said. “Often when speaking with locals, after they share updates on the recovery of their family, friends and community, the next thing they want to discuss is how we can all best move forward with site recovery and accessibility. That is our collective goal.”

Collaborators on the grant emphasize that archaeological sites across the region are significant places to Florida’s Indigenous peoples and that all survey information will be shared with tribal communities through regular updates and consultation.

LeFebvre and Holland-Lulewicz will coordinate the initial surveys, which they anticipate taking place from December of this year through March 2023. Victor Thompson, a distinguished professor of archaeology at the University of Georgia will organize drone flights to conduct aerial surveys during the same period.

Florida Museum curator of artificial intelligence, Nicolas Gauthier, will concurrently create damage assessment maps with data from satellite imagery taken both before and after the storm, which he will supplement with photographs from the aerial surveys.

“We’re using machine learning to trawl though a massive amount of data to find out which areas have been most affected and to assess current and future vulnerabilities to storm events,” Gauthier said. The maps will then be made publicly available as a resource for people on the ground to aid in near and long-term restoration efforts.

“We also have a lot of data about the event itself, including estimates of storm surge and the hurricane’s track,” he said. Gauthier plans to combine all this information with models of increasing hurricane frequency, sea level rise and storm surge to map how the area will change over the course of the next century.

Results of the survey will help inform which areas need the most protection going forward. Sites that were hit particularly hard by Ian or that are predicted to be the locus of increasingly severe damage in the future will be earmarked as areas of special concern.

LeFebvre and Gauthier stress that these and other survey efforts are critical to creating a bulwark against the compounding threats of rising seas and stronger storms. But they’re also optimistic in the face of these accelerating changes, suggesting the clues to building lasting communities may be hidden in the very sites they’re trying to preserve.

“This has all happened before,” Gauthier said. “People have lived and thrived here for thousands of years, so we hope to learn as much about these sites’ continued resilience over the long term as we do their short-term vulnerability.”