Bringing a fossil dig to the classroom

It was a chilly February day. A handful of Florida teachers gathered on the edge of a dirt pit in rural Levy County. Wind whipped across the open landscape, toying with scarves and making the little flags scattered around the pit dance on their long stems. Florida’s weak winter sunlight was sharp in their eyes as they listened carefully to their instructions.

These hand-chosen teachers were here to dig for fossils as part of a professional development field trip aimed at deepening the connection between hands-on science and K-12 students in classrooms around the state. They were beyond thrilled to expose fossils that likely hadn’t seen daylight in millions of years.

Participants learn about the tools they will use during the fossil dig. Florida Museum photo by Kristen Grace 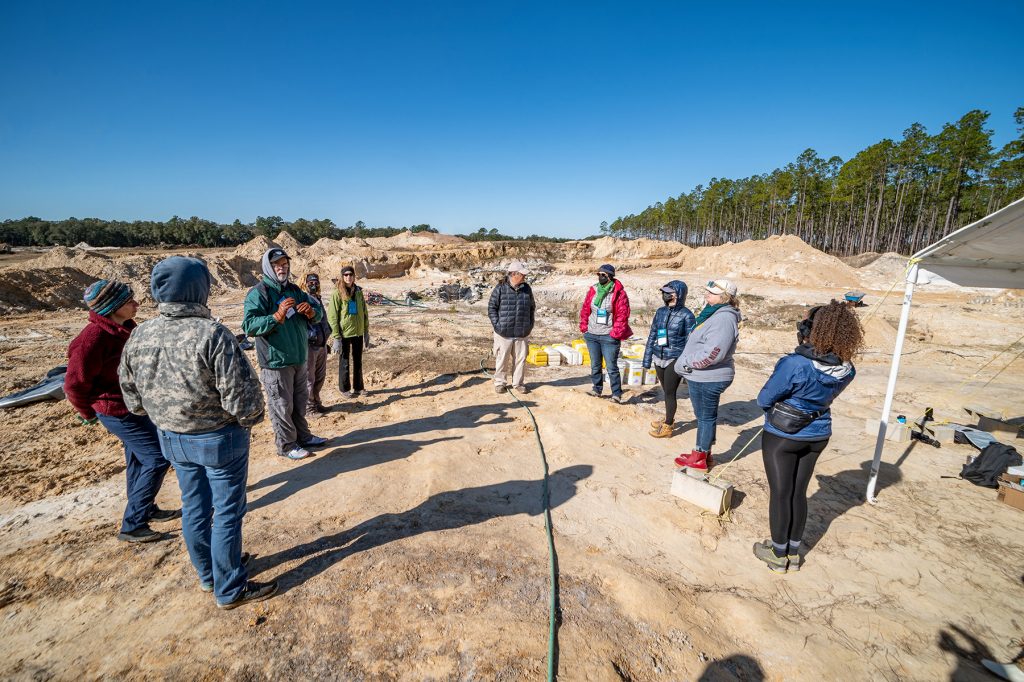 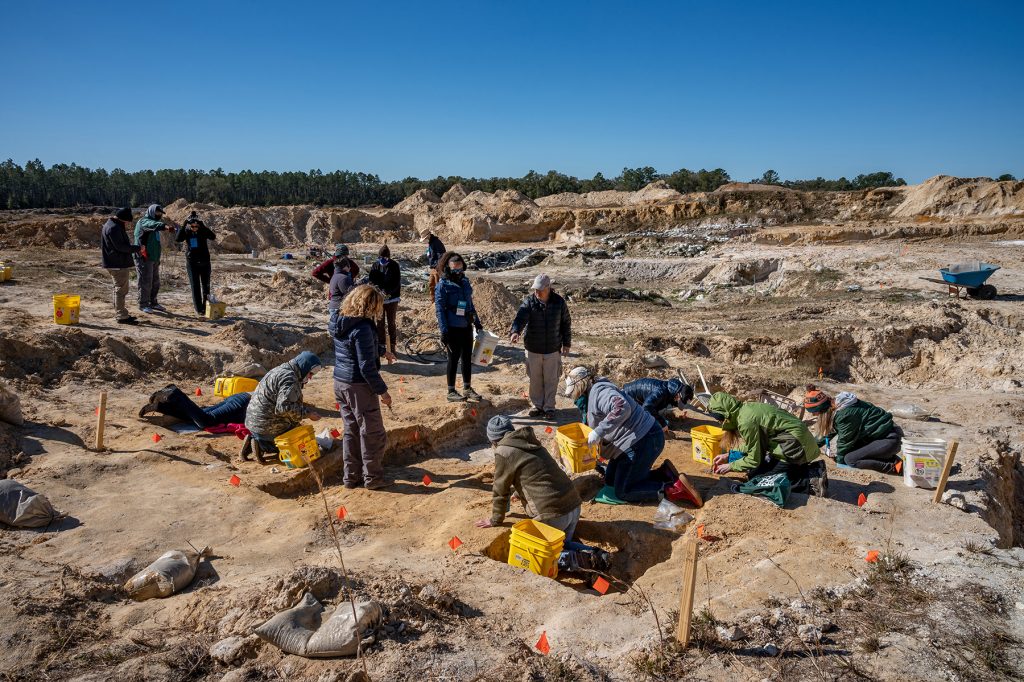 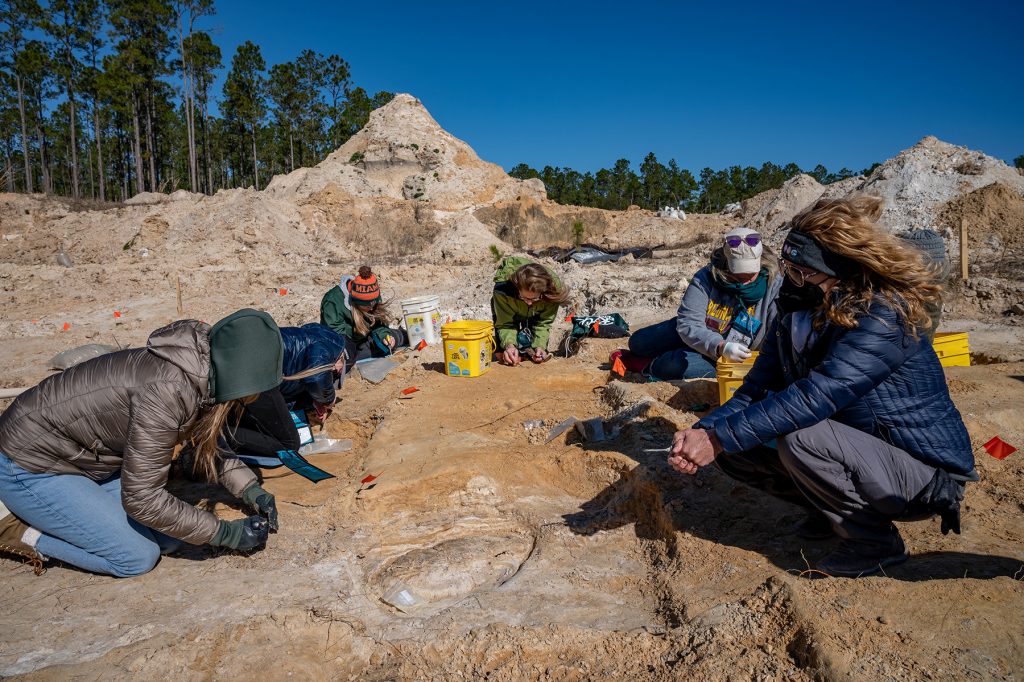 Teachers and scientist braved a cold and windy day to participate in the fossil dig. Florida Museum photo by Kristen Grace 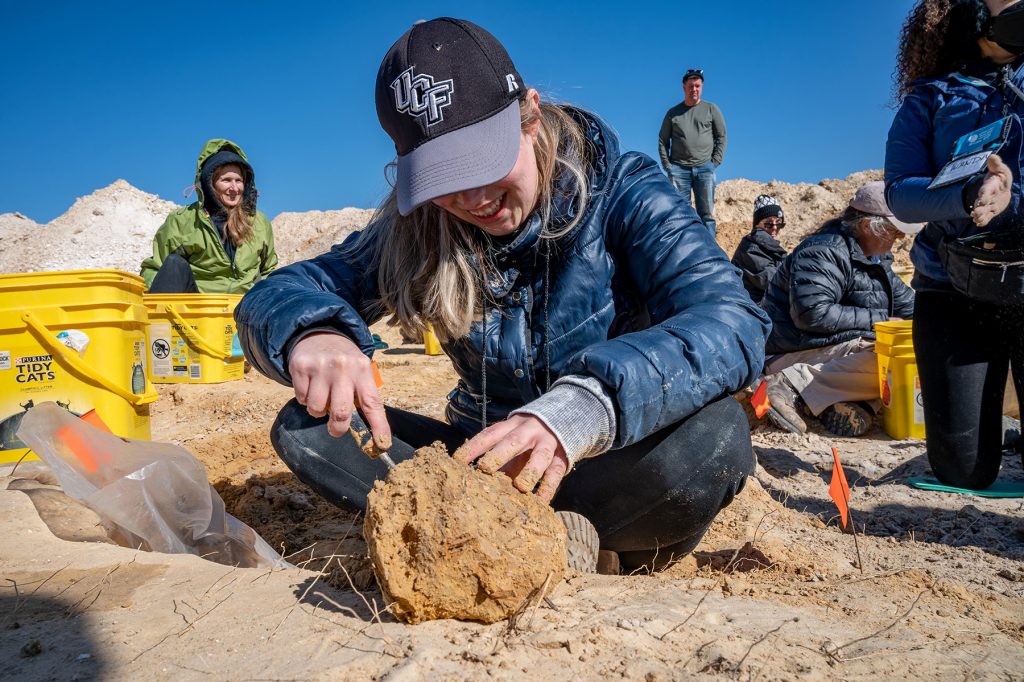 Lisa, one of the visiting teachers, works to break apart a large clump of red clay to see what it contains. Florida Museum photo by Kristen Grace

Jonathan Bloch, curator of vertebrate paleontology here at the Florida Museum, was also delighted to invite these teachers to the Montbrook dig for this amazing experience. But he’s always happy to get people excited about Florida fossils.

“The Montbrook fossil site is an incredibly interesting place to bring people,” he said. “It’s a new site for us. We’ve only been digging here for five or six years, and because of that, we’re making a lot of new discoveries. All the fossils that we’re finding are of things that are rare and sometimes completely new to science.”

During the course of the day, Jon moved from teacher to teacher, talking to them about their discoveries and showing them how to read the placement of fossils in the layers of earth. Sometimes it was a shark tooth or turtle shell, and sometimes they surfaced a large mammal tooth that needed to be closely examined.

“These aren’t things we’ve known about for a long time. In many cases, we’re finding new species or new records of the oldest records of things,” he said, referring to the thousands of fossils excavated over the last few years. 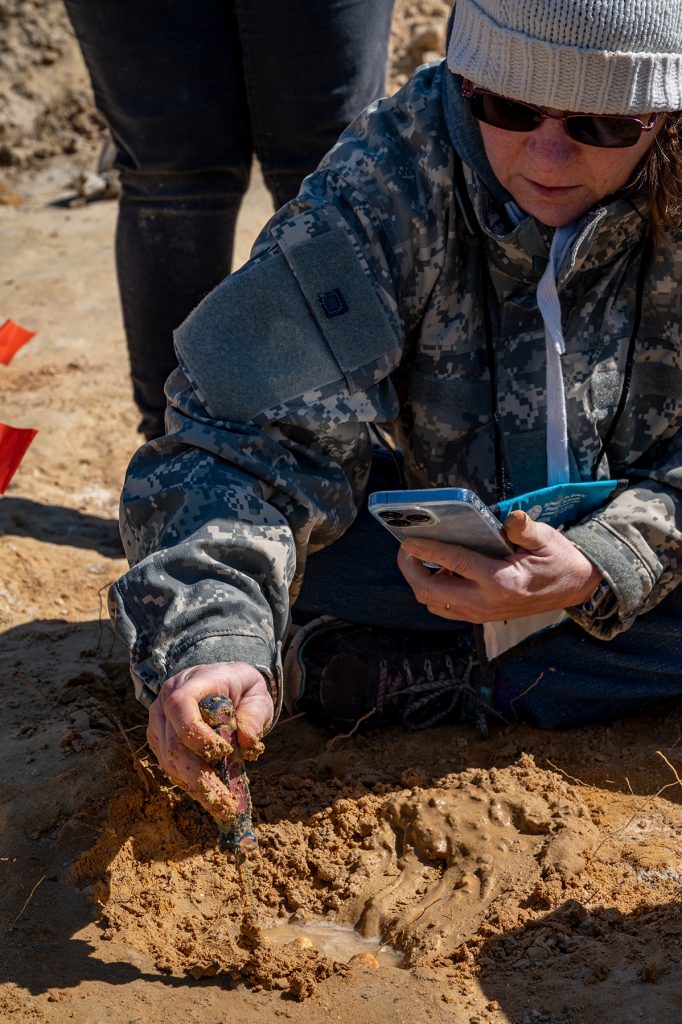 Wendy, one of the visiting teachers, now has a story with photos to share with her students. She uncovered a Gomphothere tooth while digging at the Montbrook fossil site. Florida Museum photo by Kristen Grace 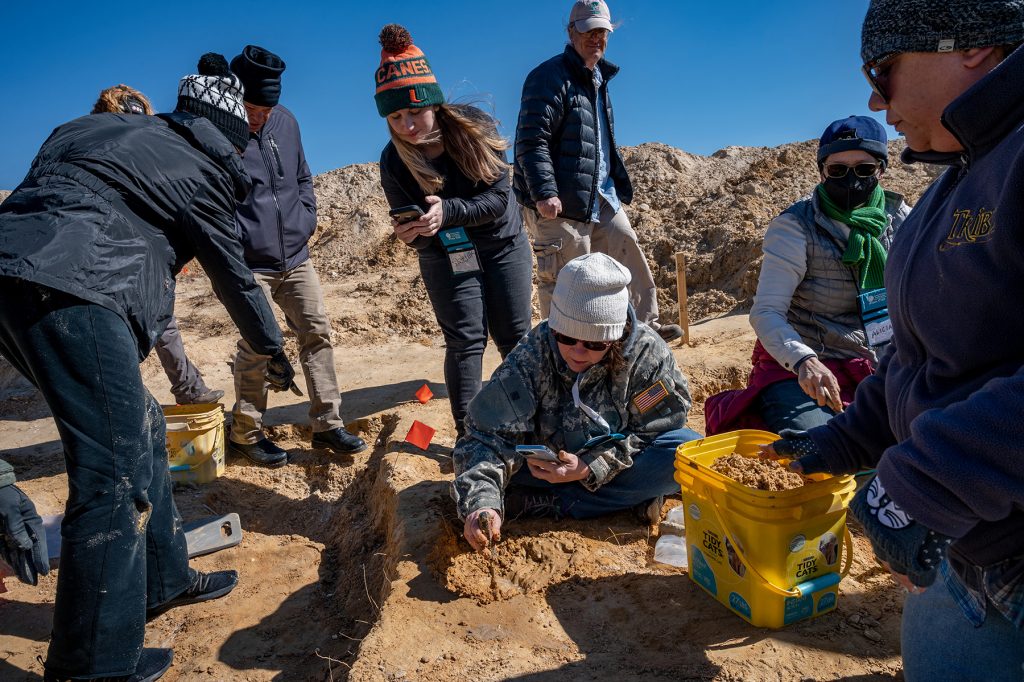 Wendy, one of the visiting teachers, shows the other teachers the large Gomphothere tooth she uncovered. Florida Museum photo by Kristen Grace 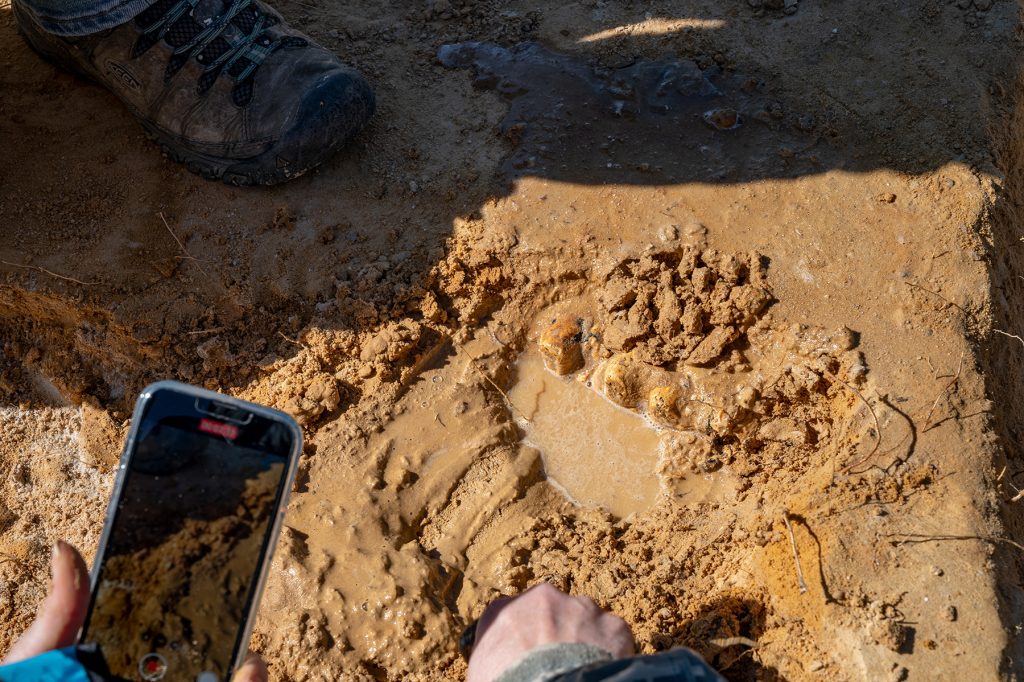 A large Gomphothere tooth was uncovered by one of the visiting teachers. Florida Museum photo by Kristen Grace 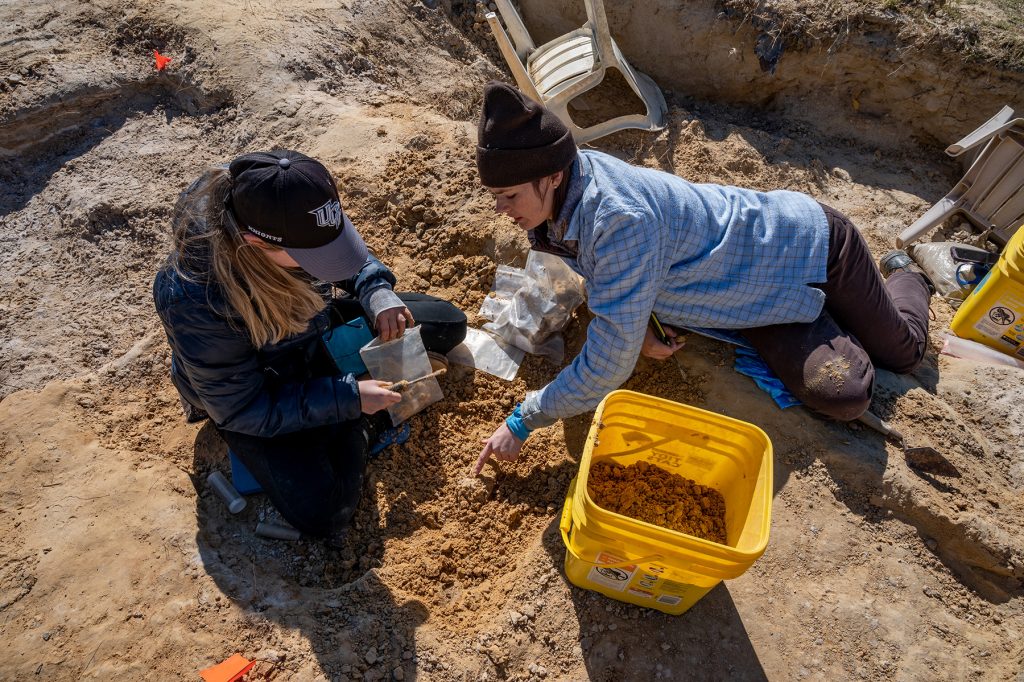 Visiting teachers and researchers collected many possible fossils during their time at the Montbrook site. Florida Museum photo by Kristen Grace 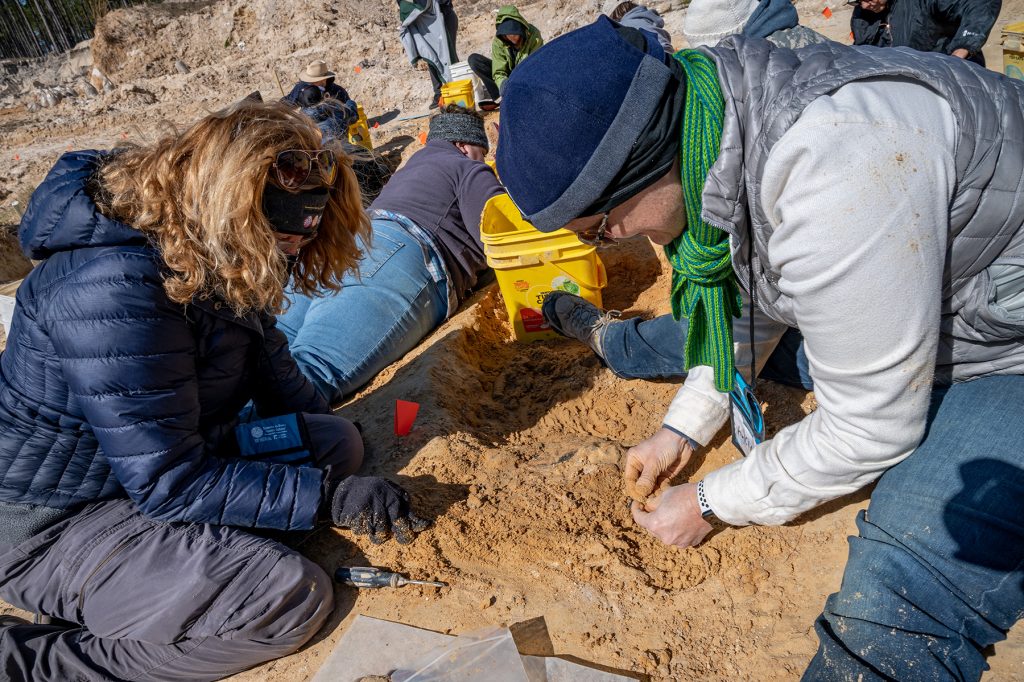 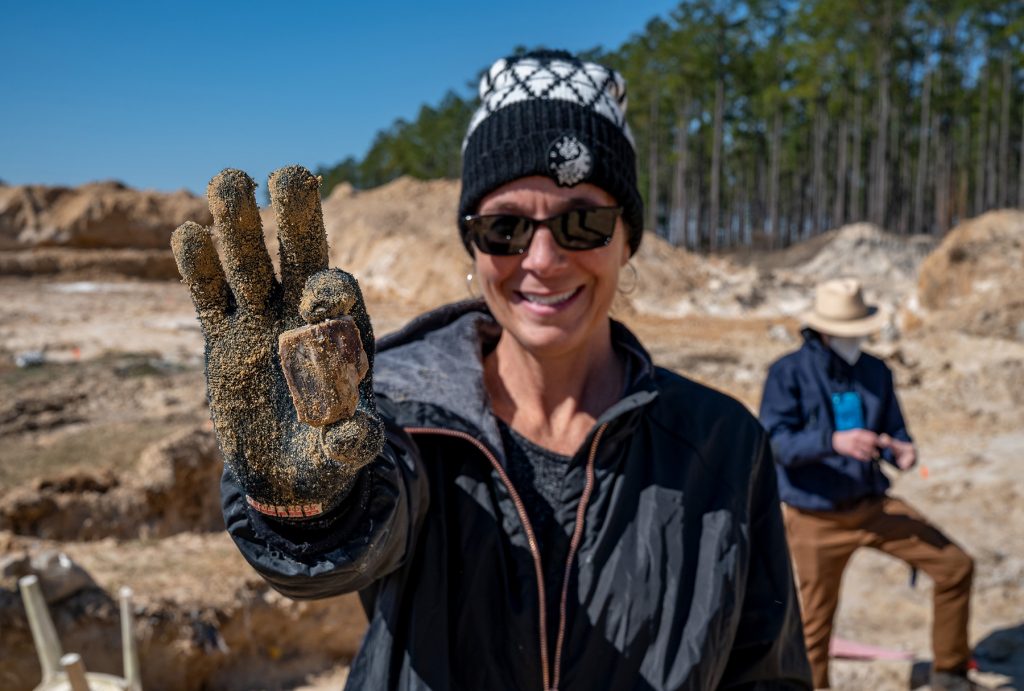 Susan, one of the participating teachers, shows off a piece of a tusk she found at the Montbrook fossil dig. Florida Museum photo by Kristen Grace

Bruce MacFadden was also braving the chilly weather to work with his cohort of teachers and help them translate this unique field trip into curricula for their classrooms. Bruce is a distinguished professor and curator of vertebrate paleontology, but most significantly, he is director of the Thompson Earth Systems Institute (TESI). One of TESI’s top initiatives is the Scientist in Every Florida School program, host of these visiting teachers.

“This is just the beginning of a four month long professional development process,” Bruce said. “They’re seeing what the context is in the field, collecting fossils. And we’ve given them bags of matrix where there will be tiny fossils.”

The teachers would be guided to develop curriculum based on their day at the site and the matrix from the dig to create hands-on activities for their students. Going back to their classrooms with real fossils would be pivotal for energizing students’ curiosity about the natural history of their state.

Alicia Bartol-Thomas, a teacher from Sarasota County, especially looked forward to bringing the matrix back to her students. “When we bring real things into the classroom, like fossils, for example, it’s really highly engaging for the kids. Having that hands-on piece…it means more than talking about anything just out loud or even doing a simulation online.” A source of passion in her teaching career was that chance to make science real for her students. 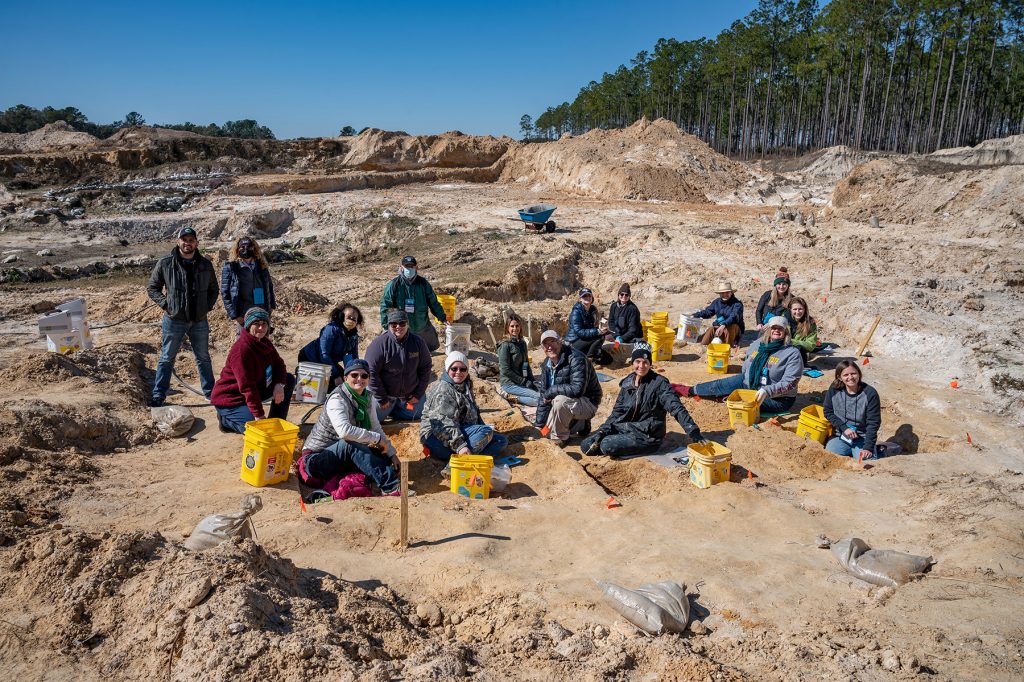 The visiting teachers and scientists who participated in the dig at the Montbrook Fossil site. Florida Museum photo by Kristen Grace 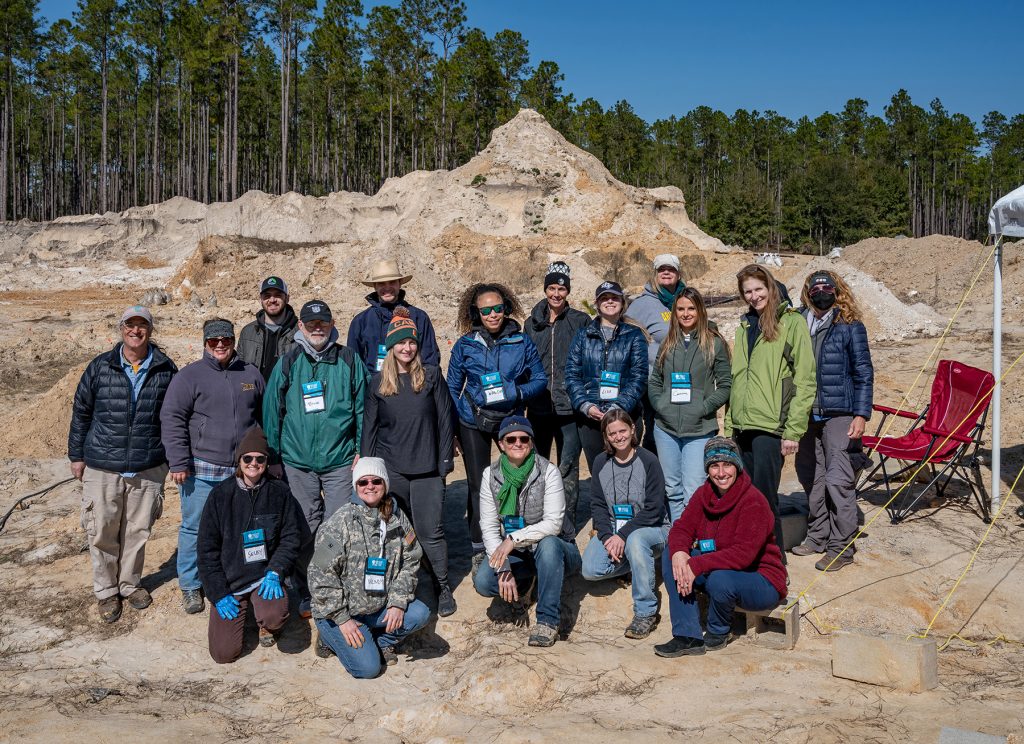 From a school in Escambia County, Skyelar Bryant wanted to show her students paleontology, or any other STEM field for that matter, was more accessible than they might think. “It’s one thing to read about it in the books, but it’s another thing to actually hear your teacher come back with stories and anecdotes and pictures and…fossils of turtles that are millions of years old and megalodons and all this stuff that they always hear about, but they don’t actually get to see.”

Despite the drying wind and the muddy hands, these teachers soaked in the reality of what they were able to do. Digging up fossils seems like a distant adventure reserved for Hollywood movies and a few scientists. But here they were touching the ancient remains of extinct animals that once lived in our state.

“There’s so much history in Florida and there’s so much that kids don’t know,” said Mary Lynn Hess, a teacher from Seminole County. “And for me to experience this, I’m going to be able to take it back to them and say, Hey, look what I discovered. Is there anything that you want to know?”

This professional development program was funded by a grant from the National Science Foundation to improve online accessibility of vertebrate fossils in Florida.