Most adult cornsnakes are about 30-48 inches (76-122 cm) in total length. Adults are orangish-brown with black bordered orange, red, or brownish blotches. There is a spear-shaped pattern on the head and neck. Juveniles are similar in appearance to adults, but they may be more brownish in coloration. 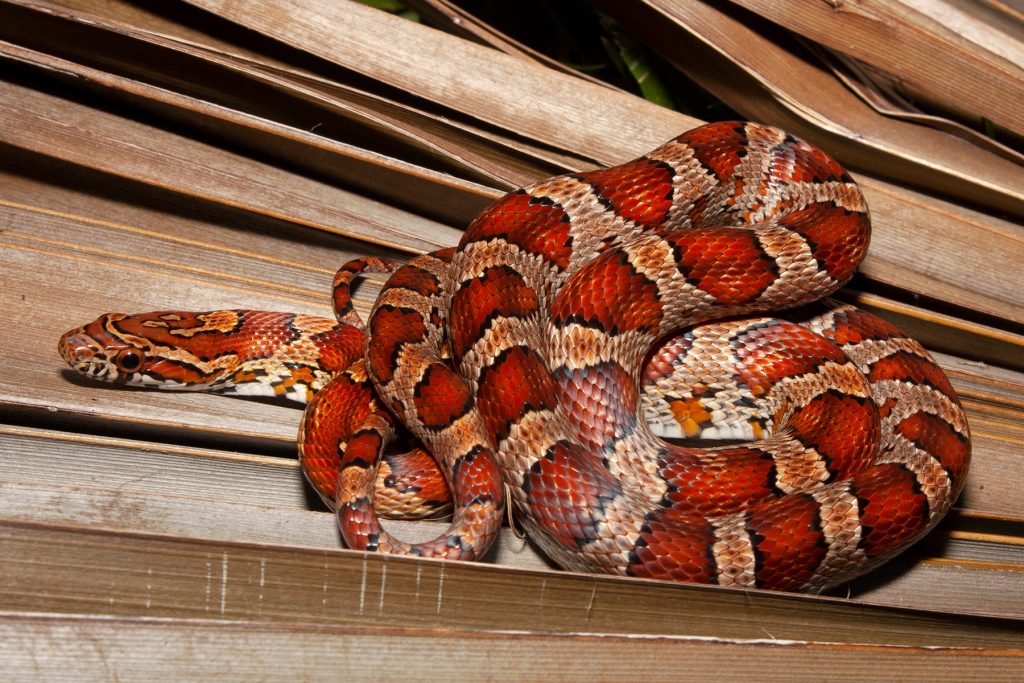 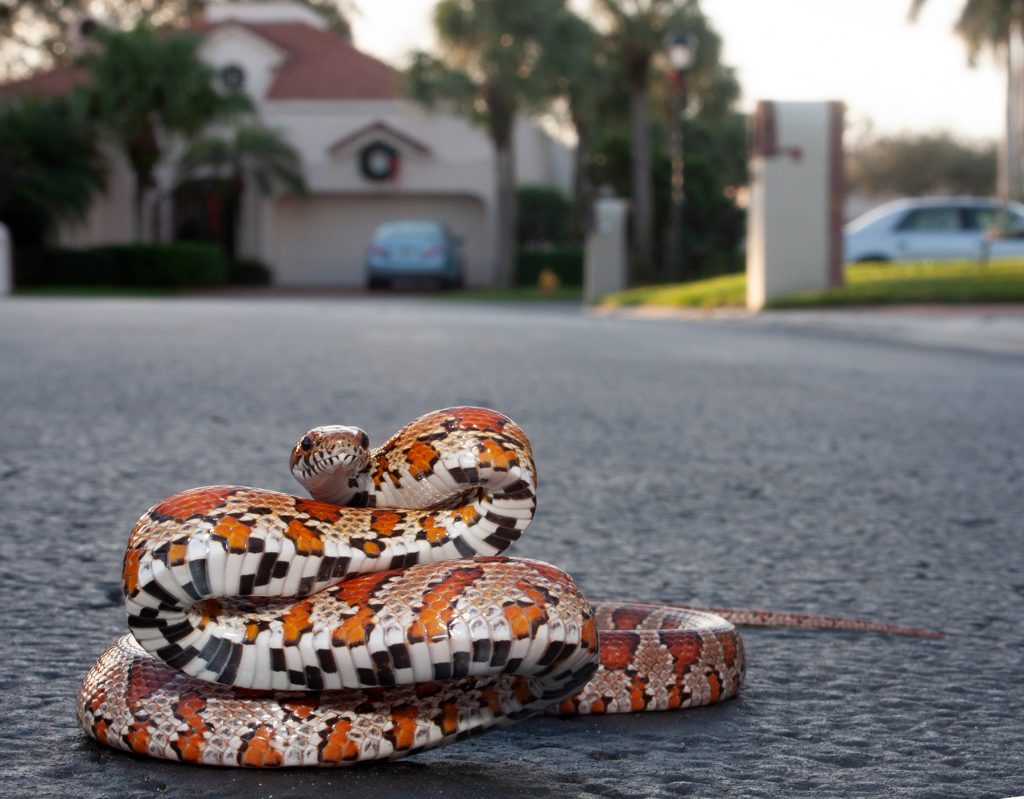 The defensive behavior of a Red Cornsnake. Photo courtesy of Todd Pierson. 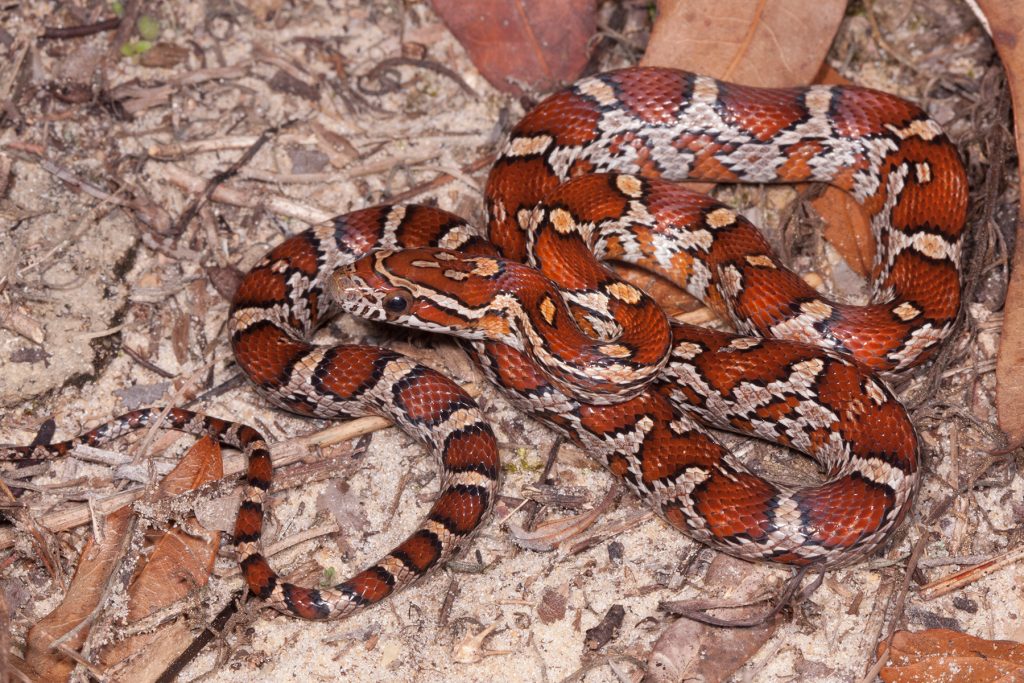 Cornsnakes are found throughout mainland Florida in every county. They also occur throughout the Florida Keys.

Non-venomous. Cornsnakes are not dangerous to people or pets, but they will readily bite to defend themselves. These snakes are not aggressive and avoid direct contact with people and pets. Virtually all bites occur when the snakes are intentionally molested.

Northern Mole Kingsnake (Lampropeltis rhombomaculata) Non-venomous Northern Mole Kingsnakes are only found in the Florida Panhandle. This species has 55 small dark blotches down the back, smooth scales, a light Y-shaped pattern on the back of the head and neck, a clouded brownish belly, and lack a distinct neck.

Eastern Ratsnake (Pantherophis alleghaniensis) Non-venomous Eastern Ratsnakes lack a spear-shaped pattern on top of the head and lack a black and white checkerboard pattern on the belly. Adults in peninsular Florida typically have four dark stripes running down the back and sides.

Most adult cornsnakes are about 30-48 inches (76-122 cm) in total length, with a record length recorded of 74 inches (188 cm). Adults are orangish-brown with black bordered orange, red, or brownish blotches. The belly is usually a black and white checkerboard pattern, though orange may also be present. The underside of the tail has two black stripes. There is a spear-shaped pattern on the head and neck. The scales are weakly keeled, and there are 27-29 dorsal scale rows at midbody. The pupil is round. Juveniles are similar in appearance to adults, but they may be more brownish in coloration.

Cornsnakes are commonly found in pinelands, hardwood hammocks, swamps, and agricultural fields. Adults and juveniles of this species are often found in suburban neighborhoods where development encroaches into favorable habitats.

When approached, cornsnakes may either flee for shelter or remain motionless to avoid detection. However, if they are cornered, both juveniles and adults will take an S-shaped posture and strike at the attacker while rapidly vibrating the tip of the tail, which produces a buzzing sound in leaf litter. If grabbed or pinned, they may bite the attacker. But these snakes typically calm down quickly if held. Nonetheless, these snakes are not aggressive, and striking is only used in defense as a last resort.

Cornsnakes commonly feed on lizards, frogs, rodents, and birds and their eggs. Cornsnakes constrict larger prey with coils of their body, but they often swallow smaller prey alive.

In Florida, females lay around 3-40 white elongate eggs, which typically hatch between August and September. The eggs are often laid in mammal burrows, loose debris, and rotting logs.

Red Cornsnakes are primarily nocturnal (active at night). They are both terrestrial and extremely good climbers. They are commonly found under rocks and logs and in trees coiled under bark and within palm fronds.

Red Cornsnakes are extremely beneficial to people because they prey heavily on many species that are considered pests. In fact, the name “Cornsnake” is a holdover from the days when southern farmers stored harvested ears of corn in a wood frame or log building called a crib. Rats and mice came to the corn crib to feed on the corn, and cornsnakes came to feed on the rodents. It is hard to imagine a better man-made habitat, with rafters and logs on which the snakes could climb and hide, and they were paid for using it by eating the pesky rodents.