Most adult Eastern Ratsnakes are about 42-72 inches (106-183 cm) in total length. This species is variable in coloration, but juveniles are gray with dark blotches. In the Panhandle, juveniles and adults look alike. However, adults in the Florida peninsula can be yellow, orange, tan, or gray with four dark longitudinal stripes, while sometimes retaining the dark dorsal blotches found in juveniles. 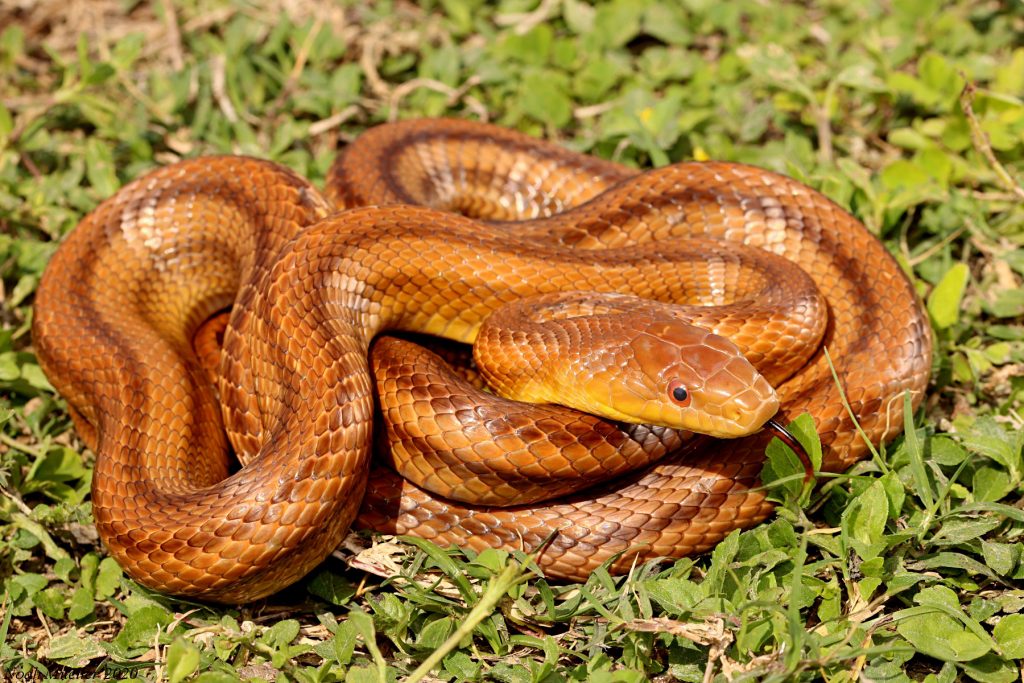 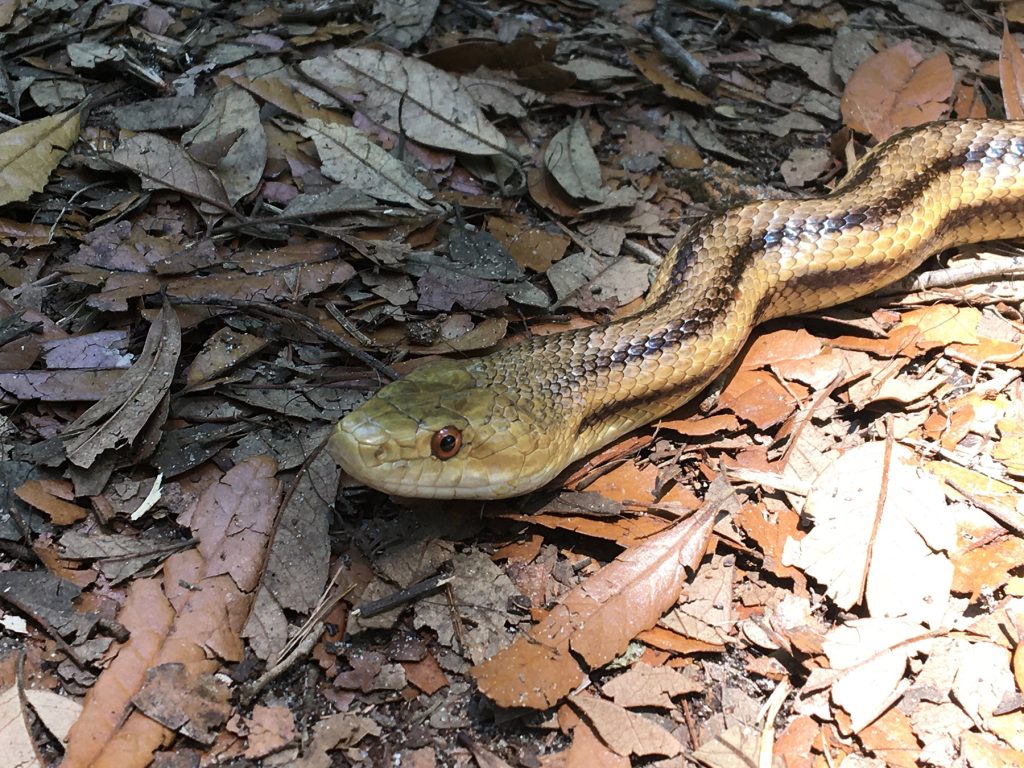 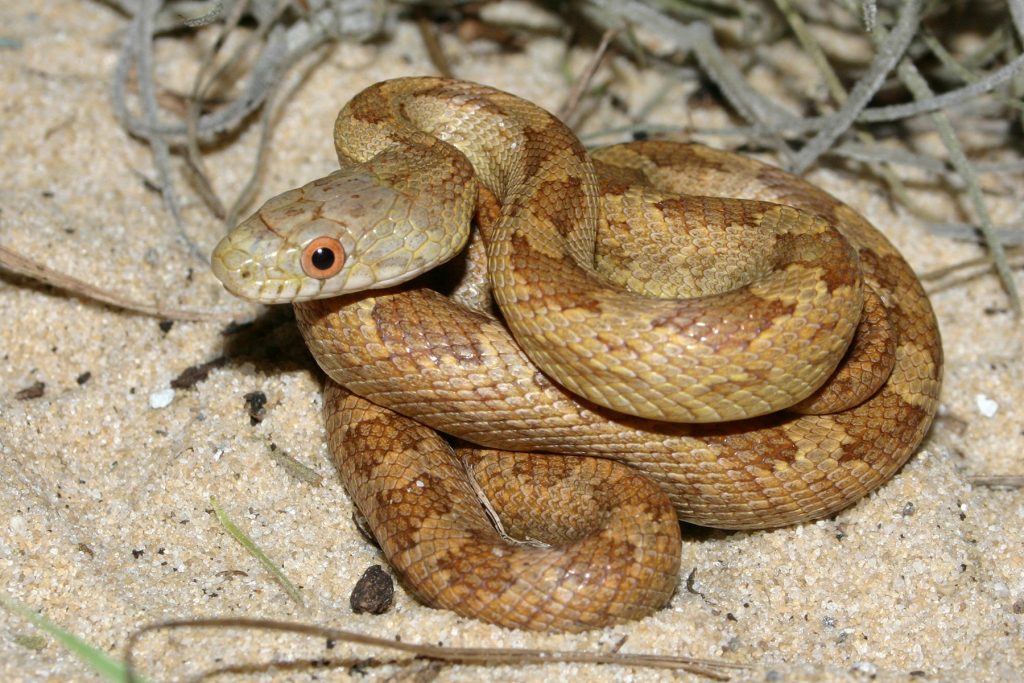 In Florida, Eastern Ratsnakes occur in the Panhandle east of the Apalachicola River and throughout the peninsula south to Key Largo. However, they do readily interbreed with Gray Ratsnakes (Pantherophis spiloides) in the Panhandle.

Non-venomous. Eastern Ratsnakes are not dangerous to people or pets, but they will readily bite to defend themselves. These snakes are not aggressive and avoid direct contact with people and pets. Virtually all bites occur when the snakes are intentionally molested.

Most adult Eastern Ratsnakes are about 42-72 inches (106-183 cm) in total length, with a record length recorded of 101 inches (256.5 cm). This species is variable in coloration, but juveniles are gray with dark blotches and a sandy-gray belly with dark square blotches. In the Panhandle, juveniles and adults look alike. However, adults in the Florida peninsula can be yellow, orange, tan, or gray with four dark longitudinal stripes, while sometimes retaining the dark dorsal blotches found in juveniles. The tongue is mostly black. The scales are weakly keeled, and there are 25-27 dorsal scale rows at midbody. The pupil is round.

When approached, Eastern Ratsnakes may either flee for shelter or remain motionless to avoid detection. However, if they are cornered, both juveniles and adults will take an S-shaped posture and strike at the attacker while rapidly vibrating the tip of the tail, which produces a buzzing sound in leaf litter. If grabbed or pinned, they may bite the attacker. But these snakes typically calm down quickly if held. Nonetheless, these snakes are not aggressive, and striking is only used in defense as a last resort.

Eastern Ratsnakes commonly feed on lizards, frogs, rodents, and birds and their eggs. These snakes constrict larger prey with coils of their body, but they often swallow smaller prey alive.

In Florida, females lay around 4-44 white elongate eggs, which typically hatch between July and September. The eggs are often laid in moist areas such as rotting vegetation and rotting logs.

Eastern Ratsnakes are primarily nocturnal (active at night). They are both terrestrial and extremely good climbers. They are commonly found under rocks and logs, but they can also be found in trees coiled under bark, within knot holes, and within palm fronds.

Eastern Ratsnakes are extremely beneficial to people because they prey heavily on many species that are considered pests.

As its common name implies, these snakes feed voraciously on rodents. However, they will also eat chicken eggs and chicks, which is the source of one of their common names, “chicken snake”.

The names for species and past subspecies of ratsnakes within the “Pantherophis obsoletus” complex have changed many times over the last several years. However, the currently proposed names and relationships are not universally accepted, and they may continue to be tweaked as additional information is collected and analyzed.

Still have questions about snakes or identifications? Feel free to email the herpetology staff at the Florida Museum with your questions or feedback about this profile.

Banner photo courtesy of Noah Mueller. Please credit any photographers on the page and see our copyright policy.