Most adult North American Racers are about 20-56 inches (50-142 cm) in total length. This is a long and slender snake with large and prominent eyes. Adults are black or bluish/black with white or whitish markings on the chin and throat. Juveniles are gray with distinct reddish-brown blotches running down the back of the head and body. 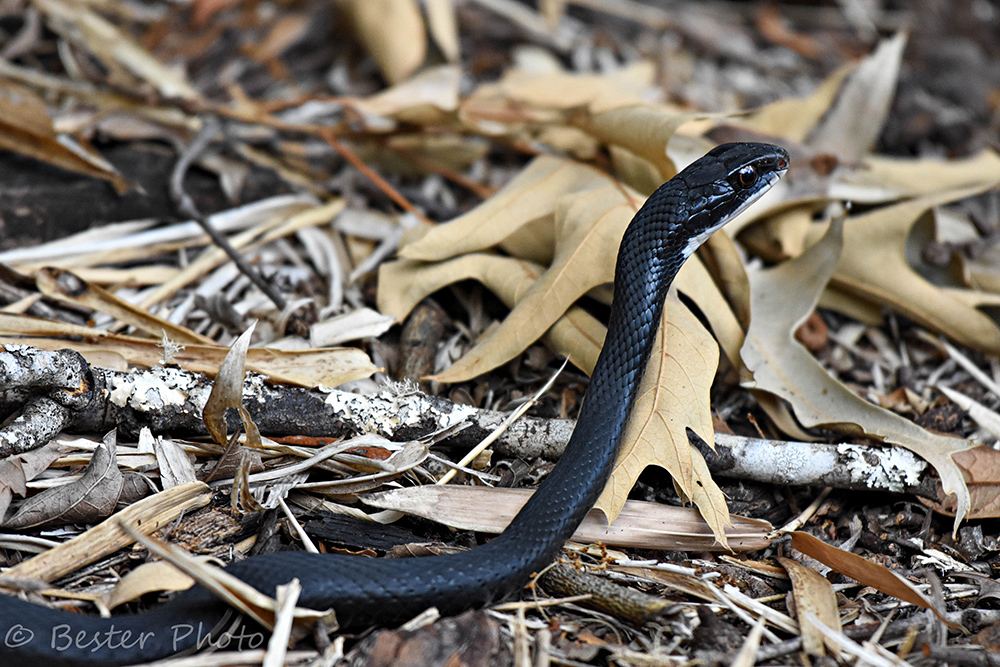 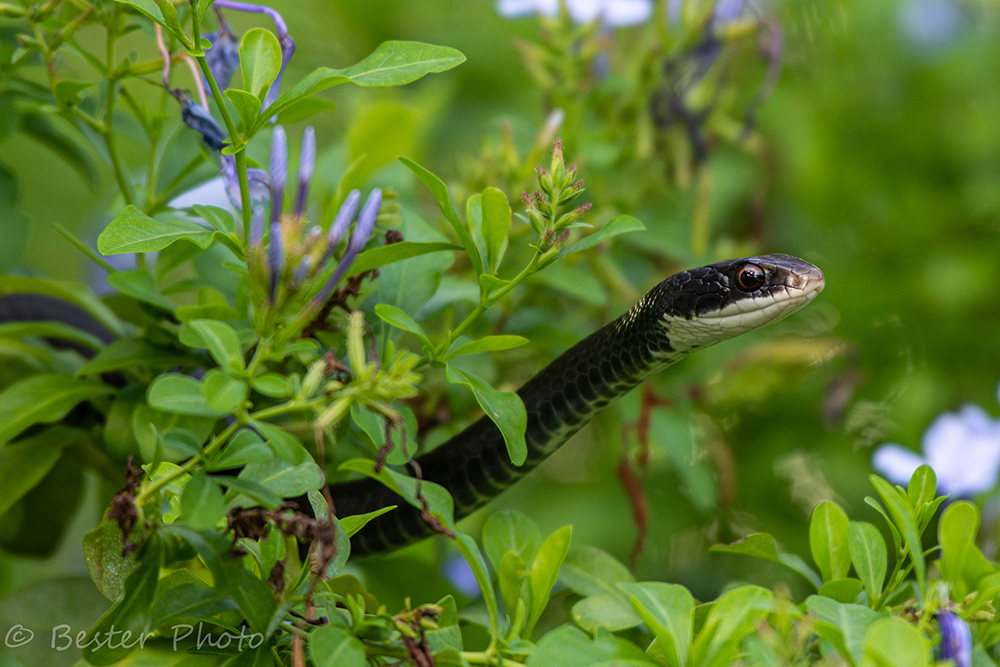 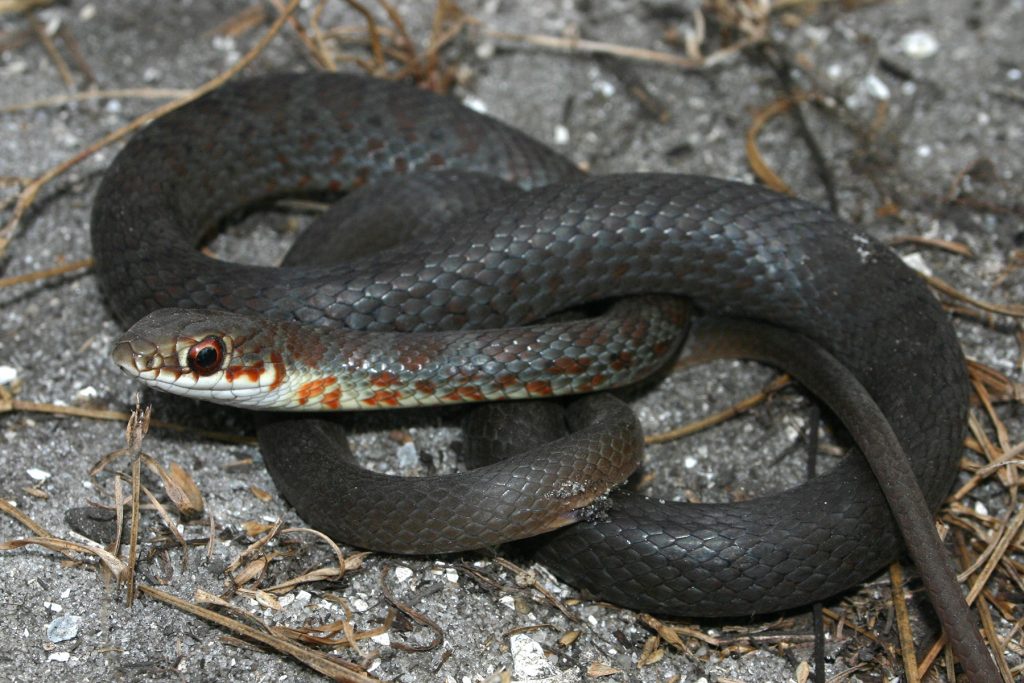 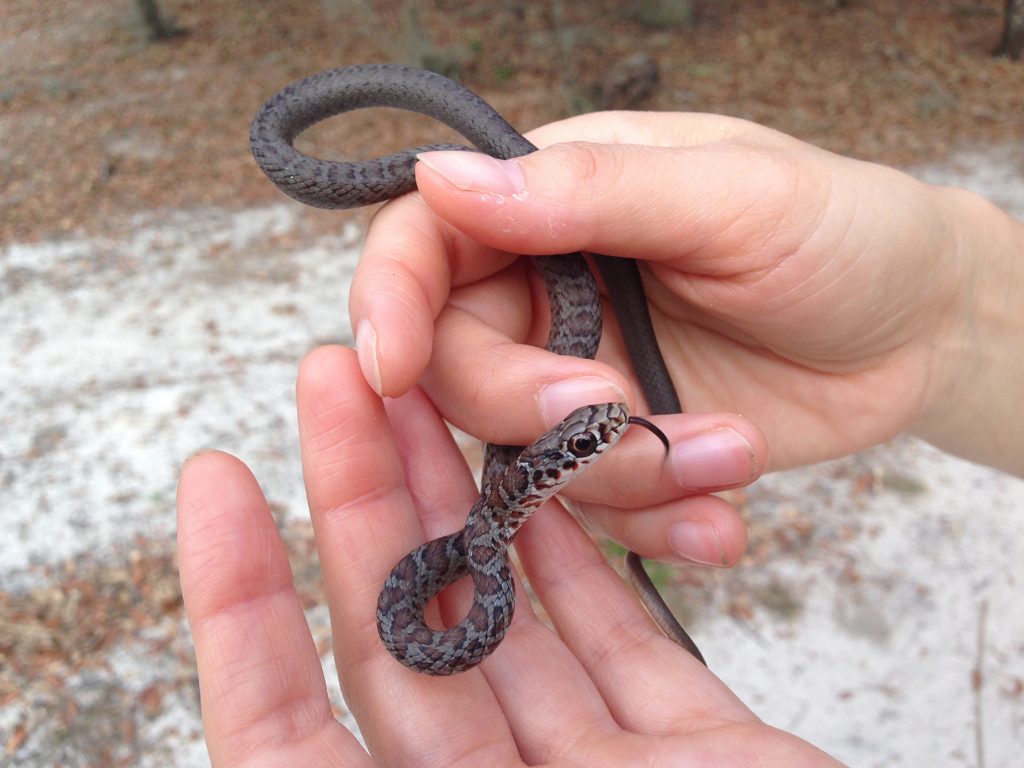 North American racers are found throughout mainland Florida in every county. They also occur on the Florida Keys.

Non-Venomous. North American racers are not dangerous to people or pets, but they will readily bite to defend themselves. Racers are not aggressive and avoid direct contact with people and pets. Virtually all bites occur when the snakes are intentionally molested.

Most adult North American Racers are about 20-56 inches (50-142 cm) in total length, with a record length recorded of 72 inches (182 cm). This is a long and slender snake with smooth scales in 17 dorsal rows at midbody. Adults are black or bluish/black with white or brown and white markings on the chin and throat. The belly is grayish to black and without any markings. The head is only slightly distinct from the neck. The pupil is round, and the eyes are large and prominent. Juveniles are gray with distinct reddish-brown blotches running down the back of the head and body that gradually fade into a solid-colored tail. The juvenile pattern gradually changes to the adult pattern and is completely replaced after about two years.

When approached, racers will typically flee for shelter, relying on speed and agility to avoid capture. However, if they are cornered, both juveniles and adults will strike at the attacker and rapidly vibrate the tip of the tail, which produces a buzzing sound in leaf litter. If grabbed or pinned, they will readily bite the attacker. Nonetheless, these snakes are not aggressive, and striking is only used in defense as a last resort.

North American Racers are opportunistic and diurnal predators with a diet as varied as their choice of habitat. They are known to feed on small mammals, birds and their eggs, lizards, turtles, snakes, frogs, salamanders, fishes, insects and spiders. In Florida, frogs, lizards, and small snakes make up the majority of their diet. Despite their scientific name (Coluber constrictor), racers are not true constrictors and overpower their prey by simply grabbing it in their jaws and pressing it against the ground until it stops struggling or by quickly swallowing it alive.

In Florida, females lay around 1-36 white oval eggs, which typically hatch between May and October. The eggs are often laid in loose debris such as leaf litter, sand, or rotting logs.

North American Racers are one of the snakes most commonly seen by Floridians. These snakes inhabit both rural and urban habitats and are frequently seen in residential areas during the daytime. These are fast, agile, and heat-loving snakes with keen eyesight. They can often be seen crawling with their head and neck raised above the ground as they scan their environment.

Juvenile North American Racers are often mistaken for pygmy rattlesnakes. Juvenile racers are long and pencil thin, whereas pygmy rattlesnakes are much thicker for their length. As always, if you are not 100% positive of the identification of a snake, it is best for everyone involved to leave it alone.