Go behind the scenes and learn more about your favorite movies with a panel of scientists, artists and special effects experts as we view and discuss Silent Running (1972) PG. 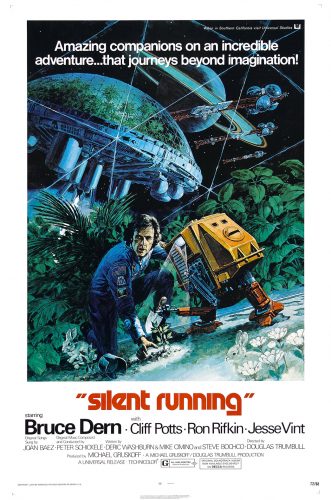 Widely considered the most influential ecological science fiction film of all time, Silent Running (1972) is a stirring, beautiful, and uncannily prescient depiction of the terrible costs of environmental irresponsibility and the redemptive power of compassion and stewardship. The directorial debut of Douglas Trumbull, best known for his innovative special effects in films such as 2001: A Space Odyssey (1968), Close Encounters of the Third Kind (1977), Blade Runner (1982), and The Tree of Life (2011), the film is celebrated for its practical effects, a career-making performance by actor Bruce Dern as space botanist Freeman Lowell, and its endearing, anti-ableist portrayal of Lowell’s robot companions Huey, Dewey, and Louie. Featuring a haunting score by composer Peter Schickele and two original songs by American folk singer Joan Baez, Silent Running is an unforgettable vision of a way forward in a time of environmental calamity.

In commemoration of the fiftieth anniversary of the film’s release, join us for a FREE screening in partnership with Imagining Climate Change and the George A. Smathers Libraries of the University of Florida. The screening will be accompanied by a roundtable discussion by Museum staff members and UF faculty with noted expertise in science fiction film history, disability studies, and extraterrestrial botany. Parental discretion is advised.

The museum will close at 5 p.m. and reopen at 6 p.m. The Museum’s permanent exhibits, except the Discovery Zone, Fantastic Fossils and the Butterfly Rainforest, will be open to the public for extended hours until 9:30 p.m.