The Atala (Eumaeus atala) is a small, velvety-black, tailless hairstreak butterfly found in southeastern Florida. The hindwings below have scattered iridescent blue spots and a large red patch near the red abdomen. The 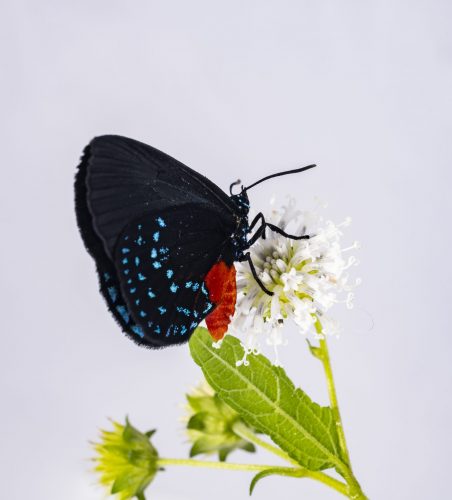 color of the forewings above varies based on sex. Males have extensive iridescent green or blue scaling, while the color in females is limited to a narrow deep blue streak. Although once called the most conspicuous insect in semitropical Florida, the Atala was nearly eliminated from the state due to overharvesting of its only native larval host plant, Coontie (Zamia integrifolia), for starch production by early settlers. In fact, it was thought to be extinct until a small population of the butterfly was discovered on a barrier island in Miami-Dade County in 1979. As far as is known, all current populations originated from that single colony. Today, the butterfly is still rare and has a limited distribution. However, it has expanded into home landscapes, commercial nurseries and botanical gardens where cycads now abound but is almost absent from its historic pine rockland habitat.