Home to the spirits of the forest

The Silk Cotton or Ceiba Tree [Ceiba pentandra (L.) Gaertn.] is one of the largest trees in the American tropics. The tree has played an important role in the spiritual and economic lives of the peoples who live in the circum-Caribbean region. 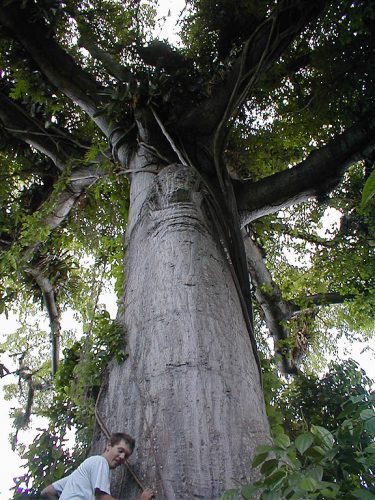 The Ceiba is a rapidly growing deciduous tree that reaches heights of 80 feet or more, and a diameter of five to eight feet above its buttresses. The buttresses themselves can be up to ten feet tall and extend ten feet from the main trunk. The tree has a broad, flat crown of horizontal branches. The leaves are compound with five to eight lance-shaped leaflets that are three to eight inches long. From December to February the tree produces numerous five-part whitish to pink flowers which occur in dense clusters and bloom before the leaves appear.

The tree produces three-to-six-inch long, elliptical fruits. These fruits contain many seeds surrounded by a dense mat of cottony fibers. The tree gets its common name from these fibers which rain from the tree when the fruits ripen. The fibers are almost pure cellulose, buoyant, impervious to water, and have a low thermal conductivity, but they do not lend themselves to spinning. Called Kapok in Asia, the fibers are used for insulation, padding in sleeping bags and life preservers, and for stuffing mattresses and pillows. In Puerto Rico the tree was often planted in the center of plazas for shade, and it is considered a valuable honey tree.

The tree in these photographs is growing on the Sweetwater archaeological site, Paradise Park, Westmoreland, Jamaica. All around the base of the tree there are broken pieces of pottery, shells, and stone from a Taino village that was occupied during the 15th to 16th centuries. Bill Rogers, a forester from Tallahassee, Florida, examined the tree while volunteering on an archaeological research project.

Bill concluded that the tree was now about 85 feet tall, although it had been topped (the top had broken off in a storm sometime in the past). Furthermore, the tree was about 8 feet in diameter above the buttresses, and we measured the width of the tree with buttresses as more than 20 feet at ground level. Bill estimated that the tree is 200 to 300 years old. While working at the site in 2002, a local volunteer noticed that the tree appeared to be smoking. Part of the mythical qualities associated with these trees?

According to Hernandez Aquino (1977), Ceiba (pronounced “sayba”) is a Taino word. Christopher Columbus in 1492, and Gonzalo Fernandez de Oviedo in 1526, were both impressed by the size of the canoes that the Indians in the West Indies and coastal Central and South America made from the Ceiba tree. These canoes (another Taino word) were hollowed out of tree trunks all in one piece. Some were 10 to 12 spans wide (a “span” measures 9 inches or 1/8th of a fathom), and could carry more than 100 men. The wood is exceedingly lightweight (specific gravity = 0.23), and is easily worked. However, because the wood lacks durability and is susceptible to insects and decay, it is not used for other kinds of construction. Dugout canoes, like the one below, are still made today from Ceiba trees.

The Tainos believed that the forest was inhabited by spirits called opías. Opías were the spirits of the dead, and one could identify opías because they lacked navels. They were supposed to come out of the forest at night and feast on guayaba fruit. In fact, it is tropical bats who eat guayaba fruit at night which led the Tainos to associate opías with bats. Opías, as spirits of the dead, are also associated with the deities who ruled the world of the dead. According to Ramón Paní, the Jeronymite friar who was sent by Columbus to study the native mythology, “They say a certain cemí, Opiyelguobirán, had four feet like a dog and is [made] of wood, and often he comes out of the house at night and enters the forests. They go there to seek him and bring him back to the house. They bind him with cords, but he returns to the forests.”

José Juan Arrom suggested that this spirit who constantly sought the woods, where the the opías or spirits of the dead dwelt, served as the daylight guardian. Greek mythology assigned a similar role to Cherberus, the three-headed dog who stood at the river crossing that marked the entrance into the realm of Pluto. In line with Arrom’s conclusions, Antonio Stevens-Arroyo identifies Opiyelguobirán as one of the twins who assist Maquetaurie Guayaba. Maquetaurie Guayaba was the Lord of the Dead, Master of Sweetness and Delight, symbol of the guayaba berry (whose juice produced a black body paint which symbolized death), Lord of Coaybay (“the house and home of the dead”); he was represented by bat symbols.

Opiyelguobirán as Guardian of the Dead and Master of Privacy and Felicity, was the twin of Corocote, Guardian of Sexual Delight, Romance, and Spontaneity, he was a picaresque spirit. However, this is only one of the ways that Opiyelguobirán was represented. As Henry Petitjean Roget points out, “Zemis (or cemíes) are not specific representations but symbolic entities…like many symbols, [they] cannot be reduced to a single interpretation.” Petitjean Roget associates Opiyelguobirán with the discovery of the first wild bee honey. As such, he is a metaphor for the power of the cacique (chief).

Various beliefs in supernatural spirits were brought to the West Indies from Africa by enslaved peoples. It is likely that these beliefs also were influenced in the 16th century by the last remaining native peoples One of the modern words for spirits of the dead in the West Indies — Obeah — may originally have come from the Taino name (see Zombi for another example).

In 1936, Anthropologist Zora Neale Hurston received a Guggenheim Fellowship to study Obeah in the West Indies. She lived in Jamaica from April to September and attended numerous local ceremonies. Jamaicans believe that “duppies” (spirits of the dead) live mostly in silk cotton trees and almond trees. For that reason neither tree should be planted too close to the house because the duppies who live in them will “throw heat” on the people as they come and go. Duppies are responsible for various kinds of mischief and can hurt a living person such that medicinal cures (including “balm baths”) must be sought from local healers who serve as both “doctor and priest.” 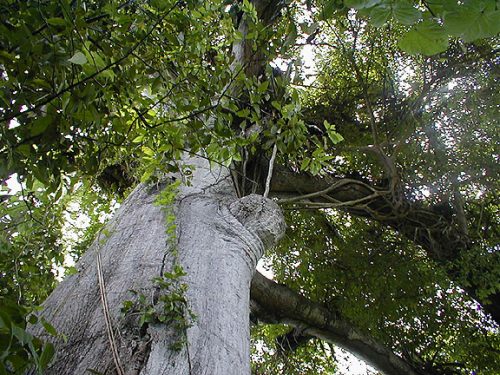 We should keep in mind that while modern Jamaicans recognize that belief in duppies is a part of their heritage, the practices associated with these beliefs have faded with time. To find a more complete image of duppies we must look to the past. In this regard, Hurston’s (1938, pp. 43-44) observations during a “nine night” ceremony (so named because it lasted nine nights), which takes place after a person dies, are instructive: “It all stems from the firm belief in survival after death. Or rather that there is no death. Activities are merely changed from one condition to the other. One old man smoking jackass rope tobacco said to me in explanation: ‘One day you see a man walking the road, the next day you come to his yard and find him dead. Him don’t walk, him don’t talk again. He is still and silent and does none of the things that he used to do. But you look upon him and you see that he has all the parts that the living have. Why is it that he cannot do what the living do? It is because the thing that gave power to these parts is no longer there. That is the duppy, and that is the most powerful part of any man. Everybody has evil in them, and when a man is alive, the heart and the brain controls him and he will not abandon himself to many evil things. But when the duppy leaves the body, it no longer has anything to restrain it and it will do more terrible things than any man ever dreamed of. It is not good for a duppy to stay among living folk. The duppy is much too powerful and is apt to hurt people all the time. So we make nine night to force the duppy to stay in his grave.'”

Stevens-Arroyo, Antonio (1988). Cave of the Jagua: The Mythological World of the Tainos, University of New Mexico Press, Alburquerque.