Welcome to the World’s Largest Occupied Bat Houses. The two University of Florida Bat Barns and Bat House, far right, are located on the north side of Museum Road across from Lake Alice on the UF campus. 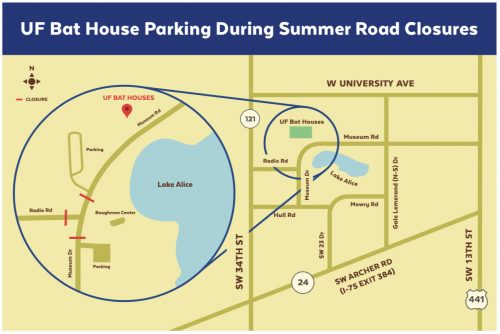 About the evening emergence

The bats normally emerge during a 15- to 20-minute period after sunset, before total darkness on calm, warm evenings when temperatures are above 65 F. Bats may swoop near those observing the emergence to eat insects attracted to the carbon dioxide in human breath, however they will not attack or harm people when left alone. High winds, heavy rain or cold temperatures will keep the bats in the house for the evening. On warm winter evenings, the bats may come out for a drink of water at the lake and exercise; however they can eat only when bugs are flying.

The best seasons for observing the emergence are spring through early summer, when days are increasing in length. During this time, the bats emerge sooner after sunset while there is a longer period of twilight. To gain the best perspective of the bats’ emergence, watch the western sky over the pine trees and around the street lights on Museum Road. The shadows from the trees north of the house obscure the view of the bats’ emergence.

Important things to remember when observing the bats

Bats are designated by Florida Statutes Chapter 372 as “Non-Game Wildlife” and their habitat must not be molested or disturbed by humans.

When fire destroyed UF’s Johnson Hall in 1987, a colony of bats occupying the attic of the historic building was left homeless and soon inhabited the concrete bleachers of James G. Pressly Stadium at the track and Scott Linder Tennis Stadium on the north side of campus. The odor and stains from urine and guano and the bats’ close proximity to spectators were a nuisance, so the UAA decided to exclude the bats from those facilities and build a structure for them to live undisturbed and at a safe distance from humans. In September 1991, several thousand bats were captured from the stadiums, transported and released in the Bat House. The following evening, the bats emerged and found other places to live, while the Bat House sat vacant for more than three years, leaving UF officials and many citizens in doubt about the success of the relocation project.

But in 1995 the bats moved in permanently, and the colony continued to grow. In 2009, the internal structure of the house collapsed from the weight of the bats and additional roosting modules that were added to the original design. The internal structure of the house was rebuilt and the first Bat Barn added in 2010. The second Bat Barn was completed in February 2017 to replace the original Bat House, which has deteriorated beyond repair. UF plans to remove the original Bat House at a future date.

Bats are wild mammals and do carry rabies, however rabies only occurs in about .5 percent (1 in 200) of the bats in a population. For comparison, rabies in wild raccoons can occur at up to 35 percent (1 in 3.)

Unlike other mammals, rabid bats do not show aggression, but are more likely to be found on the ground, sluggish and easy for children to pick up. Children must be warned to NEVER touch any bat, because bats found on the ground are much more likely to be rabies-positive and may bite in self-defense. Instead, have an adult notify a trained professional with protective gear and pre-exposure rabies vaccinations to handle or remove bats. If a bat must be removed by an untrained adult, use a coffee can with a piece of stiff cardboard. Place the can over the bat and gently slide the cardboard under the can, trapping the bat inside without touching it, or use heavy leather gloves.