by Natalie van Hoose • February 27, 2020
Florida State University ecologist Dean Grubbs pulls in a blacktip shark that will be quickly measured and tagged before being released back into the Gulf of Mexico. Florida Museum photo by Kristen Grace

Last summer, the University of Florida and Florida State University set aside their longstanding rivalry to offer students a unique opportunity – a sharks field course.

For two weeks, 10 undergraduate and graduate students roared across the Gulf of Mexico by day and bunked at research stations by night. They caught, tagged and released sharks and rays, dissected specimens and fanned themselves in an un-air-conditioned trailer as they studied the animals’ intricate family tree.

The course was created by two shark experts and longtime collaborators, each with decades of experience: Gavin Naylor, director of the Florida Program for Shark Research at the Florida Museum of Natural History, and Dean Grubbs, associate director of research at FSU’s Coastal and Marine Laboratory. 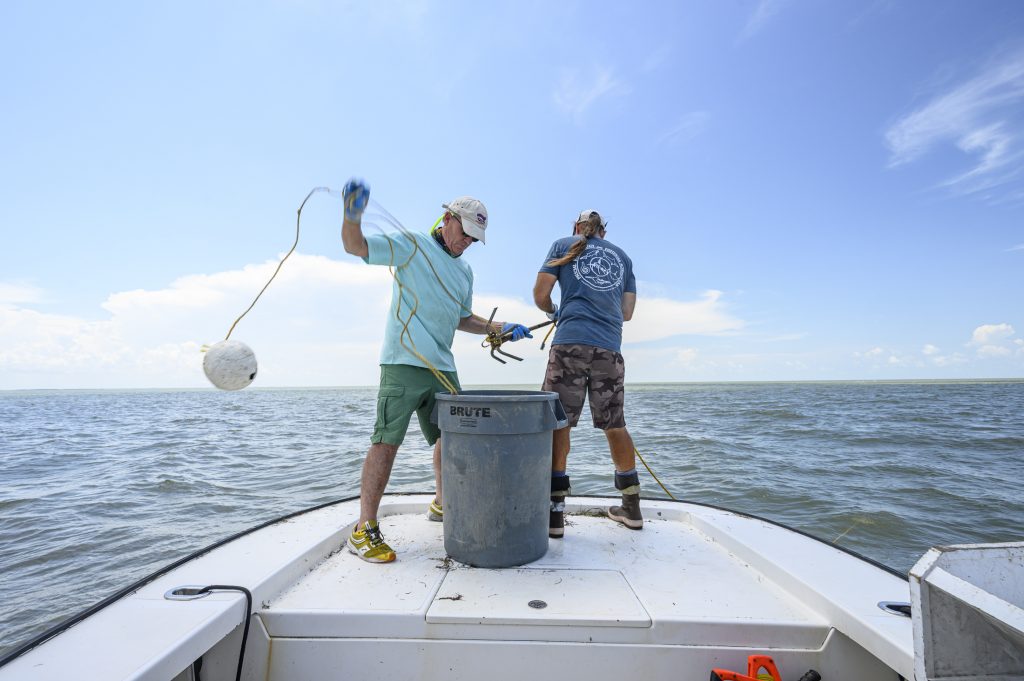 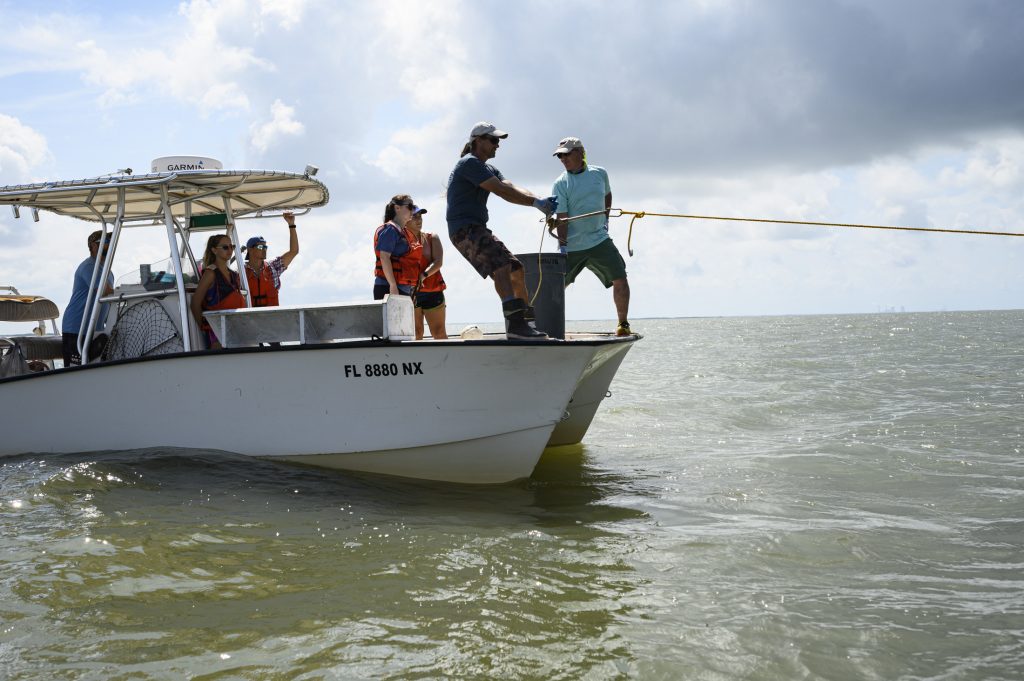 Grubbs and Naylor pull in a net. While the shark experts have been friends and collaborators for decades, this was the first time they taught a course together. 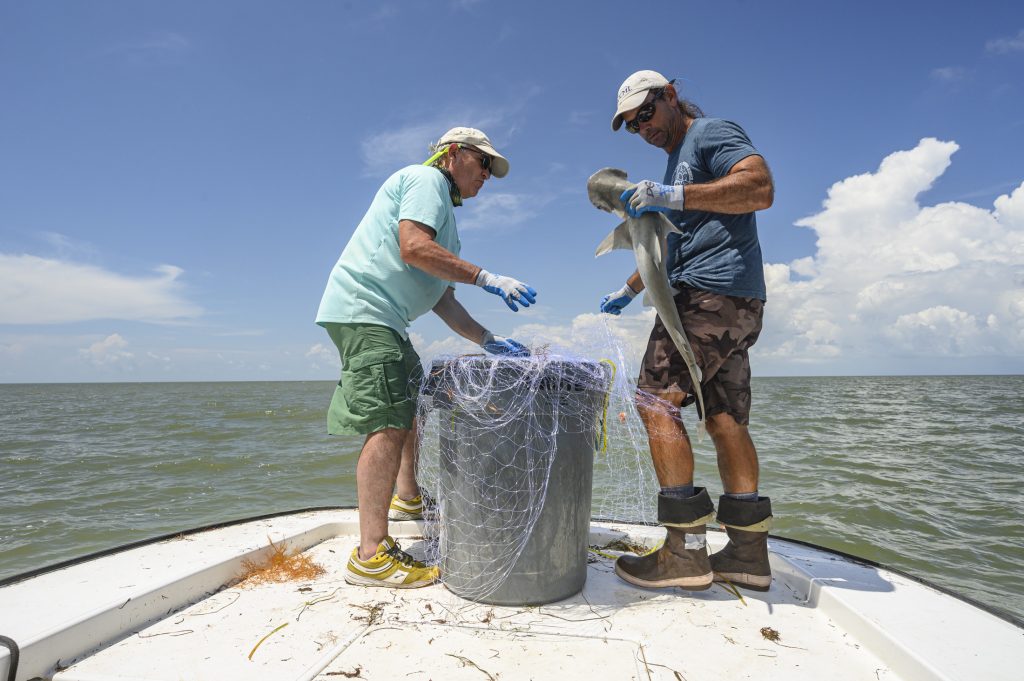 Grubbs removes a bonnethead shark from the net. The team’s goal is to measure, tag and collect tissue samples from sharks in less than 45 seconds so the animals can be returned to the water as quickly as possible. 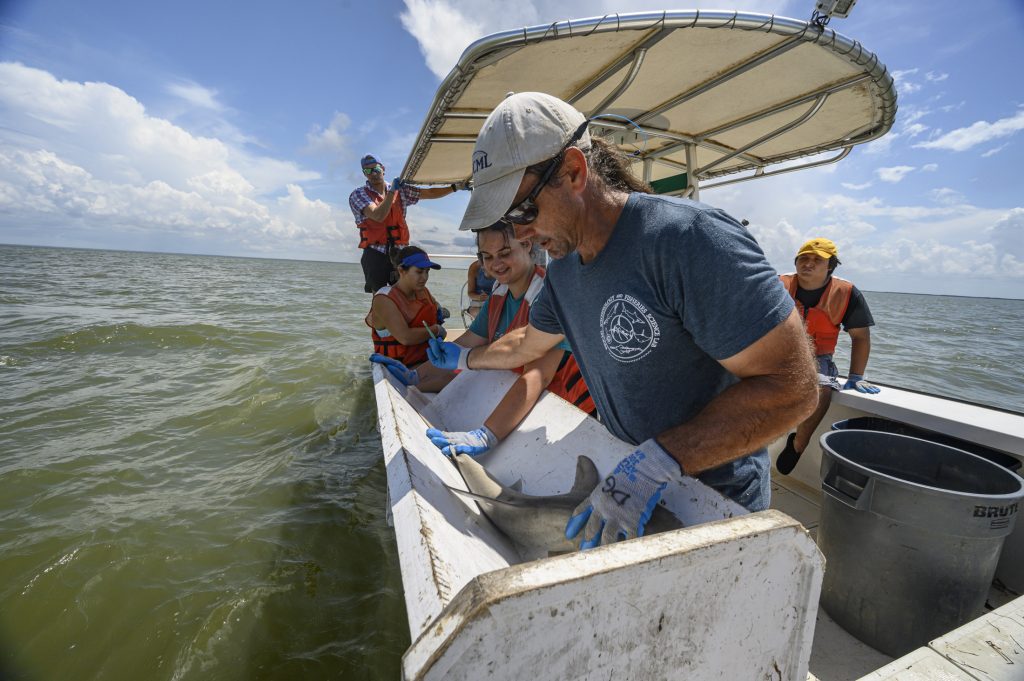 Grubbs measures a shark while handing off a tissue sample to UF student Becky Messcher. 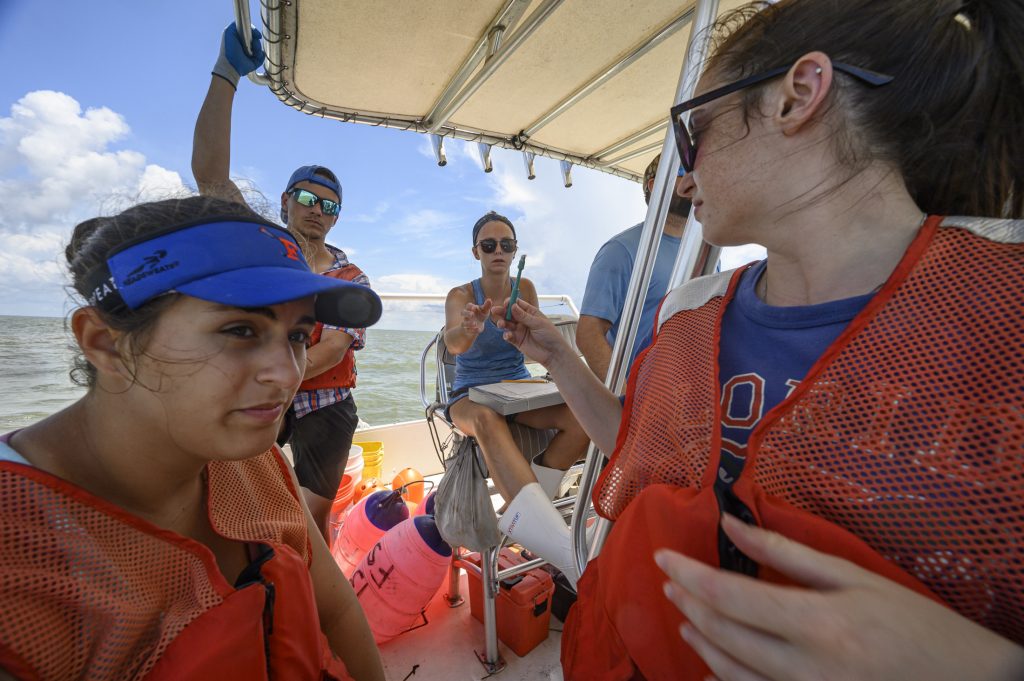 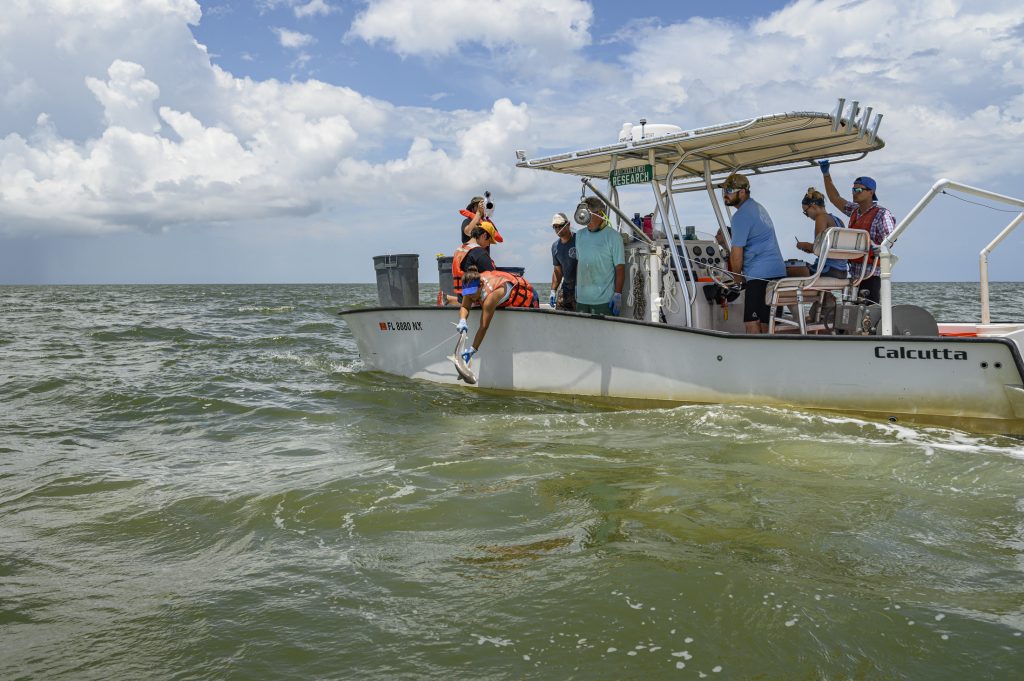 Naylor, an evolutionary biologist, and Grubbs, an ecologist, envisioned a class that brought what students learned from textbooks and the lab to life via immersive field and research experiences with sharks and rays.

“The students get to see all of the ecosystems along the Gulf Coast of Florida and experience a wider variety of shark subjects than they can in just about any course in the world,” Grubbs said. “These resources you can’t get anywhere else.”

The students spent the first week in St. Teresa at the FSU Coastal and Marine Lab and the second at Seahorse Key, a small barrier island off Cedar Key, which boasts “probably one of the least-impacted coastlines in the entire U.S.,” Naylor said.

“We can find things here that are reminiscent of the coastline hundreds of years ago,” he said.

Becky Messcher, a UF marine sciences major, admitted to being a little nervous on the first trip out to the Gulf, where the group set long lines and nets to capture sharks for tagging. Previously, Messcher’s closest encounter with sharks and rays was at a touch tank at an aquarium, but she soon found herself helping tag and release an 8-foot male nurse shark.

“Pictures and videos don’t do these organisms justice,” she said. “They’re stunning.”

By the second week, Grubbs was passing small blacktips to Messcher who handled them like a seasoned pro. The team quickly measured, tagged and took a small tissue sample from the sharks before slipping them back into the water. The data contribute to a Gulf Coast monitoring effort led by Grubbs’ lab.

“The students can see how research projects actually develop and how this information is used in conservation,” Grubbs said. “Everything we say to them in the classroom gets driven home.”

Cody Conrad, a student in the UF online biology program, said he has loved sharks for as long as he can remember. Having read Naylor’s and Grubbs’ research papers, he jumped at the opportunity to study with them.

“It was a no-brainer to take this class,” he said, showing off the bite mechanics of a mako shark jaw he dissected. 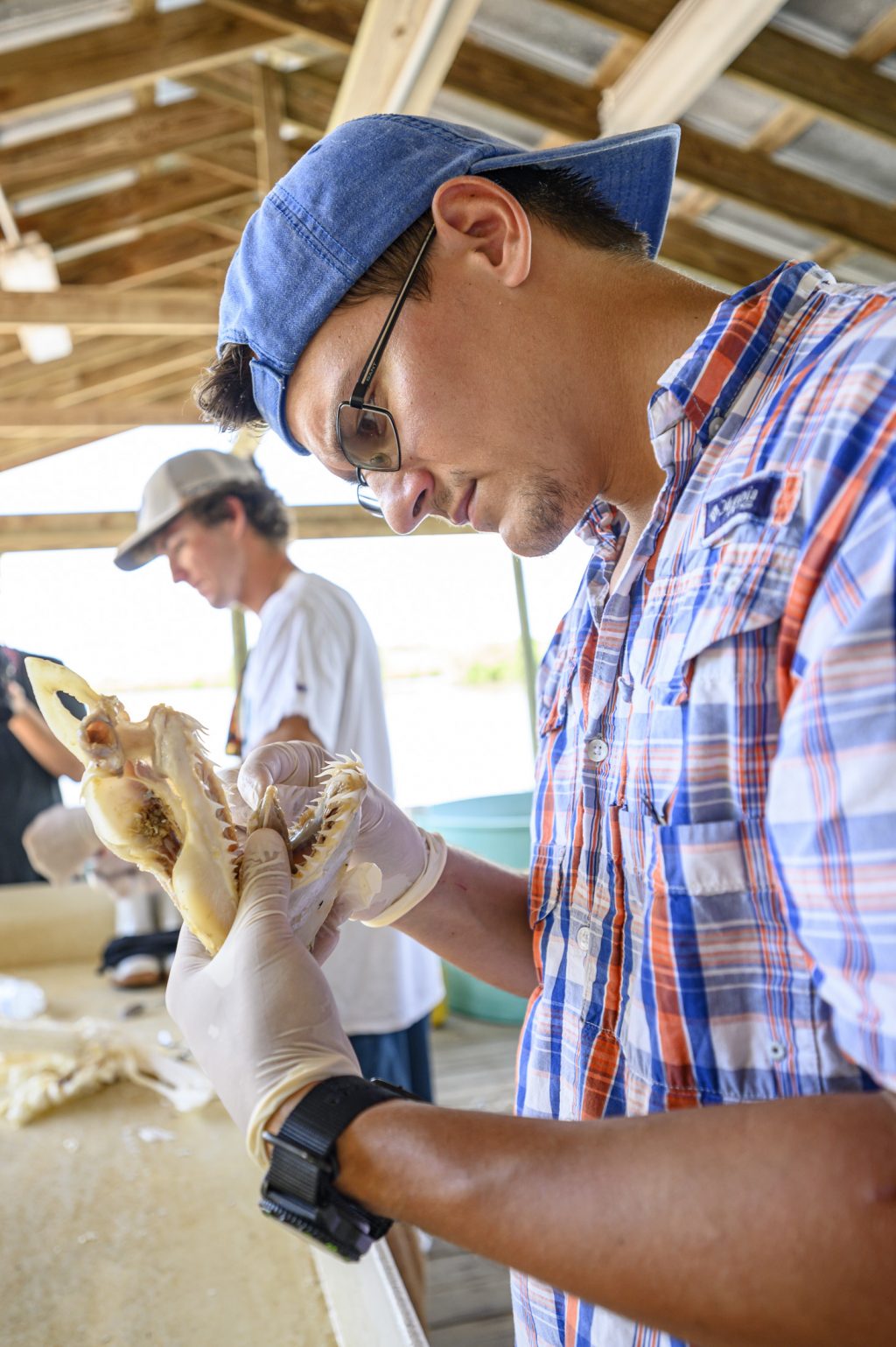 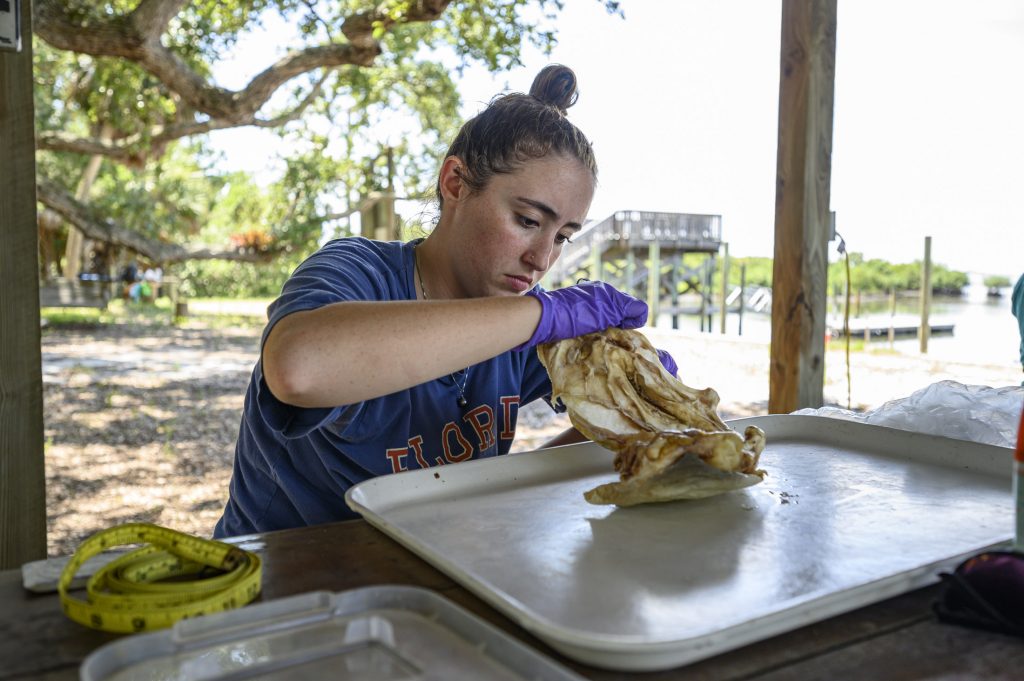 Walker removes flesh from a shark jaw to expose the cartilage. 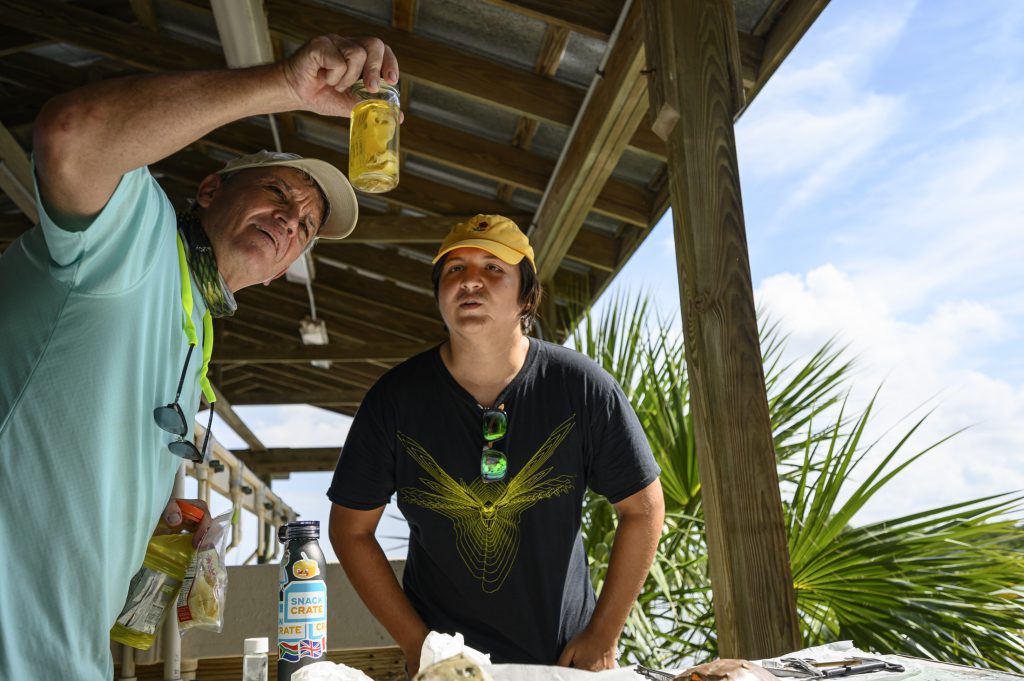 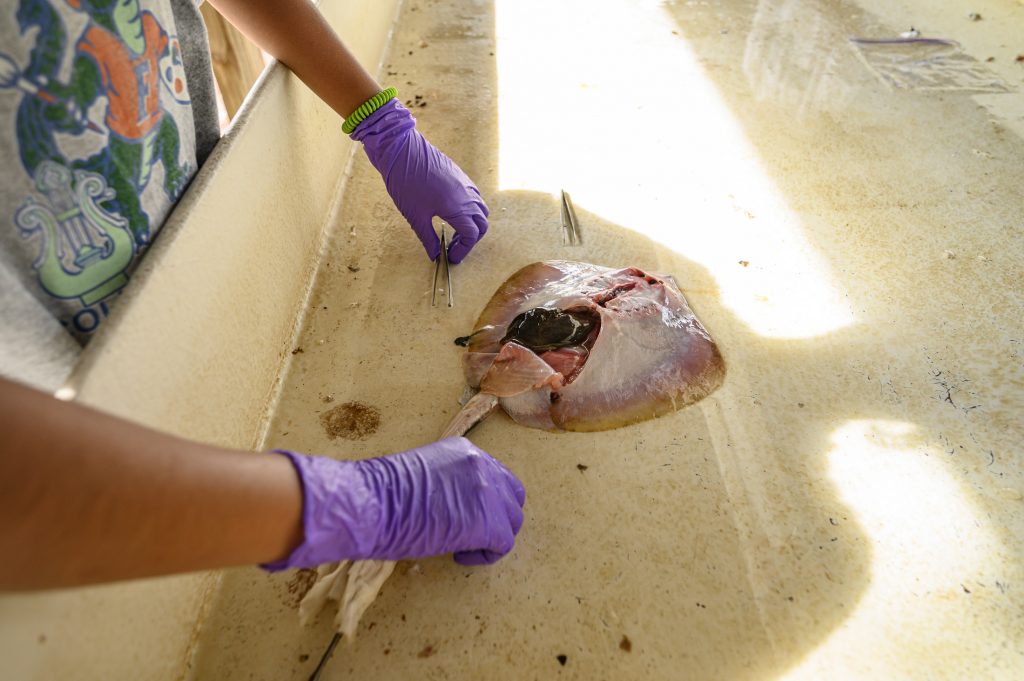 Adrina Perez, a UF wildlife ecology and conservation major, said the course would help prepare her for a future career working in estuaries and other coastal marine systems by teaching her a variety of tagging and tracking methods. Perez, tasked with dissecting an Atlantic stingray, was carefully stripping away muscle to reveal the ray’s cartilage as Naylor pointed out the animal’s crosscurrent exchange of blood and water.

Traditionally, students learn about an organism’s systems – muscles, skeleton, respiratory and circulatory systems – one by one. But with dissection, “you can see how everything interacts and works together, and that’s really fascinating,” Perez said.

But Perez had to momentarily abandon her scalpel, as the class sprinted to the key’s shoreline where a shark had reportedly gotten stuck in the shallow water.

No, the instructors told them, that’s not a beached shark. A pair of nurse sharks twisted and turned in an elaborate mating dance, a phenomenon Naylor had never witnessed.

“This is really a magical place,” he said. 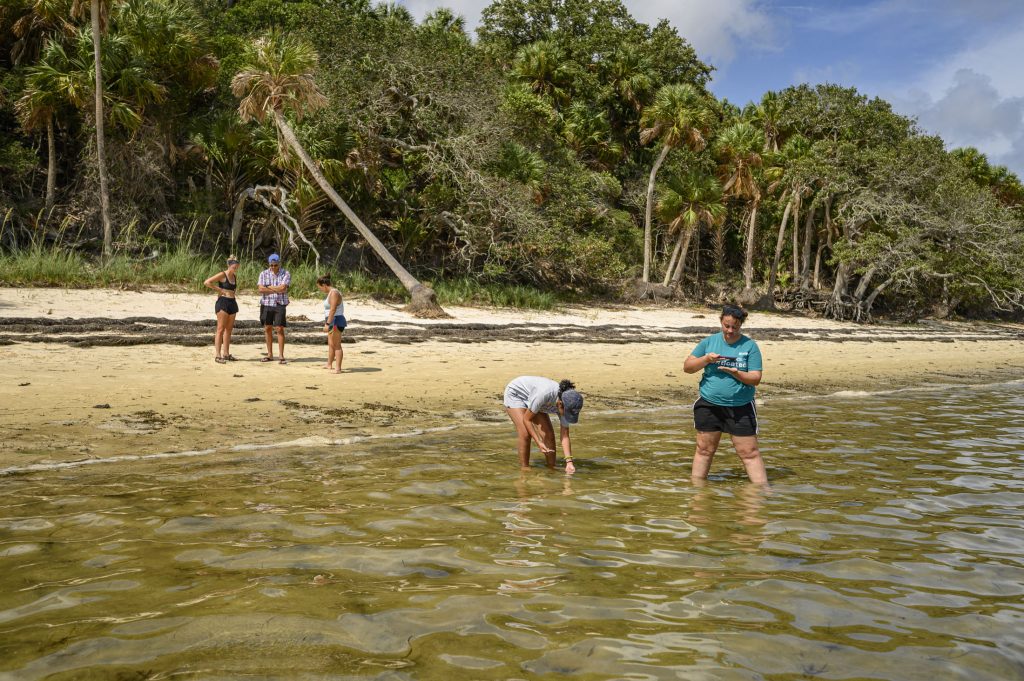 Perez and Messcher look for horseshoe crabs in the shallows of Seahorse Key, a small barrier island where the students spend the second half of the course. 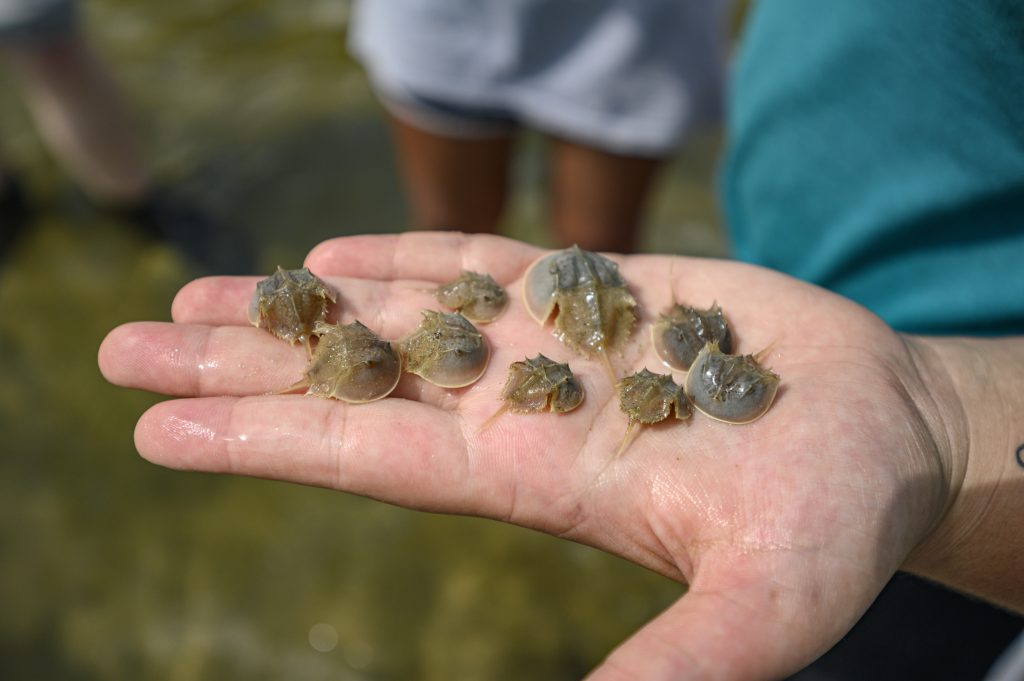 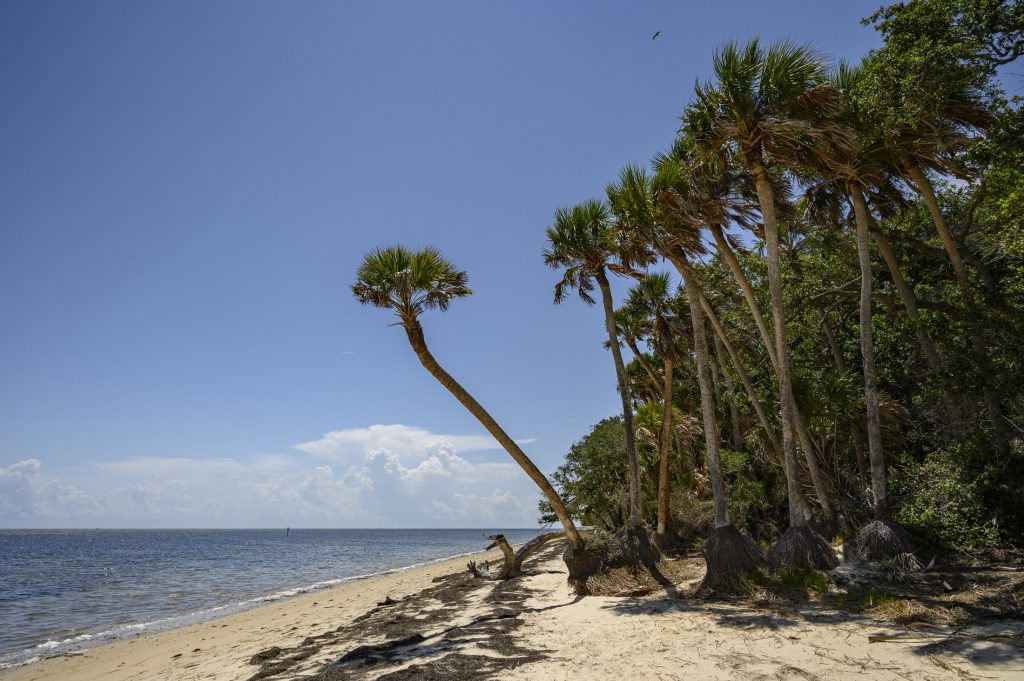 The Cedar Key region is ideal for studying sharks because “it’s relatively unspoiled,” Naylor said. A variety of sharks live around the keys, and a pupping ground for blacktip sharks is about 6 miles away. 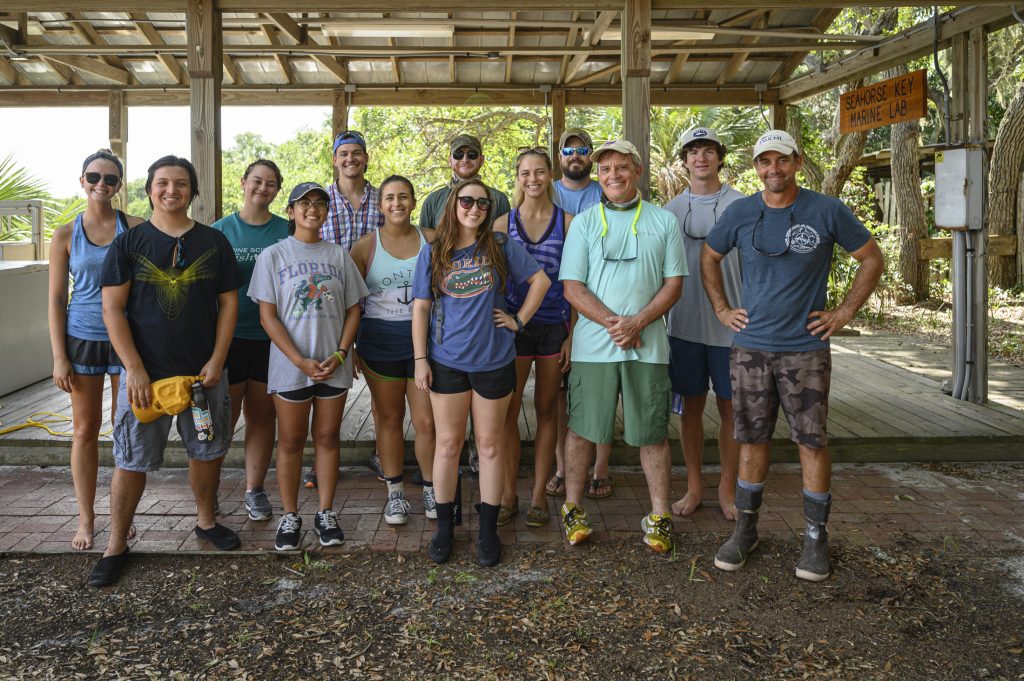 After a successful first year, Naylor and Grubbs hope to offer a Florida sharks field course annually. The second course will begin May 31.

Editor’s note: The 2020 sharks and rays course has been canceled.