The first appearance of bright green leaves heralds the start of spring, nudging insects, birds and other animals into a whirlwind of action. But a new study shows that urbanization shifts this seasonal cue in nuanced ways, with cities in cold climates triggering earlier spring plant growth and cities in warm climates delaying it.

“That was not what we expected,” said Daijiang Li, the study’s lead author and a research scientist at the Florida Museum of the Natural History and the University of Florida department of wildlife ecology and conservation. “We know plants need a signal, a notable change in temperature, to produce leaves. Perhaps in warmer areas, that signal is erased.”

The study also found that the urban heat island effect, the phenomenon in which cities are warmer than their surroundings, is not the only culprit behind the shift, suggesting that other aspects of urbanization, such as pollution, changes in humidity and fertilizer runoff, may also influence plants’ seasonal patterns.

Changes in the timing of spring leaves and flowers could set off a cascade of effects, threatening species’ wellbeing, disrupting agriculture and potentially causing longer or more severe allergy seasons, said Robert Guralnick, the study’s senior author and curator of informatics at the Florida Museum.

“Seasonality of plants and animals is where we’re probably going to see the first impacts of large-scale climate change,” Guralnick said. “These are often the most immediate and visible responses to environmental changes and can be canaries in the coal mine for shifts that radiate across an ecosystem.”

Plants are extremely sensitive to changes in temperature and rainfall, which can be driven by climate change and cities’ microclimates. As plants’ delicate clockwork is disrupted, the rhythms of predator-prey and pollinator-plant fall out of sync, Guralnick said.

Researchers analyzed millions of observations of 136 plant species across the U.S. and Europe to study how regional temperature and the local density of people – a proxy for urbanization – affect when plants sprout leaves and blossoms.

Their results revealed a complex story: Separately, warmer temperatures and higher population density each spurred earlier springs. A 3.6-degree Fahrenheit increase in temperature bumped up plants’ production of leaves and flowers by about five and six days, respectively. A fourfold increase in human population density advanced flowering and leaf production dates by about three days.

But the team found that when these two factors worked together, local temperature had an outsized influence.

In cold regions – areas with an average November-to-May temperature of about 18 degrees – plants produced leaves and flowers about 20 days earlier in locations with about 26,000 people per square mile, compared with equally frigid wildland.

When an area’s average November-to-May temperature jumped to 68, however, leaves and flowers appeared four and six days later, respectively, in locations with about 26,000 people per square mile, compared with equally balmy wildland.

In New York, for example, plants are likely sprouting leaves about 9.5 days earlier and blossoms eight days earlier than uninhabited regions with the same temperature. Jacksonville, in contrast, is likely pushing leaf production later by about one day and flowers by about half a day, with leaves appearing two days later and flowers a day later in Houston.

“Not only are there other things going on, but they actually matter quite a lot,” said study co-author Brian Stucky, Florida Museum research scientist.

Guralnick added that “One of the dangers of using cities as models to predict what a warmer world under climate change will look like is that it’s not always just about the warming.”

The team also found that plants’ response to changes in temperature and urbanization differed by species. The most sensitive plants tended to be shorter plants with broad, thin leaves, such as the wood lily, Trillium grandiflorum. Plants with early flowering or leaf-out dates, such as the Virginia springbeauty, Claytonia virginica, were also more affected than plants that sprout and bloom later, such as creeping dogwood, Cornus canadensis. 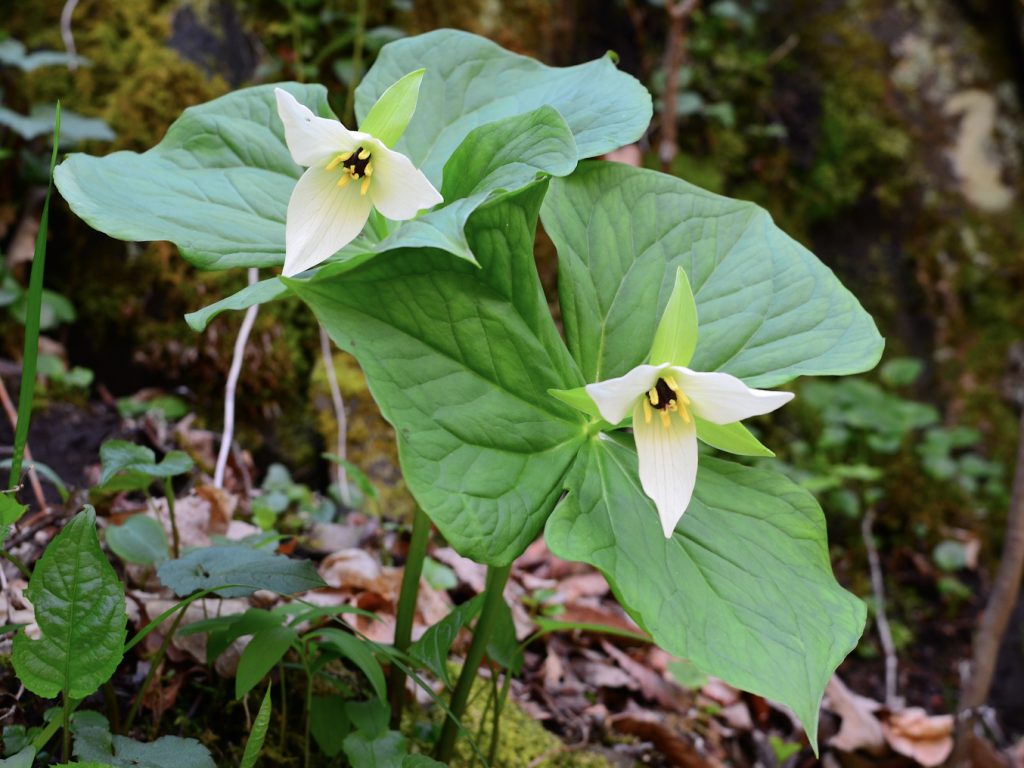 Plants’ sensitivity to changes in temperature and urbanization vary by species, with the most affected plants tending to be short species with broad, thin leaves, such as the wake robin, Trillium erectum. 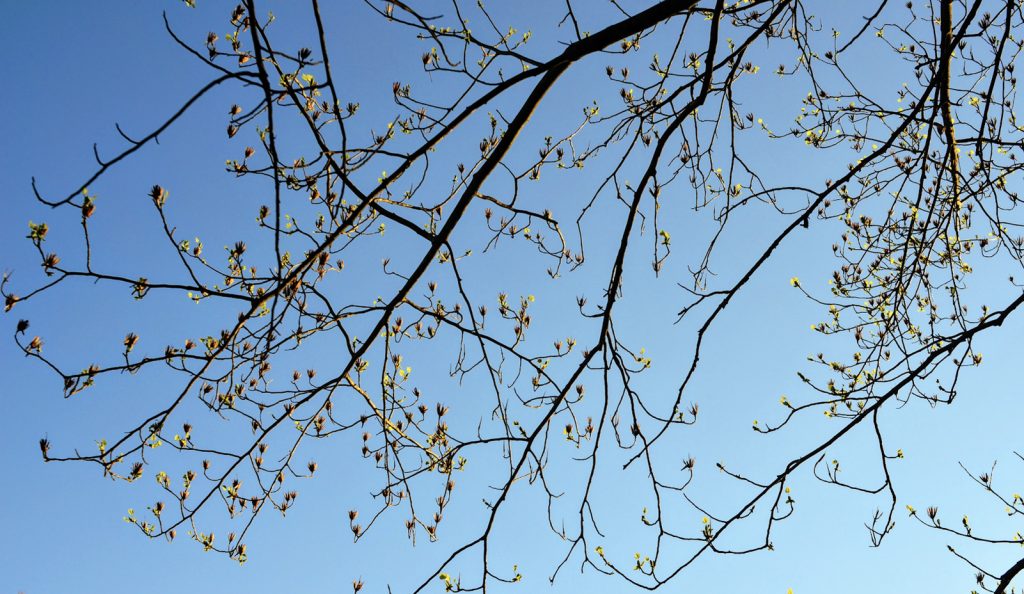 Even though both are tall species, the tulip tree, Liriodendron tulipifera, is more sensitive to urbanization and temperature change compared with the white oak, Quercus alba, due to its large, thin leaves. Here, a tulip tree sprouts its first leaves of the year.

The researchers noted that closely related plants generally produced leaves and flowers on similar timelines, but these similarities were erased by urbanization and changes in regional temperature.

“That makes prediction for the future harder,” Li said.

Many previous studies pointed to the urban heat island effect as the main culprit behind shifts in the seasonal patterns of plants. But these studies often relied on remote sensing data, which only capture what’s happening in the plant canopy, or local observations of a few species, which don’t show broad scale patterns of seasonal change, Guralnick said.

“They didn’t have the species-level data to pick apart what’s happening to different species on the ground,” he said. “The question is whether we can look at what’s happening in everyone’s backyard at once. The real power of this study is that we can actually do that.”

The team used three continental-level monitoring programs, the National Phenology Network and the National Ecological Observatory Network based in the U.S. and the European Plant Phenology Network, for the analysis. There was just one hitch: The programs, which contain more than 22 million data points, essentially speak different languages. Where U.S. monitoring networks use a specific set of terms to record whether a plant has flowers, fruits and so forth, the European network uses a numerical scale.

That’s where Stucky comes in. Stucky’s specialty is reconciling massive sets of data that aren’t compatible. He designed a data de-tangler, a system that used automated reasoning to merge the datasets and present the information in a uniform way.

“When you have large-scale datasets, you can start looking at gradients, instead of binaries,” Stucky said.

One key area for future research is studying how suburbs and exurbs – areas just outside city suburbs – affect plants’ seasonal growth. While impacts may be strongest in heavily urbanized areas, suburbs and exurbs can still skew the timing of spring, and these areas already account for a significant portion of land area in the U.S., Li said.

“These are where the effects are probably going to be the most important because they cover the most land area,” he said. “There’s not much truly urbanized land in the U.S.”

Analyzing these effects in the tropics, where humidity and rainfall may be more important drivers, may also tell a different story than this study, which focused on temperate and subtropical regions, Guralnick said.

Plants may not be the only organisms affected by seasonal shifts, he added.

“Seasons are such a big part of our lives. We define our world around seasonal things. When those rhythms are disrupted, maybe there is some impact on our wellbeing. Those rhythms are what we think of as the normal way the world works.”

The researchers published their findings in Nature Ecology and Evolution.

Benjamin Baiser of UF’s department of wildlife ecology and conservation and John Deck of the Berkeley Natural History Museums at the University of California, Berkeley also co-authored the study.

Funding from the National Science Foundation and the U.S. Geological Survey supported the research.