In November 2019, visitors to Joshua Tree National Park in California encountered a strange sight. Joshua trees and closely related Mojave yuccas, which normally remain reproductively dormant until late spring, were in full bloom at the tail end of autumn.

In a new study, researchers at the Florida Museum of Natural History used citizen-science data to determine the cause of the anomalous bloom and predict when similar events might occur.

As climate change alters weather and environmental patterns, plants respond by producing leaves and flowers earlier in the year, losing them later and shifting their ranges. Monitoring and understanding these large-scale patterns is a lot like taking the planet’s pulse.

“It helps us understand what drives flowering time and how that might be impacted by future climate change,” said lead author Laura Brenskelle, a doctoral student at the Florida Museum. “The whole duration for plants that bloom in warmer weather is just getting longer. It’s climate change that you can see.”

Little is known about which environmental conditions trigger flowering in Joshua trees, Yucca brevifolia, and Mojave yuccas, Yucca schidigera. But with the advent of citizen-science platforms like iNaturalist, scientists have unlimited access to increasingly larger amounts of data that allow them to study global biodiversity patterns, for which Joshua trees are especially well-suited.

As one of the most culturally recognizable plants in the American Southwest, they’re often visited by naturalists eager to photograph the trees, which have slim, spindly branches sheathed in an imposing layer of plated spines. And most importantly for Brenskelle, the flowers are often the focus of attention.

Every year, Joshua trees produce succulent clusters of milky white flowers arranged in a rosette. Resembling a pagoda and measuring more than a foot in length, these clusters are easy to spot from a distance. As a result, there were thousands of photos uploaded to iNaturalist that documented the onset and ending of the abnormal blooming season. 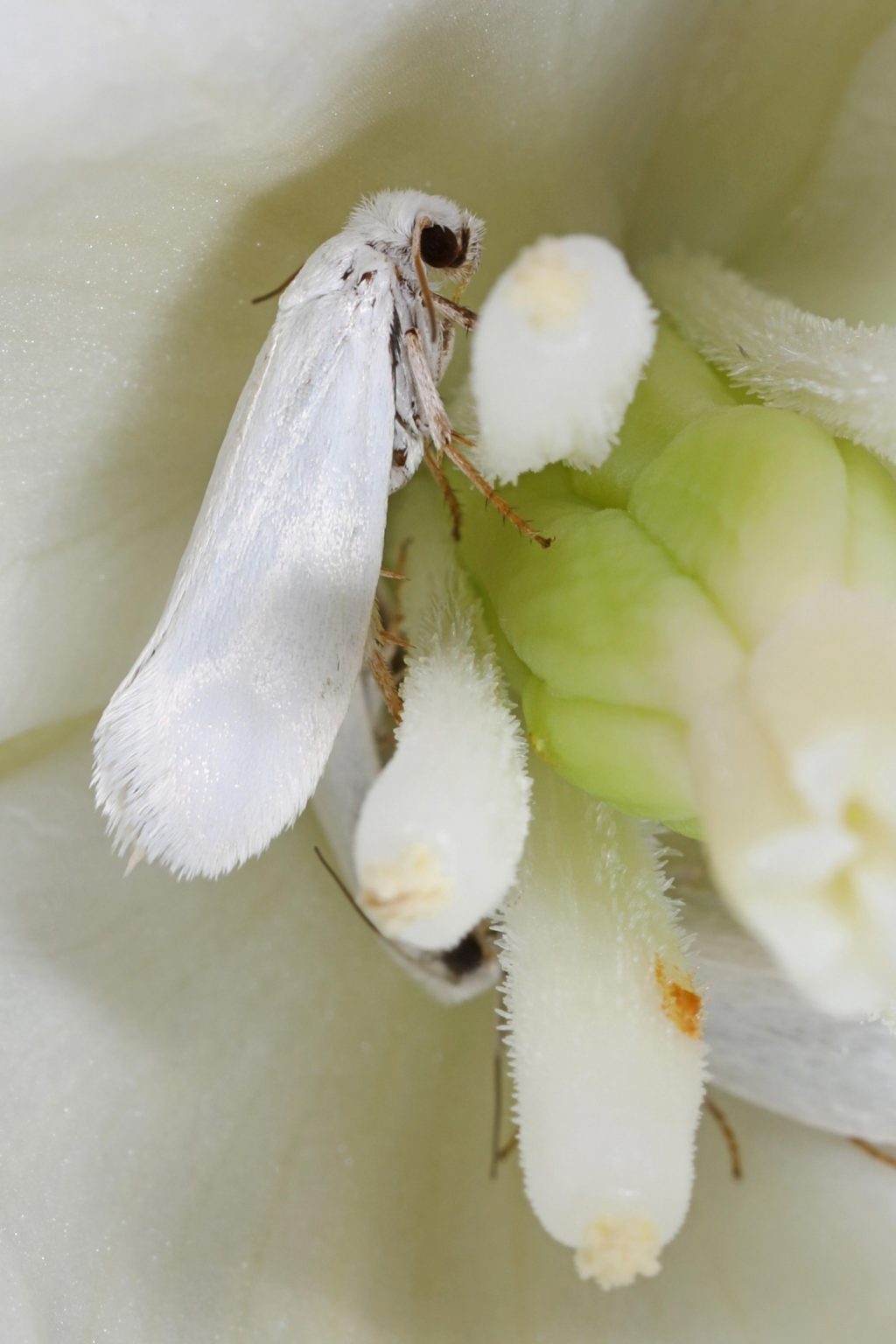 Many yucca species are pollinated by small moths, which rely on the flowers for shelter and use their fruit as incubation chambers for their eggs. 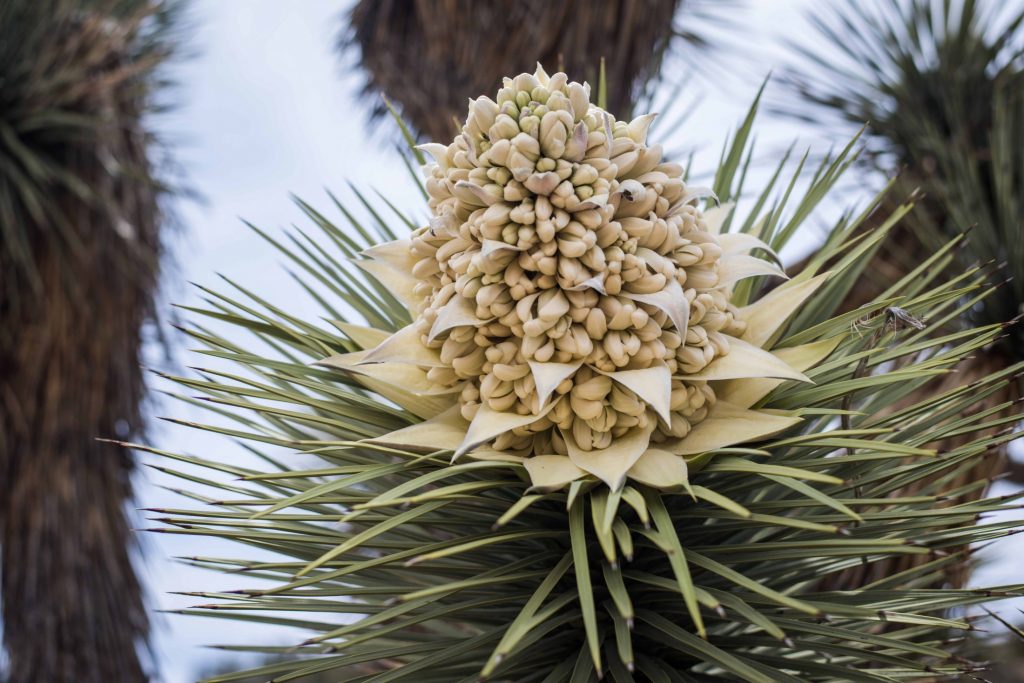 Joshua trees produce multiple flowers in clusters called a panicle that emit a distinct, redolent odor to attract their pollinators. 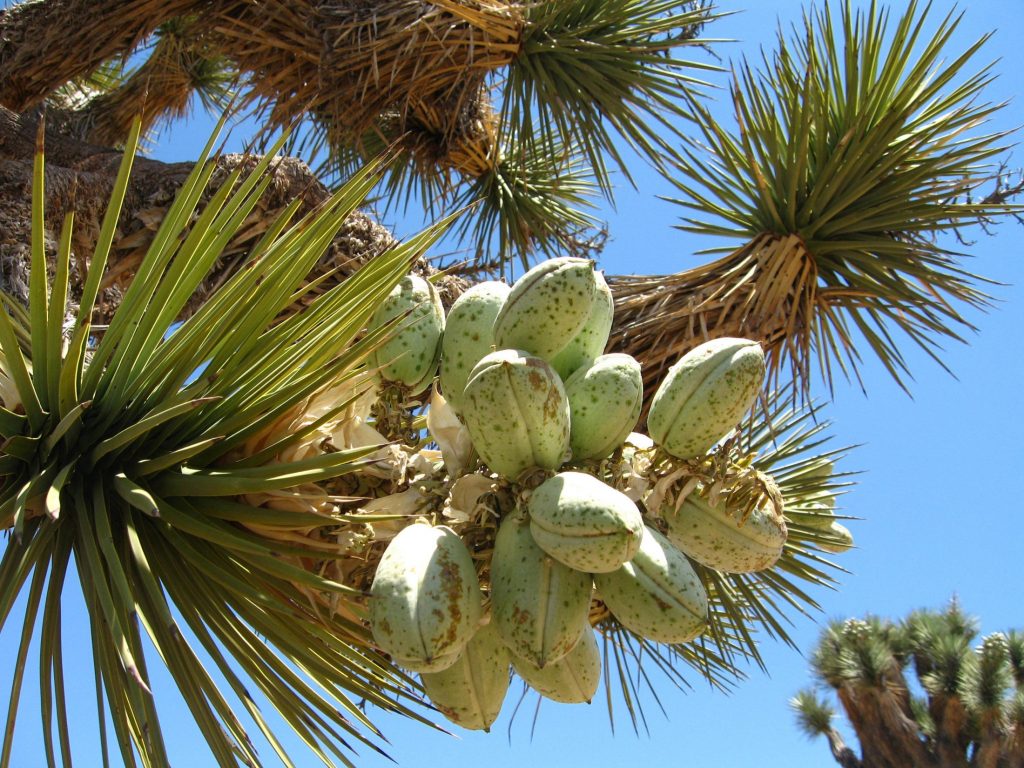 Joshua trees can only produce fruit if their flowers have been pollinated. Each fruit is home to developing yucca moth larvae, which eat a small number of seeds before burrowing their way out.

Brenskelle and her colleagues pored over more than 3,000 photographs of Joshua trees and Mojave yuccas taken between 2009 and 2020, noting if and when each plant had flowers. By combining the GPS coordinates for each photo with environmental data collected by long-term monitoring stations, the researchers assessed which conditions were most closely correlated with flowering time.

Their results indicate there is no single cue that heralds the arrival of flowers for Joshua trees and Mojave yuccas. Instead, their blooming time seemed finely tuned to a complex interaction between temperature, precipitation and the duration of daylight. Both species bloomed in cool, wet conditions early in the year with a few weeks’ difference between them. Mojave yuccas, however, were also observed to bloom later in the year if they had access to enough water.

At the time of the anomalous blooming event, locals pointed to a large storm system that had passed through the region as the likeliest cause.

“It was unusually cold and wet for a portion of October,” said study co-author Rob Guralnick, curator of biodiversity informatics at the Florida Museum. Since the duration of daylight is the same in autumn and spring, the thinking was Joshua trees and Mojave yuccas were “fooled” into flowering early by the arrival of unseasonal rain.

Yet even when all three environmental conditions were combined, they weren’t enough to precisely predict where the two species had bloomed. This may mean that flower development in desert yuccas is governed by a broader and subtler interplay of environmental cues that researchers have yet to uncover, Brenskelle said. “There’s more to the story than what we were able to capture in our model.”

All of this is bad news for Joshua trees, which rely on a single species of nocturnal moth to pollinate their flowers. The moths, which emerge from their chrysalides each spring, lay their eggs inside the flowers, transferring pollen in the process. After the flower is fertilized, the petals drop away, and the eggs are encased within the developing fruit. Once both eggs and fruit have matured, the moth larvae hatch and consume a small number of seeds before burrowing their way out.

The survival of each species is almost entirely dependent on moths and flowers being active at the same time.

“One of the concerns about having these anomalous yucca blooms is whether the same conditions that caused the early flowering also signaled the appearance of adult yucca moths,” Guralnick said. “We don’t think so. That’s bad for the yucca, because their flowers aren’t being pollinated to form fruits and seeds for the next generation of plants, and it’s definitely bad for the moths.”

Scientists warn that Joshua trees may have already started down the path toward extinction. Biologists have noted the establishment of fewer juvenile plants and millions of tree mortalities due to droughts and wildfires. If the current rate of global temperature increase continues, Joshua trees are predicted to disappear from up to 90% of their current range by the turn of the century. 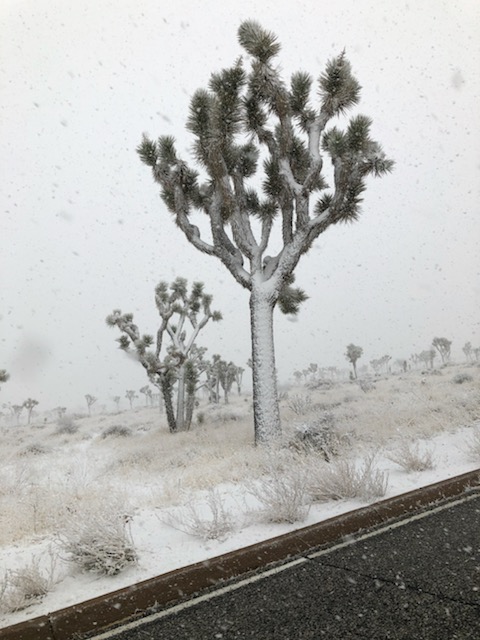 Joshua trees live in one of the harshest environments on Earth, contending with blistering heat, freezing temperatures and droughts. While they are uniquely adapted to the habitats they live in, climate change may be pushing Joshua trees beyond conditions they’re able to withstand. 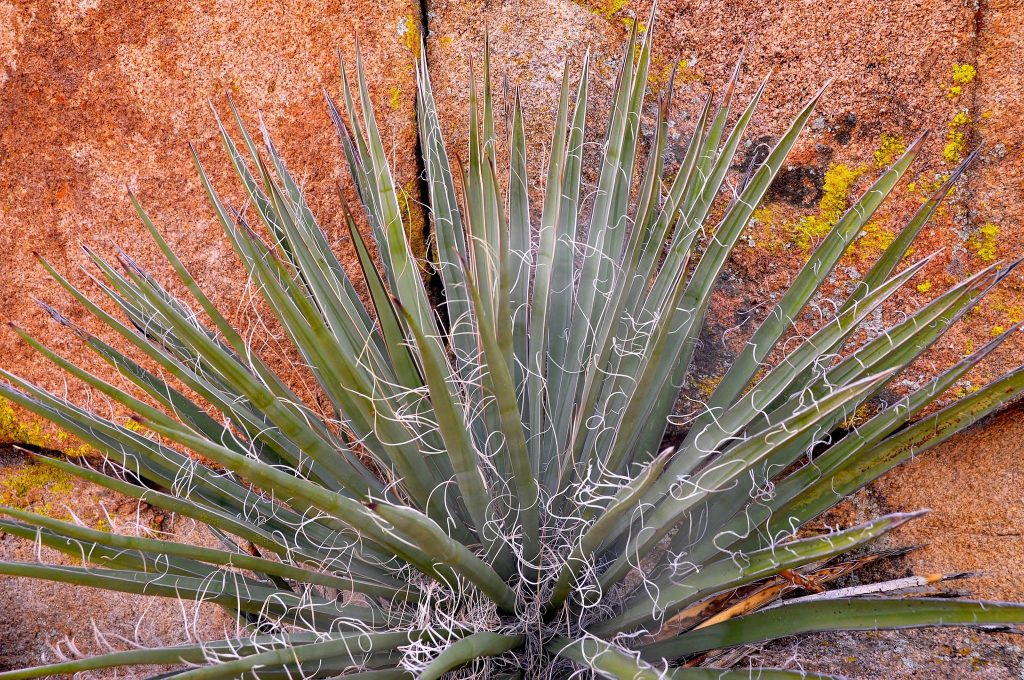 Mojave yuccas, though smaller than their tree-sized relatives, often grow alongside and underneath Joshua trees and are threatened by the same environmental changes occurring across Southwest North America. 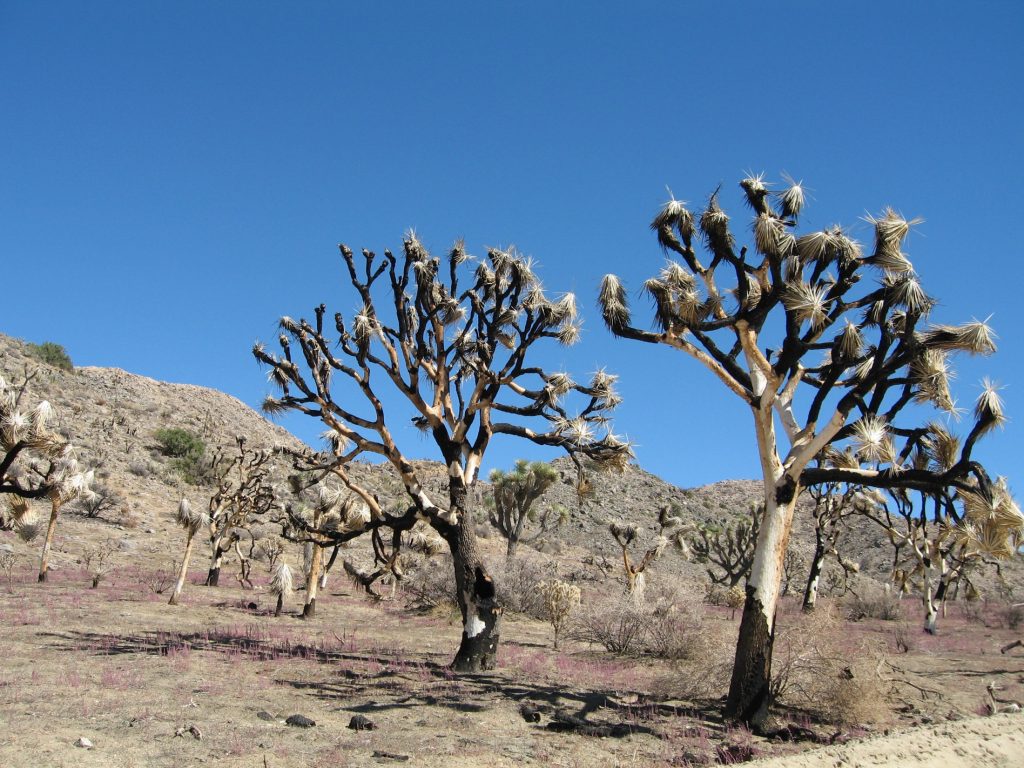 Joshua trees could lose up to 90% of their current range due to climate change. If unseasonal flowering events that are out of step with their pollinators, the trees will be unable to produce fruit and seed to replace dead trees.

With continued climate change, Guralnick worries that unseasonal blooms like the one in 2019 will no longer be out of the ordinary. “It’s more and more likely that these anomalies are not one-offs that happen once in a blue moon. They’re going to be our future.”

Still, Brenskelle and Guralnick are hopeful that studies like these will provide a foundation to inform future research and policy decisions, none of which would be possible without the aid of avid naturalists uploading their photos and observations to online citizen-science platforms.

“There are people who really care about our natural ecosystems, and the fact that people adore and love Joshua trees means that we have a chance to save them,” Guralnick said. “If we know enough about their biology, we have an even a better chance of making the right decisions down the road.”

The researchers published their findings in the Nature journal Scientific Reports.

Brenskelle’s work was partially funded by an assistantship from iDigBio.