by Halle Marchese • September 8, 2020
Florida Museum biologist Zachary Randall and an international team of researchers identified three key pelvic shapes in the hillstream loach family, one of which is suspected to indicate whether a fish could have walking abilities. The resulting family tree is the first to include the cave angel fish, one of the group's most "bizarre" members, Randall said. Florida Museum image by Zachary Randall

An international team of scientists has identified at least 11 species of fish suspected to have land-walking abilities.

The findings are based on CT scans and a new evolutionary map of the hillstream loach family, which includes the only living fish species caught in the act of walking: a rare, blind cavefish known as Cryptotora thamicola, or the cave angel fish. Pinpointing which species of hillstream loaches have walking capabilities can help scientists piece together how the first land-walking vertebrates might have come to be.

In a new study, researchers from the Florida Museum of Natural History, the New Jersey Institute of Technology, Louisiana State University and Maejo University in Thailand analyzed the bone structure of nearly 30 hillstream loach species, describing for the first time three categories of pelvic shapes. Based on the shape of the bone that connects some loaches’ spines to their pelvic fins, the team found that 10 other species of loach shared the cave angel fish’s unusually hefty pelvic girdle.

“Fishes don’t usually have any connection between their spine and pelvic fin,” said biologist Zachary Randall, manager of the Florida Museum’s imaging lab and one of the study’s co-authors. “But before, the idea was that the cave angel fish was totally unique. What’s really cool about this paper is that it shows with high detail that robust pelvic girdles are more common than we thought in the hillstream loach family.”

But not all loaches are so gifted: Though more than 100 species of hillstream loach are found throughout Southeast Asia, the cave angel fish is the only one whose walking capabilities have been observed and studied. Its salamander-like wiggle, powered by enlarged ribs bolstered with stabilizing muscle attachments, was first described in Scientific Reports in 2016 by Brooke Flammang, an assistant professor of biology at NJIT and the study’s lead principal investigator. 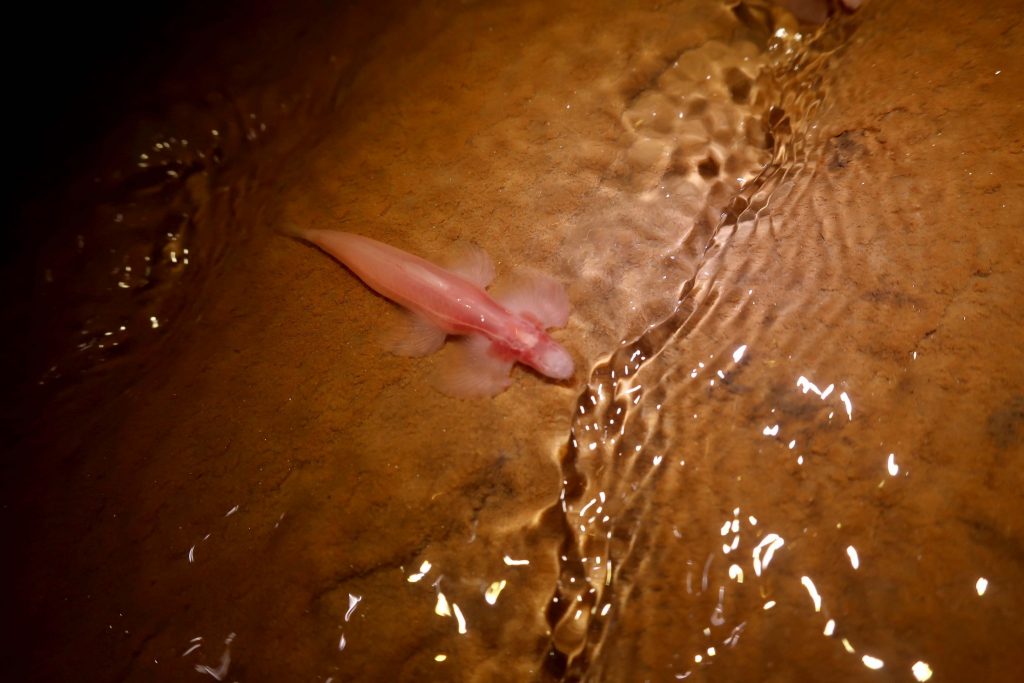 Biologist Zachary Randall and a team of researchers hiked through one of Thailand’s longest caves – crawling in some places and wading through waist-deep water in others – with little more than their headlamps’ glow to guide them. After more than three hours, they came across six cave angel fish in a stream flowing through one of the cave’s chambers. 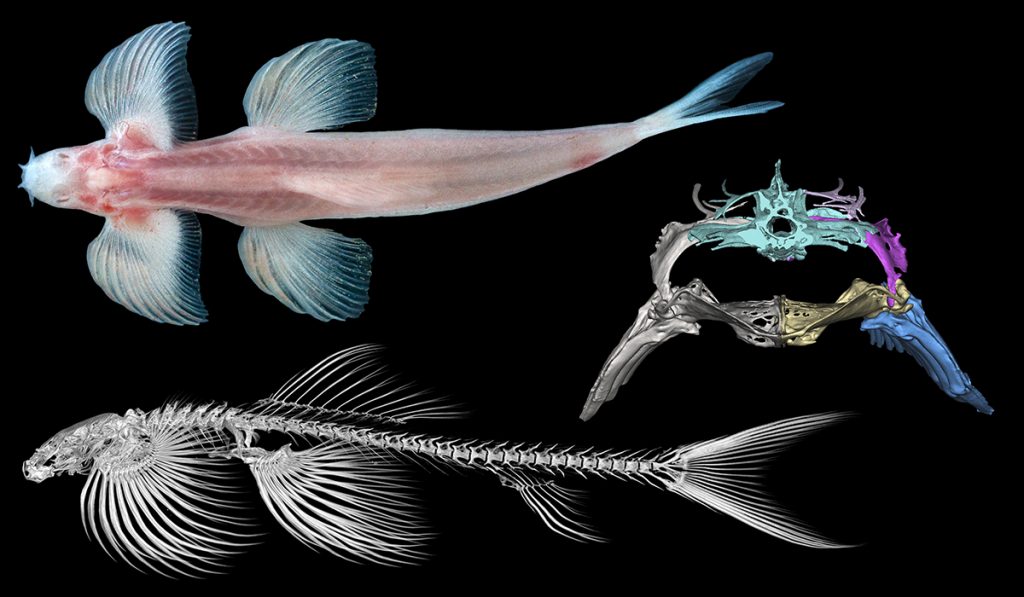 Randall said the cave angel fish’s walk is a key adaptation for surviving fast-flowing cave streams. It can grip rocky streambeds and move between habitats – even up waterfalls – as water levels fluctuate in the dry season. The cave angel fish’s increased mobility could help it access well-oxygenated stream regions with few or no occupants. Still, little is known about the species, including what it eats.

“These loaches have converged on a structural requirement to support terrestrial walking not seen in other fishes,” said study lead author and NJIT Ph.D. candidate Callie Crawford in a statement. “The relationships among these fishes suggest that the ability to adapt to fast-flowing rivers may be what was passed on genetically,” rather than a set of specific physical characteristics.

“Even though the cave angel fish was first described in 1988, this is the first time it’s been included in the hillstream loach family tree,” Randall said. “With our Thai collaborators and using DNA analysis, we were able to use hundreds of genes to trace how pelvic shapes in these fish have evolved over time. Now, we have a much more accurate tree that adds a framework for studying how many species can walk and the extent to which they’re able to.”

“This study brought together a team of researchers with interests and levels of expertise that varied from those of us who do fieldwork and study fishes in their natural habitats to geneticists to comparative anatomists,” added Lawrence Page, Florida Museum curator of fishes and a co-principal investigator of the study. “The result is a greatly improved understanding of the evolution of an extremely uncommon event – the ability of a fish to walk on land.”

Randall and his team most recently observed the cave angel fish on a 2019 cave excursion in northwest Thailand. Given the rarity of spotting a cave angel fish in the field, Randall said the team was surprised to find six of them clinging to the bed of a fast-flowing shallow stream among glittering stalagmites in one of the cave’s chambers. He added that the cave angel fish’s rarity meant that museum specimens and CT data were key to mapping the family’s evolution.

“The beauty of CT scanning is that you can capture different types of high-resolution data without compromising the integrity of the specimen,” Randall said. “For rare species like this one, it even allows you to capture things that are hard to observe in the field, even what it eats.”

The team published its work in the Journal of Morphology.

Prosanta Chakrabarty, curator of fishes at LSU’s Museum of Natural Science, is a co-principal investigator of the study. Pamela Hart of LSU and Apinun Suvarnaraksha of Maejo University are also co-authors.

Some CT scans used in the research came from the NSF-funded oVert project.