by Jerald Pinson • July 27, 2022
The origin of Assateague's wild horses has remained a mystery for centuries, but new genetic data supports the theory that they descended from Spanish horses marooned on the barrier island. Photo by National Park Service, CCO

An abandoned Caribbean colony unearthed centuries after it had been forgotten and a case of mistaken identity in the archaeological record have conspired to rewrite the history of a barrier island off the Virginia and Maryland coasts.

These seemingly unrelated threads were woven together when Nicolas Delsol, a postdoctoral researcher at the Florida Museum of Natural History, set out to analyze ancient DNA recovered from cow bones found in archaeological sites. Delsol wanted to understand how cattle were domesticated in the Americas, and the genetic information preserved in centuries-old teeth held the answer. But they also held a surprise.

“It was a serendipitous finding,” he said. “I was sequencing mitochondrial DNA from fossil cow teeth for my Ph.D. and realized something was very different with one of the specimens when I analyzed the sequences.”

That’s because the specimen in question, a fragment of an adult molar, wasn’t a cow tooth at all but instead once belonged to a horse. According to a study published this Wednesday in the journal PLOS ONE, the DNA obtained from the tooth is the oldest ever sequenced for a domesticated horse from the Americas. 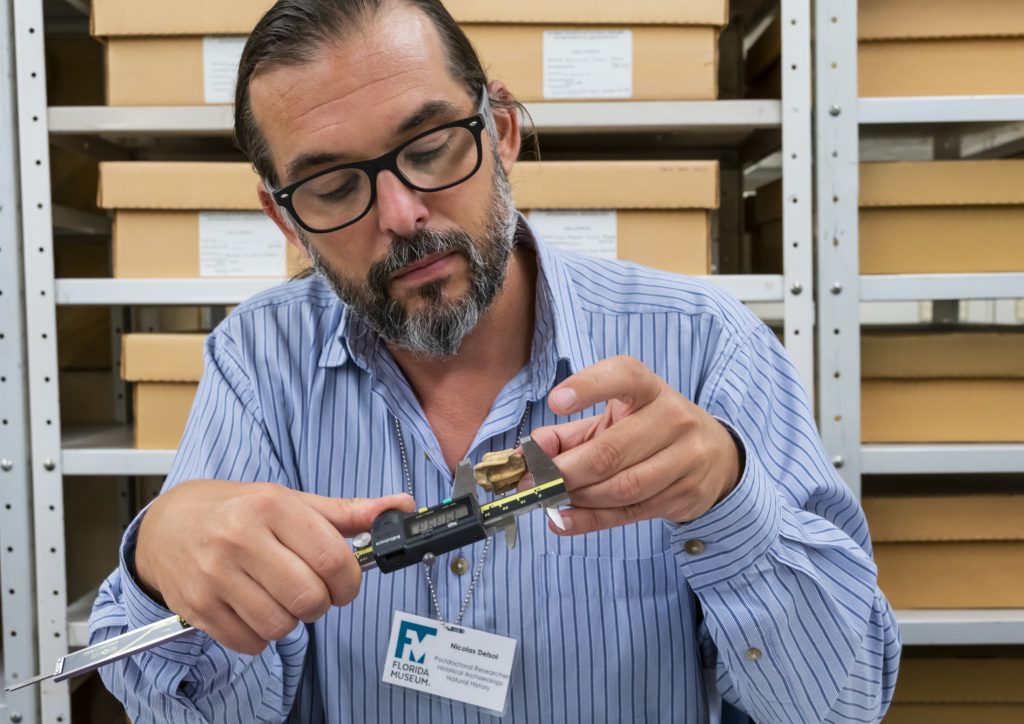 Nicolas Delsol was originally sequencing ancient DNA from cow teeth preserved in archaeological sites when he realized one of his specimens actually belonged to a horse. 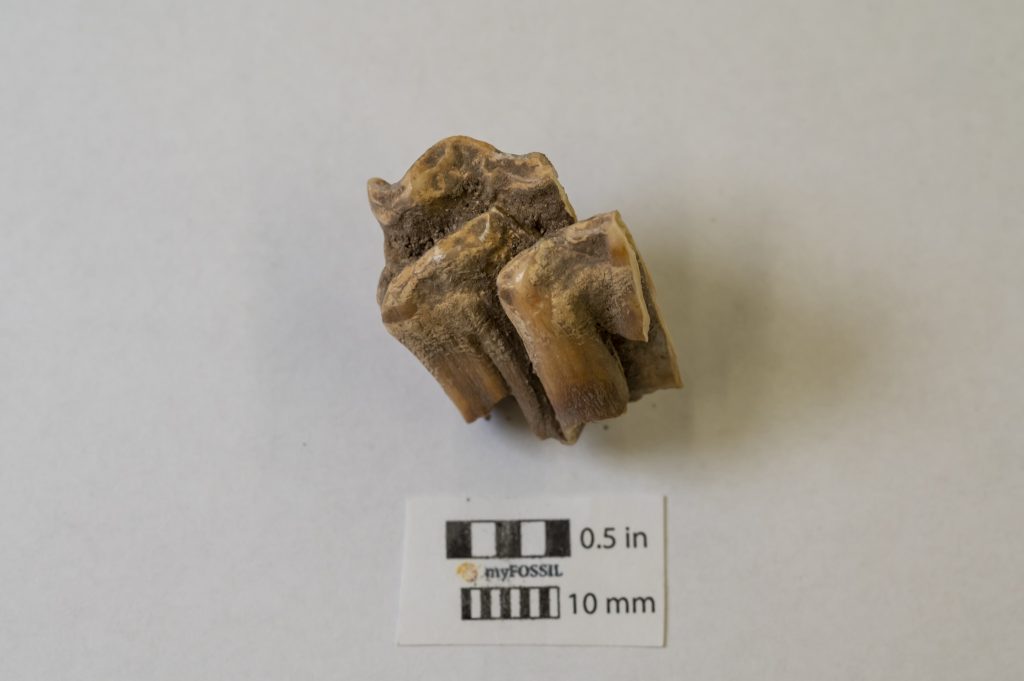 This tooth is all that remains from one of the first horses introduced to the Americas, and its DNA is helping rewrite the history for one of the best known horse breeds in the United States: The Chincoteague pony. 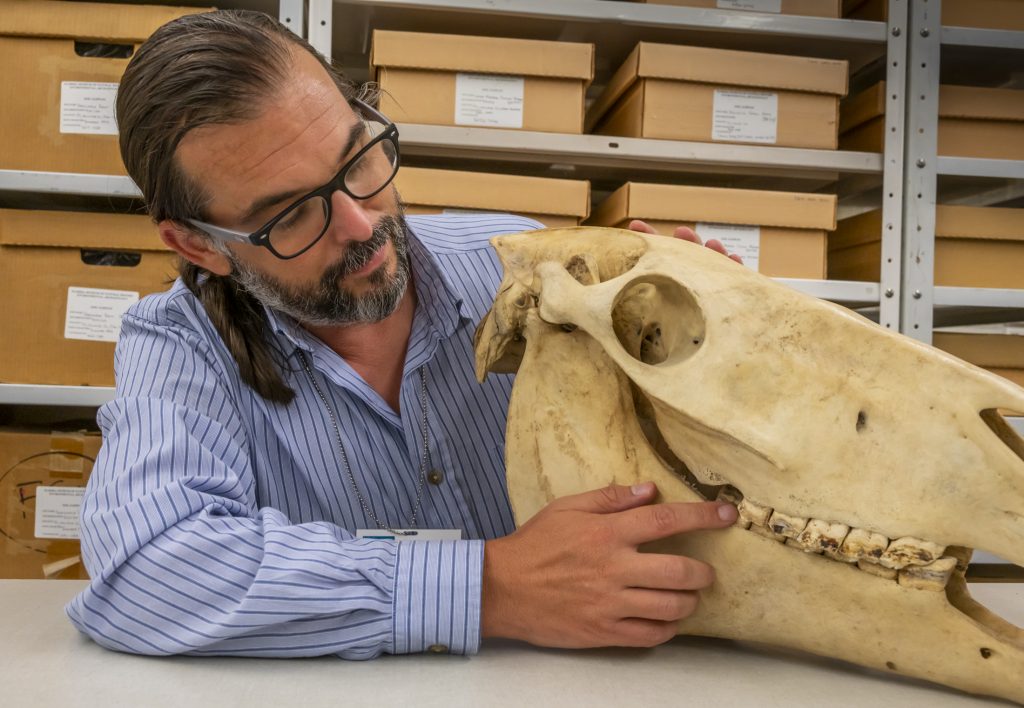 Based on the size, shape and pattern of wear, Nicolas Delsol determined the tooth is a molar that belonged to an adult horse and would have been located in the approximate position in the skull being pointed to in this photo.

The tooth was excavated from one of Spain’s first colonized settlements. Located on the island of Hispaniola, the town of Puerto Real was established in 1507 and served for decades as the last port of call for ships sailing from the Caribbean. But rampant piracy and the rise of illegal trade in the 16th century forced the Spanish to consolidate their power elsewhere on the island, and in 1578, residents were ordered to evacuate Puerto Real. The abandoned town was destroyed the following year by Spanish officials.

The remnants of the once-bustling port were inadvertently rediscovered by a medical missionary named William Hodges in 1975. Archaeological excavations of the site led by Florida Museum distinguished research curator Kathleen Deagan were carried out between 1979 and 1990.

Horse fossils and associated artifacts are incredibly rare at Puerto Real and similar sites from the time period, but cow remains are a common find. According to Delsol, this skewed ratio is primarily due to the way Spanish colonialists valued their livestock.

“Horses were reserved for individuals of high status, and owning one was a sign of prestige,” he said. “There are full-page descriptions of horses in the documents that chronicle the arrival of [Hernán] Cortés in Mexico, demonstrating how important they were to the Spanish.”

In contrast, cows were used as a source of meat and leather, and their bones were regularly discarded in communal waste piles called middens. But one community’s trash is an archaeologist’s treasure, as the refuse from middens often confers the clearest glimpse into what people ate and how they lived.

The specimen’s biggest surprise wasn’t revealed until Delsol compared its DNA with that of modern horses from around the world. Given that the Spanish brought their horses from the Iberian Peninsula in southern Europe, he expected horses still living in that region would be the closest living relatives of the 500-year-old Puerto Real specimen.

Instead, Delsol found its next of kin over 1,000 miles north of Hispaniola, on the island of Assateague off the coast of Maryland and Virginia. Feral horses have roamed freely across the long stretch of barrier island for hundreds of years, but exactly how they got there has remained a mystery.

According to the National Park Service, which manages the northern half of Assateague, the likeliest explanation is that the horses were brought over in the 1600s by English colonists from the mainland in an attempt to evade livestock taxes and fencing laws. Others believe the feral herds descended from horses that survived the shipwreck of a Spanish galleon and swam to shore, a theory popularized in the 1947 children’s novel “Misty of Chincoteague.” The book was later adapted to film, helping spread the shipwreck legend to an even wider audience.

Until now, there has been little evidence to support either theory. Proponents of the shipwreck theory claim it would be unlikely that English colonists would lose track of valuable livestock, while those in favor of an English origin of the herds point to the lack of sunken vessels nearby and the omission of feral horses in historical records of the region.

The results of the DNA analysis, however, unequivocally point to Spanish explorers as being the likeliest source of the horses on Assateague, Delsol explained.

“It’s not widely reported in the historical literature, but the Spanish were exploring this area of the mid-Atlantic pretty early on in the 16th century. The early colonial literature is often patchy and not completely thorough. Just because they don’t mention the horses doesn’t mean they weren’t there.”

The feral herds on Assateague weren’t the only horses to revert back to their wild heritage after arriving in the Americas. Colonists from all over Europe brought with them horses of various breeds and pedigrees, some of which bucked their bonds and escaped into the surrounding countryside.

Today, the U.S. Bureau of Land Management estimates there are roughly 86,000 wild horses across the country, most of which are located in western states, such as Nevada and Utah. Delsol hopes that future ancient DNA studies will help decode the complex history of equine introductions and migrations that occurred over the last several centuries and offer a clearer understanding of today’s diversity of wild and domesticated horses.

The study was published in the journal PLOS ONE.

Funding for the study was provided in part by the National Science Foundation (DDIG 1930628) and the Fulbright Program.