by Jerald Pinson • June 16, 2022
Brachycephalus frogs are so small, they appear to have lost the ability to maintain balance while jumping. Photo by Ribeiro et al. (2017) CC-BY-NC

Amphibians are exceptionally good at being small. There are salamanders the size of your thumb nail, pygmy newts that live in moss patches and feast on microscopic insects, and inch-long African frogs that spend their entire lives in and around the banks of small puddles. In fact, the title for the world’s smallest vertebrate is currently held by a species of frog that could perch comfortably on the head of a pencil eraser.

A new study published in the journal Scientific Advances shows that all this downscaling doesn’t come without serious drawbacks. In an evolutionary first, researchers have shown that a group of frogs alternately called pumpkin toadlets and flea toads have become so small they’re no longer able to maintain balance during quick maneuvers, like jumping.

The researchers studied four species in the genus Brachycephalus, showing that these miniature frogs are able to jump when gently prodded, but invariably lose control of their trajectory mid-leap, ungracefully pirouetting through the air before coming in for a crash-landing.

“They’re not great jumpers, and they’re not particularly good walkers either. They sort of stomp around in a stilted, peg-like version of walking.” said study co-author Edward Stanley, director of the Florida Museum of Natural History’s Digital Discovery and Dissemination Laboratory.

Researchers were able to pinpoint the likely cause of this impractical mode of transportation through oVert, a four-year initiative among 18 institutions to create to create 3-D models from CT scans for more than 20,000 museum specimens across the U.S.

Co-author Amber Singh stitched together hundreds of frog scans while working with the oVert project as an undergraduate student at the University of Florida. Pumpkin toadlets stand out in these scans as having the smallest vestibular system yet measured in any vertebrate organism.

The vestibular system is a fluid-filled network of spiraling chambers inside the inner ears of animals that looks a bit like a nautilus. When an animal moves its head, the liquid in these chambers moves along with it, brushing against tiny hairs that send electrical impulses to the brain that allow it to maintain balance, tell up from down and detect acceleration.

Natural selection has placed strict constraints on the vestibular system, however. Baleen whales, a group that includes the largest mammals on Earth, have chambers that are only slightly larger than those of humans. This doesn’t seem to be much of an issue for large vertebrates, but for organisms on the smaller end of the size spectrum, the vestibular system takes up proportionally more and more space inside the skull. The chambers within the skulls of pumpkin toadlets look like overinflated balloons.

“Even though the canals are as big as they can possibly be relative to their heads, they’re still not big enough for the liquid to move at a rate that would allow them to maintain balance,” Stanley said.

This isn’t the first time Brachycephalus frogs have roused the interest of scientists. Pumpkin toadlets make high-pitched mating calls that sound like chirruping crickets. However, at least two species have underdeveloped auditory systems and are completely deaf to the love songs of amorous males.

Then there’s the glowing skeletons. In 2019, scientists discovered that the same two species with males who call upon deaf ears also have fluorescent bones, which are visible beneath their thin skin when viewed with a black light.

“They’re peculiar frogs,” said co-author André Confetti, a Ph.D. candidate at the Federal University of Paraná, Brazil. “They can’t swim, they don’t have tadpoles, and they don’t seem to get around much either. We’ve monitored the acoustic behavior of these frogs and have been able to record the same individual at the same spot over the course of a year.” 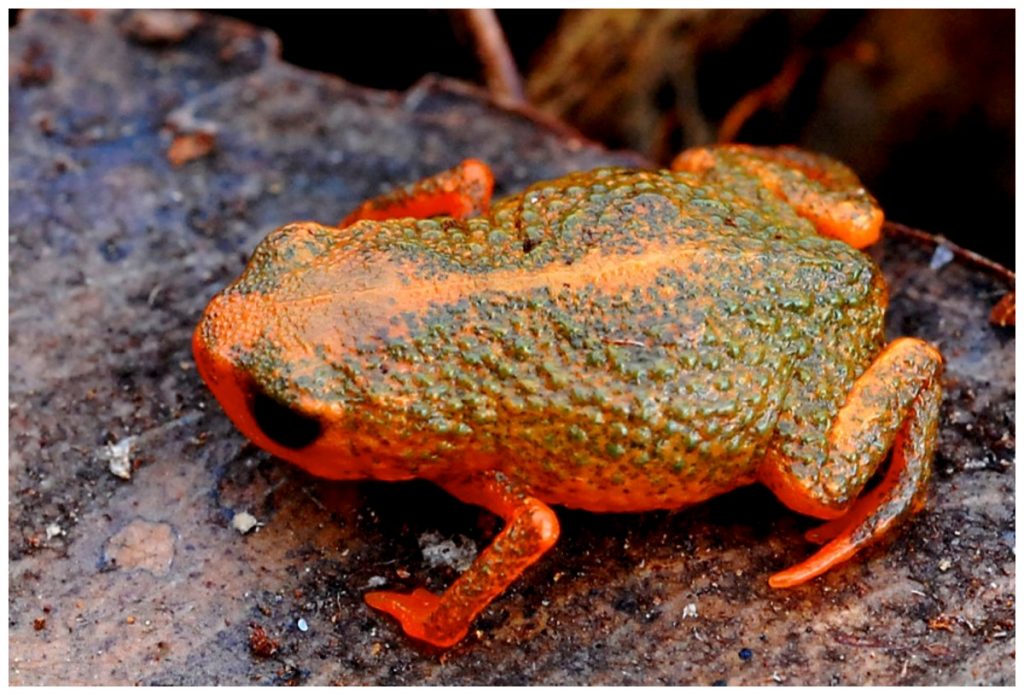 Aside from their inability to jump, their small size has also placed restrictions on the anatomy of Brachycephalus frogs, demonstrated by this B. verrucosas which has fewer toes than most other frogs. 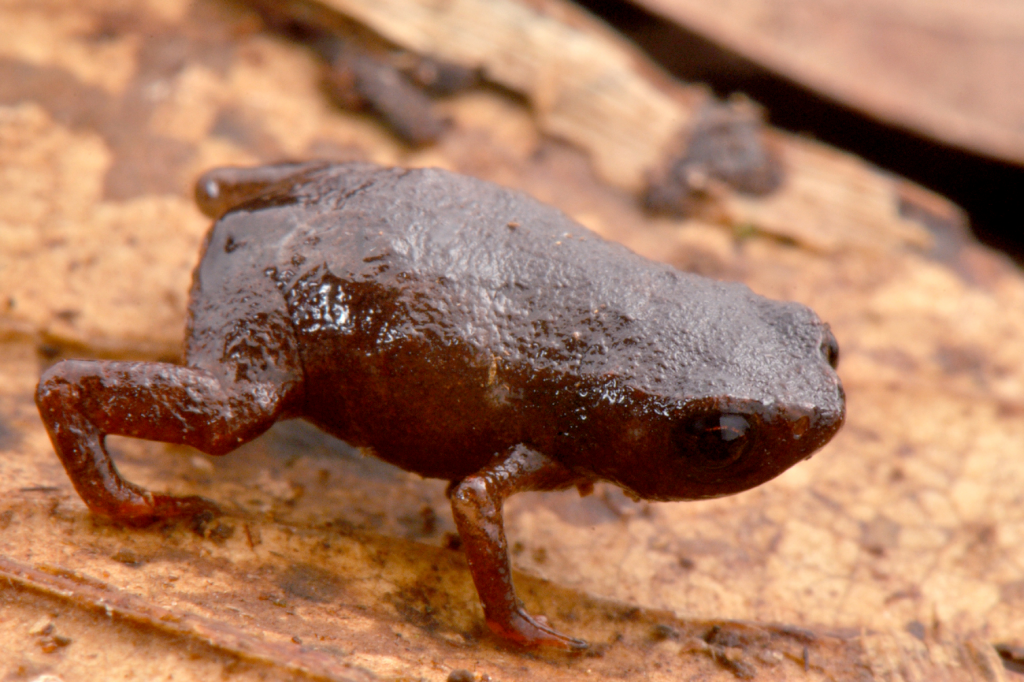 Flea toads, such as this Brachycephalus curupira are a bit drab compared to their pumpkin toadlet relatives, a condition that helps them blend in with the brown tones of forest floors. 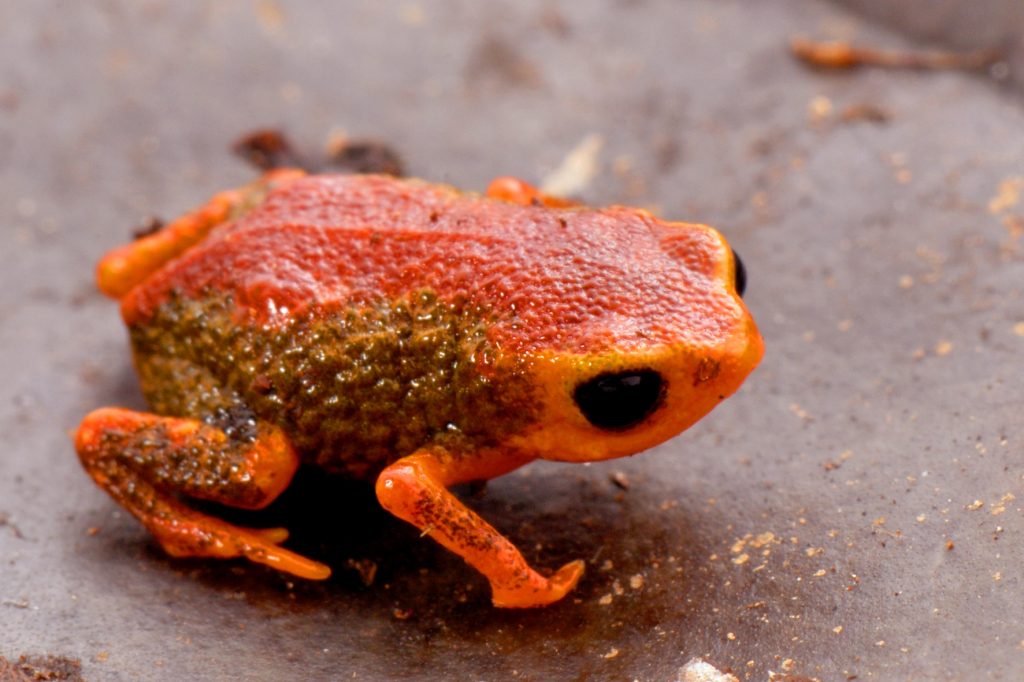 Some Brachycephalus frogs, such as this B. coloratus described in 2017, have bright coloration that warns predators of their toxicity. 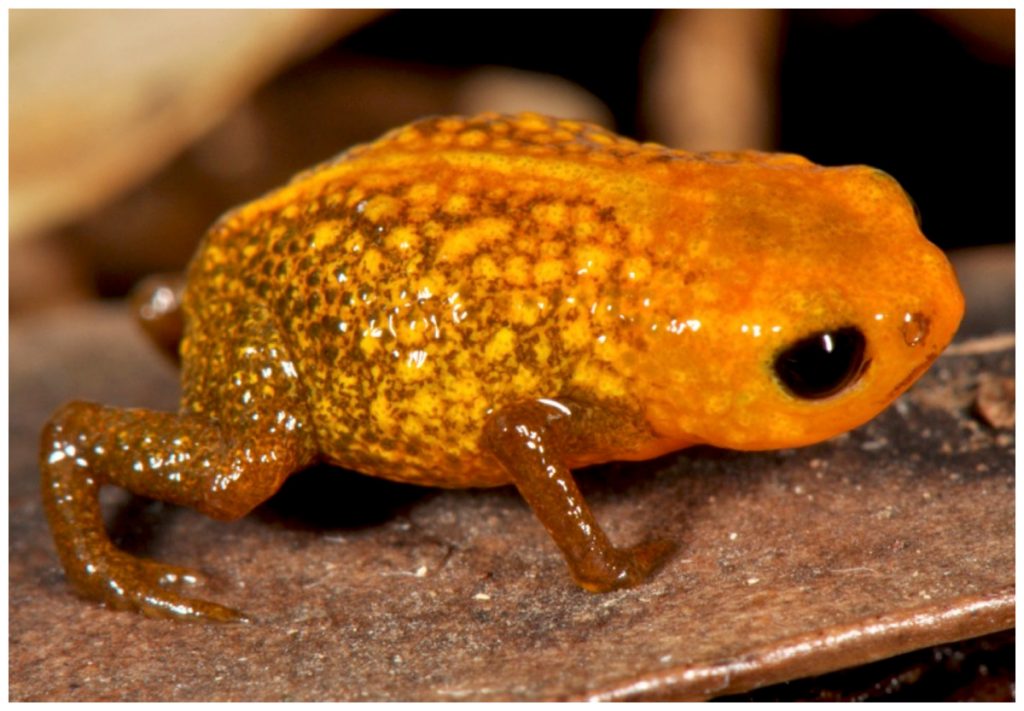 Scientists are discovering new species of Brachycephalus on a regular basis, such as this B. auroguttatus described in 2015. 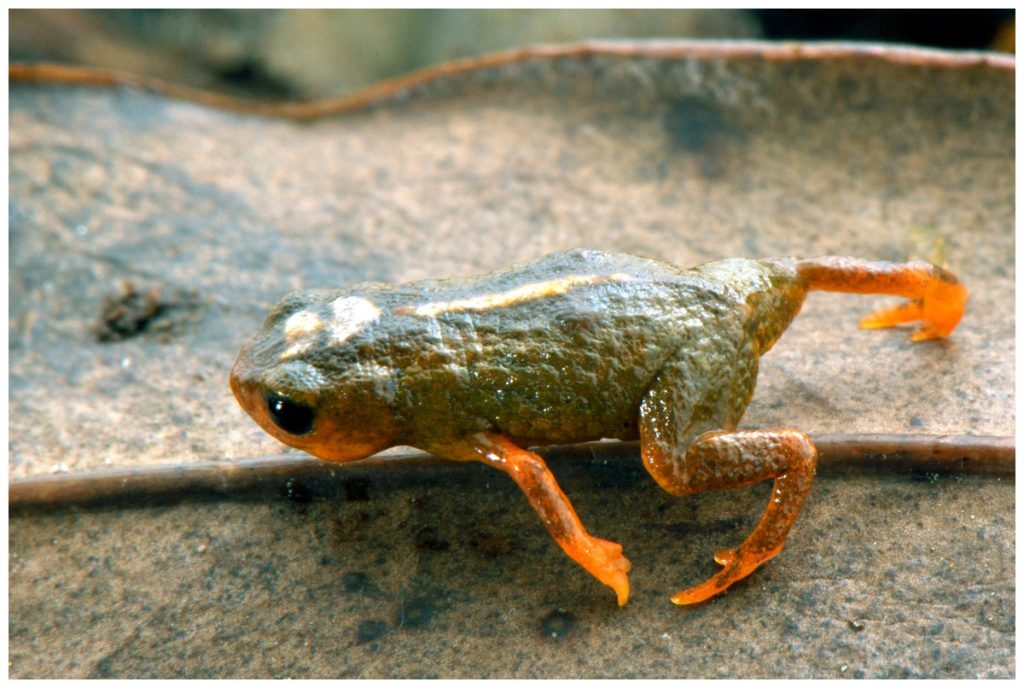 This species of pumpkin toadlet, Brachycephalus albolineatus was described by scientists in 2016.

This tendency to stick around is likely one of their biggest strengths. Brachycephalus frogs live beneath the leaf litter of Brazil’s tropical Atlantic Forest. Some are brightly colored — a warning to would-be predators of their toxicity — while others are cloaked in drab colors that aid in camouflage.

In each case, their main tactic to avoid being eaten doesn’t involve high-speed getaways, but rather staying in one place and being as unappetizing or as inconspicuous as possible.

Stanley suspects these visual cues, or lack thereof, may have created a tenuous balancing act for Brachycephalus.

“They’re not jumping around a lot, and when they do, they’re probably not that worried about landing, because they’re doing it out of desperation,” he said. “They get more benefits from being small than they lose from their inability to stick a landing.”

The researchers published their study in Science Advances.

Funding for the study was provided by the National Science Foundation (grant DBI-1701714) and Southern Illinois University Edwardsville graduate school.