Megalodon, the largest shark that ever lived, is known only from its gigantic bladelike teeth, which can be more than 7 inches long. But these teeth, described by some scientists as the “ultimate cutting tools,” took millions of years to evolve into their final, iconic form.

Megalodon’s earliest ancestor, Otodus obliquus, sported three-pronged teeth that could have acted like a fork for grasping and tearing fast-moving fishes. In later megatooth shark species, teeth flattened and developed serrated edges, transitioning to a knifelike shape for killing and eating fleshy animals like whales and dolphins.

But the final tooth evolution in this lineage of powerful predators still took 12 million years, a new study shows. An analysis of teeth from megalodon and its immediate ancestor, Carcharocles chubutensis, traced the unusually slow, gradual shift from a large tooth flanked by mini-teeth – known as lateral cusplets – to teeth without these structures.

“This transition was a very long, drawn-out process, eventually resulting in the perfect cutting tool – a broad, flat tooth with uniform serrations,” said study lead author Victor Perez, a doctoral student in geology at the Florida Museum of Natural History. “It’s not yet clear why this process took millions of years and why this feature was lost.” 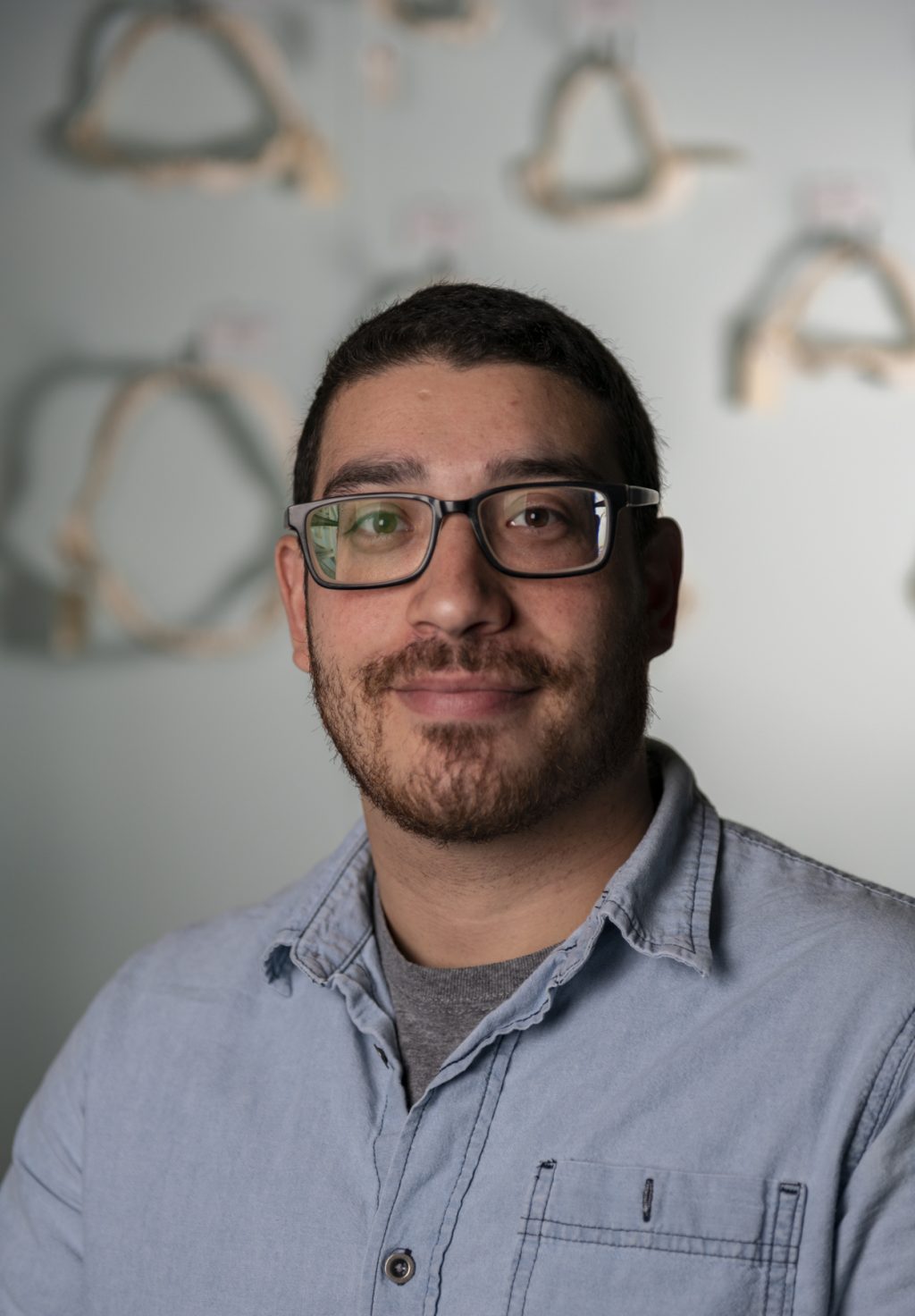 Fascinated by fossil sharks since childhood, Victor Perez is a doctoral student in geology at the University of Florida and the Florida Museum of Natural History. 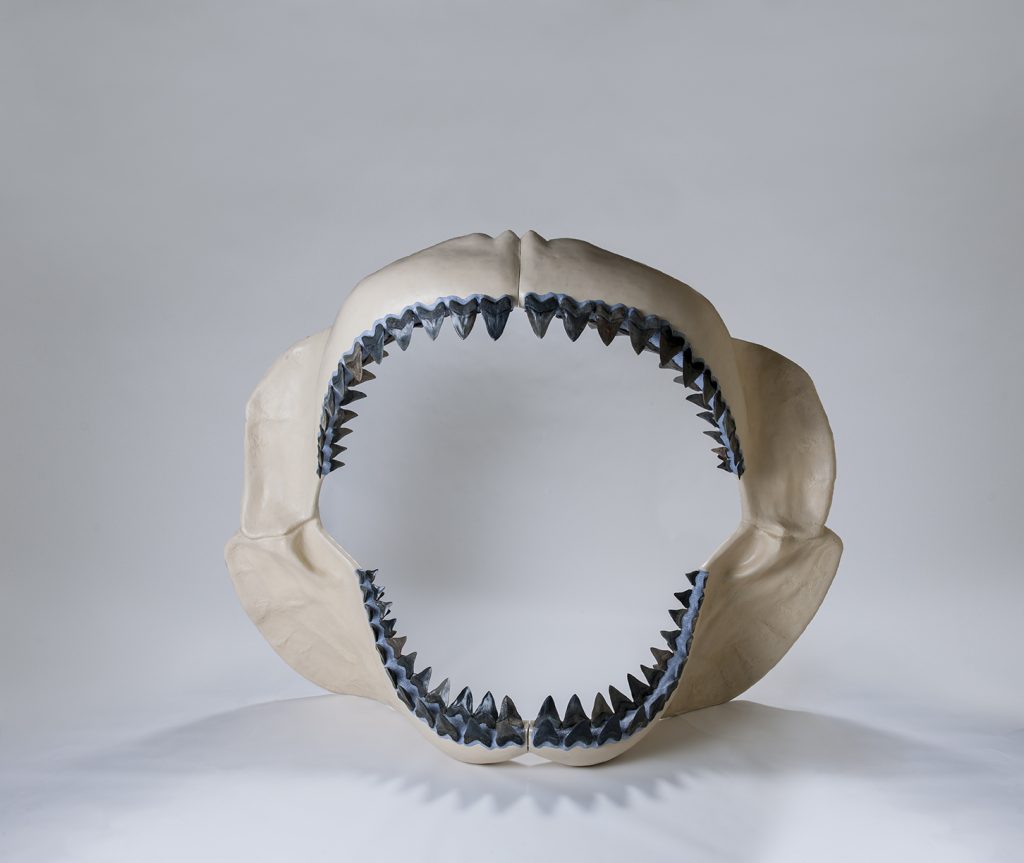 This is a reconstructed jaw of Carcharocles megalodon, an extinct species of shark that lived about 23 to 3.6 million years ago. 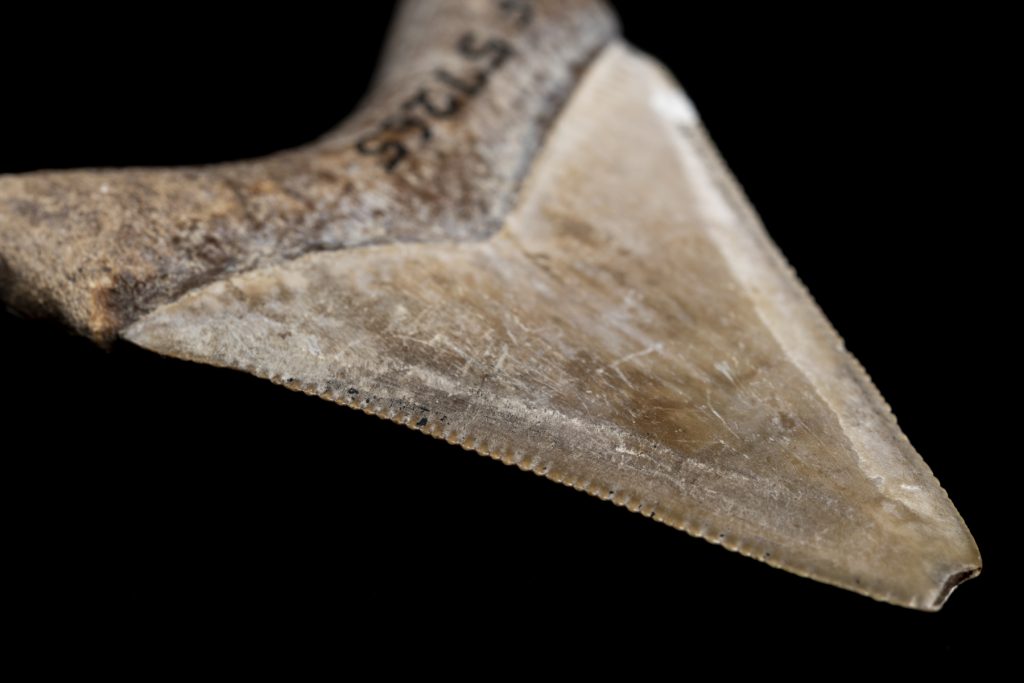 Megalodon’s bladelike teeth were ideal for preying on fleshy marine mammals, such as whales and dolphins.

Teeth can offer a wealth of information about an animal, including clues about its age, when it lived, its diet and whether it had certain diseases. Megalodon’s teeth suggest its hunting style was likely a single-strike tactic, designed to immobilize its prey and allow it to bleed out, Perez said.

“It would just become scavenging after that,” he said. “A shark wouldn’t want to grab and hold onto a whale because it’s going to thrash about and possibly injure the shark in the process.”

Perez and his collaborators carried out a “census of teeth,” analyzing 359 fossils with precise location information from the Calvert Cliffs on the western shore of Maryland’s Chesapeake Bay – an ocean in C. chubutensis and megalodon’s day. The cliffs provide an uninterrupted rock record from about 20 to 7.6 million years ago, a period that overlaps with these megatooth sharks.

Adult C. chubutensis had cusplets while adult megalodon did not, but this feature is not a reliable identifier of which species a tooth belonged to, Perez said. Juvenile megalodon could have cusplets, making it impossible to discern whether a tooth with cusplets came from C. chubutensis or a young megalodon.

Some teeth analyzed for the study had tiny bumps or pronounced serrations where cusplets would be. A set of teeth from a single shark had cusplets on some, no cusplets on others and replacement teeth with reduced cusplets. 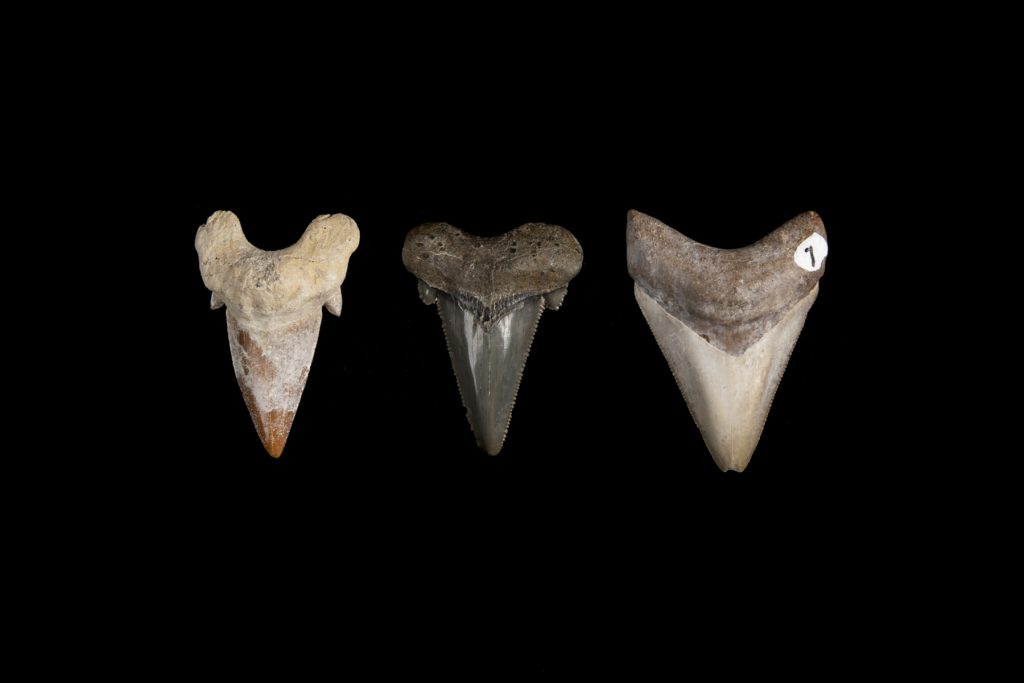 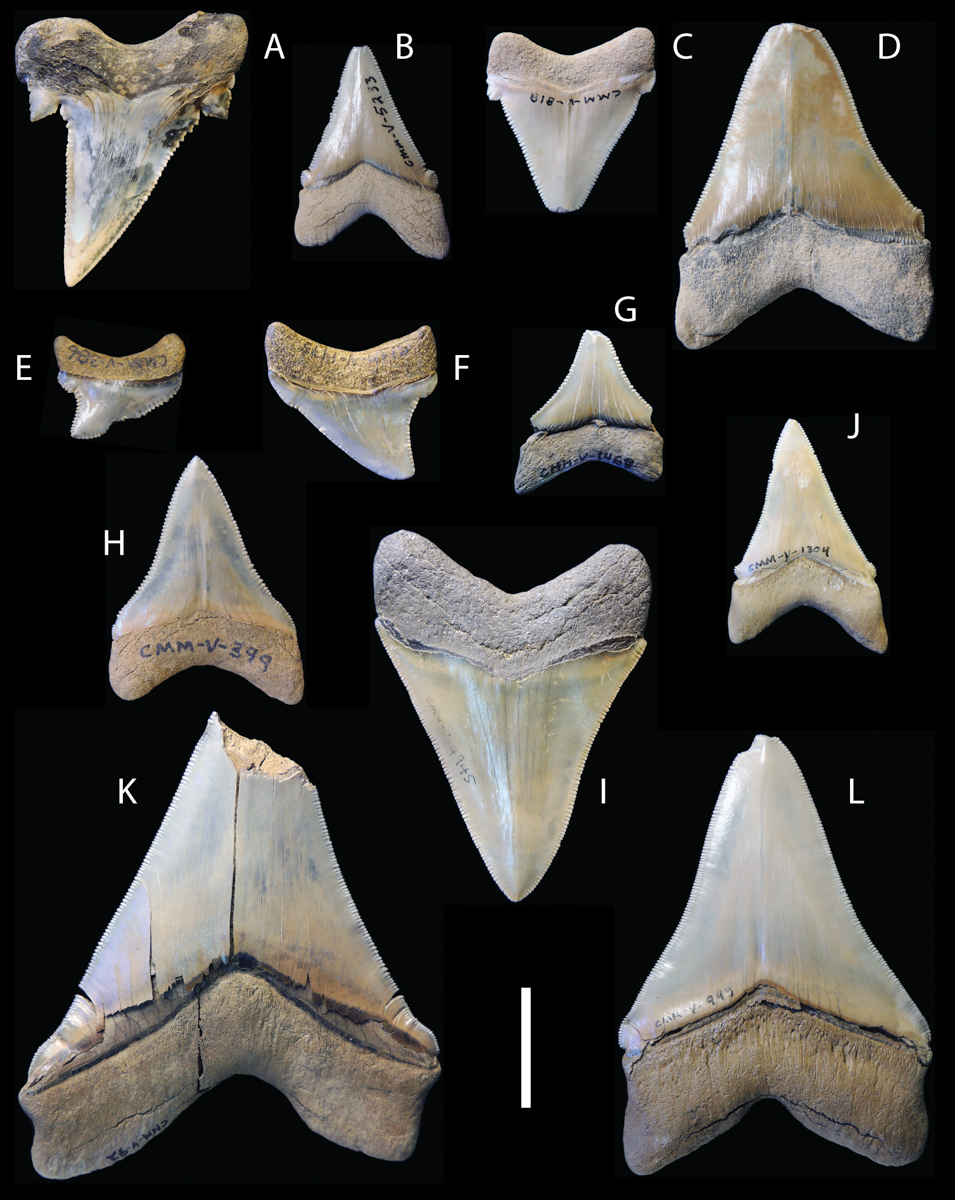 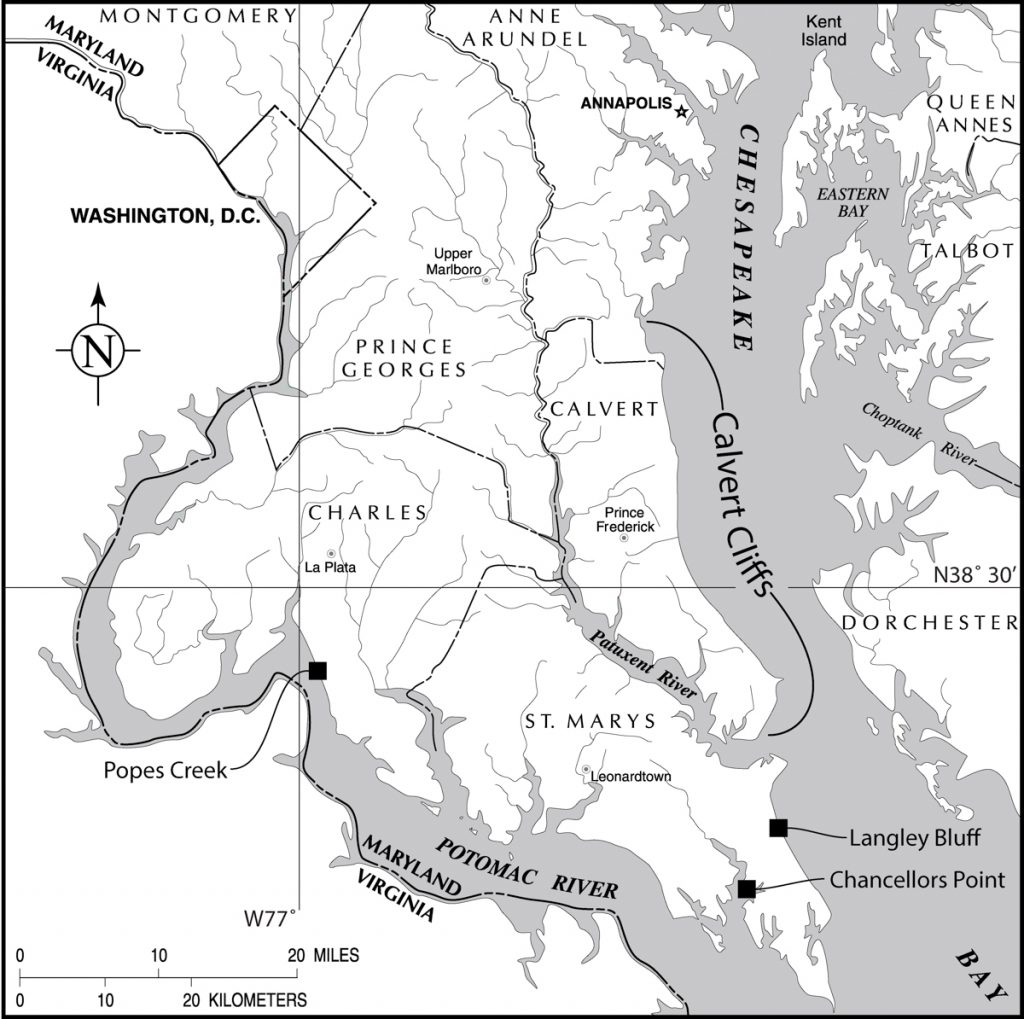 This is why paleontologists cannot pinpoint exactly when megalodon originated or when C. chubutensis went extinct, said Perez, who began the project as an intern at the Calvert Marine Museum.

“As paleontologists, we can’t look at DNA to tell us what is a distinct species. We have to make distinctions based off of physical characteristics,” he said. “We feel it’s impossible to make a clean distinction between these two species of sharks. In this study, we just focused on the evolution of this single trait over time.”

Lateral cusplets may have been used to grasp prey, Perez said, which could explain why they disappeared as these sharks shifted to a cutting style of feeding. Another possible function was preventing food from getting stuck between the sharks’ teeth, which could lead to gum disease. But if the cusplets served a purpose, why lose them?

“It’s still a mystery,” he said. “We’re wondering if something was tweaked in the genetic pathway of tooth development.”

Perez’s fascination with fossil sharks started at age 6 when he visited the Calvert Marine Museum.

“I got to take a shark tooth home from a discovery box. That set me off on the whole career path of studying fossils,” he said.

That first tooth spawned an obsession in Perez, who lived about an hour from the Calvert Cliffs. On family trips to the beaches on the north end of the cliffs, he spent his time combing the area for shark teeth.

“That was the only thing I wanted to do,” he said. “On a typical trip, I would leave with an average of 300 teeth.” 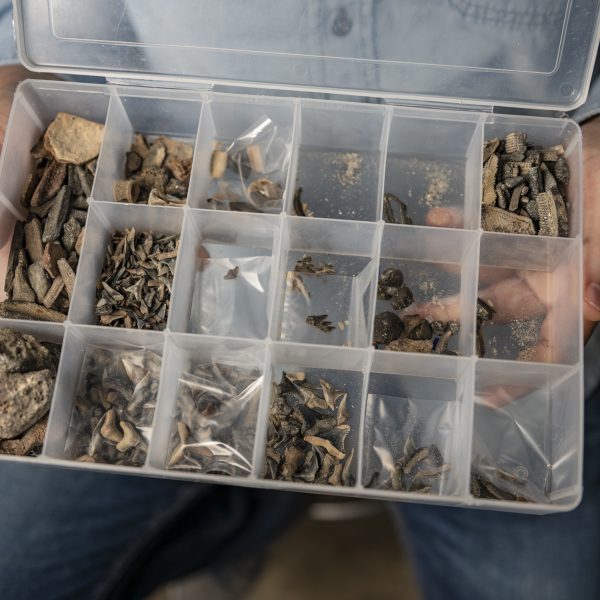 Perez displays some of the shark teeth he collected as a child at Calvert Cliffs. His hobby grew into a career studying fossil sharks. 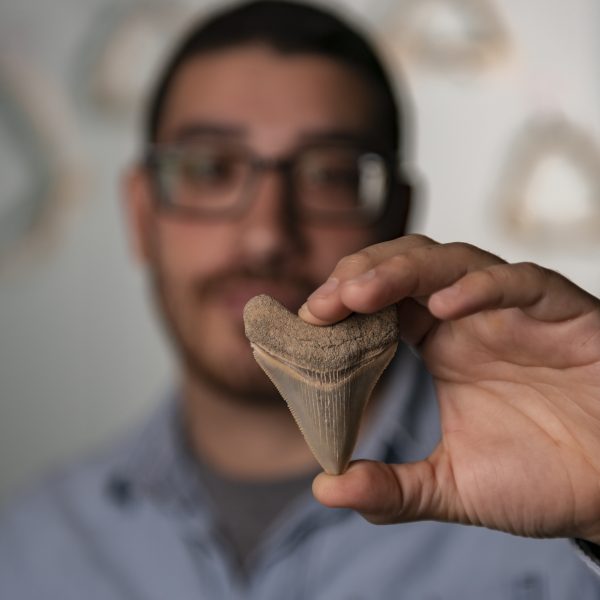 Perez displays a megalodon tooth he found on the Calvert Cliffs one afternoon as he headed home from working at the Calvert Marine Museum.

For this study, he relied on the efforts of fellow beachcombers: The vast majority of teeth analyzed in the study were discovered by amateur fossil collectors and donated to museum collections.

“This study is almost entirely built on the contributions of amateur, avocational paleontologists,” he said. “They are a valuable part of research.”

The researchers published their findings in the Journal of Vertebrate Paleontology.

Funding for the research was provided by the Clarissa and Lincoln Dryden Endowment for Paleontology at the Calvert Marine Museum, the Board of County Commissioners and citizens of Calvert County and a National Science Foundation Graduate Research Fellowship.