by Jerald Pinson • June 22, 2022
Ancient pottery holds clues to the past lives, traditions, and movements of Indigenous people from the Caribbean Islands. Florida Museum photo by Kristen Grace

With some 7,000 islands and cays and a 7,000-year history of human habitation, the Caribbean Sea is practically synonymous with maritime travel. The very word “canoe” is derived from the term “kana:wa,” used by the Indigenous Arawakans of the Caribbean to describe their dugout vessels.

Without clear road signs to indicate where native islanders were traveling, however, the task of reconstructing ancient trade routes relies on subtle clues locked away in the archaeological record. Researchers at the Florida Museum of Natural History recently turned to pottery to tease apart the navigational history of the Caribbean, analyzing the composition of 96 fired clay fragments across 11 islands.

The study, published in the Journal of Archaeological Science: Reports, is the broadest of its kind yet conducted in the Greater Antilles and marks the first time that pottery artifacts from the Lucayan Islands — The Bahamas plus the Turks and Caicos Islands — have been analyzed to determine their elemental composition and origin.

“Our methods mark a big improvement over other studies that mostly look at a single site or single island, where you might see differences but not know what it means because you’re looking at the results in isolation,” said co-author Lindsay Bloch, a courtesy faculty member with the Florida Museum’s Ceramic Technology Lab.

People have lived on the Caribbean islands on and off for more than 7,000 years, migrating in waves from Central and South America. As early as 800 B.C., new groups arrived from Venezuela and established a trading network among islands, which they used to exchange food, tools and jewelry. But the most common artifacts that survived to the present are the pottery vessels these objects were carried in.

“Most materials don’t preserve well in the Caribbean because of the warm, humid environment, but pottery is durable, so it ends up being one of the most common things we find,” said lead author Emily Kracht, a collections assistant in the Ceramic Technology Lab.

Over the ensuing millennia, different Caribbean cultures developed unique styles and techniques for constructing their pottery. Some artifacts are simple and unadorned, while others are highly decorated, with a lattice of incised lines, punctations, raised ridges and flared rims.

Many studies have relied almost entirely on similarities in style to distinguish between different cultures and infer their movements. But, as Bloch explains, this method has often left more questions than answers and excludes material with potentially valuable information.

“The vast majority of pottery that we find anywhere in the world is going to be undecorated. It’s going to be things used for cooking or storage, which are typically plain and often get ignored because they’re seen as generic,” she said.

Rather than studying the minutiae of varying styles, the researchers focused instead on what the pottery was made of. Using a laser to etch microscopic lines into their samples, the researchers determined the exact amounts and identities of each element in the clay used to make the pottery. Their final analysis included more than seven decades’ worth of archaeological collections that span over 1,000 years of Indigenous Caribbean history.

“One of the advantages of elemental analysis is that we’re explicitly looking for differences, which allows us to see where a pot was made and compare that to where it ended up,” Bloch said. 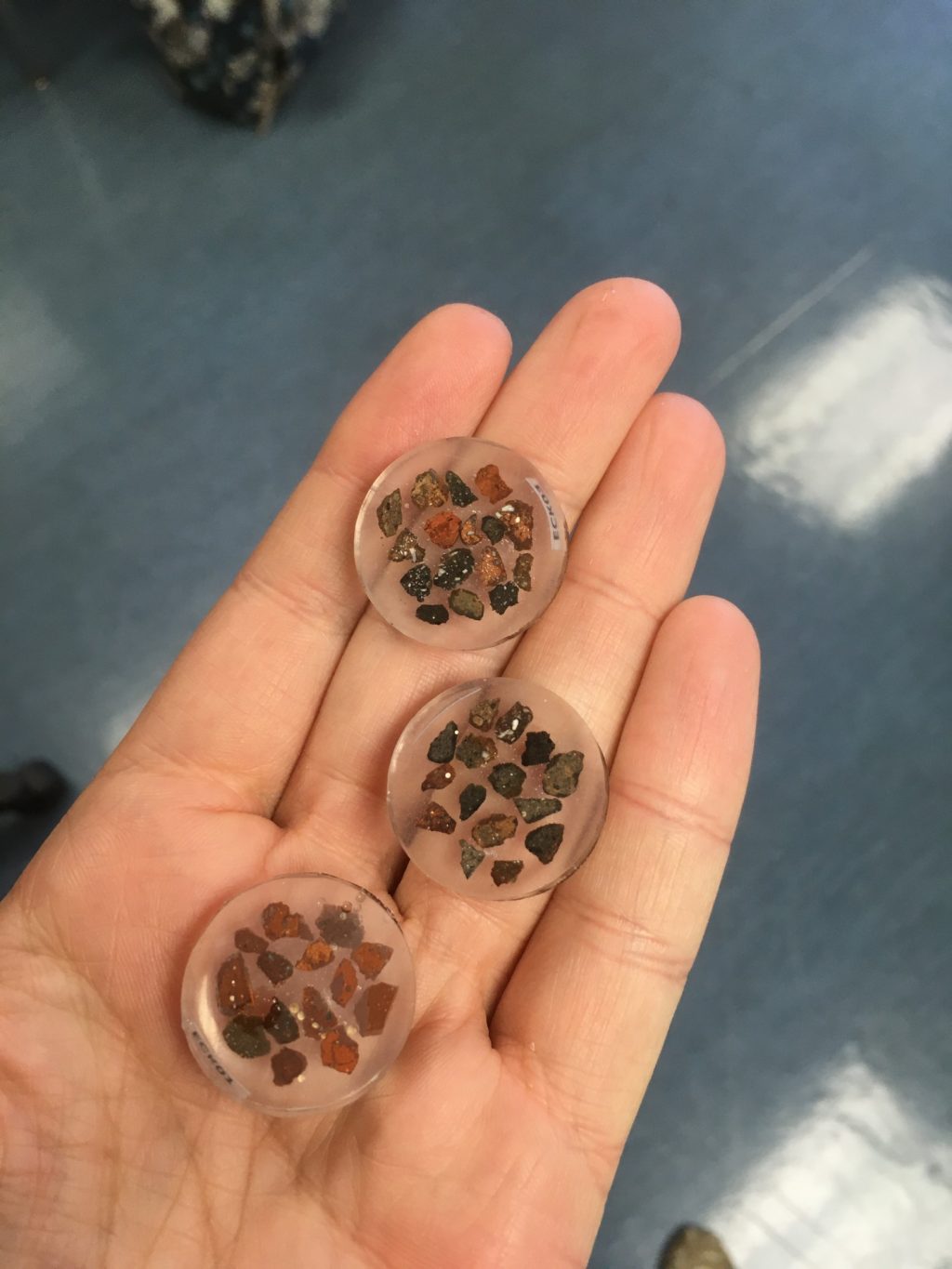 The researchers removed small fragments from pottery vessels and embedded them in resin before analyzing their elemental composition. 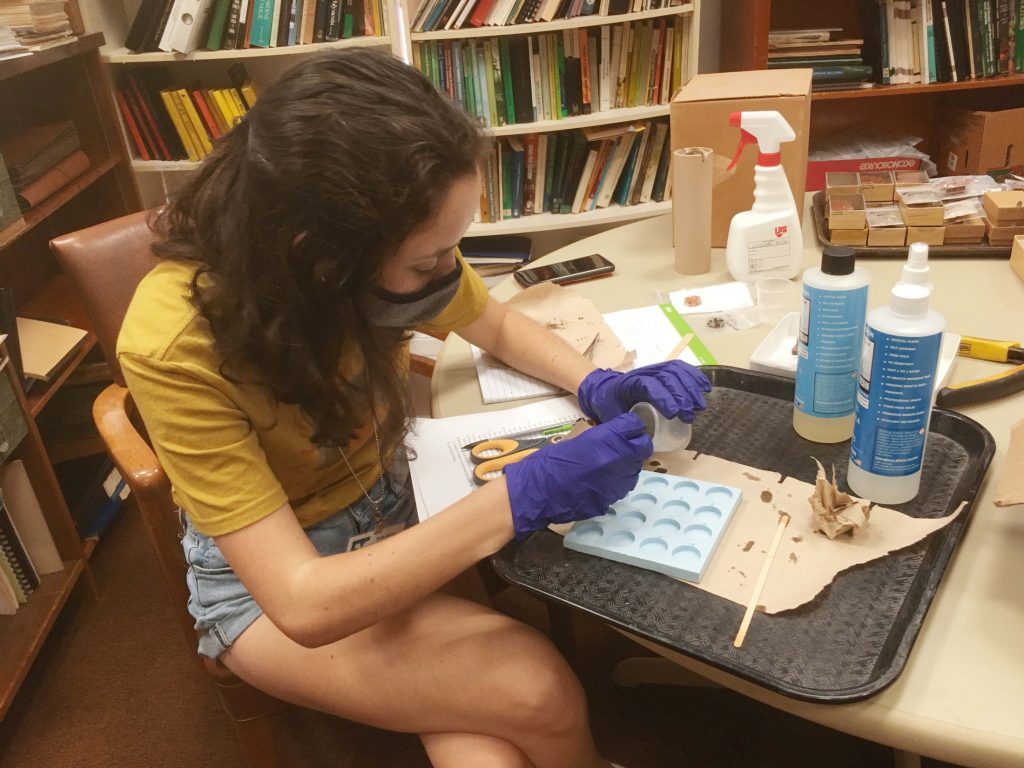 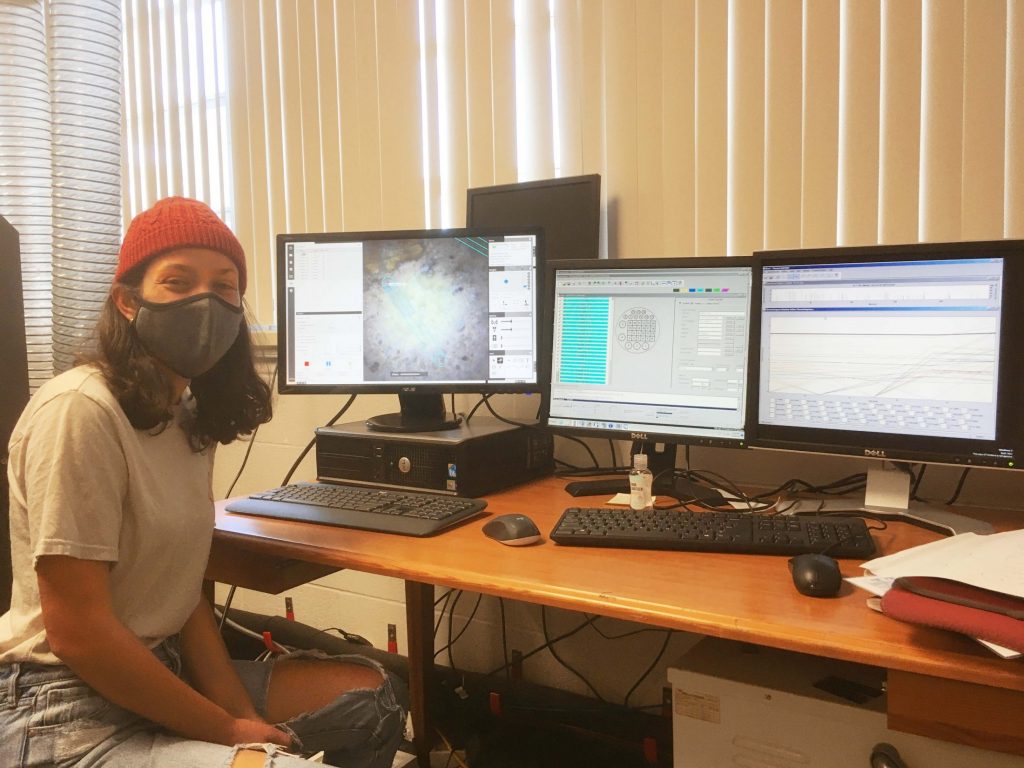 Kracht etched the pottery fragments with a laser, kicking up a microscopic plume of dust she later analyzed to determine which elements it contained and which island it likely came from.

Such detailed comparisons are possible due to the complexity of the Caribbean’s underlying geology. The largest islands in the archipelago likely got their start as an ancient underwater plateau in the Pacific Ocean. After the breakup of the supercontinent Pangaea, the Caribbean plate drifted east in a flurry of volcanic eruptions that elevated the plateau above sea level before ultimately reaching its current position in the Atlantic.

Millions of years of weathering reduced these volcanic outcrops into fine-grained clays with differing concentrations of elements like copper, nickel, chromium and antimony. These differences mean that even the smallest Caribbean pottery sherd bears the elemental signature of the region it was made in.

The results of researchers’ comparative analysis aren’t what might be expected by simply looking at a map. The Lucayan Islands were initially used only temporarily for harvesting resources, and the people who traveled to them would have set sail from the larger islands to the south that supported permanent population centers.

Cuba might initially seem like it’s the perfect staging ground for these operations, being by far the largest Caribbean island and the closest to The Bahamas. While people did make the trek across open water from Cuba, the results of the study indicate the Caribbean’s cultural hub was instead centered on the northwest coast of Hispaniola, from which people imported and exported goods for hundreds of years.

“At least some of the pottery would have been used to ferry goods out to these islands, and people would potentially carry back a variety of marine resources,” Bloch said.

People eventually struck up permanent settlements in The Bahamas and Turks and Caicos, becoming collectively known as the Lucayans, or the People of the Islands. They began making their own pottery from claylike soils deposited by African dust plumes blown in from the Saharan Desert, but the results didn’t quite hold up to the pottery from Hispaniola — literally. Lucayan pottery, called Palmetto Ware, is most often thick and soft and crumbles over time due to the poor quality of the grainy Saharan soil.

Thus, up until the arrival of the Spanish, Hispaniola remained the main trading partner and exporter of pottery to the Lucayan Islands.

“We knew that the Lucayans were related to people in Hispaniola, and this study shows their enduring relationship over hundreds of years through pottery,” Kracht said.

William Keegan of the Florida Museum of Natural History is also a co-author on the study.

Funding for the study was provided by the National Geographic Society (Grant number: NGS-55292R-19) and the Florida Museum’s Island Archaeology Endowment.