by Halle Marchese • August 31, 2020
Florida Museum herpetologist Rachel Keeffe studies frog diversity and evolution. Her illustrations show what you might be up against if you want the ripped upper body of a burrowing frog. Illustration courtesy of Rachel Keeffe

You might think the buffest frogs would be high jumpers, but if you want shredded pecs, you should train like a burrowing frog. Though famously round, these diggers are the unsung bodybuilders of the frog world. We bring you tips from frog expert Rachel Keeffe, a doctoral student at the University of Florida, and physical therapist Penny Goldberg to help you get the burrowing body of your dreams.

But first, a caveat: According to Keeffe, no workout regimen can help you train your way into a highly specialized frog physique honed by 200 million years of evolution. To better understand burrowing frog anatomy, Keeffe and her adviser David Blackburn, Florida Museum of Natural History curator of herpetology, analyzed CT scans from all 54 frog families to show these frogs boast a robust and quirky skeleton that is more variable than previously thought. 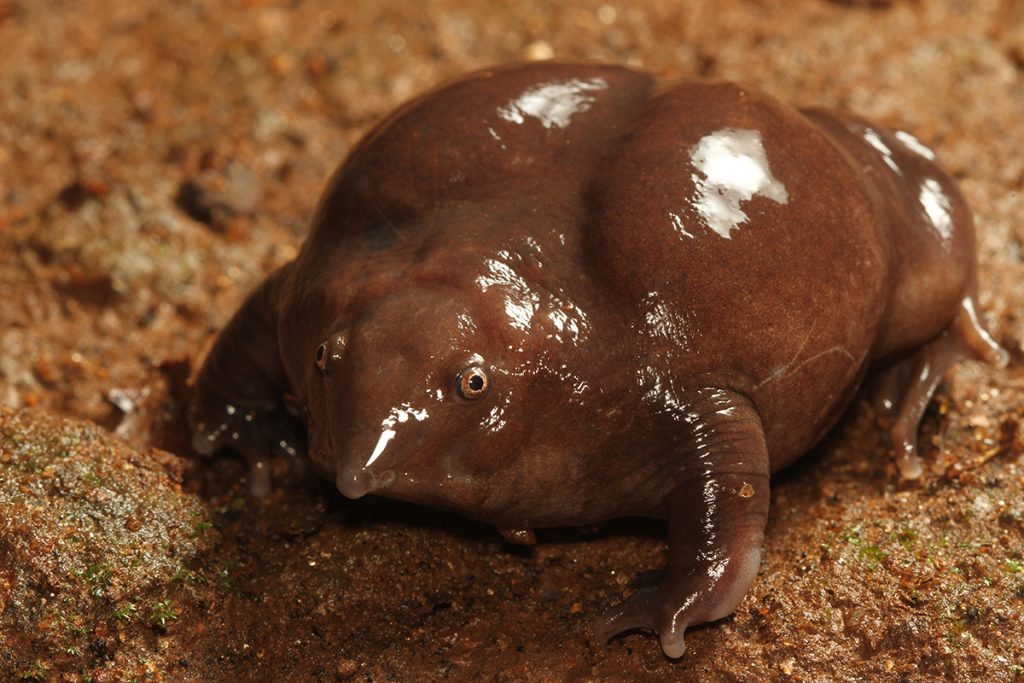 The purple frog, Nasikabatrachus sahyadrensis, is a known forward burrower with tiny eyes and a distinct mouth. 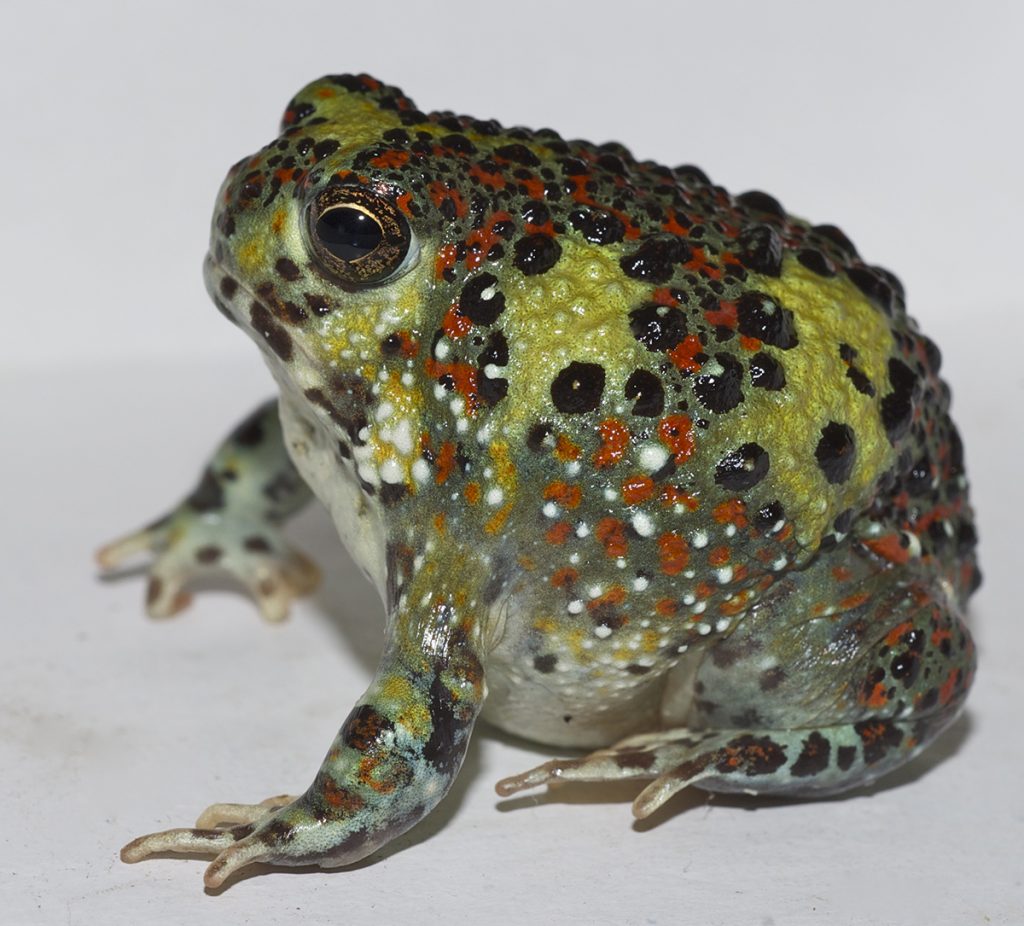 The crucifix toad, Notaden bennettii, is an Australian native that can burrow backward as deep as 3 feet. 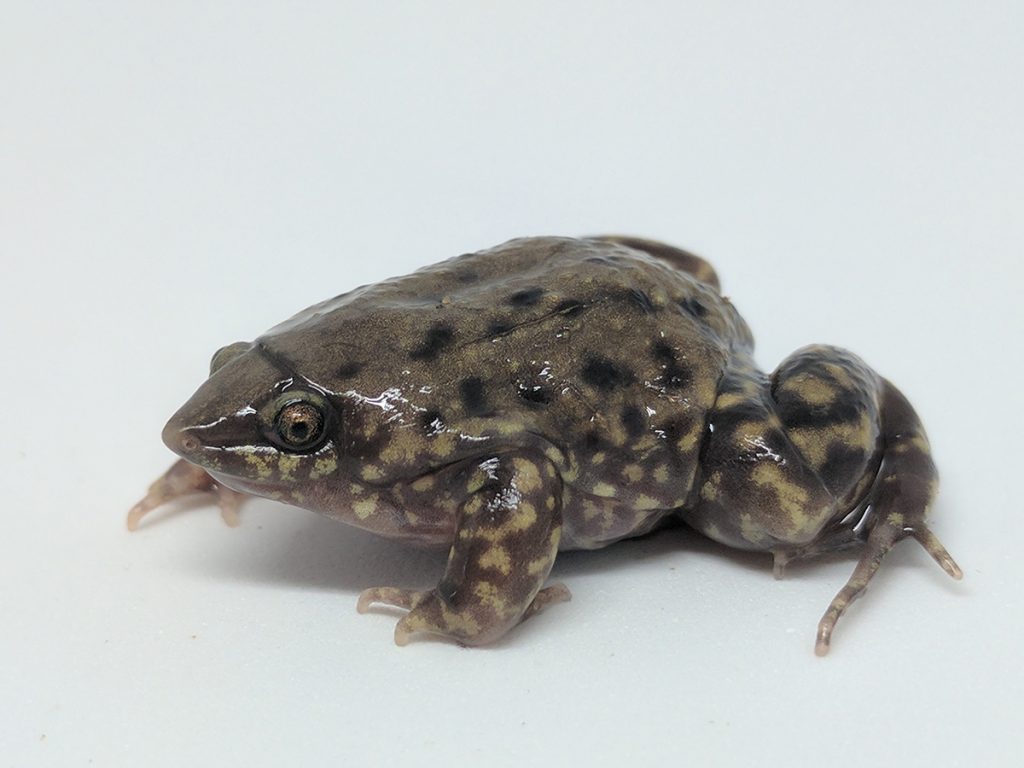 The unconventional features found in forward burrowers can include small eyes and pointy noses, as seen in this Hemisus peretti, and skin hues can range from bright orange to caper-colored.

“People think about frogs as being clean and smooth and slimy, or the classic ‘green frog on a lily pad,’ but a lot of them are dirty – they like to scoot around and be in the dirt,” Keeffe said. “Burrowing frogs are really diverse and can do a lot of cool things. And when you look at the skeletons of known burrowers, they’re very different from what you would call a ‘normal frog.’”

Burrowing frogs are found all over the world from deserts to swamps, but their underground lifestyle makes them difficult to study, Keeffe said. Most tunnel hind end-first with their back legs. But a few species are forward burrowers, using pointed snouts and powerful forelimbs bolstered by strong pectoral muscles to scrabble into the earth.

Keeffe’s sample of 89 frog species revealed radical differences in burrowing bone structure, from clavicles the size of eyelashes to other bones that are unusually thick.

“They’re so diverse that it’s challenging to think about even comparing them. It’s almost a black hole of work that we can do with forward burrowers because we tend to focus on the legs,” she said.

Some burrow to seek refuge, whether from arid temperatures or predators, and underground habitats can be hunting grounds or secluded hiding places. Other burrowing frogs can spend months at a time as deep as 3 feet belowground, surviving on a high-protein diet of termites and ants. The takeaway: If you want to compete for resources with the pros, don’t be afraid to put in the work.

Get the burly burrowing body

To train like a burrowing frog, Goldberg, assistant director of ReQuest Physical Therapy in Gainesville, recommended dedicating time to strengthening your upper back.

“In humans, the most important muscle group to focus on if you were to train like one of these frogs would be the scapular stabilizers,” she said. “These include 17 muscles, such as the lats and rotator cuff, with attachments all the way down to the pelvis that allow the upper back to generate power. To burrow like a forward burrower, you need to strengthen this entire region.”

One strengthening move Goldberg recommended is the “Prone W.” Lie facedown with elbows bent and palms on the floor. Squeeze your shoulder blades down and toward your spine as you lift your arms to the ceiling for a couple seconds at a time.

“Personally, if I were a sphere, I think it would be hard for me to dig, but it doesn’t seem to affect these frogs at all,” Keeffe said. “However, frogs with stumpy legs are definitely worse at jumping, and they tend to stagger when they walk.”

For these frogs, time away from the tunnels might be spent swimming instead, Keeffe said. To compete here, Goldberg recommends the breaststroke, adding that her top training tips for getting the upper back and pecs of a forward burrower would include pullups and pushups to develop the shoulder blade area.

“In my world, we would use resistance bands and pushing or pulling motions to train this area,” Goldberg said. “Anything focusing predominantly on building strength in the upper back region.”

If resistance bands are part of your workout routine, try grasping one with both hands and extending your arms while keeping your elbows straight. For best results, Goldberg recommended starting with three sets of 10.

Burrowing frogs might also hold key answers to gaps in scientists’ understanding of amphibian evolution at large. Keeffe’s analysis also found that forward-burrowing behavior evolved independently at least eight times in about one-fifth of frog families, and the trait’s persistence in the frog family tree suggests it’s a beneficial adaptation. Keeffe also found that forward burrowers tended to have a highly contoured humerus, the bone that connects the shoulder to the elbow in humans.

Understanding how bone shape relates to musculature can help scientists identify which frogs, both modern and extinct, are forward burrowers, a helpful tool given their covert behavior.

“Even though it can be frustrating, I like them because they’re secretive,” Keeffe said. “But the whole thing underlying this study is that frogs can do a lot of cool things – they don’t just jump and they’re not just green.”

Keeffe and Blackburn published their findings in Biological Journal of the Linnean Society.

A National Science Foundation Graduate Research Fellowship funded the research. CT scans were generated from the NSF-funded oVert project.