Unlike social insects such as bees and ants, moths are generally loners. So, when Florida Museum of Natural History lepidopterist Andrei Sourakov spotted a dozen glossy black Idia moths inside a hollow tree, he made a mental note.

After he stumbled across 100 of the same species in another hollow tree, he knew he had picked up on an unusual pattern. When their numbers jumped to more than 400, he was astounded.

“That’s incredible,” he whispered, filming the phenomenon inside a giant southern red oak in San Felasco Hammock Preserve State Park. “So many moths!”

In each of Sourakov’s observations, the moths oriented themselves toward the top of the tree and away from the light. They roosted silently, each slightly apart from the others. Sourakov saw both male and female moths, but none were mating, and no larvae were feeding nearby or inside the tree, although the immature stages of this moth eat bark and other organic material.

The moths seemed to be resting en masse, waiting for night to arrive.

“This is completely new,” said Sourakov, collections coordinator at the museum’s McGuire Center for Lepidoptera and Biodiversity. “Nobody has recorded daily communal roosting behavior in moths. This appears to be a unique behavior in this species and an important part of its biology.”

His observations were published in Tropical Lepidoptera Research.

Only a few species of butterflies and moths are known to gather in groups, the most famous example being the millions of monarchs that converge in Mexico each winter. The zebra longwing butterfly and other species in the genus Heliconius roost in small clusters of about a dozen at night, and several species of butterflies and moths shelter as groups in cool spots to escape the summer heat.

But Sourakov captured what seems to be the first-known example of moths congregating daily, apparently to sleep, a roosting behavior more commonly observed in bats, one of moths’ top predators. 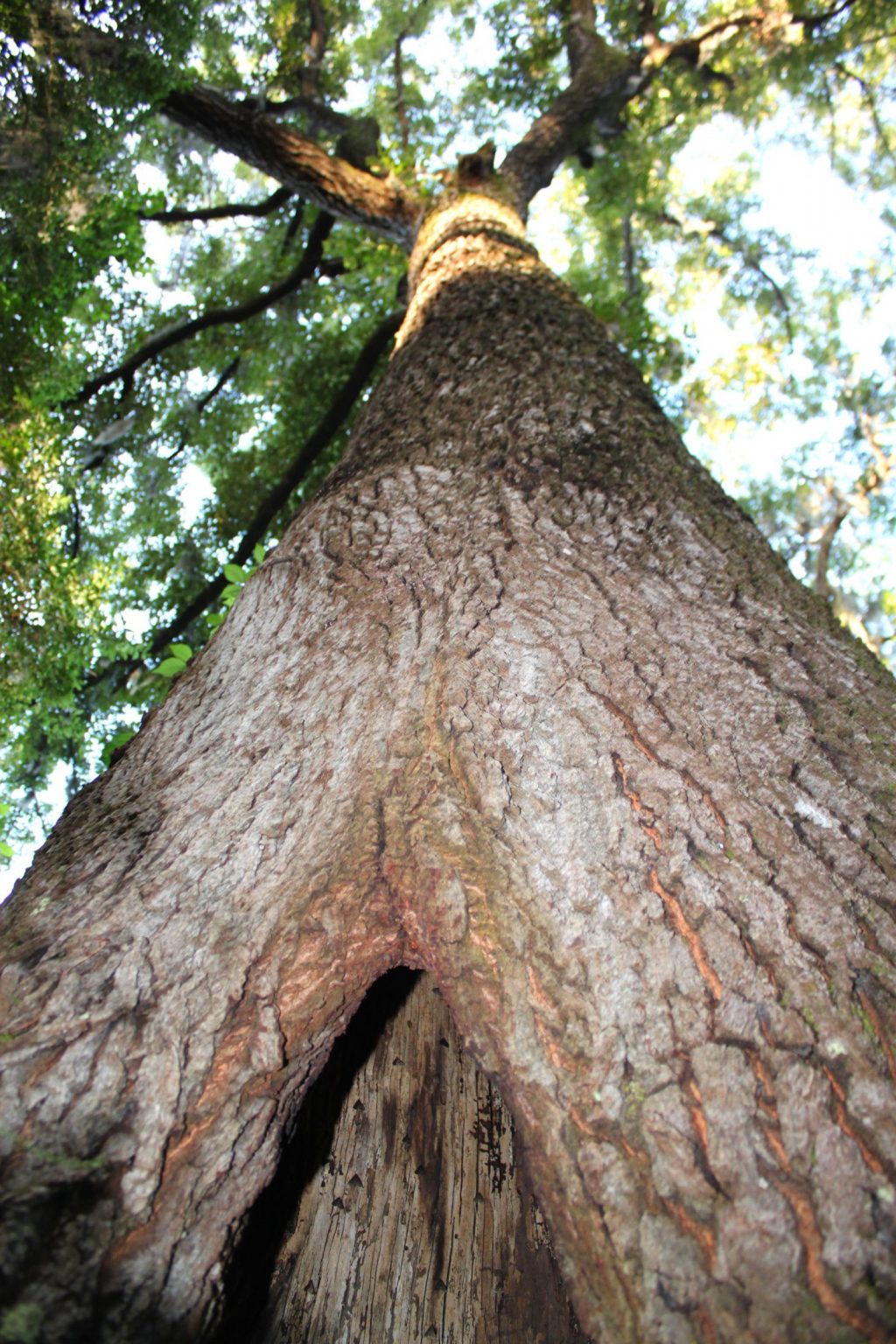 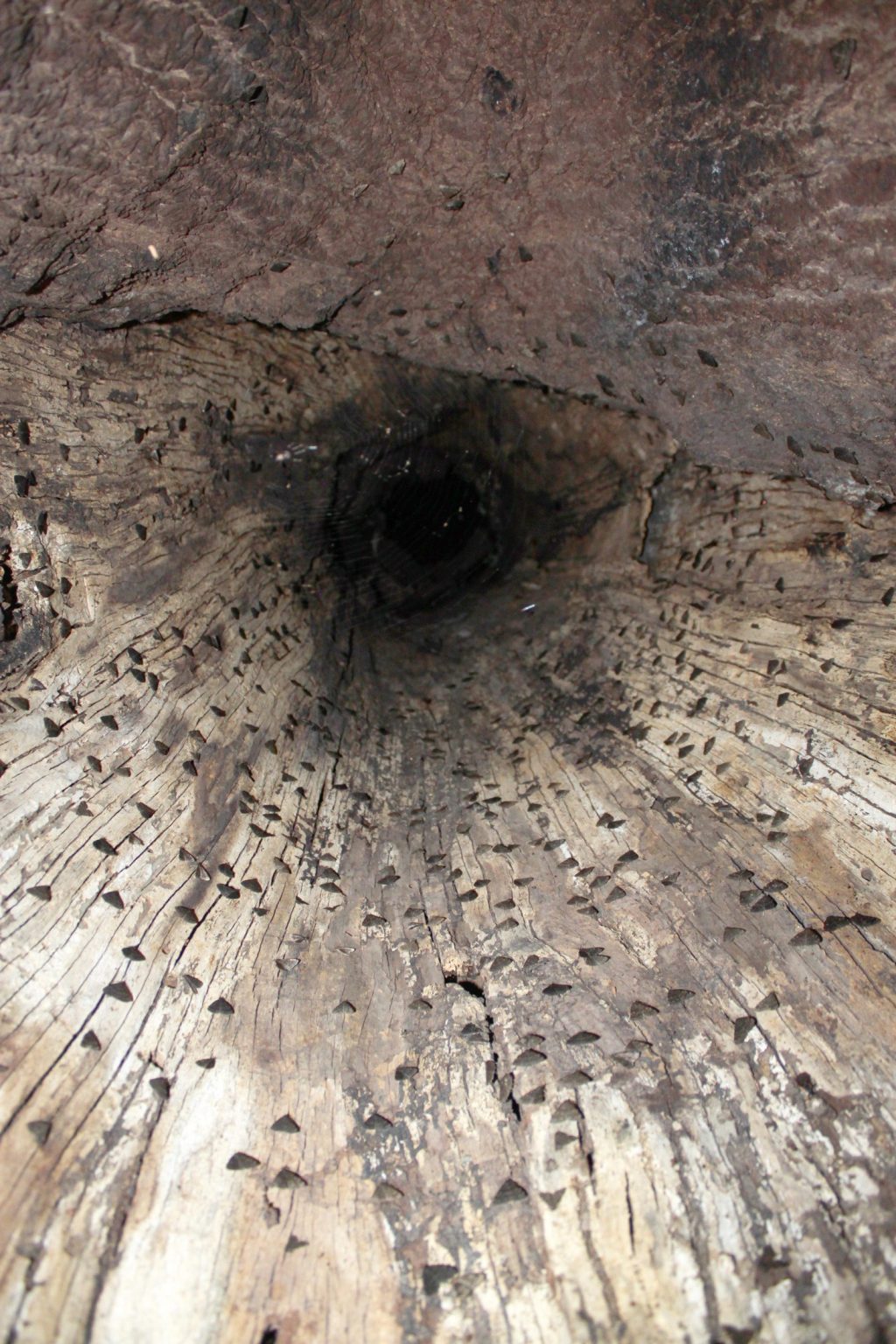 Sourakov thinks that the moths may cue in on a scent, perhaps sex pheromones, to flock only to select hollow trees, not unlike monarchs on their way to overwintering sites in Mexico. The times when the moths gather and disperse from the trees are still not known. 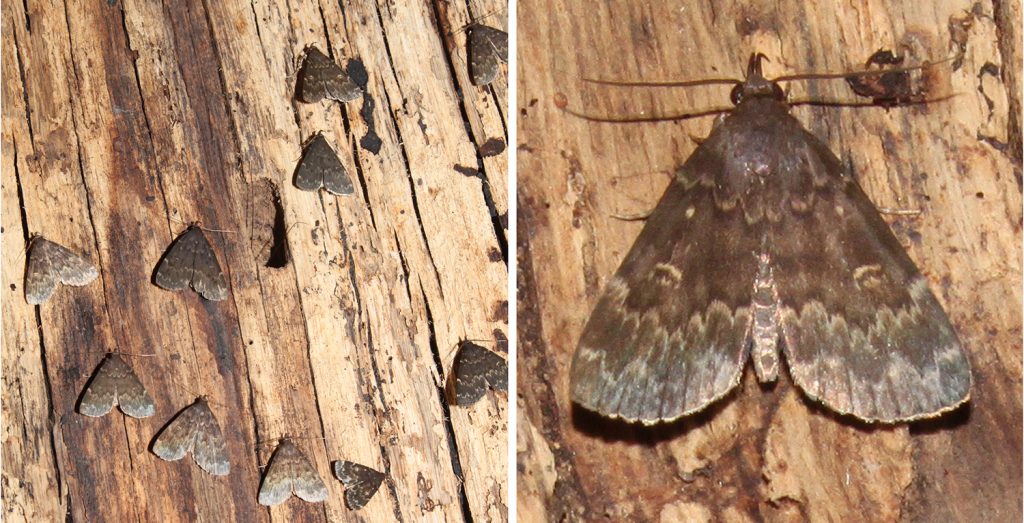 Glossy black Idia moths are nocturnal nectar feeders. Once believed to be a single species, Idia lubricalis, DNA evidence suggests that many species may have been classified under one name.

“Monarchs are the most celebrated insects in the world because of their remarkable behavior, and yet here in Florida, about 15 minutes north of Gainesville, you can find something just as interesting from the biological perspective,” he said.

Why the moths gather together is still unclear, but Sourakov thinks the behavior could be a “safety in numbers” defense strategy. By late summer, several spiders had set up webs inside the hollow red oak, but a few predators are unlikely to make a dent in a population of hundreds of moths, he said.

“Large numbers of prey in a confined space presents a challenging environment for predators,” he said. “Spiders, for instance, would have to constantly repair their webs torn by these many moths. But most importantly, the percentage of lost prey is not significant enough to undermine the population. ‘Safety in numbers’ doesn’t mean everyone is safe, but the population is safe.”

Why was Sourakov sticking his head into hollow trees in the first place?

“I wasn’t sure what I was looking for,” he said. “But on one occasion I got sprayed by hundreds of angry mating walking sticks. That sparked my interest further in what else might be lurking there.”

He first noticed a small group of Idia moths inside a hollow sweetgum tree in the University of Florida’s Natural Area Teaching Laboratory in 2010. But despite peeking into dozens of hollow trees, he failed to spot the phenomenon again until July 2017 when a hollow southern red oak tree yielded about 100 Idia moths. Returning to the tree the following spring, Sourakov recorded the mass of moths in April, May and June, culminating in the spectacular sighting of more than 400 individuals in July.

Sourakov suspects that the moths use sex pheromones as a signal for assembling and plans to continue studying them to gain further insights into their life history and behavior. This week, he discovered another tree on the UF campus with moths roosting in its hollow.

“There are so many unknowns in nature,” he said. “Even the exact identity of this moth species is unclear and is waiting to be described. You don’t have to venture into exotic places to make discoveries. Just look in your backyard. Some moths are small, brown and might seem boring, but the impact that stories like this make on a perception of a place cannot be overestimated.”