The Herbarium at the Florida Museum of Natural History is run jointly by the Museum and the University of Florida Institute of Food and Agricultural Sciences. Including the associated fossil plant collection, it houses about 500,000 vascular plants, moss and lichen specimens, plus 15,000 wood and 3,000 seed samples.

Located in Dickinson Hall on the UF campus, the Herbarium is one area of the Museum the public rarely may visit. Some visitors expect to find a greenhouse full of live, growing herbs. But the Herbarium is more like a library. Instead of books, the Herbarium contains pressed, dried plants that are carefully stored, curated and catalogued for reference and research in many areas of science.

Scientists mount the specimens onto large sheets of archival paper labeled with name, collector, date collected, geographic location, habitat and information such as common names and how the plant is used by local people. This information provides a detailed record of plant life and benefits scientists around the world working in a variety of disciplines, including biodiversity studies, economic botany, anthropology and entomology. Museums also commonly exchange and loan Herbarium specimens, much as library books are loaned for study.

Worldwide there are more than 3,000 herbaria in about 170 countries. Some, including the New York Botanical Garden, the Missouri Botanical Garden and the Smithsonian Institution, house large collections of millions of specimens. Many herbaria specialize on specimens from specific countries or plant groups.

The Florida Museum Herbarium specializes in plants from Florida and the Caribbean with specific research being conducted on the orchids, Ericaceae (blueberries, Rhododendrons and their relatives) and the Melastomataceae (a family of tropical trees and shrubs especially of South America). The Herbarium’s reference library contains more than 10,000 publications with descriptions, geographical ranges and keys for identifying plants, as well as information on the diversity and distribution of the earth’s 250,000 flowering plants species.

Researchers visit and use the Herbarium collections for many purposes, including documenting which plants now occur in Florida and which plants have gone extinct, and identifying newly introduced plants, weeds and invaders. Scientists extract DNA from herbarium specimens to study evolutionary relationships among plants. Fossil plants and pollen record the plant communities of ancient Florida and help researchers understand past and future climate change. 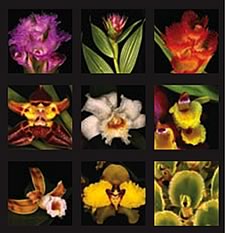 Charles Darwin once wrote to botanist Joseph Hooker “I never was more interested in any subject in my life than this of Orchids.” Orchids are perhaps the largest family of flowering plants, with over 25,000 species worldwide and 400-500 new species being discovered each year. The Florida Museum Herbarium has an active research program focusing on the evolution, classification and pollination ecology of Neotropical orchids.

Orchid researchers include Norris Williams and Mark Whitten who are using DNA sequencing to reconstruct the evolutionary relationships of many major Neotropical orchid groups. Their research forms a major part of a worldwide, collaborative reclassification of the orchids from Kew gardens in England, entitled “genera Orchidacearum.” Research associate Robert Dressler is a world-renowned expert on orchid classification who now divides his time between Costa Rica and Gainesville. Together, they mentor several graduate students working on orchid taxonomy and pollination biology, with field work being conducted in panama, Costa Rica and Ecuador.

Mario Blanco was the first to document pollination of tiny Lepanthes orchids in Costa Rica – the flowers mimic the genitalia of female fungus gnats and are pollinated by amorous males. Blanco now is working on taxonomic revisions of several orchid genera.

Lorena Endara compiled the “IUCN Red List of Threatened plants” catalogue of endangered orchids for her native Ecuador and now is focusing on the evolution of a genus of Andean orchids.

Kurt Neubig is beginning a study of the showy-flowered genus Sobralia, which includes the tallest orchid species (44 feet) and also the most short-lived flowers (a few hours). With hundreds of new orchids discovered each year and climbing extinction rates, a new generation of orchid biologists is needed to help catalogue and preserve this major branch on the tree of life.

David Jarzen is a Florida Museum palynologist and paleobotanist specializing in the study of the ancient plant life of Florida and the Caribbean.

Mark Whitten is a Florida Museum botanist studying the diversity, evolution and pollination biology of orchids. His current research utilizes DNA sequencing to unravel the evolutionary history of Neotropical orchids.