In a limestone quarry near Newberry, Fla., paleontologists and volunteers from the Florida Museum of Natural History are scrambling to finish excavating a site known as Haile 7G – one of the state’s richest fossil sites due to the sheer number of complete skeletons found in its unique sediments. But more importantly, the types of fossils being unearthed are offering paleontologists new insight into a well-documented, ancient event called the Great American Biotic Interchange, which was a period of time when animals from North and South America traveled freely between the two continents after being isolated from each other for nearly 65 million years.

Last season, nearly 220 complete skeletons were excavated from Haile 7G – some encased in plaster jackets, and some wrapped in protective tissues – and transported to the Museum’s Vertebrate Paleontology division, where they will be painstakingly pieced back together, cleaned, conserved and incorporated into the research collections. (Paleontologists consider a fossilized skeleton “complete” when at least half of the bones are successfully preserved.)

Florida Museum paleontologist Richard Hulbert said the skeletons at Haile 7G are located in a thick layer of clay mixed with limestone boulders. Most of the fossils date to about 2 million years ago, which is late in the Pliocene Epoch and just shortly after the Great American Biotic Interchange began.

Hulbert said the species found at Haile 7G – along with the region’s geology – paint a picture of a densely forested area where browsing animals such as tapirs, capybaras and sloths sought water from a nearby sinkhole lake, which was home to freshwater vertebrates like turtles, alligators and ducks. Hulbert said the absence of certain species further completes the ecological picture.

“At other sites of this age in Florida, we find more horses, pronghorn antelope, jackrabbits and other animals that we think of as more open-habitat species – but at the Haile site, they are either absent or very rare,” Hulbert said.

A fossilized porcupine discovered at Haile 7G delivered a surprise when paleontologists uncovered its prehensile tail, useful for grabbing branches high in tree canopies. It’s the first fossil of its kind to be discovered in the southeast. The modern North American porcupine does not have a prehensile tail and is better adapted for shimmying up and down tree trunks.

“So the fact that this animal has a prehensile tail tells us not only something about its ecology, but it also gives us an idea about the landscape, or at least that it’s adapted for a landscape with relatively dense trees,” Hulbert said. 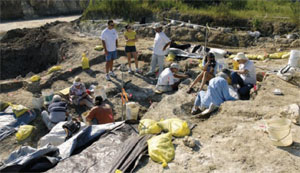 Haile 7G also is one of the world’s most abundant sources of fossilized tapirs, a horse-like animal with a body like a pig and a short, grasping trunk. Tapirs ate leafy-greens year-round, and preferred forested areas near sources of freshwater.

Rare finds from the 2006-2007 field season include a partial skull of a rattlesnake with one of the fangs intact – the oldest such specimen found in Florida. Volunteers also found a capybara; a type of large, barrel-shaped rodent. The first relatively complete skeleton from this site of an elephantlike animal called a gomphothere also was discovered.

“Gomphotheres are the third branch of the elephant family tree, as opposed to the more familiar mastodon and the true elephants plus mammoths, and are the largest in terms of geographic distribution and diversity,” Hulbert said. “The age of specimens from this site represents an interesting evolutionary period for gomphotheres.”

Fossilized remains of giant ground sloths – which grew to 15 feet tall when standing, with males weighing an estimated 3 tons – and mylodont ground sloths also have been excavated from Haile 7G. Scientists also unearthed fossilized remains of sabertoothed cats and 16 4- to 5-foot-long giant armadillo skeletons, half of which had associated skulls.

Researchers also ran into a zone that was littered with small, 3-inch long fish.

“You would slice open a bit of clay and there would be a whole fish,” Hulbert said. “And there were dozens of them.” Hulbert said it would take years of curatorial effort to process the material they collected this field season. Although the quarry owners wholly support the dig – even lending a helping hand at times with their earth-moving equipment – the site is scheduled for eventual mining.

“Basically, we’re operating as a salvage operation,” Hulbert said. “We’re not recording as much data as we would in a different situation, in the interest of getting everything possible out of the ground.”

Hulbert closed the site during the hot summer months of June through September but he reopened for the third, and perhaps final, field season in October.

“Our end of the season tally for 2006- 2007 amounted to about 220 fossil skeletons of mammals, reptiles and fish,” Hulbert said. “We know we are going to find many more skeletons of the common species, like the tapir, sloth, and alligator. But we hope to find the first skeleton ever found of some of the rarer species, perhaps a giant otter or a hyena. Both are known from this age in Florida, but only from a few bones.”

Jonathan Bloch, the Florida Museum’s assistant curator of vertebrate paleontology, also has worked extensively at the Haile 7G site. The excavation was funded by a grant from the National Science Foundation.