The Florida Museum of Natural History is expanding this month with the opening of a state-of-the-art special collections building on the University of Florida campus.

The museum has functioned as Florida’s official repository of the state’s biodiversity and cultural heritage for more than 100 years. From mammoth bones and freshwater mollusks, to ancient pottery and rare endemic plants, the Florida Museum has grown from a small collection of fossils and minerals at its establishment in the late 19th century to the more than 40 million specimens and cultural artifacts it holds today.

The new building will house the museum’s burgeoning “wet” collections, including all specimens preserved in ethyl or isopropyl alcohol.

“The Florida Museum’s world-class collection of fishes, reptiles, amphibians and invertebrates is critically important to the study of global biodiversity,” said Florida Museum director Douglas Jones. “The newly constructed Special Collections Building provides a modern, accessible and safe environment for these collections to grow and support biodiversity research as well as undergraduate and graduate student training in the 21st century.”

The building was designed and constructed by The Haskell Co., an architectural, engineering and construction firm based out of Jacksonville, Florida, and marks the first time the company has collaborated with UF. The project cost approximately $13 million and took just under two years to complete.

The two-story floorplan offers 23,000 square feet of mobile, compact high-density shelving systems, research laboratories and office space, providing ample room for the continued expansion of the wet collections. The vacated space where they’re currently stored in Dickinson Hall will additionally allow for the continued acquisition and study of other biological, paleontological and archaeological specimens and artifacts.

Over the course of a year, the museum will move its wet collections from Dickinson Hall to the new building, beginning in late September with invertebrate zoology (marine and freshwater invertebrates) followed by herpetology (amphibians and reptiles) and rounded out by ichthyology (fishes).

All told, roughly 4 million specimens stored in 60,000 gallons of ethanol or isopropanol will make their way to the Special Collections Building, a leviathan task that will be carried out after years of anticipation and careful preparation. The ichthyology and invertebrate zoology collections are both the second largest of their kind in the United States, and the herpetology collection ranks among the top 10 in the nation. 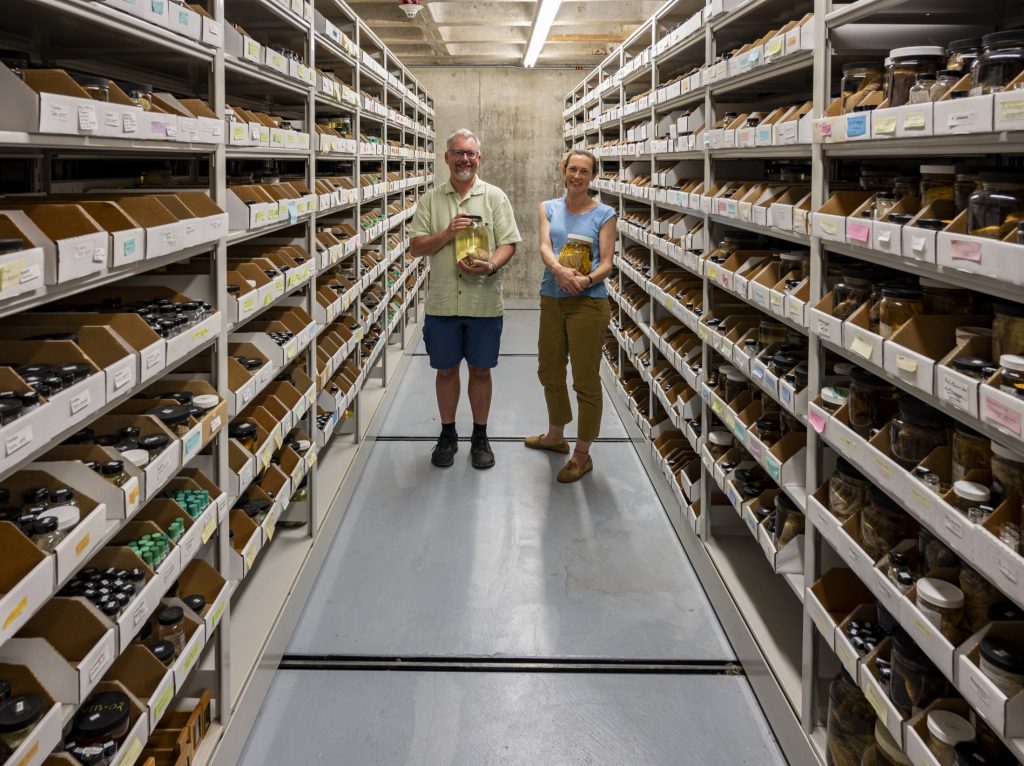 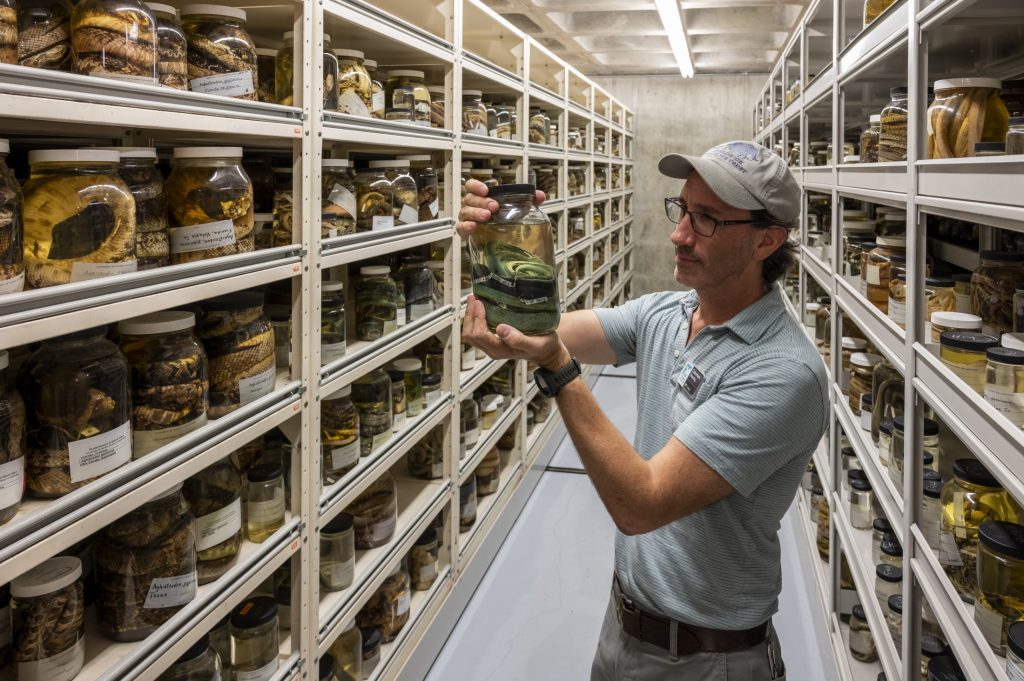 Coleman Sheehy is the collection manager for herpetology, which holds some 200,000 amphibian and reptile specimens. 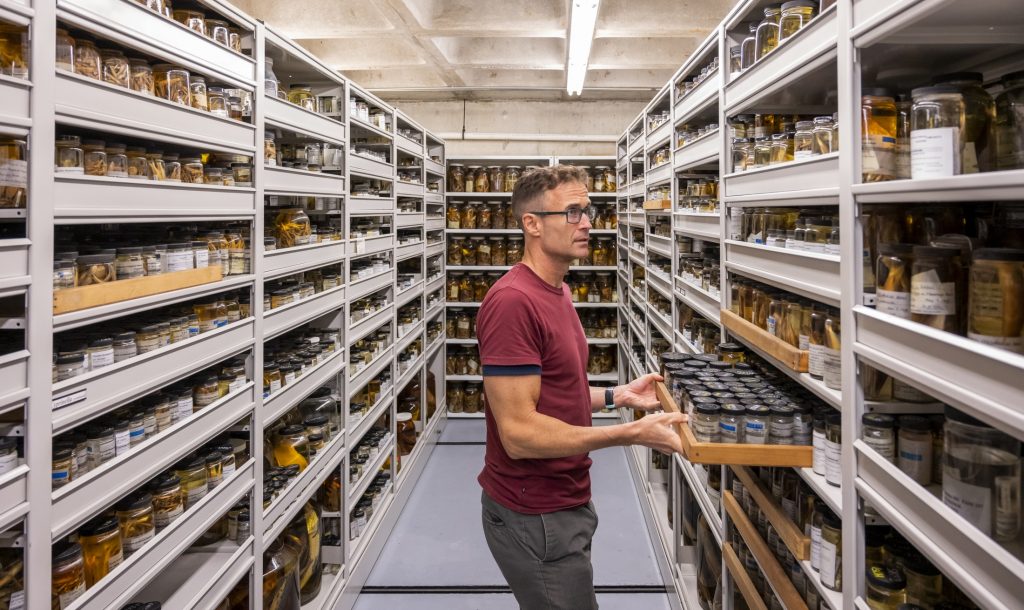 Rob Robins manages the ichthyology collection at the Florida Museum, which collectively holds millions of freshwater and marine fish specimens.

Although the large bulk of specimens in the wet collections are from Florida, others were recovered from nearly 300,000 different locations around the world. The organisms are similarly studied by researchers the world over. Each year, the Florida Museum’s wet collections loan approximately 18,000 specimens to researchers and institutions that use them to make new discoveries.

The information that can be gleaned from the museum’s wet collections is practically endless, and their value only increases as technology improves. In 2020, CT scanning technology revealed that at least 11 fish species have the ability to walk on land, a feat previously thought to be restricted to a single type of blind cave fish.

The collections also function as an inventory of Florida’s biodiversity, including the dwindling stock of some native species and the influx of invasives. Last year, researchers from the U.S. Fish and Wildlife Service used Florida Museum specimens to inform their assessment of a freshwater mollusk once thought to be extinct, leading to the designation of protected habitat along 190 miles of north Florida streams and rivers. In partnership with the National Park Service, Burmese pythons extracted from The Everglades are curated in the herpetology collections, where researchers hoping to stop the spread of this invasive species can study aspects of their anatomy and physiology.

The collections figure prominently in the museum and university’s science and education-based programs and generate millions of dollars each year in grant-funded research. Museum faculty also train hundreds of University of Florida undergraduate and graduate students each year. The expanded space will create additional opportunities for students to have hands-on experiences working directly with specimens that are critical to the study of biodiversity, climate change and environmental health.

“We welcome the completed addition of the Special Collections Building to ensure the preservation and growth of the Florida Museum of Natural History’s collection of biological specimens. It is a unique treasure for naturalists and scientists from around the world,” said University of Florida Provost and Senior Vice President for Academic Affairs Joseph Glover.