More than three centuries before initiatives to increase the number of women in STEM fields, 52-year-old Maria Sibylla Merian sailed across the Atlantic on a largely self-funded scientific expedition to document the animals and plants of Dutch Suriname.

Born in Germany in 1647, Merian was a professional artist and naturalist whose close observations and illustrations were the first to accurately portray the metamorphosis of butterflies and moths and emphasize the intimate relationship between insects and their host plants.

Now, a new Central American butterfly species has been named in her honor.

Catasticta sibyllae is a rare, black butterfly known from only two male specimens found in Panama decades apart. One had been stowed, unidentified, in a drawer at the Smithsonian National Museum of Natural History since 1981. The other was collected in May.

“Since this is such a distinctive butterfly, we wanted to name it after someone who would deserve it,” said Shinichi Nakahara, the study’s lead author and a lepidopterist at the Florida Museum of Natural History. “Merian was centuries ahead of her time, and her discoveries changed the course of entomology. The fact that she accomplished so much against all odds – as a divorced woman in the 17th century who taught herself natural history – is remarkable. And she did it so beautifully.” 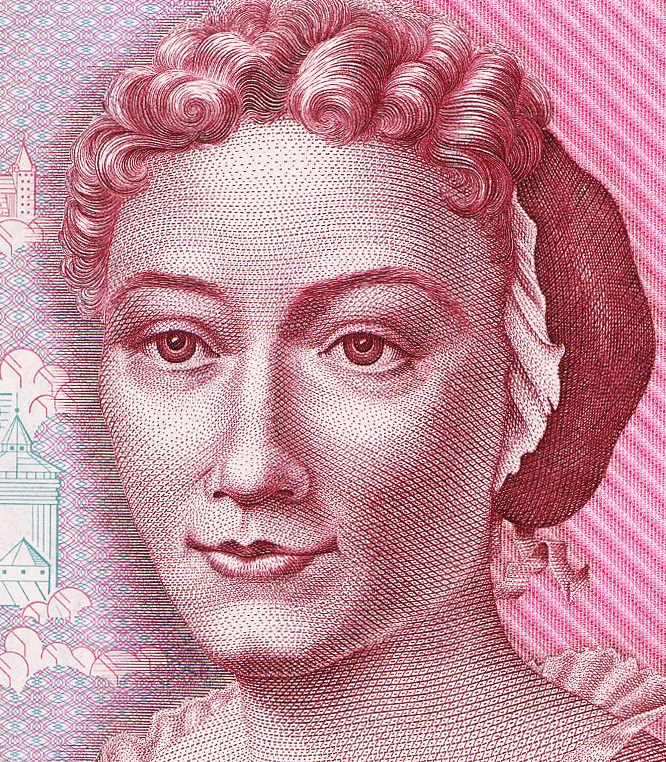 Germany’s 500 DM bank note was embellished with a portrait of Maria Sibylla Merian, who was born in Frankfurt. 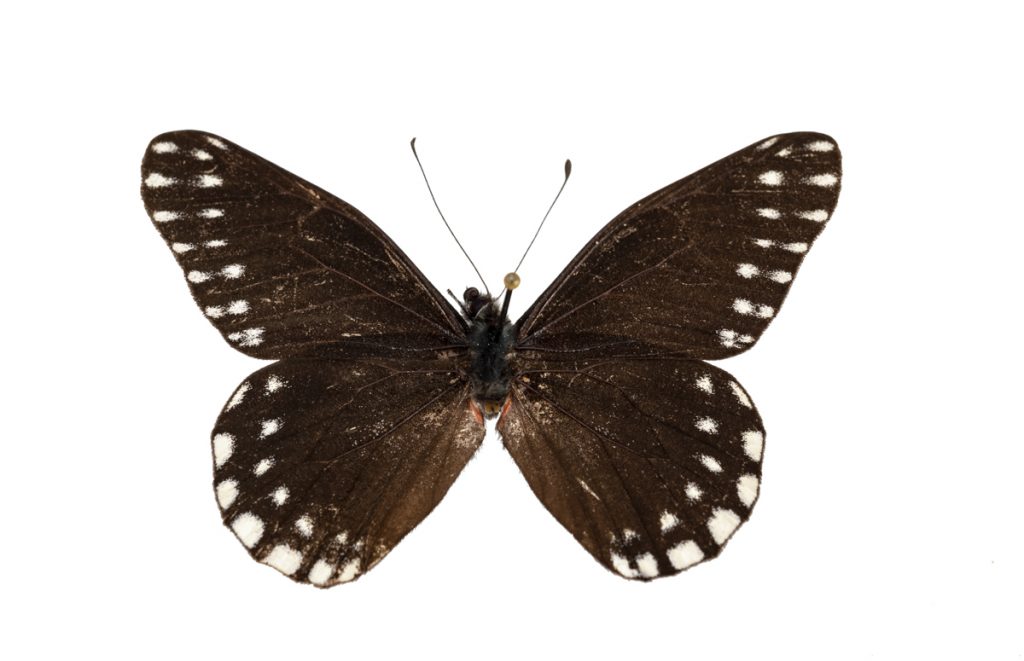 This butterfly is the holotype of Catasticta sibyllae, the specimen that officially represents the species. Collected in 1981, it lay unidentified in a drawer at the Smithsonian National Museum of Natural History until this year.

Two subspecies of butterflies have previously been named for Merian, but to Nakahara’s knowledge, this is the first butterfly species named in her honor.

Her other namesakes include the Cuban sphinx moth, a species of cane toad, a snail, the Argentine black-and-white tegu lizard, a bird-eating spider, a genus of praying mantises, a genus of exotic flowering plants, a bug, the African stonechat bird and a species of bugle lily.

But Merian’s first love was butterflies and moths, and like many entomologists, the obsession struck early. She began collecting insects in her youth and raised silkworms as a teenager. After realizing that other caterpillars also produced beautiful butterflies or moths, “this led me to collect all the caterpillars I could find in order to observe their appearance,” she wrote.

Artistically trained by her stepfather, a still-life painter, she drew and painted her observations, publishing her first book of illustrations at age 28 and following this with a two-volume set on caterpillars that showed the metamorphosis and host plants of 186 species. At a time when many naturalists believed insects were the products of spontaneous generation, Merian’s work was the first to show their complete life cycles, from eggs to adults. 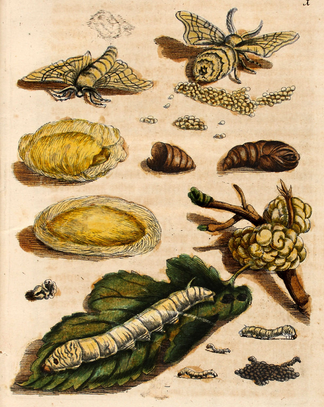 This illustration by Merian depicts the life cycle of silkworms. Many naturalists of Merian’s time believed that insects were the result of spontaneous generation. Merian was the first to accurately document metamorphosis. 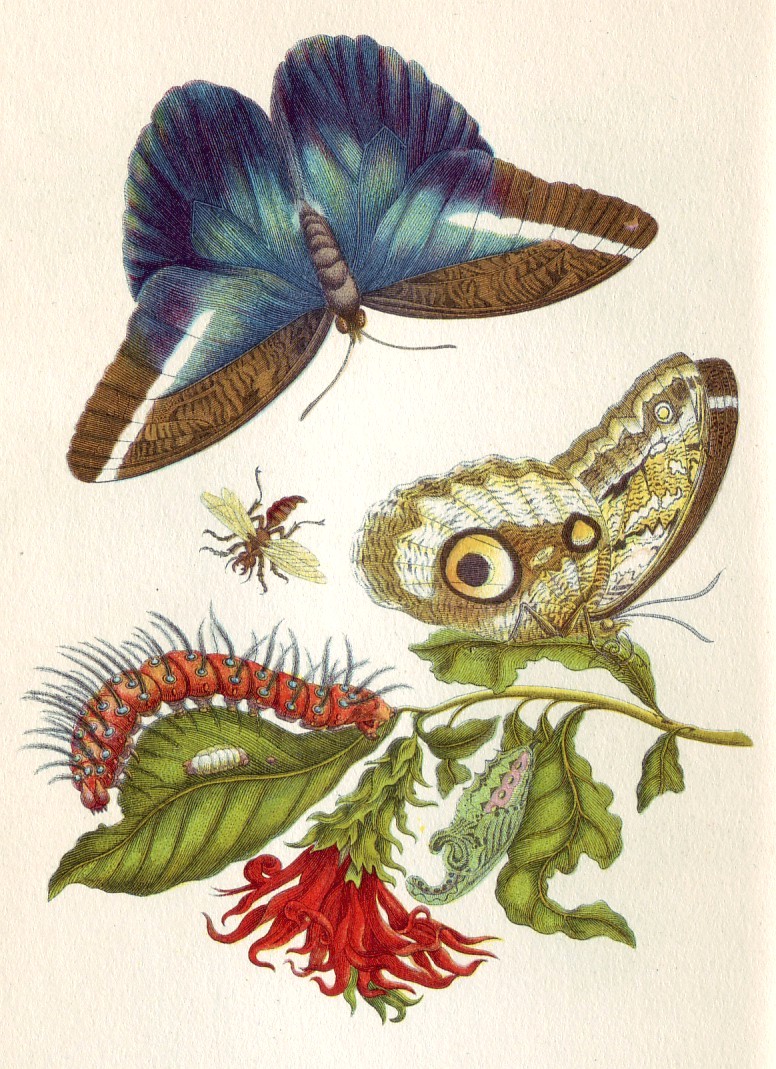 This plate from Merian’s seminal work “Metamorphosis insectorum Surinamensium” shows the life cycle and host plant of the iconic blue morpho butterfly, one of more than 90 animals documented by Merian on her expedition to Suriname. 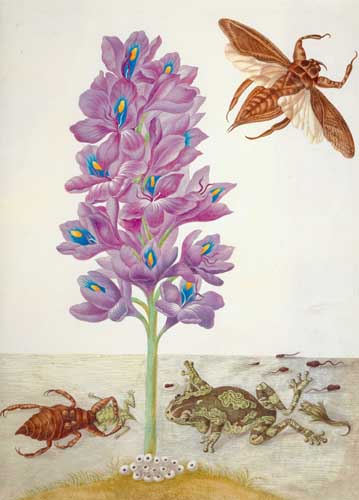 Merian’s work was remarkable for showing animals in their ecological context. This illustration depicts the life cycle of frogs, with eggs laid at the base of a water hyacinth and a water scorpion preying on a young frog.

While collecting butterflies was a common hobby for women of Merian’s class and era, science was reserved for men. Nevertheless, Merian was not content to merely illustrate live insects but also noted their habits, life stages and interactions with other species. A self-taught scholar, she learned Latin and studied natural history while living with a religious sect for several years, and after her marriage ended, she earned a livelihood by selling her artwork.

She carefully recorded and depicted hundreds of species, several decades before Carl Linnaeus introduced the modern system of scientific classification. Linnaeus and other scientists would later use Merian’s descriptions to name and describe about 100 species.

Amsterdam granted her a permit to travel to the then-Dutch colony of Suriname in 1699, and she sold 255 of her paintings to underwrite the expedition. Her subsequent volume on Suriname’s flora and fauna described 60 species of plants, including the pineapple, and more than 90 species of animals. Notably, she often illustrated animals in their ecological context, depicting leafcutter ants defoliating a plant and a tarantula feeding on a hummingbird.

The artwork in her Suriname study journal was executed with such detail and accuracy that modern entomologists could identify 73 percent of the butterflies and moths to genus and 56 percent to species. 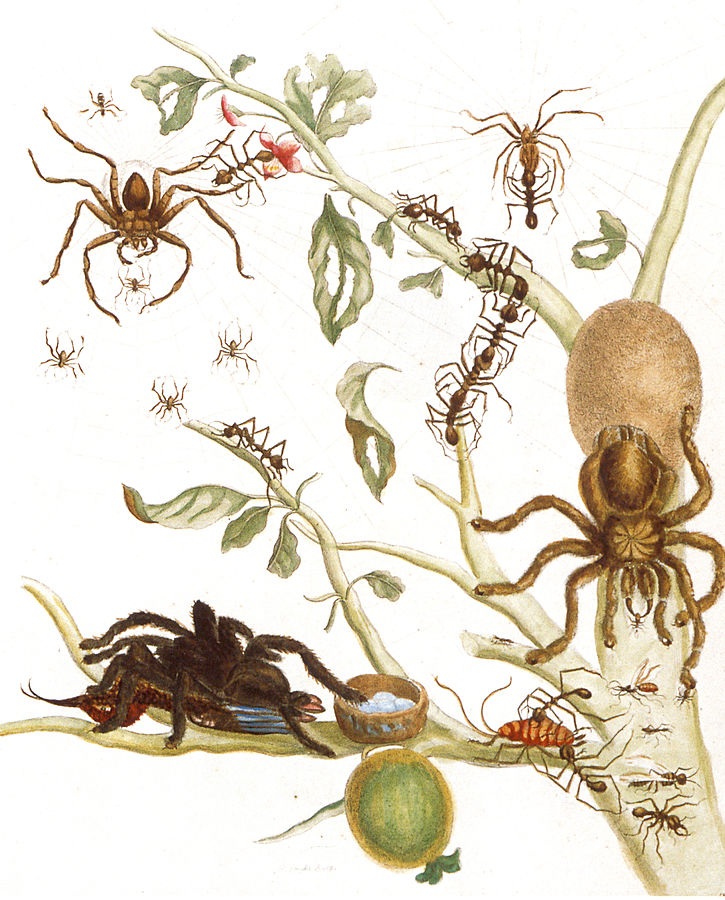 One of the most well-known plates from “Metamorphosis insectorum Surinamensium” shows a fierce cycle of predation. One spider feeds on a hummingbird while another guards an egg sac, as leafcutter ants strip the foliage from a guava plant and attack a cockroach. 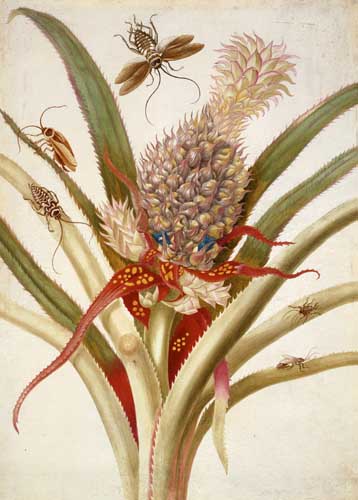 Merian used indigenous words for Suriname’s plants, such as “ananas” for the pineapple.

Merian also published works in German and Dutch, which allowed lay readers unprecedented access to scientific discoveries, arguably making her one of the earliest science communicators.

When Nakahara learned about Merian’s significant contributions to entomology, he thought “she would be a very good person to name this unique butterfly after,” he said.

The butterfly first came to Nakahara’s attention via former University of Florida graduate student Pablo Sebastián Padrón, who was examining the Smithsonian’s collection of pierid butterflies when he came across an unusual specimen he could not identify. He snapped a picture and sent it to Nakahara at the Florida Museum’s McGuire Center for Lepidoptera and Biodiversity.

“I didn’t know what it was,” he said. “I told him it could be a new species, but it looked so bizarre. It could have been an aberration. We just wanted to wait for an additional specimen.”

Most Pieridae, a large family of butterflies, are colorful with a wide variety of wing patterns, Nakahara said. But Catasticta sibyllae is a dramatic black with simple rows of white dots lining its wings and tiny flares of red where the wings join its body. Several physical characteristics marked it as a pierid, but the coloring was unlike any other pierid species Nakahara or Padrón had seen. 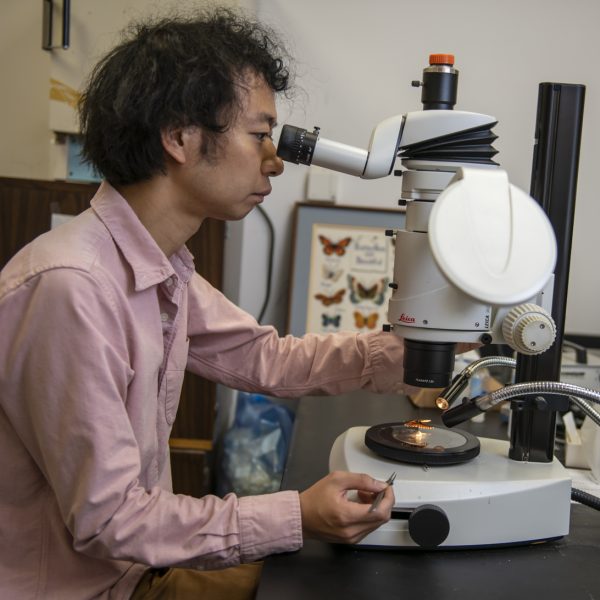 One common aberration in butterflies and moths is melanism, an unusual darkening in color, which is why Nakahara and his colleagues were unsure if the distinctive black specimen found at the Smithsonian was a new species or a melanistic individual of a known species. The discovery of a second specimen and DNA barcoding confirmed the butterfly was an undescribed species. 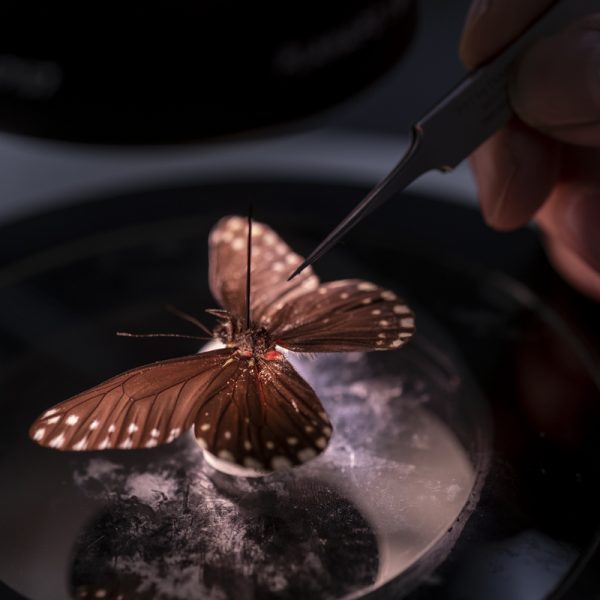 The holotype of Catasticta sibyllae is stored at the Smithsonian while the second specimen found in May is housed at Mississippi State University.

By a stroke of luck, Mississippi State University entomologist John MacDonald found a second example just a couple of months later. Not knowing of Padrón’s specimen, he sent Nakahara a photo of the same species from a collecting trip in Panama.

“The first thought that came to my mind was that we could sequence its DNA,” Nakahara said. “I immediately wrote back and was like, ‘Hey, can you send me a leg?’”

The DNA extracted from the leg confirmed that the two pierid specimens were an undescribed species. Both were found at lower elevations, outside of the family’s usual Andean range, and both males were alone, unusual for butterflies in the Catasticta genus, which tend to congregate in groups.

The researchers found no other C. sibyllae specimens in 14 museum collections, and MacDonald’s 29-month survey of the area where the second specimen was collected did not uncover any other examples, suggesting the species is extremely rare.

The study was published in Zootaxa.